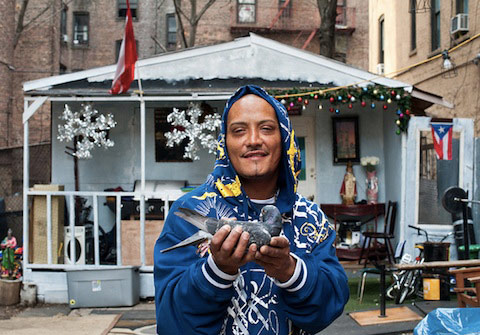 The Bronx pigeon guys are more scattered than those in Brooklyn, but if there is a center, it’s East Tremont. That’s where I found Jesus, in front of a stand alone house nestled amongst huge bulking apartment buildings. It’s an architectural anachronism—a rural Puerto Rican home complete with chickens in the heart of the Bronx. Jesus was returning with a captured pigeon, bringing it to the coops he keeps on a nearby apartment building where he is the super.

Photographer Chris Arnade has described New York City’s pigeon keepers as “true artists, creating beauty where few expect to find it.” And indeed, with feathers and flight as their media, these men from the jagged neighborhoods of Bushwick, Bronx, and East New York create mesmerizing tableaus of birds swirling in the sky.

Pigeon keeping was brought to New York by Italian immigrants in the early 1900s, and although its number of enthusiasts has dwindled, the passion with which they delicately tend to their flocks is alive and well. Now it’s mostly Dominican and Puerto Rican men—as shown here in Arnade’s series Pigeon Keepers of NYC—who breed and collect the birds, which they keep in hand-built rooftop coops. When it comes time to fly the flocks, the birds take to the sky, synchronized as if performing a ballet, treating their keepers and passersby to moments of spectacular grace all too rare in the chaos of city life below. 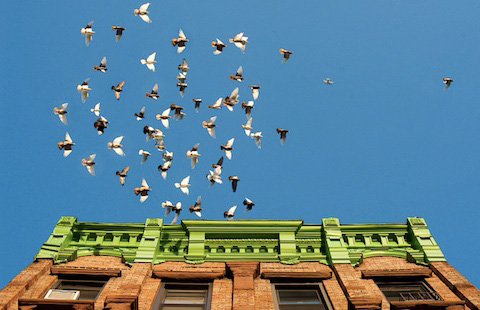 Goodwin’s flock over his house near sunset. 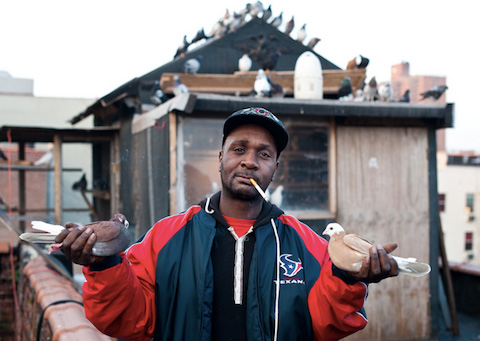 Shy, 46, born and raised in the projects of East New York, fell in love with pigeons when he was six. “I was always watching them. I got sent to a camp one summer and spent most of the time watching the birds.” In his late teens he got into drugs, dealing and smoking crack. It ended with 11 years in jail for manslaughter, the result of a deal gone bad. He was released in ’99 and has been clean since.” Jail changed me. I saw guys in there who ain’t ever coming out. Ever.” Now he does some odd construction jobs, spending most of his free time on the roof of an abandoned building where he keeps his birds. “I got no need for attitude anymore. That’s all gone. I am just happy sitting up here tending to my birds. I ain’t got much else, but when I am up here I can be happy and hope something better comes the next day.” 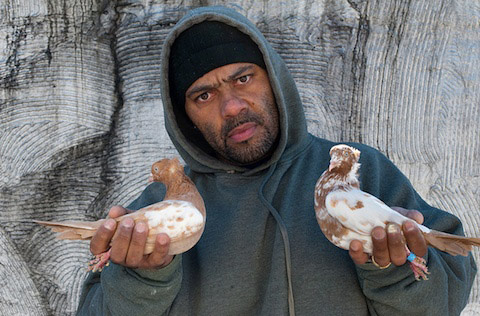 Slice, 40, has been keeping pigeons since he was 13. Raised by a single mother, he started dealing drugs at 16. Two years later he was sentenced to 14 years in jail. After being released he met his wife. Now he manages three buildings in East Tremont, Bronx that house AIDS patients. When I asked him if prison helped reform him he said, “Ha! Prison is a racket. They just want to keep recycling you. I helped myself by deciding I ain’t ever going to be part of that racket again.” Now he is “locked down by my wife and birds. Both of them keep me out of trouble. When I am up here on the roof, I am in another world. I can leave all the past behind. All that below us, that’s gone.” 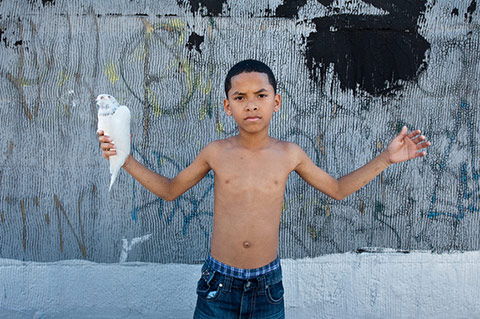 Delon spends time on his Uncle Luis’ roof in Bushwick, helping with the pigeons. He says he used to be mostly a snake and lizard kid, but is now becoming a pigeon guy like his uncle. His uncle taught him how to catch and hold a pigeon recently, so he had to show me. 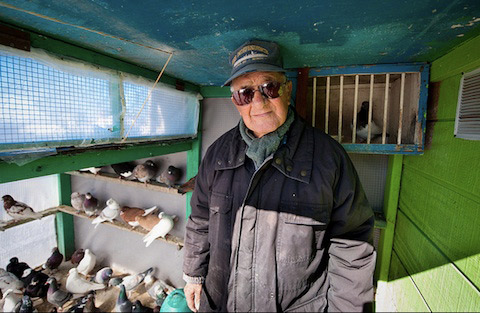 Johnny, 86, has been keeping birds in Bushwick since he was a boy. Goodwin brought me to meet Johnny, who keeps his birds on one of Goodwin’s roofs. Asked why he gave Johnny the space for free, Goodwin said, “He is a good person, and the birds are what keep him happy now.” Climbing the ladder to the roof was a chore for me, but Johnny’s age does not seem to slow him down. He has a small collection, but they are all gorgeous. 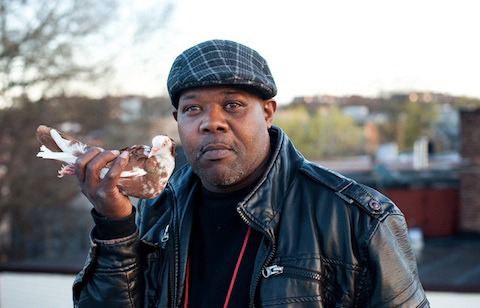 Kevin, 45, started keeping pigeons at the age of nine. He and Mike Tyson grew up flying pigeons together in their Brownsville neighborhood. Kevin spent his entire life in Brownsville, and has worked for the parks, sanitation, and now the housing department. When he was younger he “had a few problems. Growing up here it’s hard not to, but that’s all behind me now. God is now shining his light on me.” For the last 15 years he has “stayed away from everything. Now I spend my evenings on the roof with my birds and a Pepsi. The pigeons don’t talk back to you and my wife always knows where I am. I can put everything behind me when I am up on the roof.” 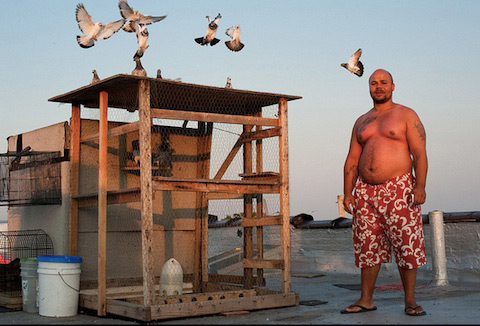 Mike, 37, grew up on the Lower East Side, one of fourteen children of a mother addicted to heroin. He was taken from her at the age of eight and put in group home until 13. Soon after he returned, she died of AIDS. He spent the next year homeless, living in flop houses, short stay motels, and abandoned buildings dealing drugs to try and clear $57 a day. “That way I could stay in a room where I did not have to share a bathroom. In those places you never knew what or who you would find in the bathroom.”

He was eventually given four years in juvy. “It was my only time. I learned I never wanted to be there again.” He has been keeping birds since a child, a way to relax and stay away from drugs. “I have never used. I know what it does.” Up on his roof in Hunts Point, with views of Laguardia and Manhattan, breezes blowing above the taut humid streets below, watching pigeons catch the light, I viscerally understand this old sport. “My wife, three kids, my birds. That’s all that is keeping me alive.” 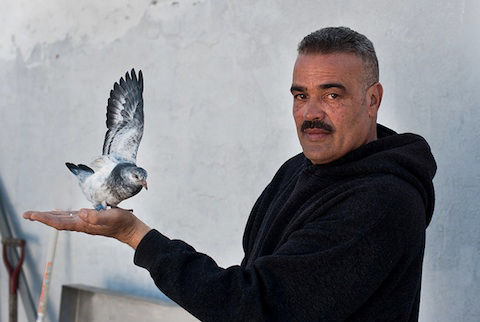 Rubin called me this week and told me I had to come up and see something amazing. One of his pigeons had given birth to a baby with only one wing. Both Rubin and Vinny, life-long pigeon keepers, had never seen anything like it in over 40 years of flying and breeding pigeons. They let me know that they were going to do everything they could to make sure the pigeon stayed healthy and safe. When the mothers start trying to push the babies out of the nest (in a few weeks) they will transfer this one to a special cage they built. They still haven’t come up with a name yet, although they are leaning towards “Lefty.” 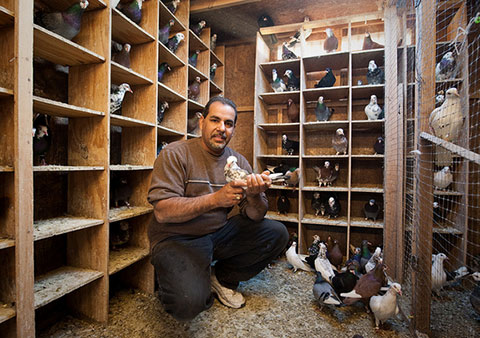 Willie is the super in the building where he keeps his pigeons. Presently he has the most pigeons in Bushwick. Here he is inside one of his three coops.