A Complex Portrait of Fatherhood in East New York 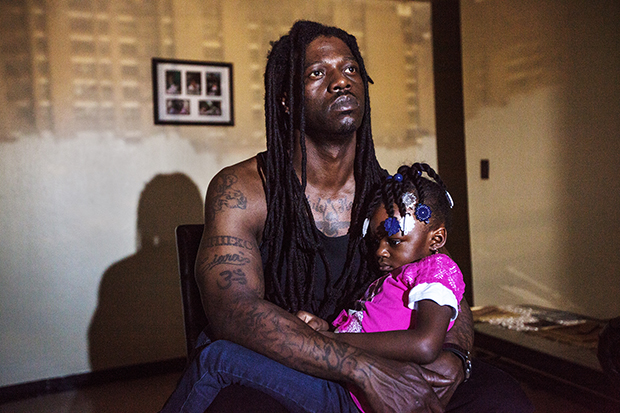 Raheem Grant, 39, poses for a portrait with his daughter, Nature Grant. “When I was growing up I didn’ t have a father. My little one, she gets scared of the dark: ‘ You don’ t have to be scared because Daddy is here.’ Just knowing that I am there for them makes me feel like I accomplished a lot.

After spending time in a little-known Brooklyn neighbourhood, East New York, Phyllis Dooney began a project on fatherhood. The area is rife with poverty – a third of residents live below the Federal Poverty Level – and dogged by the ghosts of incarcerations and “the War on Drugs”. The family dynamic is a markedly unusual one, with children spending time variously at different family members’ houses in a “communal child-rearing effort.”

Dooney aimed to challenge preconceptions about the “Deadbeat Dad” and demonstrate fatherhood as complex and nuanced. In deciding to create an image that reflected the subjects’ dialogue with, and influence by, their surroundings, she shot in homemade camera obscuras (a technique which involves blocking out all light sources from a room, then creating a pinhole which then projects the exterior surroundings inwards – this phenomenon is the principle from which photography, and the modern camera, is derived) which projected the neighbourhood across her subjects. The results of her portrait sittings, that necessarily took place in the dark and quiet of an almost completely blacked-out room, are tender and intense. Her images seem to present these East New York fathers as masculine Madonnas, with their children in their arms and facial expressions of peace and resilience. 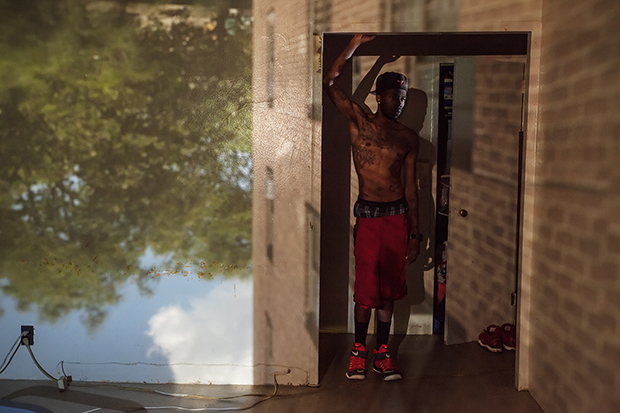 Kelvin McJunkin poses for a portrait in East New York, NY on July 25, 2015. “The first time I can remember meeting my father he came to my grandmother’s house, pulled me to the side, and told me that my mother got killed. After that I went into the foster care system. I would die and come back to life before I let anything like that happen to my daughter.”

How did you initially get into contact with your subjects? Did you form relationships with your subjects over the course of the project? Are you still in touch?
I began working in East New York, Brooklyn in 2011 on a story about a local marching band, The Soul Tigers. My affection for the neighbourhood grew from there––I have maintained relationships that have led to more relationships. So when it came time to shoot this project, I had a network of friends and colleagues to reach out to. I could not have done it without the kindness of Kelvin McJunkin and of Prince David Pierce and Brother Mitchell from ManUp! Inc. And, absolutely I keep in touch! Particularly with Kelvin, who is featured in one of the images and who is the subject of another, more long term project of mine. At this point, he is a dear friend. 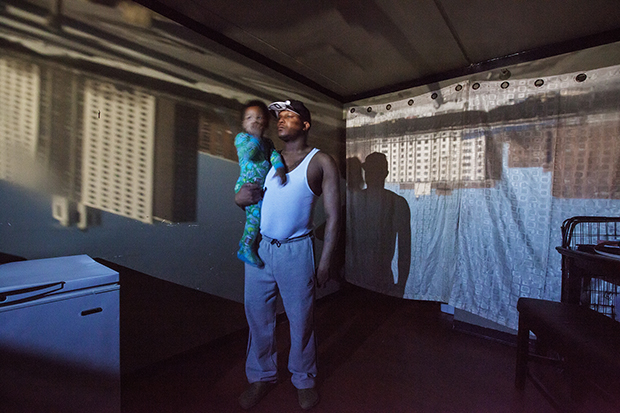 Joshua Mann poses for a portrait with his son, King Joshua Mann, in East New York, NY on March 29, 2015. “I’m just gonna keep my son strong to me. He’s like my best friend. He’s gonna be stuck to me like glue. I can’t let nothing happen to him. I’d let it happen to me before it’d happen to him. I can’t be subject to my son out here being shot, stabbed or however they go.”

Could you describe your photographic process? How did your subjects feel about your photographing them?
The process varied from person to person but what each portrait session had in common was that it took roughly 30 minutes to set up the camera obscura (which entails blacking out all of the light sources, mainly windows, with black plastic and gaffers tape and then creating a pinhole). I’d then set up the camera on a tripod. Usually there was only one, maybe two options, for where the camera could go because it was dependent on where the camera obscura was landing as a backdrop. I shot with my Canon 5d Mark II, with a 16-35mm lens, usually on F4 for a 1–4 second exposure. Which means the subject, sometimes a new acquaintance, had to put up with me coming into their home in a very invasive way (the plastic wrap, for example) and they had to sit in virtual darkness for these long exposures, oftentimes with restless children in their arms. Needless to say these men were amazing in their patience and tolerance for me! After I felt I had gotten a shot, if time permitted, we would do an audio interview. It was very moving for me and I think – I hope! – for them too. 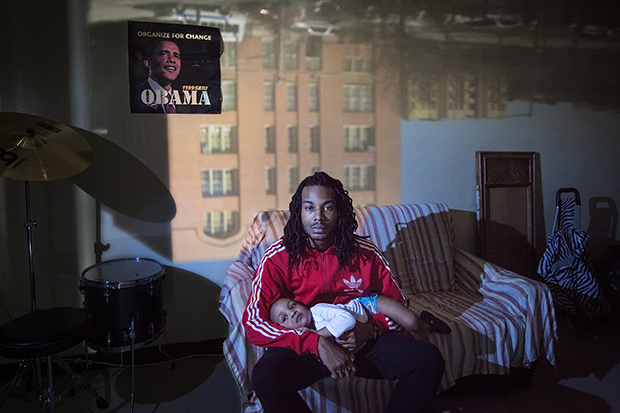 David “Prince” Pierce poses for a portrait with his son, Prince David Pierce, in East New York, NY on March 29, 2015. “I think about this all the time: who am I doin’ this for? Can I really make this work with his mother or am I just running away from it ’cause I still want to live my life? I don’t want to be tied down. I know a lot of cats that didn’t see 21, didn’t see 25, didn’t see 30.”

Had you worked with camera obscura techniques before this project? What gave you the idea to use them for the series?
I had played around with camera obscura for fun in the past but I had never used it in a formal project. This topic – fatherhood in East New York – was an idea that had been gestating for a while. I knew I wanted to achieve a dialectic image with both complexity and simplicity. The idea for adding the effect of camera obscura came in a lightbulb-style moment. It solved many problems. For one, it visually telescoped the streets and these domestic spaces onto a single image. Secondly, it set the tone for an intimate experience. The subject and I were situated in this magical setting together while contemplating complicated and personal topics. This is the kind of multi-layered process that lends itself to a compelling portrait.

What or who were your aesthetic inspirations for the series? Why are you drawn to photography as a medium?
Many people ask me if Abelardo Morell’s images were the source of inspiration for these, but actually I find that “inspiration” is not as linear as that. I would say that Trent Parke’ s work more directly inspired this series in that I am enamored by the way he plays with light. Parke’s images feel like a performance to me, something I applied to this series. For me, these images are a record of an event that took place. That is why photography is so incredibly fascinating to me: a single plane can encapsulate an experience that is made up of natural elements like light, for example, along with elusive and “invisible” contributors like the chemistry of the people who are inside and outside of the frame. 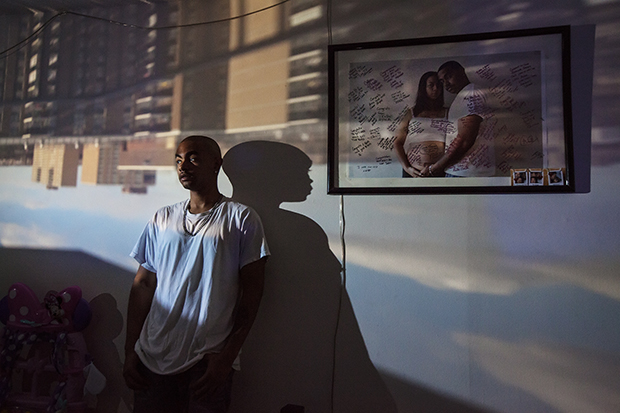 All images (C) Phyllis Dooney, with thanks to Narratively.