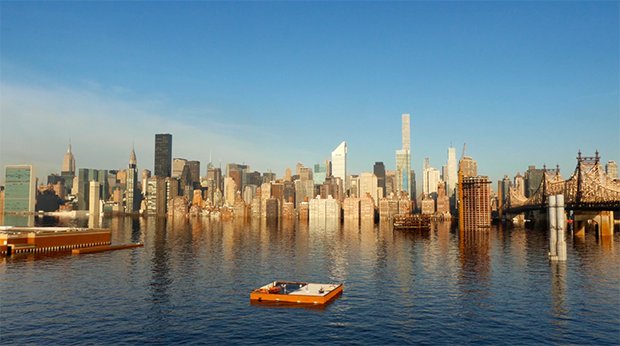 The opening shot of Two°C – New-York City, a short film by Claire & Max, looks a bit like a Hiroshi Sugimoto photograph: serene tranquil water meets the horizon. A few seconds in, we realize this isn’t a film about sublime, pristine nature. It’s the opposite. This is no natural body of water; it’s a flooded, polluted Manhattan. The waters engulf Grand Central, the New York Public Library, Times Square. There is no human presence to be found throughout the city.

Claire & Max’s alternate vision New York City doesn’t belong to the realm of science fiction. In fact, if global warming continues to accelerate the way it has over the last decades, this could very well be the future of the Big Apple. The filmmakers based the animation on recent events and research. As part of the Paris Agreement on Climate Change, 195 nations vowed to keep global temperature rise within the next century to under two degrees Celsius. Still, as Claire & Max remind us, leading climate experts, including Columbia Univeristy’s James Hansen, believe that won’t be enough to curb impending disaster.

While New York is not yet submerged, Claire & Max’s scenario is happening in real time and in real places. Photojournalist Vlad Sokhin has documented the catastrophic effects of rising sea levels in the Pacific Islands. Dae Sung Lee photographed the sinking island of Ghoramara, eroded away by the water. Diane Tuft has chronicled the melting arctic sea ice.

I asked Claire & Max why there were no people in Two°C – New-York City. I wondered: Had we all left? Where had we gone? Did we drown? They didn’t give me a definite answer.  “We do not explain why there is nobody left,” they told me, “we let the viewer imagine his own reason.” We asked them to tell us more about the film. 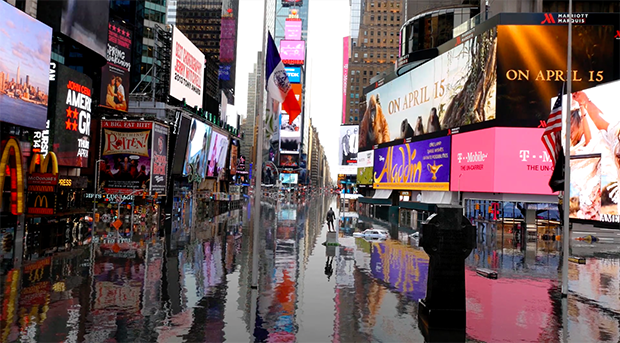 What were the logistics of shooting the film?
“We used a Lumix Panasonic GH4 with a tripod, as well as a Gorilla Pod, because on some rooftops, tripods are prohibited. The high-views come from the Empire State Building, the Marriott Hotel Times Square, the rooftops of the Refinery and Pod39 hotels. Everyone can access these places. Afterward, the work was done in post-production: we deleted all the people, and the water is a 3D simulation.” 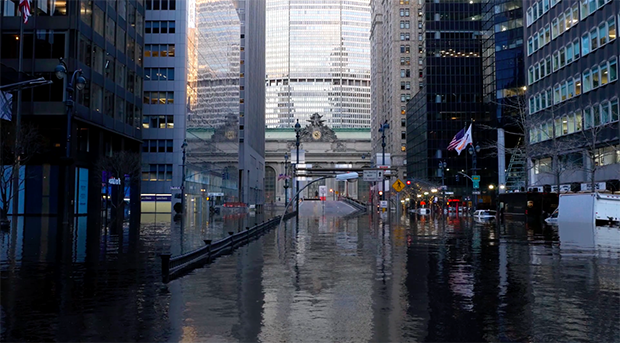 Was it emotional for you to produce or even to watch the final film? Do you have any particularly powerful memories from the process?
“We remember the time we simulated the first flood plan in Times Squares. We were impressed by the result, especially because we could simulate several levels of floods: 1 meter, 3 meters, or 5 meters. The result was very distressing because it was an unprecedented vision that we had never seen before.” 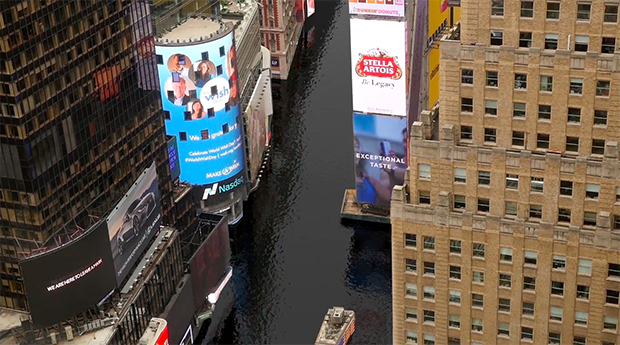 Why did you choose to film specific locations?
“We decided to film some emblematic places in NYC, mainly in Manhattan. The goal is to communicate a powerful message, a message that is important to us. We also want to make it clear that we are not claiming to be part of any organization, association, or political movement. This work and this message are personal, a point of view of citizens of the world.” 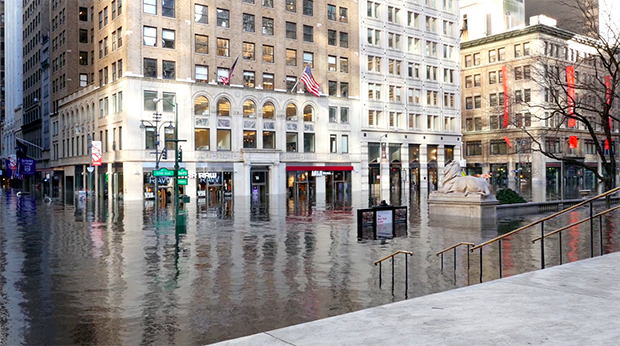 Why did you choose to make the water a certain height? Was it based on data?
“The simulated level in different places varies between forty centimeters and 1.40 meters. A low level of flooding makes the film even more realistic. It was not the goal to have ten to twenty meters of water in the streets, although this scenario is also plausible with the possible impact following the collapse of the volcano in the Canary Islands. This film is a result of the work of James Hansen’s team, which provides for a rise of five to nine meters in the next sixty to eighty years. 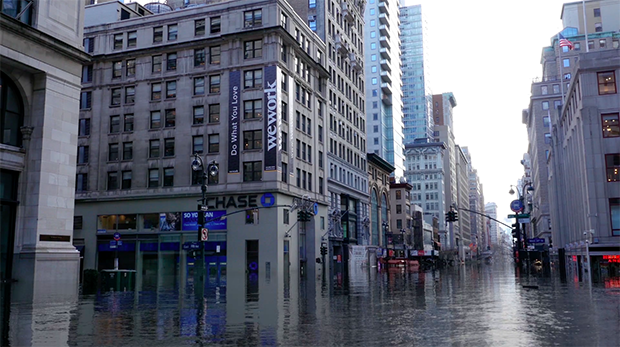 Did you know that Donald Trump would withdraw from the Paris climate accord? Has this influenced the meaning of the film at all?
“We started to make the film in early 2017. We needed five months to realize it. We put it online on June 1st, and on June 3rd, Donald Trump announced his withdrawal from the Paris agreement. The limitation of the 2 degrees is already too dangerous, as shown in the film. Donald Trump’s withdrawal is unconscionable.” 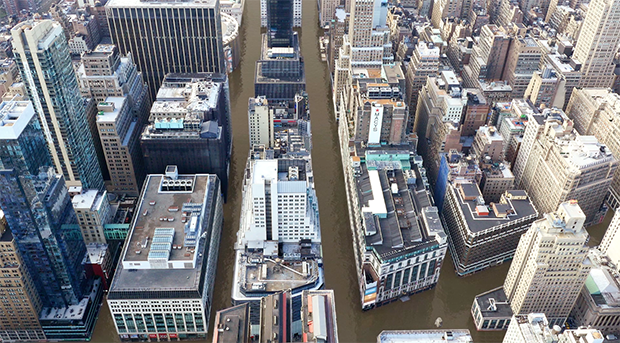 What is your greatest hope for the film? What can we do to help protect the planet?
“As we said earlier, we must continue the communication and pass along the message. We hope that the film will help to increase awareness of the danger. Climate change is a new marker in our history. Man can now affect the climate, we are now in the Anthropocene Era. Fortunately, we have become aware of it, and we must use all possible means to ensure that future generations enjoy a better environment.

“Antoine de St Exupery said, ‘We do not inherit the land of our parents; we borrow it from our children.’ It is to be hoped that governments will at least comply with the agreements signed, which will enable them to renegotiate in the near future. But we must also multiply the development of renewable and alternative energy and above all invest heavily in research.” 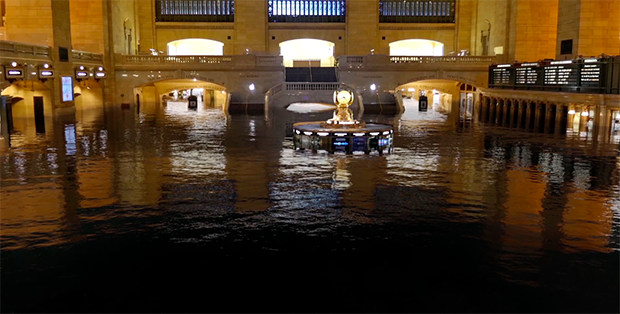