The Devastating Effects of ‘Warm Waters’ throughout the Pacific Islands 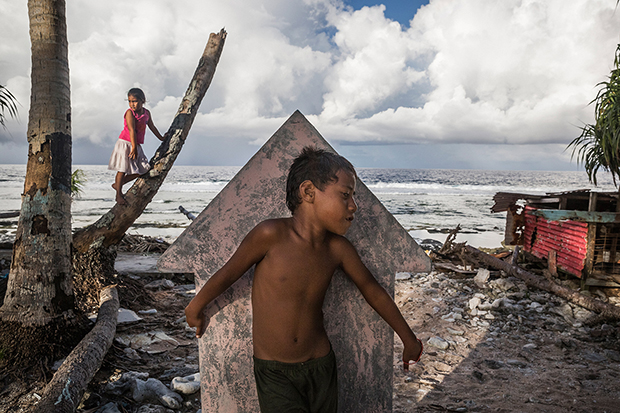 Children playing “hide and seek” in a grave yard of Teone village, Funafuti. Massive coastal erosion in Teone caused many coconut trees fall down, and the sea has eaten its way into and around the trees that are still standing. People from Teone are threatened on one side by the ocean and its tide surges and on the other by a pit that fills with salt water at high tide due the soil salinisation.

When the floods, cyclones, typhoons, and high winds hit the island nations of the Pacific, mothers and fathers anchor their children to their homes by binding them to large items, lest they be swept away and devoured by the ocean. Graveyards too are washed cleared away by rising sea levels, the bodies of the dead ripped from their resting places below ground.

The first seeds of what would become Warm Waters were planted for Sokhin in 2013, when he embarked on an assignment for Global Mail alongside Jo Chandler, an Australian Journalist. Here, he saw firsthand the ravaged landscape of Papua New Guinea, a community torn asunder by deforestation and rising tides.

From there, the photographer made his way to the other islands before pitching the project to a German publication, who turned down the images on the basis that they could not with confidence find any “proof” to the fact that the waters were indeed rising. Warm Waters, then, is not only a cri de cœur on behalf of these people and their homes but also a prophecy of things to come should we continue to ignore the signs; as Sokhin puts it, “I am collecting photographic evidence of climate change.”

Warm Waters will take years to do properly, and Sokhin has wholeheartedly thrown himself into the work. In Tuvalu, he was the only professional photographer to capture the situation following Cyclone Pam in the early spring on 2015; in Vanuatu, sixteen lives had been lost, along with entire swaths of verdant land. He saw houses, hospitals, schools, and roadways razed to the ground by winds and rainfall; says the photographer, “I couldn’t believe my eyes. People literally lost everything.”

Despite the painful situations he has recorded, Sokhin insists that Warm Waters is as much about resilience as it is about tragedy. When he returned to Vanuatu after traveling to Nepal following the Earthquake, he found to his astonishment that the local people wanted to organize an exhibit of his images in order to raise funds to benefit Nepal. Even after all they had suffered, says the photographer, “they would give their last plate of food to help others.”

In honing in on the children, Sokhin allows for the possibility of a brighter future. Local and international organizations are helping to introduce renewable energy, new water tanks, and fortified roads into these communities. People are being relocated following and in case of the ever-increasing disasters. In the children, the photographer sees the flicker of hope: “When it’s flooding, they swim in the pools of water near their houses or try to surf on improvised surf-boards during high tides.”

To help, Sokhin encourages us to visit or to donate to organizations on the front lines, including UNICEF Pacific, ChildFund Australia, ChildFund New Zealand, Oxfam Australia, Live&Learn Vanuatu, and Greenpeace Australia Pacific. 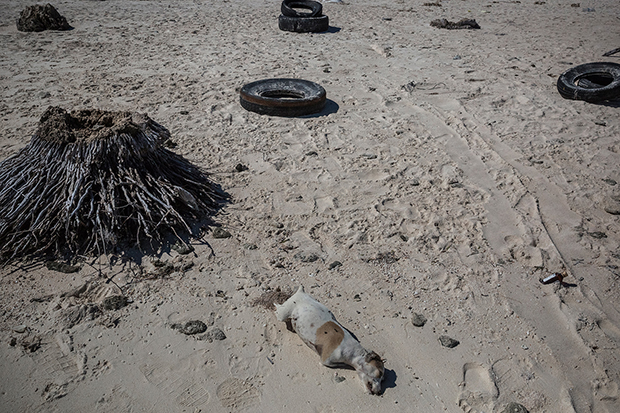 A drowned body of a dog lays on a send in an area of Tebikenikoora village, which gets flooded during high tides.
The residents trying to build a sea walls or take care for those that were built by the local government, but the big waves continue damaging them, putting people’s houses, homes, animals, and gardens under constant threat. 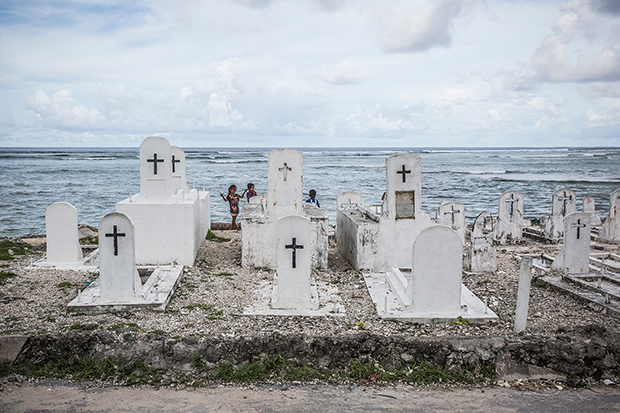 A local cemetery in Jernok village, Majuro, which is slowly being destroyed by the rising seas. “Cemeteries along the coastline are being affected,” says Kaminga Kaminga, a climate change negotiator for the Marshall Islands. “Grave sites are falling into the sea. Even in death, we’re affected.” In June 2014, rising sea levels have washed the remains of at least 26 skeletons of Japanese WWII soldiers on Santo Island. 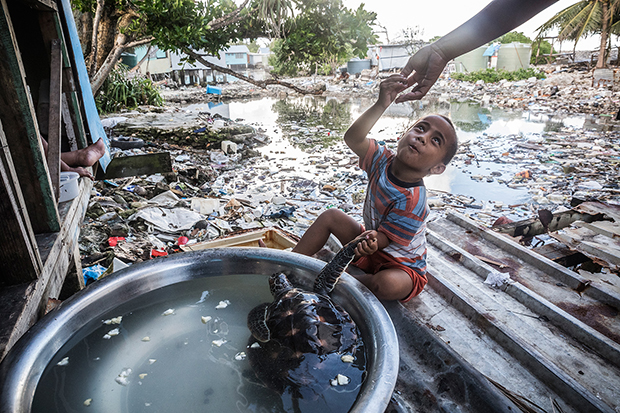 Laisela, 4, plays with a turtle in her family house in TeKavatoetoe community, South Fongafale. Behind him is a pit, filled with garbage and salt water. TeKavatoetoe is one of the most vulnerable communities of Tuvalu, where the elevation is 3.3 meters above zero sea level. The village is threatened by the high tide surges and by salinisation, which poses a big problem, as the ocean water pervades through the pores of the coral rocks during high tides. 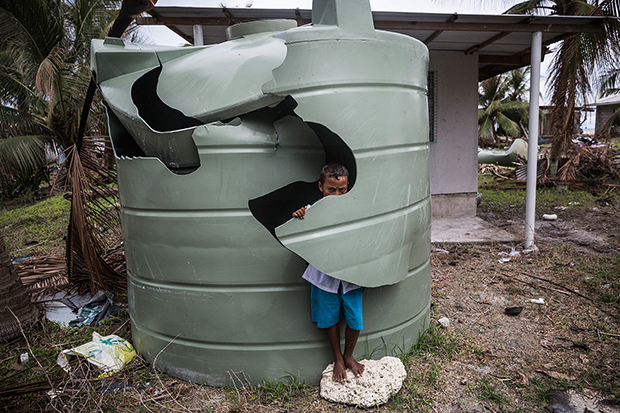 Utime, 9, poses near a damaged water tank, in Tanrake village of Fenua Tapu islet, Nui atoll. Nui was badly hit by Cyclone Pam in March 2015. All 672 residents were affected. The Cyclone fully destroyed 12 houses, damaged another 110 homes and displaced 71 families (40 percent of the population) 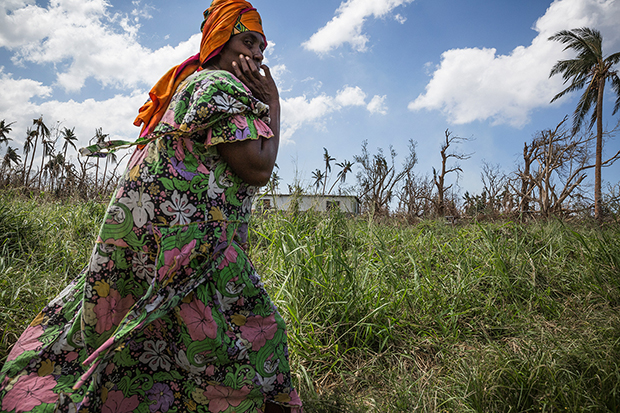 Margaret Jonathan, 46, walks through Pang Pang village, which was badly damaged by Cyclone Pam. Margaret is a single mother and she supported her two sons through selling vegetables from her garden in a local market. Her house and garden were completely destroyed by the Cyclone. She had lost everything. 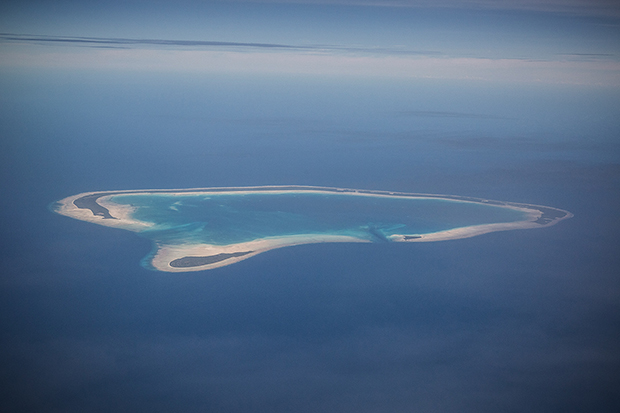 Apememe atoll, Kiribati. Most of the atolls of Kiribati are elevated less than a meter or two above the sea level. 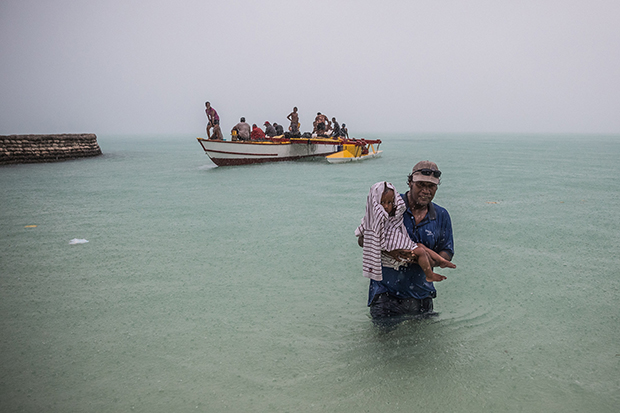 Teiwaki Teteki, 28, carries his 4-year-old son Paaia to the shore in heavy rain. Teiwaki and other passengers travelled to Taborio village from North Tarawa by “te wa uowa” (double) canoe, which is the only way to get from north of the Tarawa Atoll to the south during high tide. As El Niño continues to dominate the tropical Pacific, its impacts over Kiribati islands includes more rain and windy conditions. For nearly two years, it has been raining almost every day in the northern part of the Gilbert Islands chain. Despite this, people of Kiribati have difficulties accessing clean drinking water. In the past few years, Kiribati has experienced several diarrhea outbreaks, caused by rotavirus, which led to the hospitalisation and even the death of young children. 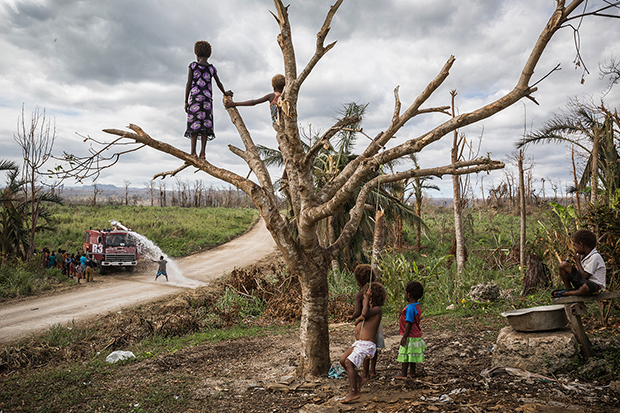 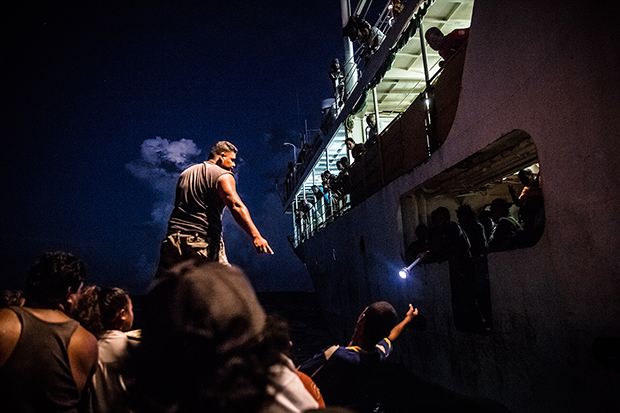 People from Nukufetau Island boarding the “Manu Folau” ship that will take them to Funafuti, the capital of Tuvalu, where they hope to take refuge. Nukufetau was among the other outer islands of Tuvalu that were badly hit by Cyclone Pam in March 2015. Many of their residents left the damaged areas and went to to stay with the relatives in Funafuti, which was not as badly affected by the typhoon. 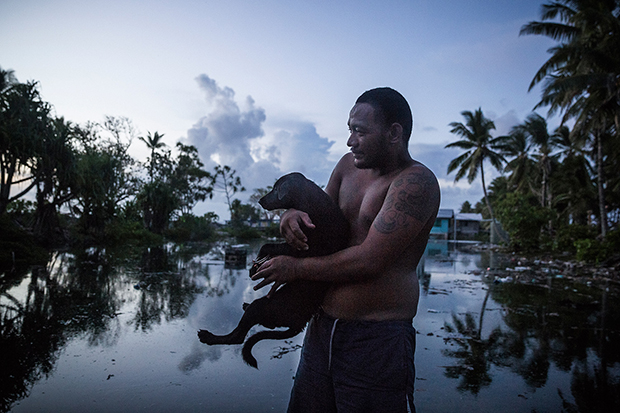 A man and his dog standing in a flooded area in Teone community, Funafuti. Teone is among other places in Fongafale Islnad that are threatened by the high tide surges and by salinisation. 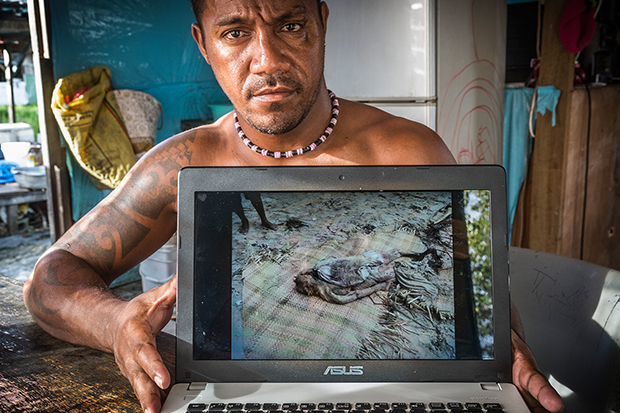 Category 5 tropical Cyclone Pam hit the Central and Northern islands groups of Tuvalu between March 10 and 11, 2015. three to five meter tidal surges swept across many northern atolls, destroying roads, houses and cemeteries. Nelly Seniola, 35, an extension officer in the Tuvalu fisheries department, shows on his laptop a photo of a dead body that was washed out by the storm surges from the cemetery in Nui atoll. Nelly says: “There were many dead bodies, sculls and bones floating around. Pigs and chickens started to eat some of the bodies. We received a radio message from the capital, that we had to kill those animals, as they could spread diseases.” 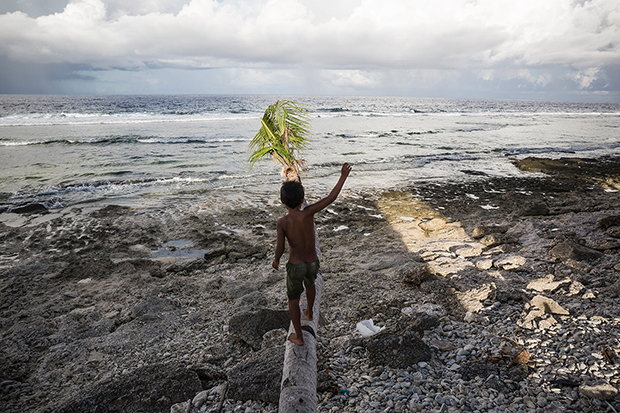 A boy walks on a fallen palm tree in Teone village, Funafuti, Tuvalu.