Powerful Portraits of Women Who Are Changing the World 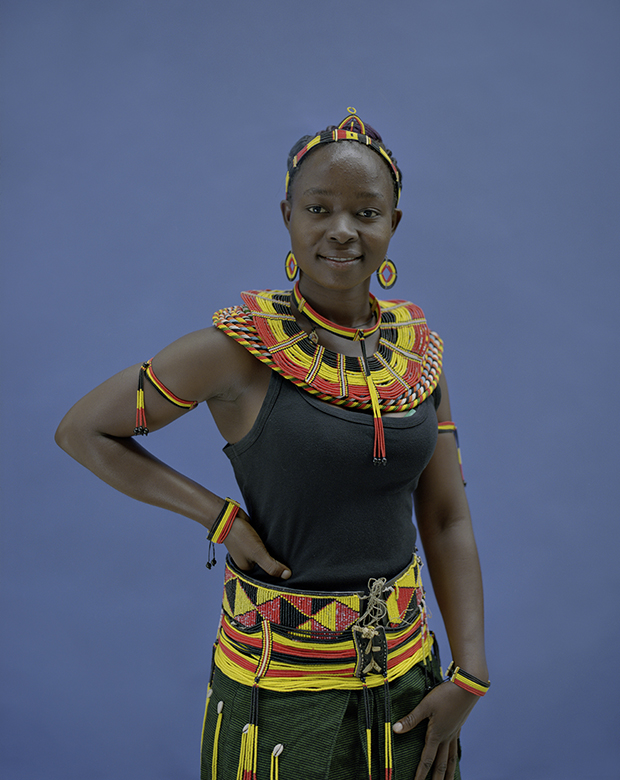 Clementina Ilukol, Uganda, is a leader of young midwives.

“There are many challenges for women in the community where I work. There is a lot of domestic violence. There is child marriage. forced marriage. You find these young girls being denied the chance to go to school because they are supposed to care for other children at home, not knowing they are being denied their rights.

“The best advice I have received is to take time at school. Acquire higher levels of education and don’t be rushing into marriage. I am still single, and I feel I should work hard. After that, I will get married.”

“There is an awakening happening on a large scale,” Copenhagen photographer Andreas Bro tells us. He’s talking about the fight for women’s rights, and he saw it firsthand when attended the Women Deliver conference, where nearly six thousand individuals from 169 countries came together to discuss the health, education, and wellbeing of girls and women around the globe.

On assignment for DCA (DanChurchAid), Bro went to the conference to photograph activists, politicians, organizers, and ordinary people who believed in gender equality. He set up a blue background, a tripod, and his medium format Pentax camera, and he invited women to sit for portraits. Then he listened to them, learning about their stories and their motivations.

The photographer asked each of the women, “What is the largest challenge for women in the world today?” They all had different responses, based on their own experiences and the lives of women in their communities. He spent three days at the conference, and the overwhelming majority of people Bro approached were happy to be photographed. They wanted to be seen and heard.

The women’s words and convictions have stayed with him long after the conference. He titles the body of work I Was Raised As A Negative after something Edidiong Michael Umoh, a health care officer in Nigeria, told him. “I got the interest for advocating for women when I discovered I was raised as a negative,” she said, suggesting that being born female in a patriarchal society means being seen as unworthy or less-than.

Even at home in Denmark, Bro sees it.”I have gotten more and more aware of what women have to listen to and be subjected to because of larger structural issues in most societies,” he writes, “When I walk at night, I usually feel safe, and it seems that women just have a whole other awareness of what they can be subjected to if they run into the wrong person. It is not just the issue of assault but also just about going out and being in public.”

But at the conference, Bro also saw real change and reason for hope. He met women who had survived discrimination and trauma, and he met women used those experiences to make the world a better place for the girls who will inevitably follow in their footsteps. 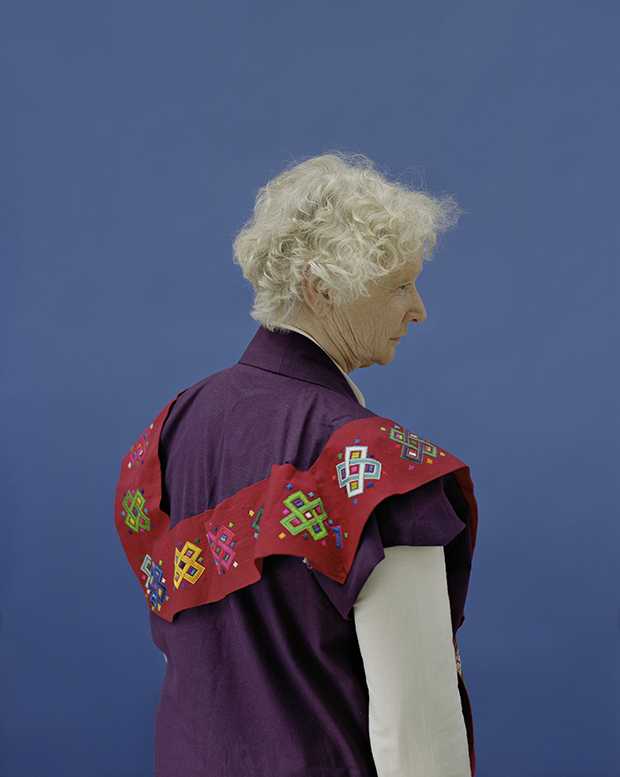 Gretchen, USA, is a retired science teacher and administrator for Grades 5 through 9.

“I have been involved with women and children as a core thing in my life, from being on cultural boards, on educational boards, and at schools. I don’t think gender inequality is quite the same now as it used to be, but I think there is a huge problem for women in the world. I want to be here to find out what it’s all about.

“The biggest issue we face today is that we (women) are maybe forgetting how important it is to politicize. I think that the head of Planned Parenthood said it so well this morning when she said, “We can do this, we can do that, we can do the other, but if we don’t get it changed in the world of politics, it’s not going to happen.

“The best advice I have received is to be yourself and to work for others. You gain power by working with others.” 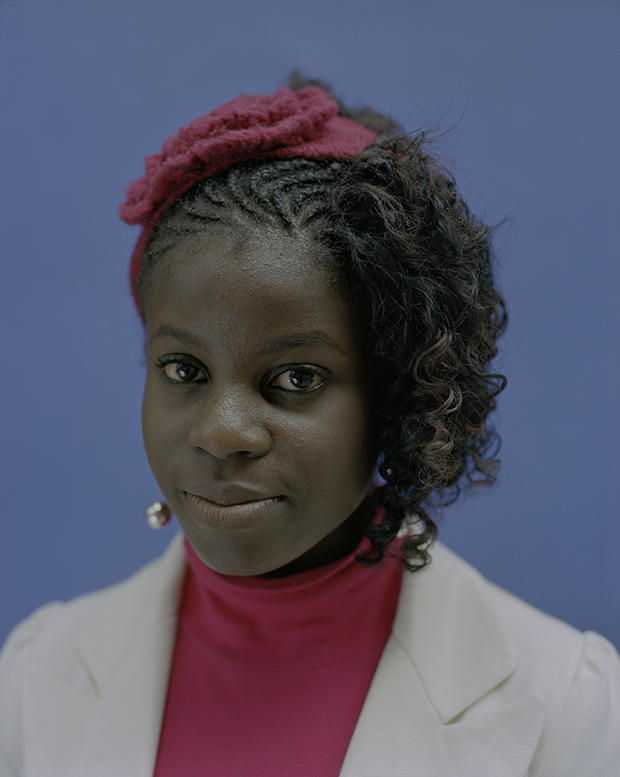 Praise Emenike, Nigeria, works with FHI 360, strengthening and integrating the delivery of HIV/AIDS services in communities.

“We go out to the community, and we conduct mobile antiretroviral therapy services. First of all, everyone who is positive should know their status, and then they should have access to sustained care. I like my job, and I like the fact that I am able to mitigate the problem. I see the people in the community, and I see that they need help and support.

“The biggest issue today is gender-based violence. We have gender-based inequalities everywhere. In the place where I work, women need to get consent from their husbands to access a simple HIV test. They should be able to decide for themselves. And women who have unintended pregnancies should be able to decide how many children they want to have, and sometimes they don’t have that opportunity.” 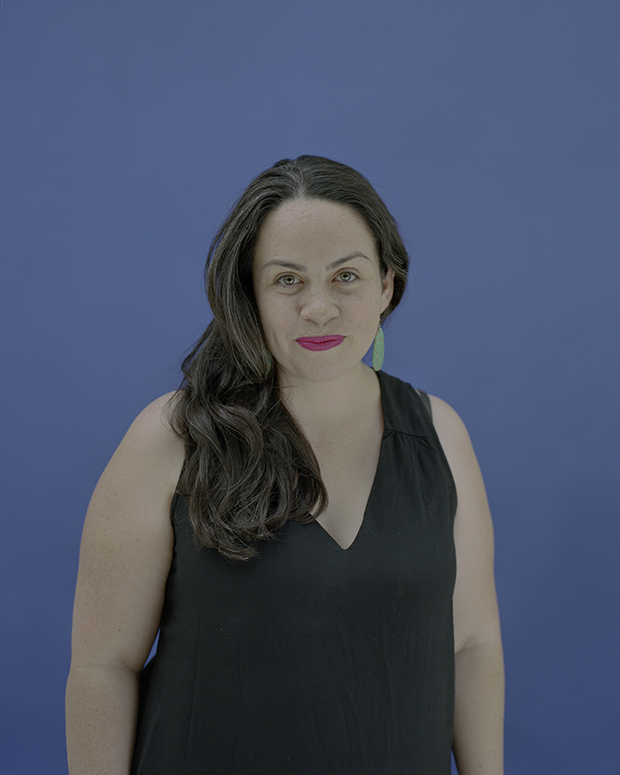 Denicia Cadena, USA, works as a policy director at Young Women United, an organization that leads community organizing by and for young women of color in New Mexico and the US.

“I am working on a project with a group of researchers from the University of New Mexico around access to contraception. My organization was brought on to make sure that the methodologies they use don’t include reproductive coercion and don’t shame young families and people who become parents as teenagers. We make sure it’s inclusive of LGBTQ young people. We also work on building educational equity for teen parents. We work on framing addiction as a health care issue and making sure that women who are using substances can get access to prenatal treatment and are not incarcerated for their substance use.

“I think most of what I’ve learned about making change in this world has come from my mother, my sisters, my grandmothers, and in a different way, from my ancestors. But it’s really about focusing on the community. The people who are the most impacted are the experts of their own lives, and they will have the best solutions we need for our communities.” 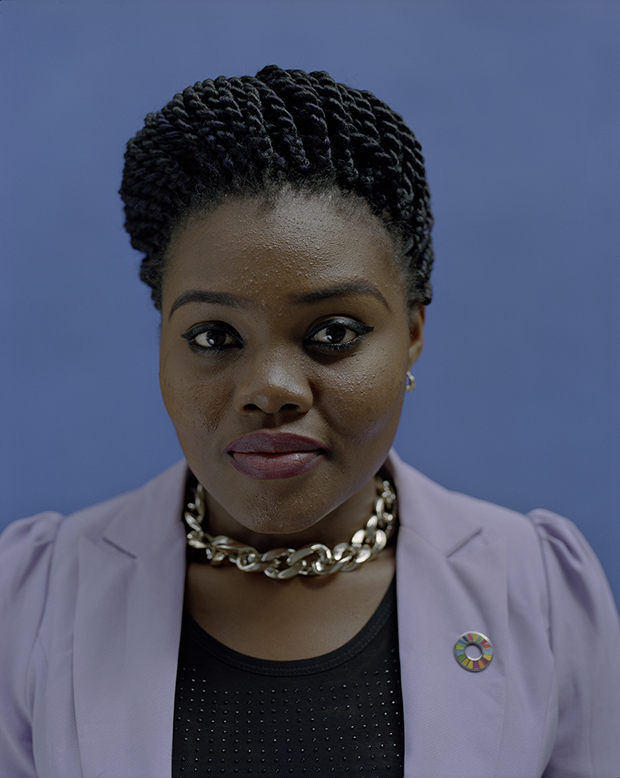 Chidinma Akpa, Nigeria, is a medical student in her final year at the University of Ibadan.

“I teach comprehensive surgical education, and I work with action groups on adolescent health. I go to secondary schools to talk to adolescents about their bodies and sex education. I talk to them about how to prevent HIV and unwanted pregnancies.

“The biggest challenge today is gender inequality. I would say most of the work women do goes unrecognized, unappreciated, and unpaid for. At times, a woman is the brains behind all the work being done, but somehow you find out that the appreciation is given to a man. It is repackaged, and the whole thing goes to a man. Especially back home in Africa.

“I would hope for a world where they would be appreciated more, taken more seriously, and welcomed into the inner circle of influencers. In terms of intellectual progress and creativity and innovation, let’s give women a chance to come up and stand side-by-side.” 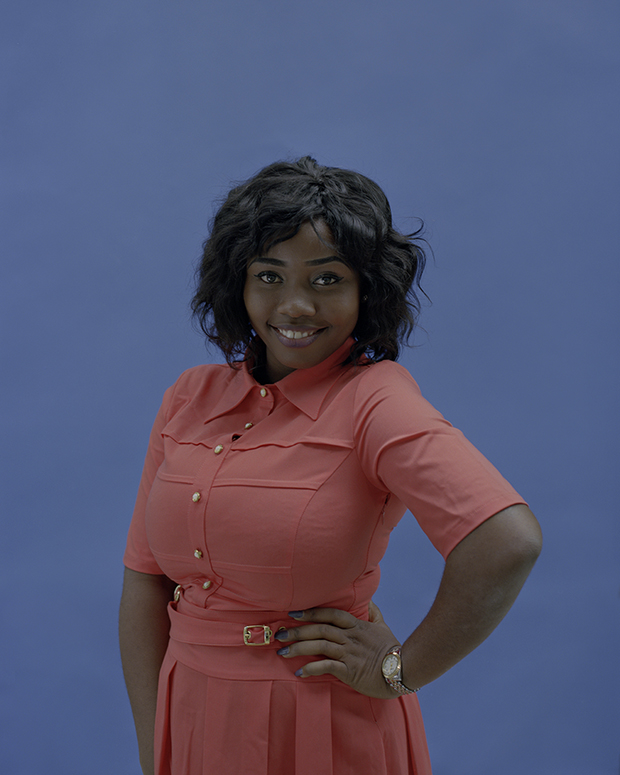 “The biggest challenge for me is domestic violence and the fact that women are being marginalized. Women are known to have some level of an inferiority complex, whether you like it or not. I used to be very timid as a young lady. When I was 16, I had a boyfriend, and I was timid around him and his friends. They would laugh at me and talk to me, and I was just trying to be that ‘good girl.’ I wouldn’t say anything. Then I discovered that I was better than this. You find that men do these things and get away with it, so any time I see a man trying to bring down a lady, I make sure I stop it.”

“The best advice I got was from my godmother. She’s a judge in one of the states in my country. She used to say something to me when I was living with her at my second year of university: “Whatever your hands find to do, do it as if you are doing it unto God and not unto man, because men will never reward you. Learn how to do whatever it is that you want to do with the mindset that you are not doing it for anybody but yourself.” 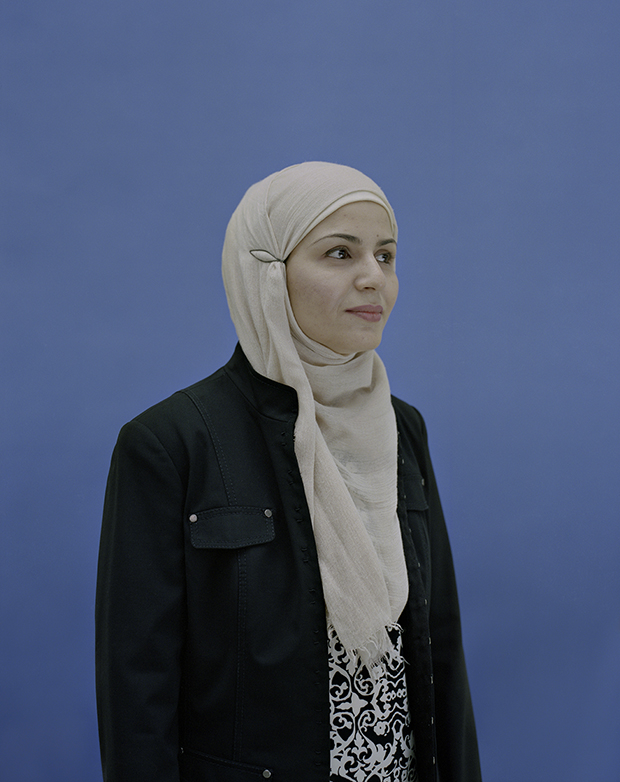 Sadiqa Basiri Saleem, Afghanistan, is the executive director of the Oruj Learning Centre, focusing on girls’ and women’s education.

“If we are not investing in girls’ and women’s education, there is no way for women to use other resources for their benefit. Education is the key to all solutions, especially in Afghanistan, where education has been misunderstood and misinterpreted by the extremists. Both men and women are an active and productive part of a whole society. Without women, this world cannot move on.

“Today, I am able to work with thousands of women and provide them with primary education and higher education. I’m able to do that because of the support of my father and later on, with the support of my husband. I have been treated as my brothers’ equal. If the same opportunities are provided to women, I’m sure women would not be consumers. Women would be producers.” 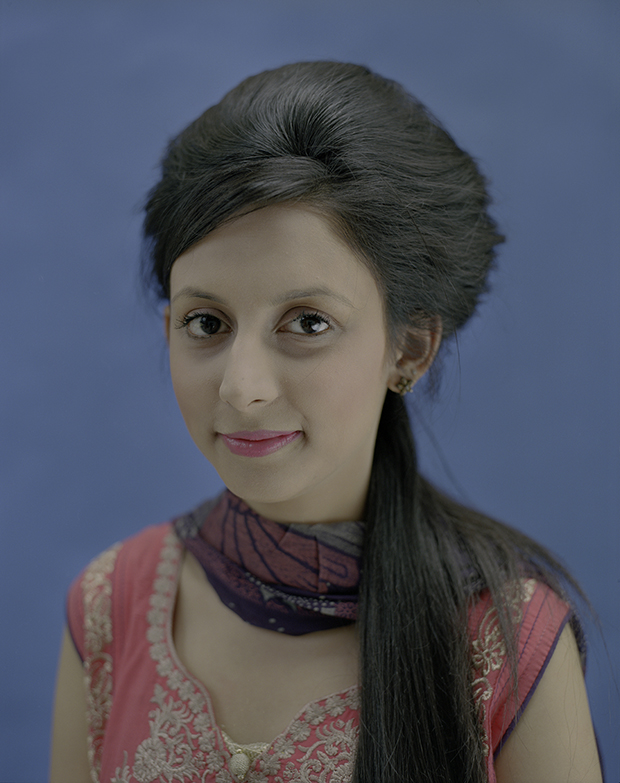 Laraib Abid, Pakistan, is working as a Senior Manager Monitoring in the international non-governmental organization the PATRIP Foundation. Here, she also focuses on how women living near border areas can be empowered. She is also the founder of Mashal, which focuses on women’s empowerment and interfaith harmony. She has a Masters in Gender Studies at the University of the Punjab.

“In Pakistan, our major institutions play a huge role in the formation of gender roles. The main issue over here is that still the majority of women aren’t considered equal to men. Their choices, mobility, wishes all are dependent on men. It’s normal for a man to hang out, travel, and earn a living, but for women, cooking and doing household chores are considered an asset, instead of her professional achievements. She is supposed to look after the family, cook, and clean the home, even if she is earning outside the home. This is a grassroots/micro level problem that directly affects the overall behavior and life of the people.

“Until daughters and sons are treated equally, we can’t come out of domestic violence, sexual assault and harassment, Eve teasing, honor killing, etc. When a daughter is asked to iron the clothes of her brother, polish his shoes, cook for him, and when that brother can make decisions of his sister’s life, then how can we achieve equality? The institutions- education, marria-ge, politics, health, family and media- all are influenced by this.

“My mother, who is my inspiration, always told me to be a good human being first. She never forced me to be an expert on household chores but supported me and my achievements on a professional level. Today, if I am able to inspire even a single person, that’s because of her. She asked me to think and work like a human being, not like any gender. If are men or even a third gender suffering because of other genders, I will work to change that too.”

Captions have been edited for clarity.