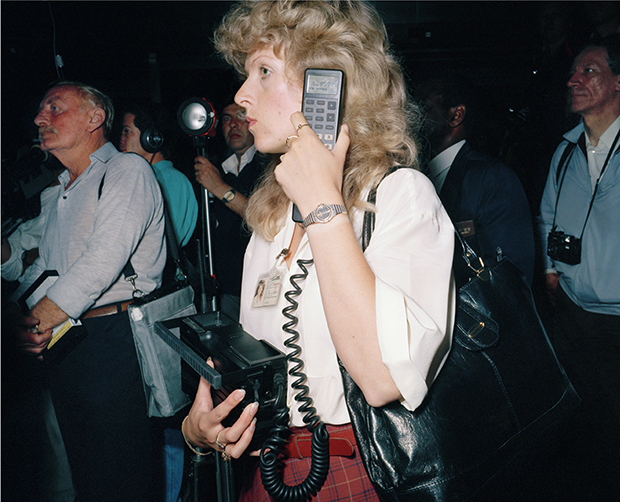 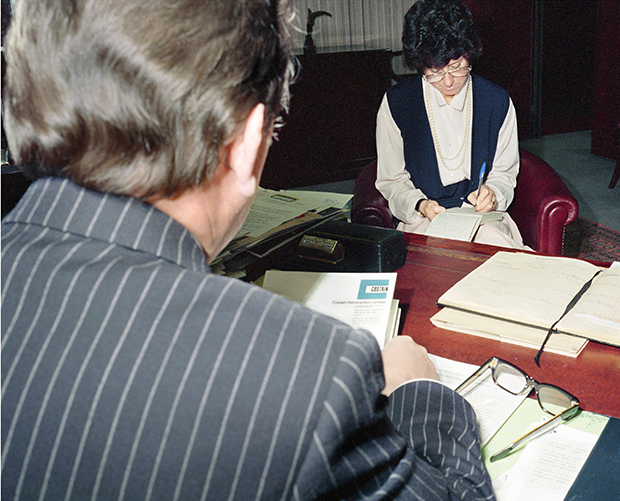 ‘Having a secretary is a status symbol’.
Eric Webster – How to Win the Business Battle 1964

If Martin Parr is known for his unmistakable style in documenting the telling details of vacationing families up close and in bright color, then photographer Anna Fox is the English workplace’s equivalent. It makes sense when one learns that Fox studied with photographers Parr, Paul Graham, and Karen Knorr, while studying at the West Surrey College of Art and Design in London. After graduating, commissioned by Camerawork and The Museum of London, she made a body of work called Work Stations,” a study of London office life in the late 1980s and a critical observation of the highly competitive character of working life in Thatcher’s Britain.”

The body of work also builds on Fox’s interest interest in working with text and image, and inspired her (with input from Anna Harding from the Camerawork Gallery) to think about the ways in which she edited her narrative into a “cinematic storyline” that plays upon the many associations we, as cubicled-humans, have about the nine-to-five work day. We asked her a bit more about “Thatcher’s London” and how that environment influenced her work. 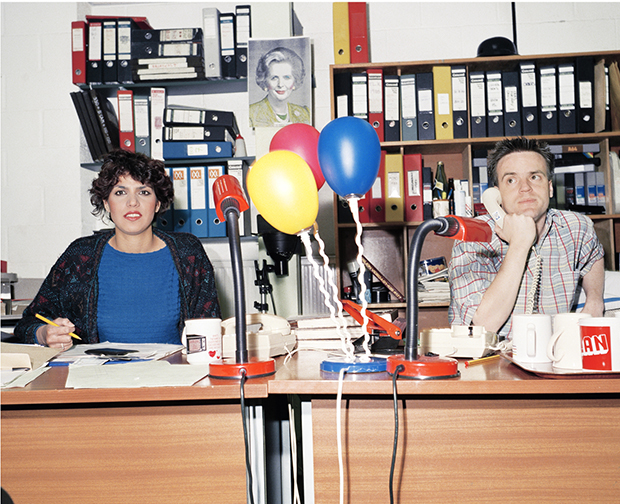 ‘Strength, stamina and precision had kept him on top’.
Business 1987 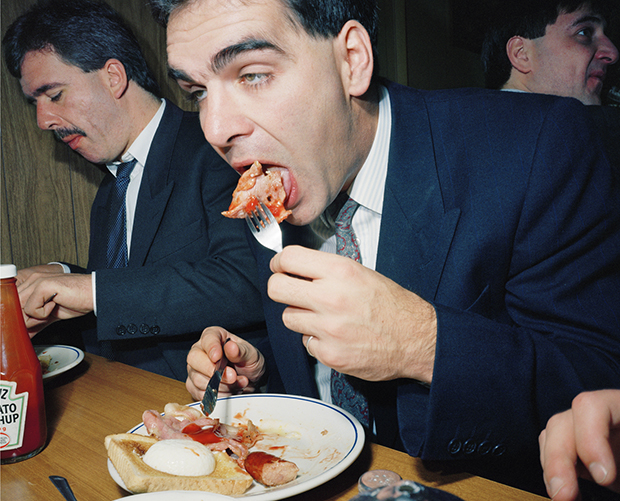 ‘Fortunes are being made that are in line with the dreams of avarice’.
Business 1987

Tell us about Thatcher’s England, please, and how that environment of the 80s influenced and inspired this work.
“I was based in London and had just graduated from my BA Photography at the West Surrey College of Art & Design (now University for the Creative Arts in Farnham). Work Stations was a commission from Camerawork Gallery and the Museum of London, it was an exciting time for me as offices had hardly been documented and I was fascinated by the everyday and what makes us tick in our daily lives. I liked to look behind the scenes at subject matter that had largely been overlooked. Thatcher’s Britain was particularly interesting because this incredibly conservative regime promoted the cult of the individual and encouraged the pursuit of personal wealth. One of Thatcher’s most famous phrases was: ‘There is no such thing as society, just individuals…’

In the UK we lost all sense of community and people got very greedy. In Work Stations I used captions (beneath each image) that I collected from both the media and the work place to help emphasize the aggressive nature of the society of the time. The combination of harsh color, brash flash, and angry texts allowed me to show London office culture as some kind of Orwellian nightmare.”

How was this work made? Did you have friends working in these offices or did you go in straight with the commission from the Museum of London and Camerawork?
“The work was made slowly over an 18 month period. I gathered contacts from a variety of sources: The curators from Camerawork and the Museum all had contacts with offices and friends who worked in them, this was incredibly helpful. I had worked in offices before studying photography and all my family worked in offices at the time. I just used every possible contact that I had to get into these spaces – I got into about 60 offices altogether (not all of them were included in the final book and exhibition as the edit was more about the structure of the narrative and not about including every place). Basically I had to make a lot of phone calls and even did a lot of knocking on doors – I chose a variety of offices from local councils to big banks to manufacturers to insurance companies and as well smaller offices such as publishers and private law firms. Not many people turned me down, most people are interested in becoming part of history which is a major part of what documentary photography is all about.” 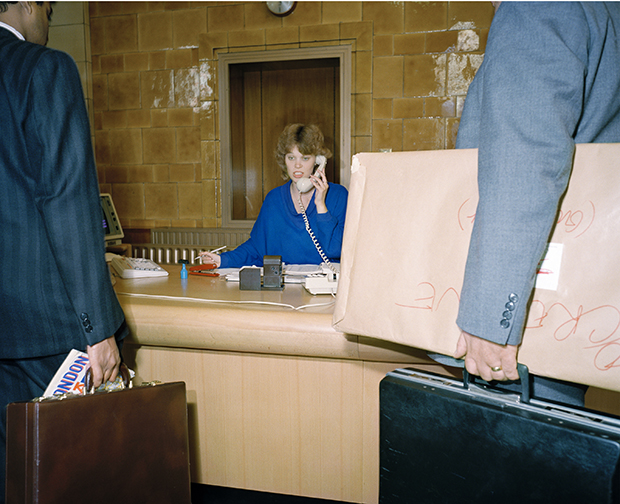 ‘Should a competitor threaten to kill a sale, the modem would provide a lifeline back to base computer’.
Business 1986 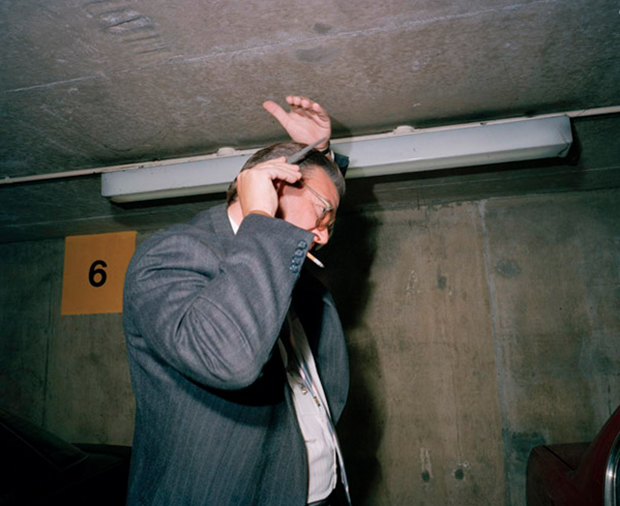 Did you learn anything about yourself in the process of making this work? What was your vision for this work and did any changes happen along the way?
“I was thinking all the time about my own relationship to the world of office life and really it was incredibly interesting to be behind the camera in offices as I had worked in an insurance office and so understood quite a bit about office politics. I felt some degree of liberation being an outsider with camera looking into this fairly private world yet having an insider’s knowledge. I never start with an exact vision though at the time that I made this work I was fairly fixed on an approach that included color, flash, and text captions. I try to keep an open a mind as possible so that things that happen along the way can influence the development of the work, being immersed in a place or space brings new ideas.

There were a few things that made me think differently about my way of working. The first was an occasion that I wanted to photograph inside a typing pool where the women (as typists were all women then) were being paid one penny per letter (piecework) and the manager thought my flash would put them off so he would not let me in – I was incredibly disappointed and suspected it was more to do with the fact that he did not want the situation photographed. In any case he lent me a company training video that showed what it was like in a typing pool and I took some photographs of the women working off the TV. I thought they would be hopeless but when I processed them I was excited about the way the look of the TV screen exaggerated the feeling of an electronic sweat-shop so I used the picture with a quote underneath it saying: “A typing pool is a happy place for girls who like working with other people.”

The quote came from a book about the office worker written in the 1960s so very out of date and this made it more ironic with my sweat-shop style image. I say that this image made me think differently because it was a new way of shooting pictures, a way I have not considered valid before, so it set of a reaction in my approach to image making and my next body of work was an image/sound projection created inside a box installed in the gallery space – The Village (never published as a book, or, not yet anyway…)” 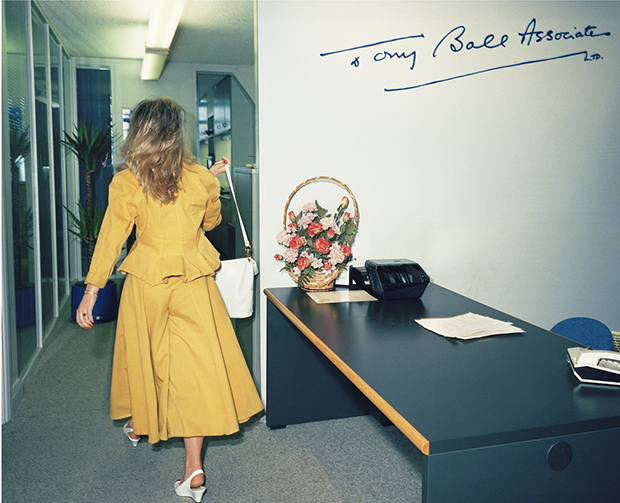 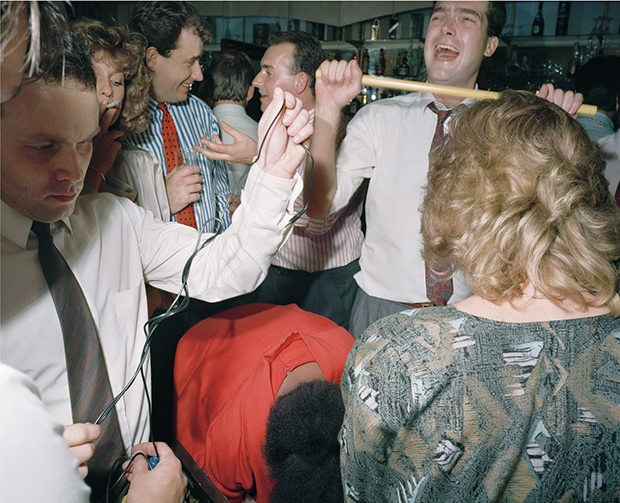