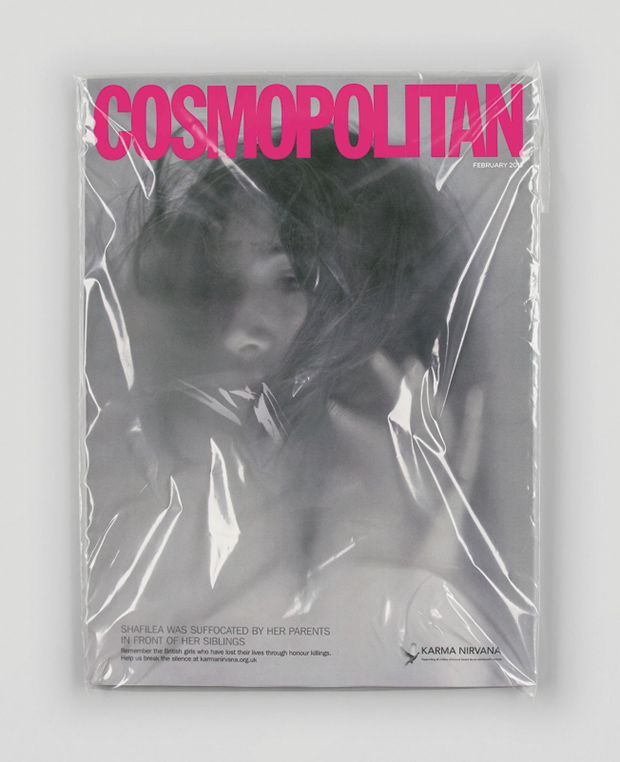 When British Pakinstani parents Iftikhar and Farzana Ahmed murdered their daughter Shafilea after the 17-year-old had resisted an arranged marriage, the subject of honor-based violence moved to the international fore. Like Shafilea, who was suffocated with a plastic bag in her home and in view of her sister, an estimated 5,000 women are killed annually worldwide for behaviors deemed by their families and communities to be “shameful” or “dishonorable.”

In a chilling limited edition cover by Leo Burnett Change, the branch of the agency devoted to social change, the February issue of women’s magazine Cosmopolitan U.K. alludes to the death of Shafilea Ahmed with an underwater image shot by photographer Erin Mulvehill. Bound in plastic, the image graphically recalls the horror of honor killings, becoming an urgent plea for awareness and action.

The cover works in conjunction with a 7-second film as a campaign for Karma Nirvana, a non-profit aimed directly at aiding victims and survivors of this type of violence. The video, which has been released online, depicts the removal of the plastic from the face of the woman, becoming a symbol of hope and freedom for women around the world.

Cosmopolitan has partnered with Karma Nirvana and Henry Jackson Society to commemorate the life of Shafilea Ahmed with the first annual Day of Memory for Britain’s Lost Women on July 14, the day that would be Ahmed’s 29th birthday had she lived.