‘An Eye for an Eye’: Powerful Portraits of Albanians Confined to Their Homes Due to Vendettas 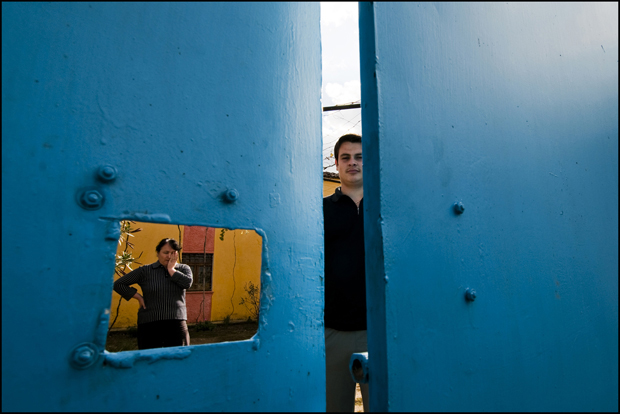 Kalmet, Albania: Rosa, 40, and her son Edi, 16. Edi is stuck in his house because of vendetta lasting 4 years. His father killed two neighbors in a dispute over severed power line, and despite the fact that his father has been killed by the family of his enemies, Edi is still at risk because his father killed two people. 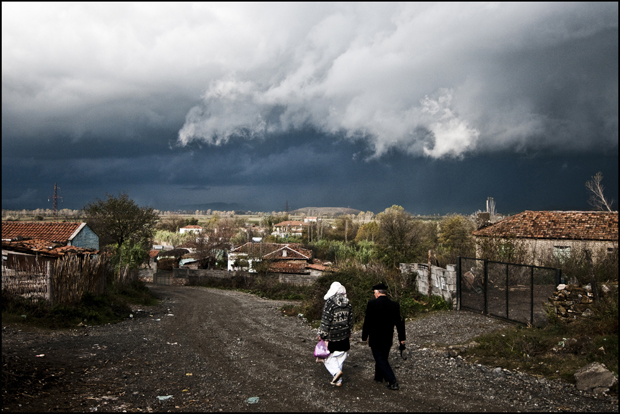 Blinisht is a small village in northern Albania where several families live stuck in their home because of fear of revenge. In the streets, there are always very few people. 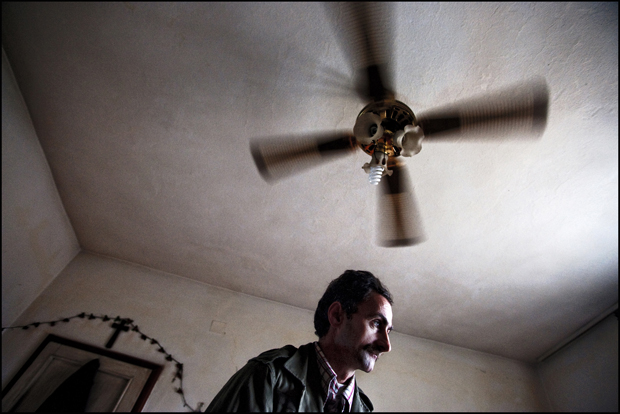 Shkoder, Albania: Dede Zef PjetergJoka, 45, lost his brother in a bank robbery. Dede is waiting for a good moment to avenge him.

According to the traditions of the Kanun, an Albanian code of law dating back six centuries, arguments between opposing families are to be settled with the blood of the enemy. When the honor of one clad is besmirched, its members are expected to retaliate with violence; when one person is killed, it is the responsibility of his kin to avenge his death by executing a relative of the murderer. For An Eye for an Eye, Italy-based photojournalist Stefano Schirato documents the harrowing reemergence of blood vengeance in northern villages of Albania, where the ancient law has returned in the wake of the fall of Communism.

Schirato learned of the killings through a friend, who was working for a volunteer organization in the region. After eliciting the help of a native Albanian woman who had studied and written on the situation, and who later took on the role of his assistant, the photographer began gradually to earn the trust of those families affected directly by blood feuds.

Most of the vendettas begin over trivial disagreements over money or property, escalating to the point where relatives on both sides have paid with their lives. Over 2,800 families, explains Schirato, are currently living within the confines of their home, designated the only safe space by the Kanun, which prohibits its violation. Although traditional law protects women and children, everyone is now at risk for murder, sexual assault, or abduction once they step outdoors.

Because of this widespread confinement, breadwinners are unable to go to work, and children cannot attend school. In order to keep the family afloat, friends often pitch in with food and financial aid. In order to fight growing illiteracy amongst young people, the Ministry of Education has dispatched teachers to educate them within their homes. Isolated people are unable to get help for physical ailments, and the long term withdrawal from the outside world, notes Schirato, often has tragic psychological implications.

In a community where forgiveness is frowned upon, some people are able to let go of years-long grudges, but the photographer admits that absolution, reconciliation, or even reprieve from the violence is rare. When asked about the civilians committing these crimes, Schirato explains that forgiveness is not the norm but the exception, that “normal and regular people” have been compelled to operate within a system of destruction. 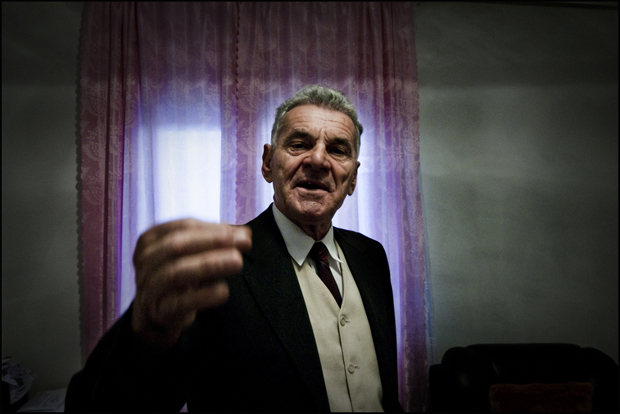 Bathmore, Albania: Marku Pietri, 70, has a brother who was arrested after being wrongfully accused of murder in 1997. From that date on, Marku has been stuck in his house for fear of revenge. 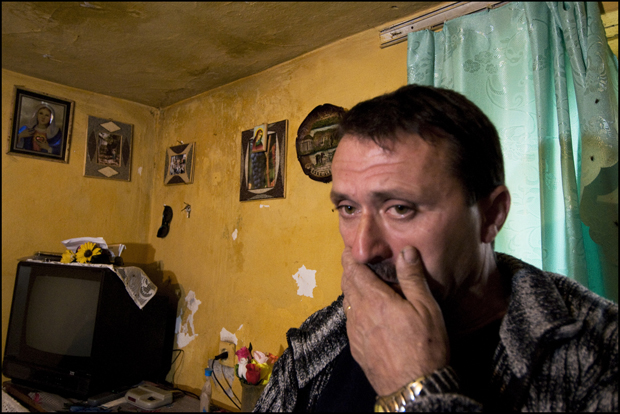 Lheja, Albania: Agim, 42, injured a fellow at the stomach with a knife and he spent four years in prison. He is still at risk of being avenged by the family of the enemy. 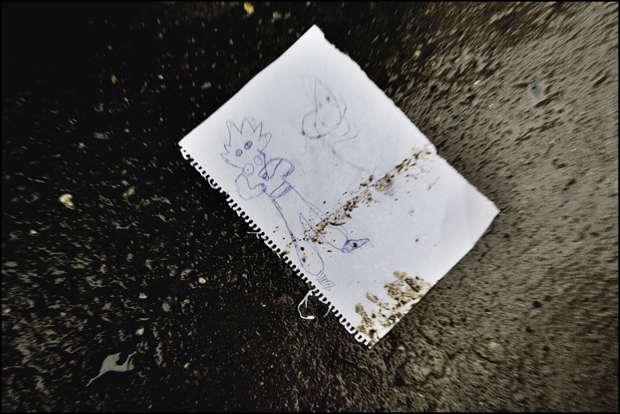 Rrila, Albania: A drawing of Diana, a little girl, locked in her house for the fear of a vendetta. Her father is in jail because killed his neighbors over ancient disagreements. 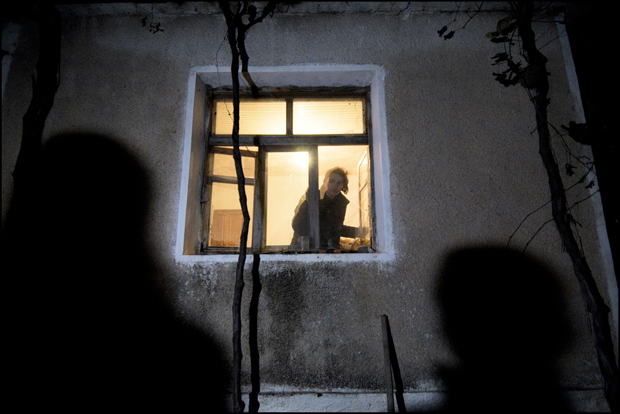 Rrila, Albania: Dila, 31. Her husband is in jail because killed his neighbors over ancient problems. She is going out of her mind. Her male son has escaped abroad, and her daughter Daiana, 7, risks her life every time she leaves home. 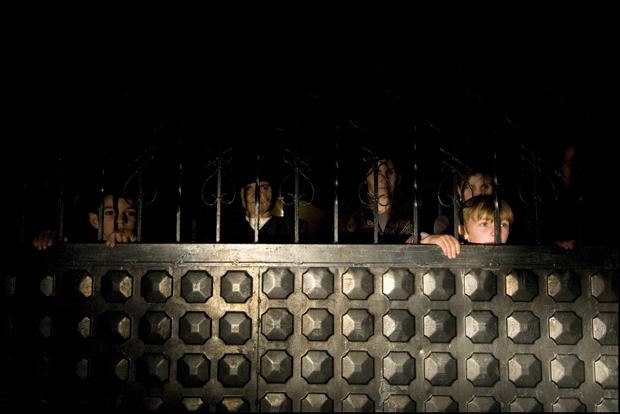 Rrila, Albania: Dila and her daughter Diana live hidden in her grandmother’s house. 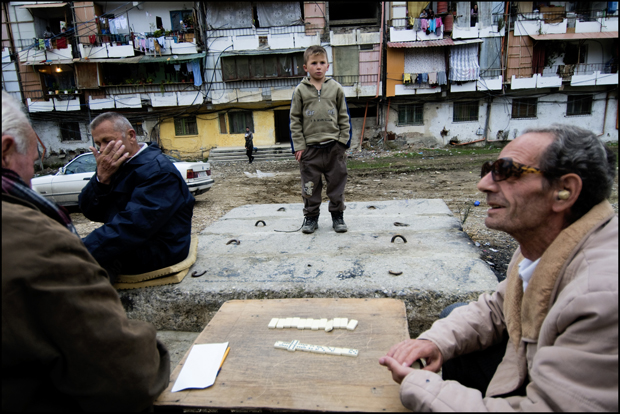 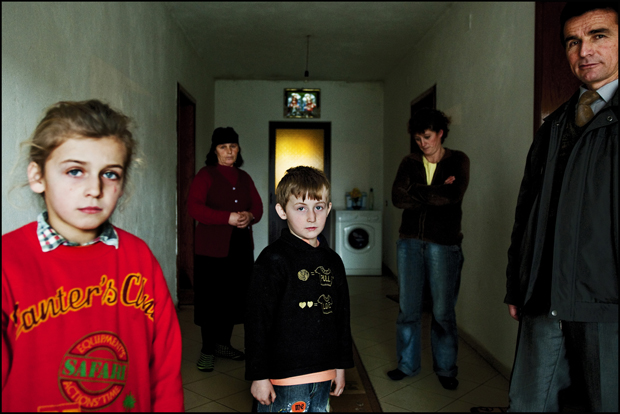 Shkoder, Albania: The Shitani Family: Alexander, 6, Mailinda, 8, Groshe, 55, the grandmother, Vera, 31, the mother and Prof. Leka. In December 2007, Besnik got into a drunken fight with his cousin and killed him. Besnik is in a jail, but his family will have to avenge the murder. His sons do not go to school and the teacher, Prof. Leka, visits their house to give lessons. 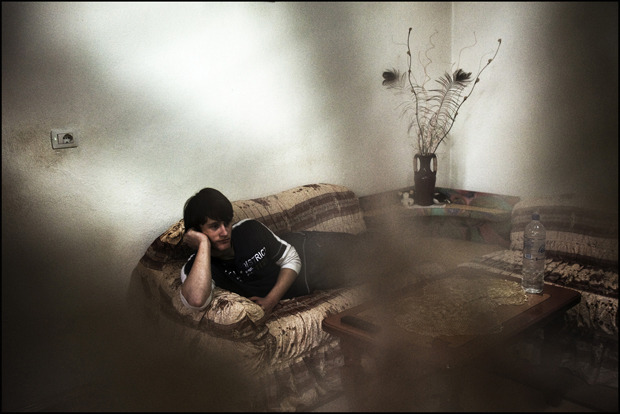 Shkoder, Albania: The family of Cristian Luli, 17, has been stuck at home since 1995 for fear of vengeance by the Vukaj family. 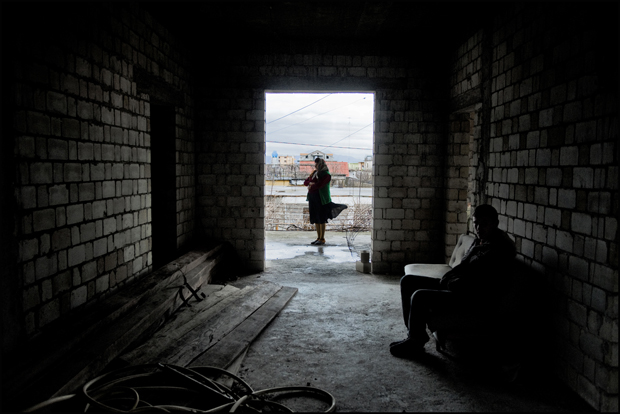 Shkoder, Albania: Sosse Preka, 50, has 2 sons, Noj, 18, and Florian, 16. Her husband killed a neighbor 5 years ago. He will remain in jail for 20 years. His sons are stuck at home for fear of blood vengeance. 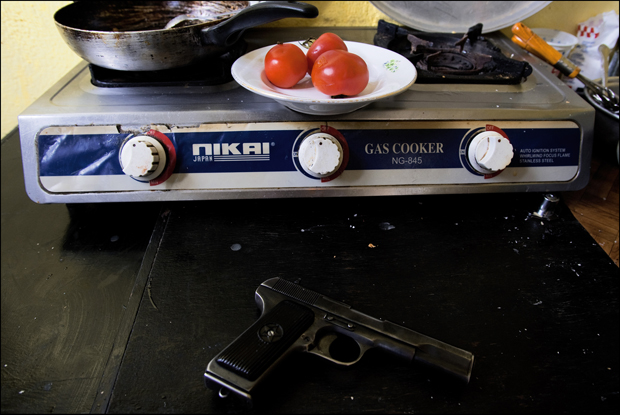 Tirana, Albania: Almost every Albanian family has weapons. You can buy the on the street without a license. 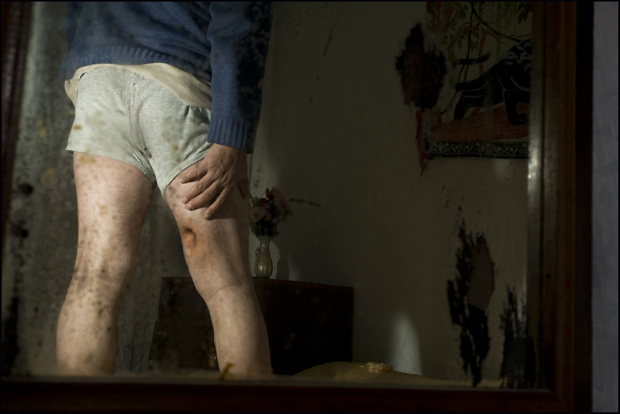 Tirana, Albania: Halil, 46, was injured in a brawl by a shot to the leg. After three surgical operations, managed not to lose his leg. His family wanted to seek vengeance, but through a broker of peace, they have forgiven the enemy family. 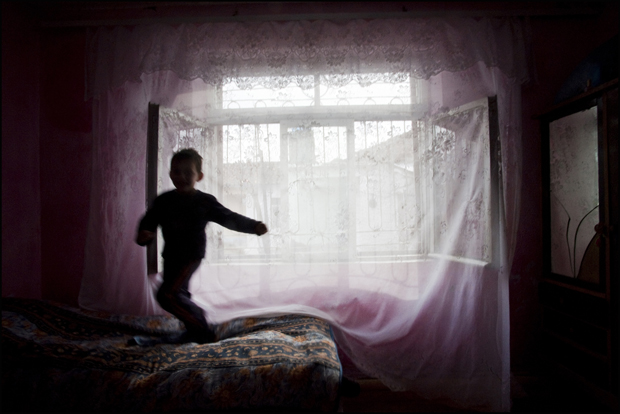 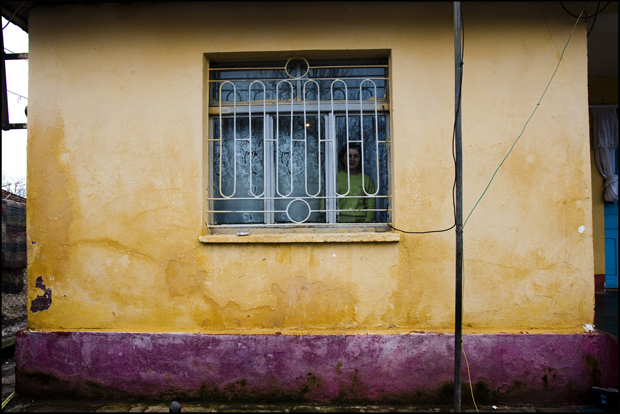 Kalmet, Albania: Nusha, 17, is afraid to leave the house since her father killed a woman following a dispute over an irrigation canal in close proximity to the house. For 2 years, she has not attended school. 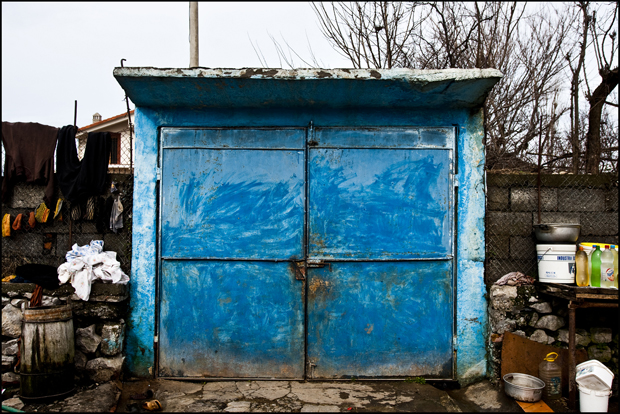 Shkoder, Albania: The Kiras Quarter is considered the quarter of vendetta. It is like a ghetto in which people have been hiding in their houses because their families ‘owe blood,’ making them possible victims. 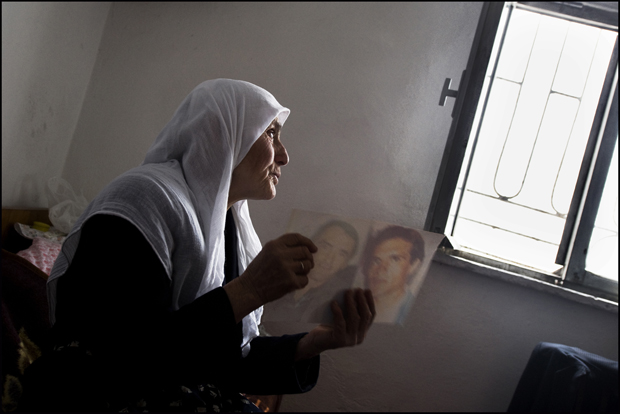 Shkoder, Albania: Behije Kadri, 73, shows pictures of her two sons, Besim and Ramazan, who were killed in front of their house 8 years ago. The children of Besim and Ramaza wanted to escape with the two daughters of a family near their home without marrying them. The uncle of the two girls, named Fasil, killed Ramazan and Besim in the morning in front of their children with a Kalashnikov. Now Fasil has fled abroad, and the Kadri family wants revenge. 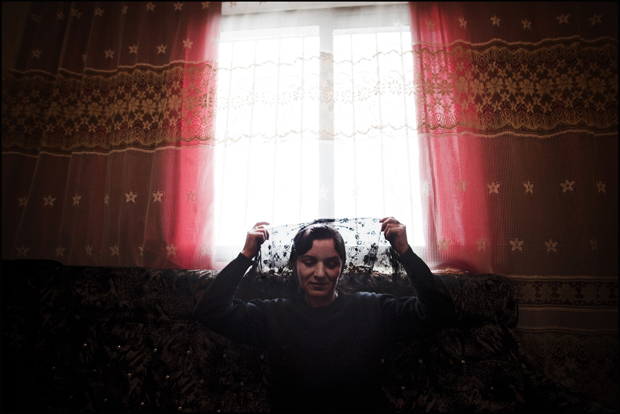 Lina Hili, 42. Her husband, Ded Hili, was killed in 1999 in an armed robbery. He worked as an accountant in a small building firm, and he collected monthly salaries. Guezim, his son, would avenge the killing of his father, but he would also be willing to forgive. But often in a small town, to not seek revenge is seen as a lack of courage, as a lack of respect for the Kanun’s rules, as a lack of pride.