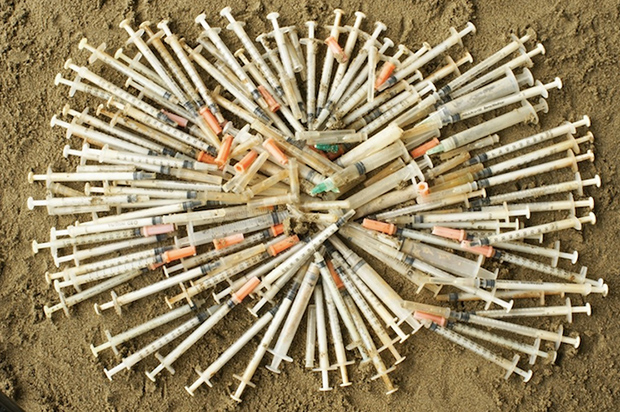 Breaking open one of the many plastic bottles littering on the shores of the Guerrero coastline, photographer Alfredo Blasquez arranges the needles contained within into an austere circle against the sand. As part of Limpia Guerrero, an environmental initiative that implements education, scientific research, and community action to clean the beaches of Guerrero, a pilot study was launched in Acapulco, Zihuatanejo-Ixtapa, and San Jerónimo in October and November of 2013. 125 miles of the shore and several urban beaches were combed for litter and toxic debris.

In the wake of September’s Hurricane Manuel, a total of 9,700 littered objects were found; improperly discarded woods, plastics, rubbers, glass, styrofoam, paper, metal, and medical waste made up piles of hazardous debris. Members of the project divided the items into categories, explains Blasquez; after it was counted and weighed, the debris was correctly eliminated. The leading pollutants were wood and plastic, which made up of 71.39% and 14.81% of the total waste, respectively. Although medical waste accounted for only .68%, syringes holding unknown bodily fluids and opened pharmaceutical products posed a serious threat to both animals and humans. To see how you can help keep the beaches of Guerrero clean, please visit Limpia Guerrero.

Blasquez is a winner of American Photography’s Latin American Fotografia 3.