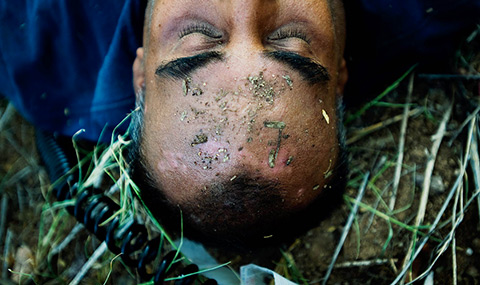 Forty-three year old Acevedo Guadalupe-Herrera from Ahuacatitlan, Guerrero, Mexico, lays unconscious surrounded by medical officials next to a ranch off Elephant Head Road near Green Valley, Arizona, August 8, 2009. Guadalupe-Herrera was found by a ranch hand and was presumed to be dead, although he recovered with the help of IV fluids and medical attention. He had been walking for five days with little water and no food.

After the creation of the North American Free Trade Agreement in 1994, the US made several attempts to stymie and fortify undocumented movement in established crossings zones beginning with the introduction of Operation Gatekeeper in San Diego, and Operation Hold The Line in El Paso, Texas. One intended and reported result of the operation was to funnel undocumented movement into geographically inhospitable areas of the Sonora desert in Arizona in an attempt to deter potential migrants from crossing the border.

As a result of the longer and hotter path through the desert in Arizona, border deaths in this region have increased dramatically. A study by the Bi-national Migration Institute states that from 1990 to 2012, the Pima County Office of the Medical Examiner examined the remains of 2,238 migrants. Of these deaths, over 750 cases remain unidentified. While apprehension numbers have fallen in recent years, deaths throughout the region have not seen a similar reduction. According to the conservative death estimates of the Border Patrol statistics there were 177 deaths in the Tucson region in 2011 alone.—Matt Nager

Having traveled a fair amount through Latin America, Denver-based photographer Matt Nager had a great interest in shooting a story on the border. In 2008, he came across an article about advances in DNA testing to help identify bodies found in the desert of Arizona. That sparked his interest, and he spent the next year researching the issue and the striking numbers of migrant deaths occurring in Southern Arizona.

During the summer of 2009, Nager spent two months working in Tucson and around Southern Arizona. He spent time with Border Patrol and activist groups who help people who are struggling in the desert. Nager spent a week at the sheriff’s office, which is the first official organization called when a body is found. He photographed inside the medical examiners office during an exam of an unidentified body. Additionally, he spent time with and photographed in the mortuary in Tucson where they cremate bodies that have been unsuccessfully identified.

In the years since this project, it appears as if the issue has largely gone unchanged. Statistics show that deaths continue to occur at rates nearing 200 bodies per year. As technology advances, it will undoubtedly become easier to identify bodies. There is now a website, Humane Borders, that documents where each body was found as well as the gender and name of that individual. 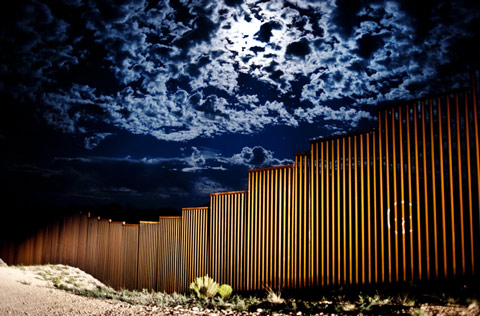 The US-Mexico border fence is highlighted by Border Patrol headlights under a bright moon in Sasabe, Arizona., Friday, June 5, 2009. Building the wall along the border has resulted in migrants following more secluded and dangerous routes where the wall has not been built. 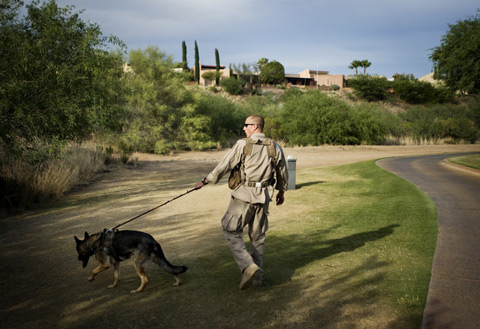 BORSTAR agent Karl LaFevre and his dog Cargo search for tracks of unidentified migrants on a gold course in Green Valley along Interstate 19 in Tuscon, Arizona, Friday, June 5, 2009. The housing development and gold course serve as a final drop off and pick up points for migrants traversing the desert to the United States through Mexico. 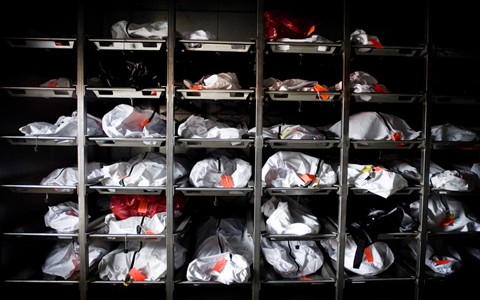 Rows of body bags, many of which contain remains of unidentified bodies found in the desert, sit in an overflow cooler waiting for ongoing identification examinations outside the Pima County Medical Examiners Office in Tucson, Arizona, August 12, 2009. The increase in deaths in Pima County has resulted in an overflow of caseloads for the medical examiner as the identification process can take years for each body. 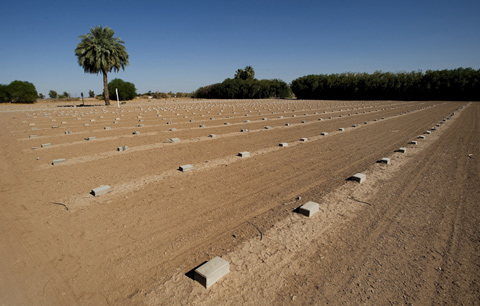 Markers for unknown people, many of which are presumed to be migrants who died while crossing the border, sit at Evergreen Cemetery for burial in Holtville, California, Sunday, August 17, 2009. 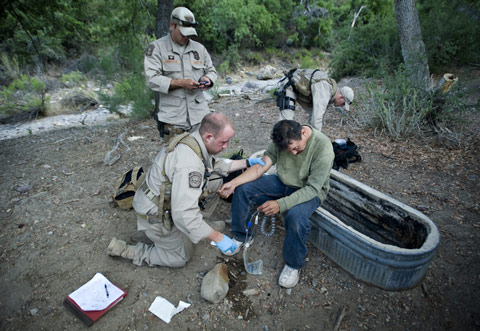 BORSTAR agent Jared Ashby applies medical attention to Victor Manuel Lopez-Galindo after a search and rescue mission two miles into at Elk Horn Ranch in Red Canyon, Arizona, Thursday, June 11, 2009. Lopez-Galindo who presumable was attacked, robbed, and left alone by drug smugglers, started a fire to signal for help and a rescue after hiking five days in the desert mountains with one gallon of water. 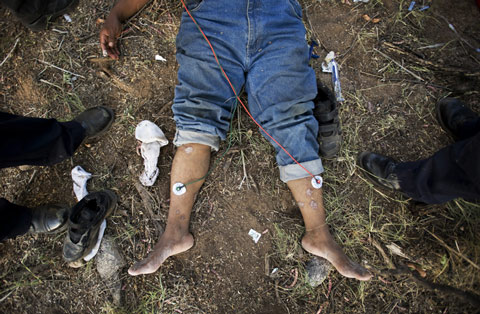 Forty-three year old Acevedo Guadalupe-Herrera from Ahuacatitlan, Guerrero, Mexico, lays unconscious surrounded by medical officials next to a ranch off Elephant Head Road near Green Valley, Arizona, August 8, 2009. Guadalupe-Herrera was found by a ranch hand and was presumed to be dead, although he recovered with the help of IV fluids and medical attention. He had been walking for five days with little water and no food. 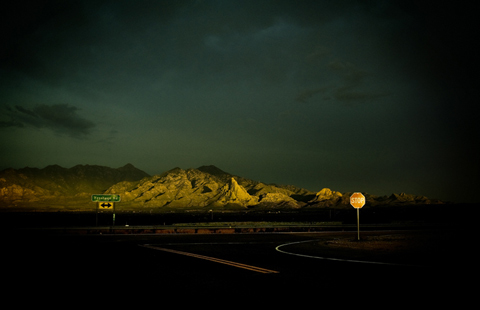 A popular migrant crossing trail and drug smuggling route passes through Mount Wrightson and Coronado National Forest near Green Valley, Arizona, August 3, 2009. Migrants and drug smugglers alike will often hike up to the ridges of mountains to stay clear of being caught by border patrol, sheriffs, and remote sensors, often leading to perilous falls and disorientation. 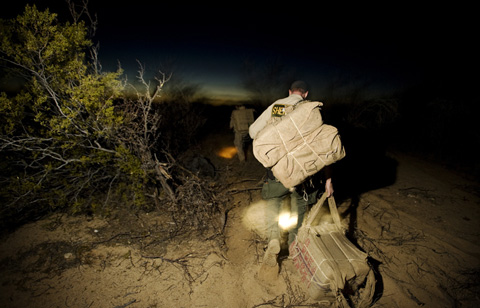 A sheriff transports two bundles of marijuana for inspection after chasing and successfully stopping a jeep load of drugs from passing through the Highway 286 and 86 corridor near Tuscon, Arizona, Friday, June 12, 2009. This region, which includes Interstate 19 from Nogales, is one of the leading drug smuggling zones in the United States. 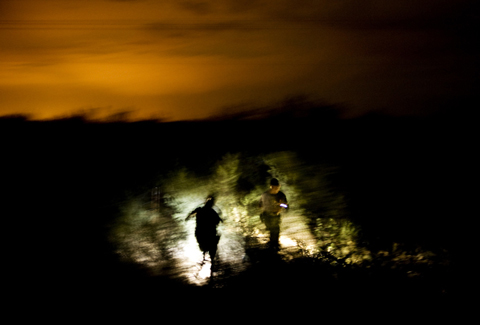 Sheriffs Ryan Pretti (left) and Gary Halkowitz with the Pima County Sheriff Department, Green Valley District, walks along a known migrant trail looking for drugs and lost injured migrants, August 4, 2009. In addition to traffic stops and drug busts, the sheriff department is primarily responsible for responding to dead body calls and body recovery and transfer from the desert to the medical examiners office in Tucson. 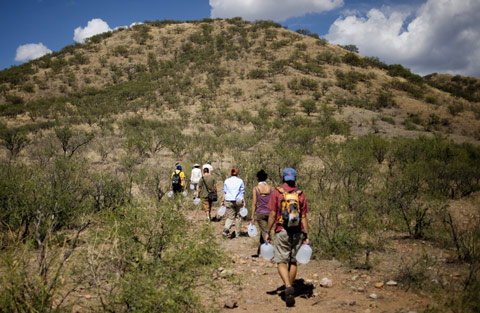 Volunteers of the humanitarian aid group No More Deaths caravan jugs of water to a popular crossing path in Chiminea Canyon outside Arivaca, Arizona on July 21, 2009. The group deposits water and gives medical attention to migrants in need traveling from Mexico through the desert to the United States. 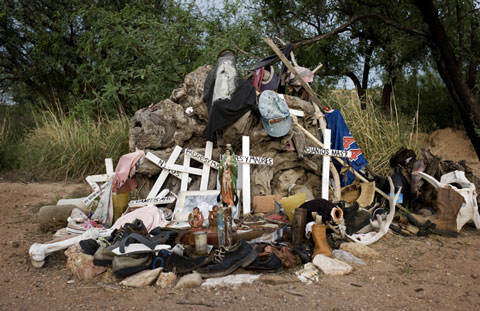 A shrine honoring the lives of those who have died in the desert made of objects and found throughout the desert on migrant trails at the No More Deaths camp in Arivaca, Arizona from July 24, 2009. The group deposits water and gives medical attention to migrants in need traveling from Mexico through the desert to the United States. 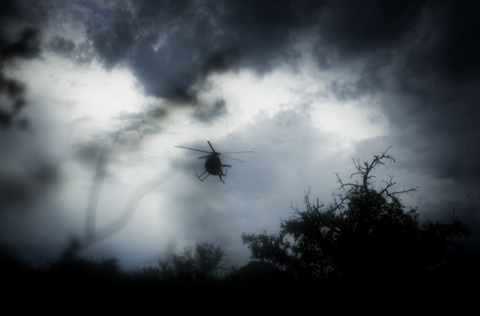 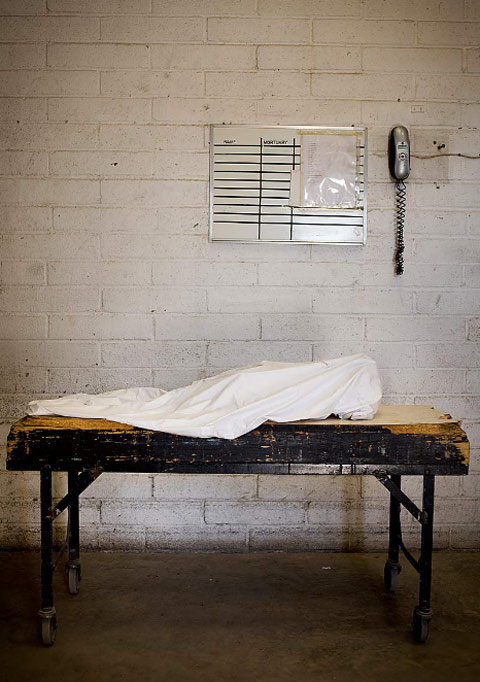 An unidentified body presumed to be of a migrant rests before being prepared for cremation at Adair Funeral Home in Tucson, Arizona, Thursday, August 10, 2009. Bodies are released from the Pima County Medical Examiners Office for burial after it has been concluded that an identification cannot be made. 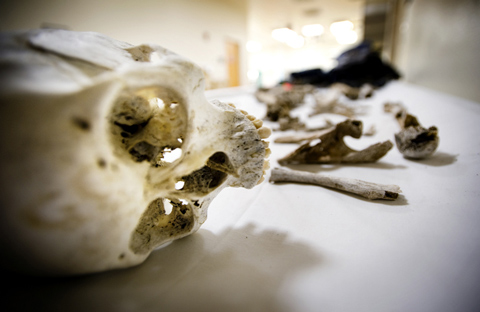 A skull and a partial skeleton of a presumed border crosser discovered by a woman riding her horse in the Avra Valley area near Tucson, Arizona on June 24, 2009 are displayed on an examination table at the Pima County Medical Examiners office in Tucson, Arizona, Wednesday, August 5, 2009. The person is thought to be a male and has been dead for at least a year. No identification was found with the bones. 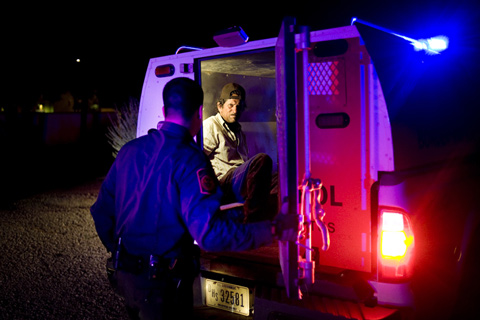 An undocumented migrant looks out the back of a Border Patrol vehicle after being spotted by a citizen and reported to officials near Green Vallery, Arizona, August 9, 2009. In addition to traffic stops and drug busts, the sheriff department is primarily responsible for responding to dead body calls and body recovery and transfer from the desert to the medical examiners office in Tucson. 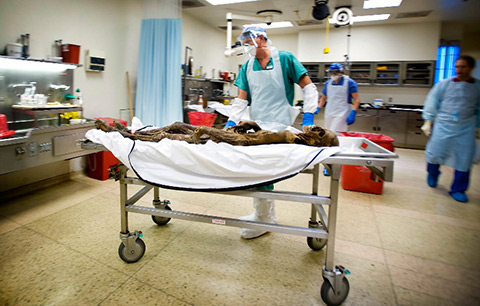 Assistant Louie Goad moves the corpse of a presumed migrant found on the Tohono O’odham reservation near Cockleburr Village on August 2, 2009 in place for an autopsy examination at the Pima County Medical Examiners office in Tucson, Arizona, Wednesday, August 5, 2009. The person is thought to be a man and an identification card was found 30 feet from the body which might be his. 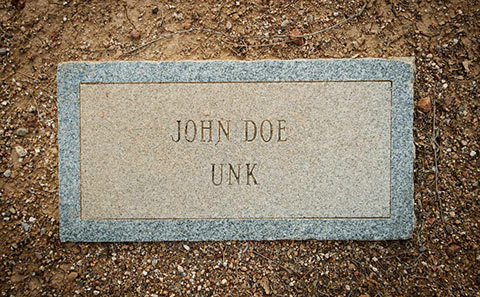 A marker of an unknown person sits at the Pima County Fiduciary Cemetery at Evergreen Cemetery for burial in Tucson, Arizona, Tuesday, August 12, 2009. Prior to 2004, the county would bury the remains of unidentifiable bodies found in the desert after identification exams proved unsuccessful.