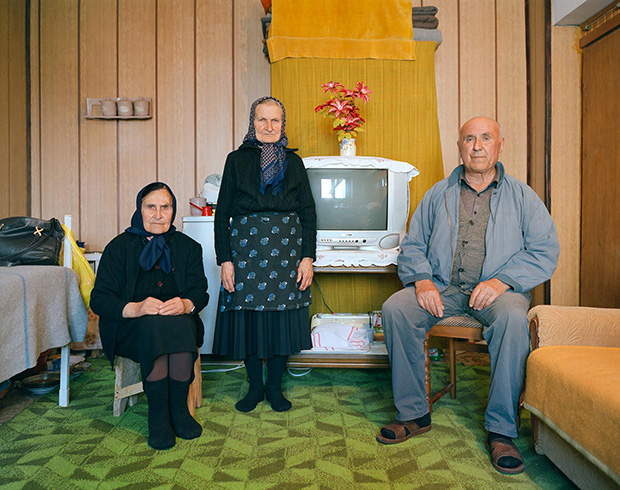 For his 2013 book Kosovo, Swiss photographer Bertrand Cottet explores the emerging country of Kosovo, beginning with its independence in 2008. He was drawn to the area after befriending some of the many Albanian refugees forced out of their homes during the Kosovo War and through the course of Serbian President Slobodan Miloševic’s time in office. Cottet explains that for this project, he slowed down from his usual fast-paced process, concentrating on creating iconic imagery that spoke to the history and uncertain future of the country.

Cottet made five trips to Kosovo, shooting for a total of approximately fifteen weeks over a span of four years. Despite the country’s relative lack of organized leadership, the photographer felt entirely safe. He encountered local and international police, NATO troops, and various organizations, yet throughout his visits, he felt welcomed by the people and free to work as he wished.

This image finds a Serbian family, composed of a husband, a wife, and her sister, who were forced out from their home in southern Kosovo at the time of the war. They now live in Leposavic, a region in North Kosovo that houses a majority of ethnic Serbs, in a one-room home. Since they are unemployed, they depend entirely upon aid from the city of Belgrade. Cottet stayed in the area for a week, encountering a few Serbian nationalists hoping to reclaim portions of Kosovo. He writes, “Tensions there between the two communities are quite obvious and happen regularly.”

Cottet is represented by Bloom, a Paris, Lyon, and Lausanne-based artist agency specializing in innovative and emerging talent.