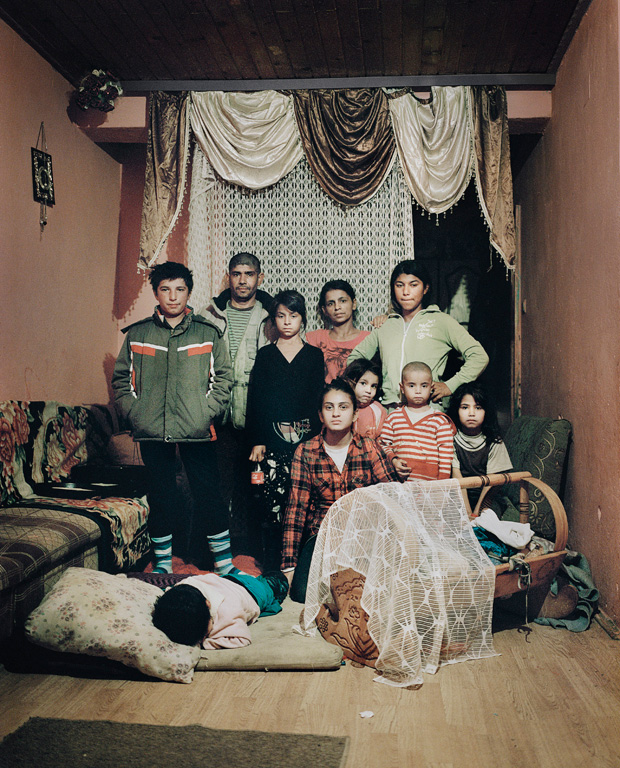 Savete Jahovic, her husband Hajrulla, and their 10 children share a small flat in the Roma neighborhood, which is located south of the river Ibar. To feed their family, they receive 100€ welfare a month from the Serbian municipality in the north. “As a Roma in Kosovo, it is impossible to find a job,” claims Hajrulla. Even though they receive more support from the Serbian community than from the Albanians, they do not feel accepted by either side. 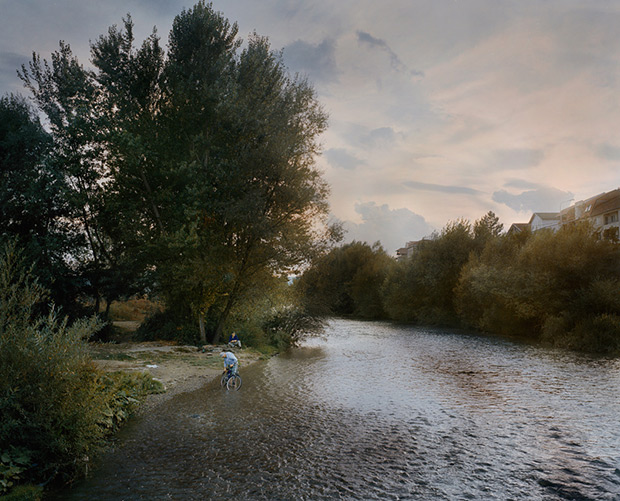 Across the River is Jasper Bastian‘s long-term project examining the tense and divided city of Mitrovica located in the northwest portion of Kosovo. Once one of the richest cities in the former country of Yugoslavia, the struggling town is now split in two from ethnic tensions, political upheaval and painful memories. While South Mitrovica claims to belong to the independent state of Kosovo, North Mitrovica still vows allegiance with Serbia. The River Ibar runs through the center as both a physical and idealogical barrier, the people there separated and suspended in a constant state of uncertainty and distrust from both sides. Bastian examines this splintered city as a microcosm of the complicated history of the region as a whole, telling stories of the everyday citizens who suffer in the wake of war and political corruption.

Declaring independence in 2008, Kosovo was recognized by 102 of the 192 members of the U.N. However Serbia, Russia and other imposing nations have refused to acknowledge Kosovo as a state, leaving people in places like Mitrovica to feel unsafe and helpless in their own homeland. The city now has a 60% unemployment rate with young people trying to leave in droves. Healthcare is put on hold, political systems are muddy and residents are afraid to cross from one side of town to another. Of the three bridges connecting the city, only one allows open access. Across the River illustrates that bad blood cannot be easily forgotten, both the Kosovo-Albanian and Serbian sides unable to reconcile who is the victim and who is the perpetrator. With random acts of violence in constant threat of breakout and a general undercurrent of suspicion permeating the landscape, the series gives voice to the people most affected by the political maneuverings of world powers. In order for Mitrovica to be saved, both sides must work together. However with wounds still fresh from the Kosovo War and tensions at an all time high, the divide feels much farther than the width of a river. 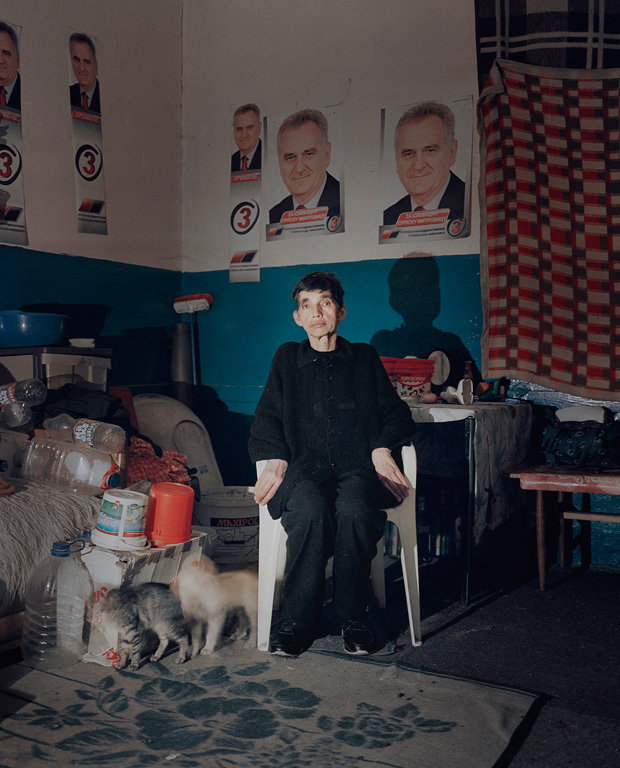 In 1999, Mashic Biserka lost everything all at once. Her house south of the Ibar was burned down by fighters of the “UCK” (The Kosovo Liberation Army). Since then Mashic lives alone with her cats in a former school building in the north of the city. Her tiny room has neither constant electricity nor water supply. Just before the communal elections in November 2013, Mashic was offered money and food, if she would cast her vote for the mayor’s party. Mashic refused. 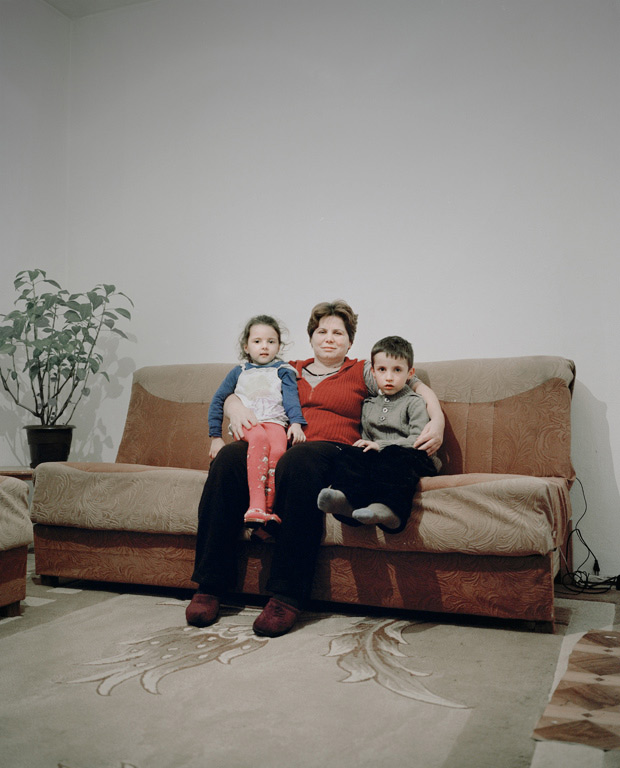 “There is no chance for me to see a special doctor. I will never know what it is that is giving me such pain,” Saime Haziri laments. Since 2009 the Kosovo-Albanian woman has been suffering from a mysterious skin disease, which covers her body with painful black spots. She visited several local doctors when the ailment first appeared, but they were unable to help her. The doctors recommended Saime to visit a specialist in Pristina, the capital of Kosovo. Saime, however, cannot possibly afford the two-hour trip. She suspects the lead and chemical pollution in the Mitrovica area to be the cause of her illness. 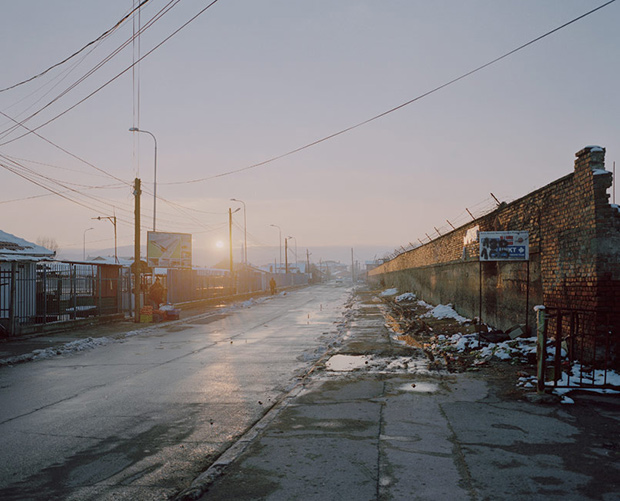 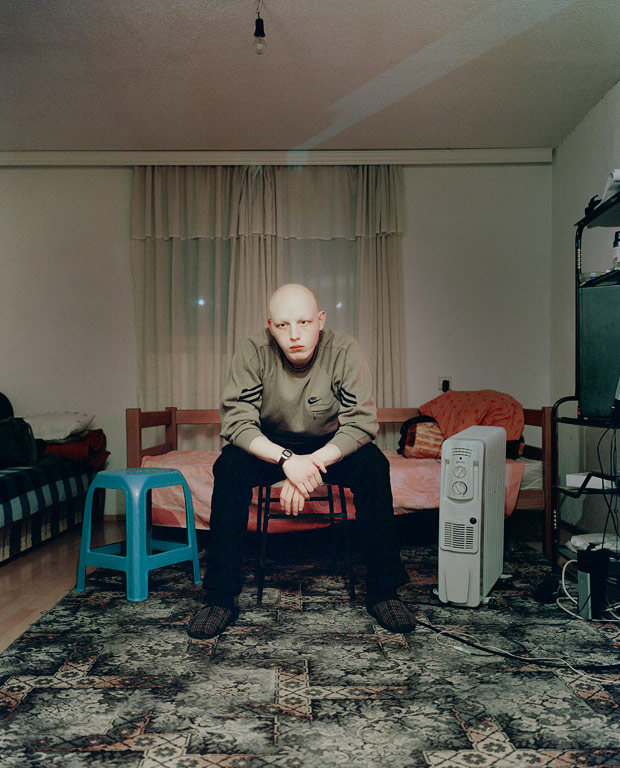 Aleksandar moved to the northern part of Mitrovica to study at the university. Together with his family he is one of the last 40 Serbs who still make their home in the Kosovo-Albanian capital Pristina. Before the war, approximately 40,000 Serbs lived in Pristina. Aleksandar is uncertain about his future prospects. He claims, “As a Serb in Kosovo, no one really cares about you.” 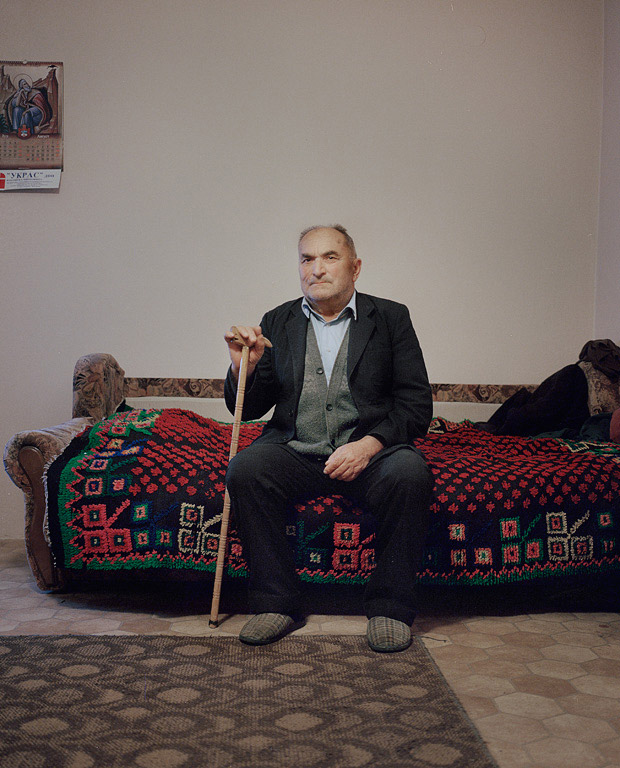 Radoica, 69, worked together with Albanians for the Trepca mines for most of his life. With almost 25,000 employees, the mining complex was one of the largest companies in Yugoslavia. Due to the abundance of precious minerals, such as lead, zinc and silver, the mines enabled Mitrovica to become a prosperous city.

He argues that America has torn the former Yugoslavia apart, creating separate countries and instigating conflicts. Since the conclusion of the war, he has been afraid to cross the bridge to the Albanian side of the city out of fear of the possible reactions of the young Albanians. Most of his friends from the past have long since left Kosovo to central Serbia. 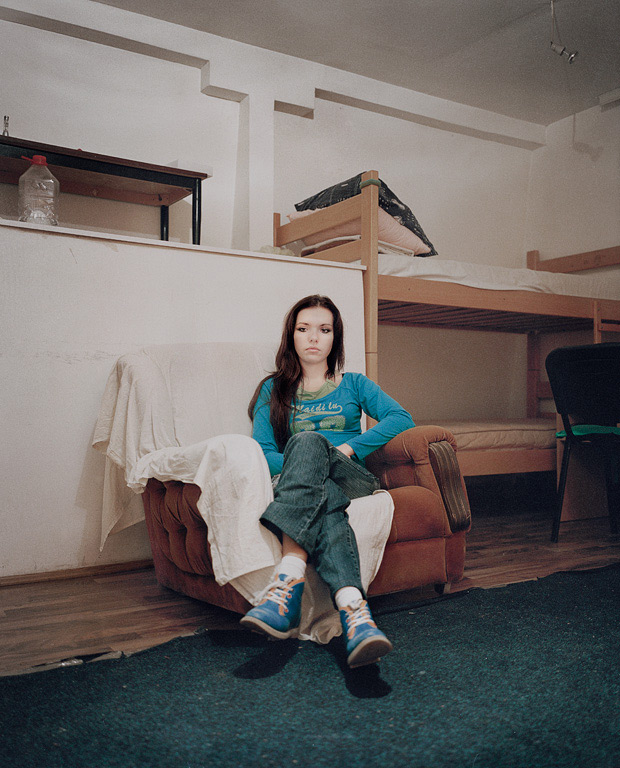 Before the municipal elections in Kosovo in November 2013, Serbian extremists intended to force a boycott of the election in the north of Mitrovica. Despite the tense conditions Jelena Safirovic (23) decided to participate in the voting.  It took all of Jelena’s courage to pass through the shouting crowd in front of the polling station to cast her vote. When she left the station she found a film cameras in her face, accompanied by a wave of even more insults. After this experience, Jelena says she never wants to vote again. 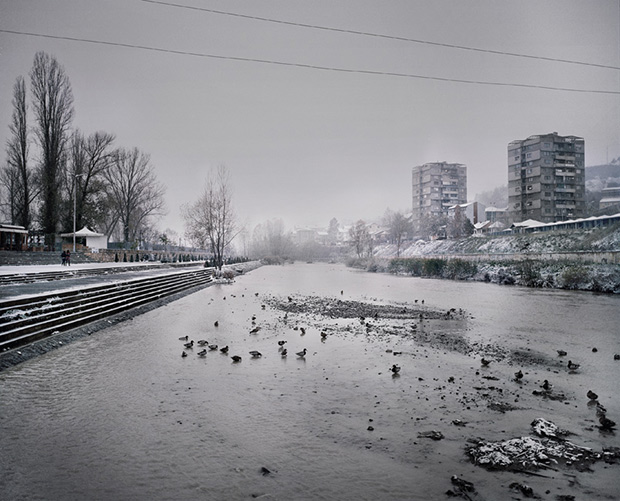 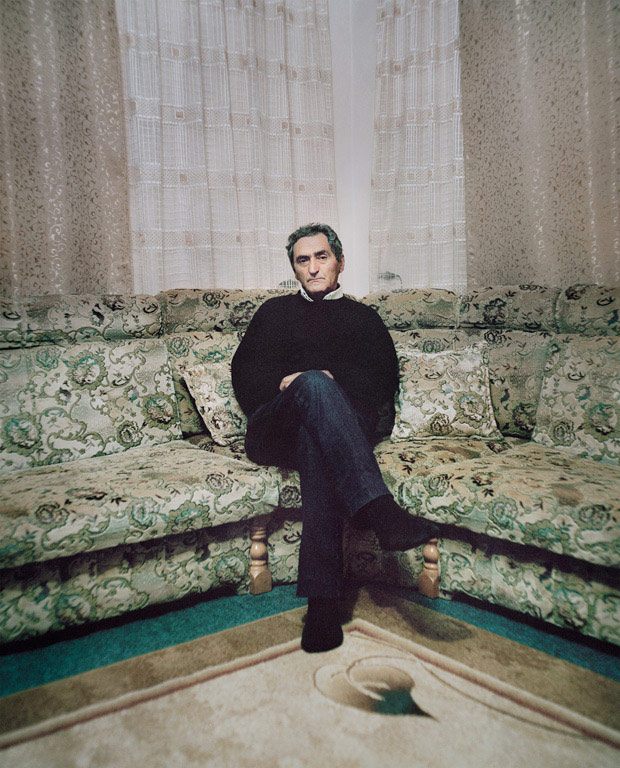 During the war in 1999, August was arrested by the Serbian military in front of his wife and children. For over a month, he was severely tortured because they believed he could reveal information about the secret plans of the Albanian “UCK” (The Kosovo Liberation Army). But Agush didn’t know anything. Today his health is impaired by the consequences of the imprisonment. 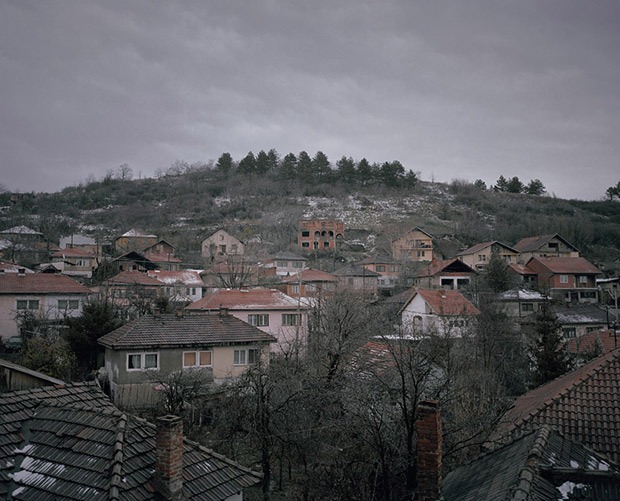 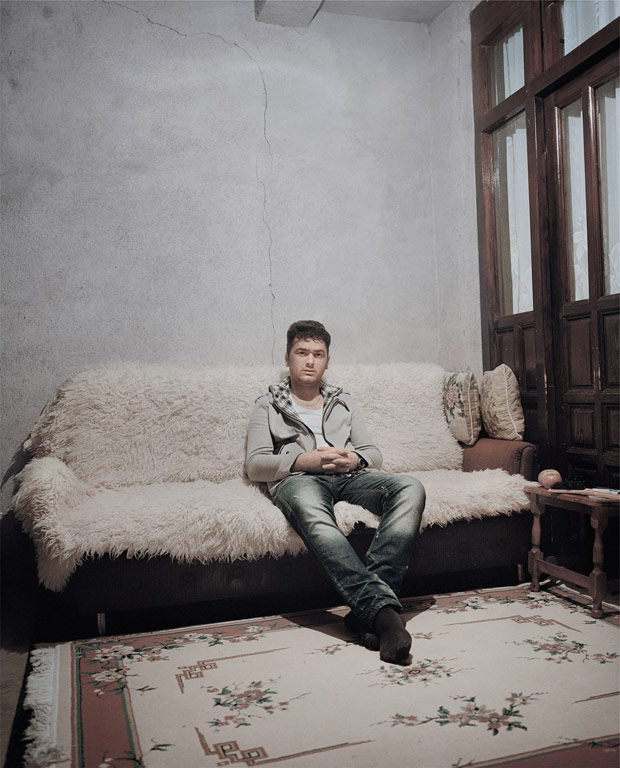 Sejda Xhemaijli works night and day in a little restaurant in the center of southern Mitrovica. Nine to ten hours a day, six days a week, he grills sausages and meat patties for a monthly salary of 200 Euros. He states that he at least has a job while most of the people in his country are unemployed. The “Kosovo Agency of Statistics” declares that Mitrovica has an unemployment rate of approximately 60%. 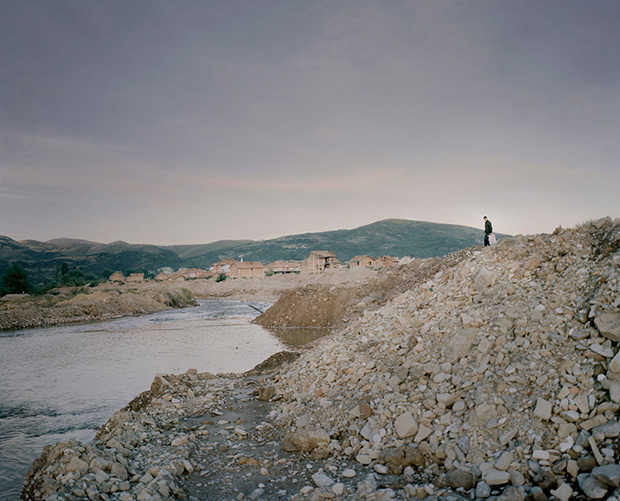