A New Exhibition Looks at Our Complex Relationship with Animals 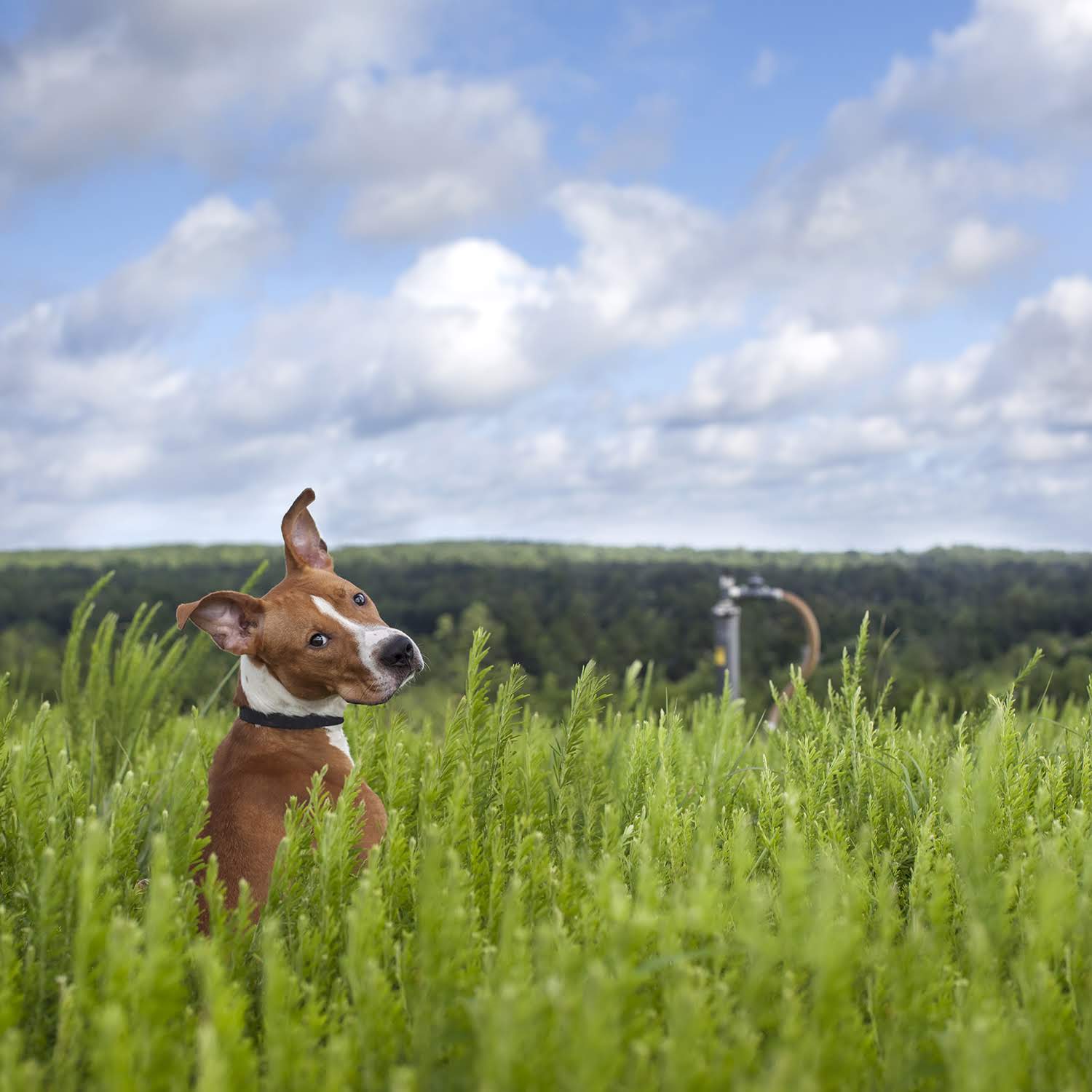 Karsten, impoundment #87239. Karsten was an 11-month male Labrador/hound mix was a stray. He was brought to the Wake County Animal Center in Raleigh, NC on 4/20/13. Karsten was adopted on 8/13/13 after spending 78 days in the shelter, and thirty-seven days after being photographed at Landfill Park. © Shannon Johnstone

In 2013, Shannon Johnstone met a puppy named Karsten at the Wake County Animal Center in Raleigh, North Carolina as part of her long-term project Landfill Dogs, a series of photographs of shelter dogs who are at risk of being euthanized.

Karsten was a great dog, but he was young and big. He also had lots of energy, which meant he’d be harder to adopt. “Not long after his photo shoot, Karsten ended up in quarantine,” the artist remembers. “The note in his file read ‘Quarantined for rambunctious behavior.’”

Johnstone left Karsten’s photo shoot that day feeling sad and worried that he wouldn’t find a home. In his portrait, he’s sitting in the grass, looking back at the photographer under a cloudy sky. His expression is hopeful, but it’s also solemn.

Despite the nuances of the work, Johnstone initially had trouble getting people to care about dogs like Karsten. “When I began Landfill Dogs, I attended portfolio reviews and consultations with curators,” she remembers. “I was disappointed to hear that my photographs would never be anything but dog portraits.

“I was told by more than one individual that because of the subject, the photographs needed something else, some other twist to ‘elevate’ them. This really bothered me. Why can’t a portrait of a dog be just as important as a portrait of human?”

Now, an exhibition of five female artists is hoping to shift the narrative. With support from the Culture and Animals Foundation, Johnstone, Lee Deigaard, Jo-Anne McArthur, Traer Scott, and L.A. Watson have come together under one roof to examine the dignity, individuality, and worthiness of animals.

“The invisibility and disposability of animals is exactly why this exhibition is so important,” Johnstone tells us.

All Creatures Great and Small opens today at Meredith College in Raleigh, North Carolina, where Johnstone teaches. Lisa Pearce, the Director of Meredith College’s Frankie G. Weems Gallery, curated the exhibition, which includes photographs from Johnstone, Scott, and McArthur, along with video work from Deigaard and Watson.

In keeping with the title, the show includes “companion animals,” but it also includes “farmed animals.” McArthur has documented the suffering of many of these animals around the globe, exposing the brutality of slaughterhouses and farms where animals are raised and exploited.

She’s also visited sanctuaries where rescued animals are permitted to live full, happy lives. In this exhibition, the images of violence and exploitation are paired with the joyful sanctuary photos–revealing the drastic effects of our daily choices on the wellbeing of animals. 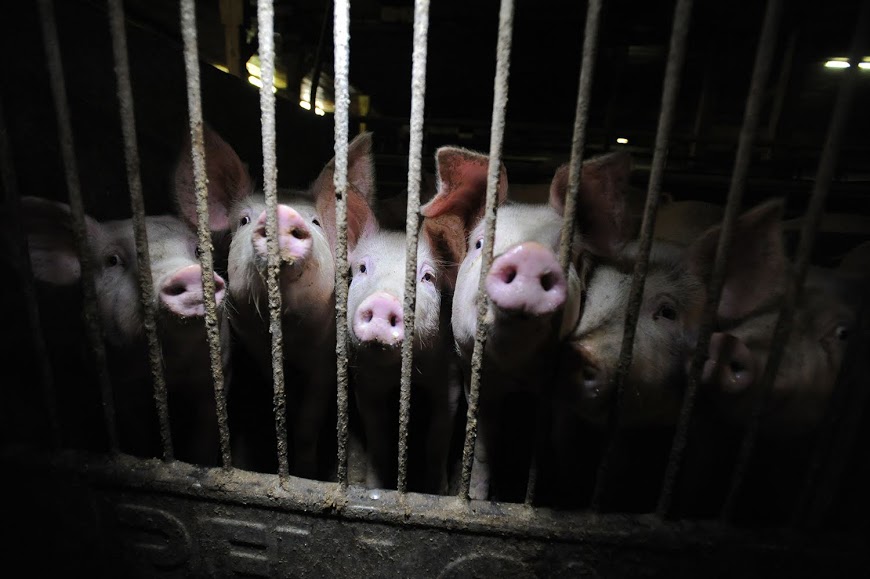 Pigs Crowd Together Behind Bars Inside a Finnish Factory Farm (Jo-Anne McArthur, Oikeutta Elaaimille). Over 150,000,000 pigs are raised in factory farms and killed for food each year. They are well documented to be exceptionally intelligent animals with cognitive abilities comparable to a human toddler. On industrial farms, many piglets are born to mothers in gestation crates, cages that confine the sow so restrictively that she cannot turn around. After piglets are born, most farms clip their front teeth and tails and castrate the males on the spot without anesthesia or pain medication of any kind. The pigs are then raised isolated by cage or in packed groups in dark warehouses where the stench of feces and urine is overwhelming. Though pigs can live upwards of a decade, most are sent to slaughter sometime after they are only four months old. 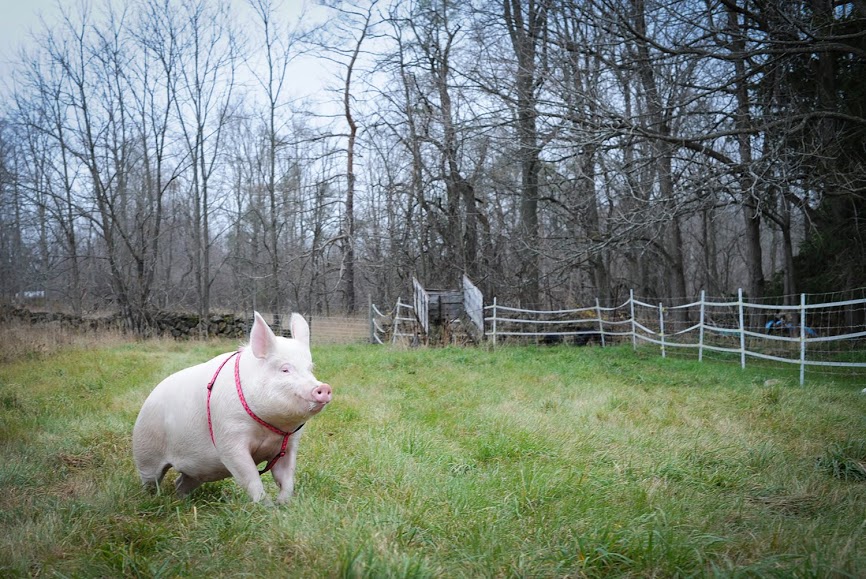 Ether the Wonder Pig At Her New Home (Jo-Anne McArthur, WeAnimals). Internet star and ambassador for animals Esther the Wonder Pig was adopted by a Toronto couple who were told she was a mini-pig. Esther is in fact a commercially bred sow who now weighs nearly 700 pounds. After learning about factory farming and deciding to go vegan, Esther’s dads Steve and Derek founded the Happily Ever Esther Farm Sanctuary in Ontario, Canada.

Meanwhile, Scott’s series Nocturne and Raptors give voice to wildlife and underscores the importance of conservation, while her black and white photographs of shelter dogs remind us of the many companion animals who face uncertain futures.

Like Johnstone, Scott has met and bonded with dogs who were later euthanized. In this exhibition, her portraits of these deceased dogs sit beside images from Johnstone’s project Stardust and Ashes–a series of cyanotypes made using the ashes of euthanized shelter dogs. 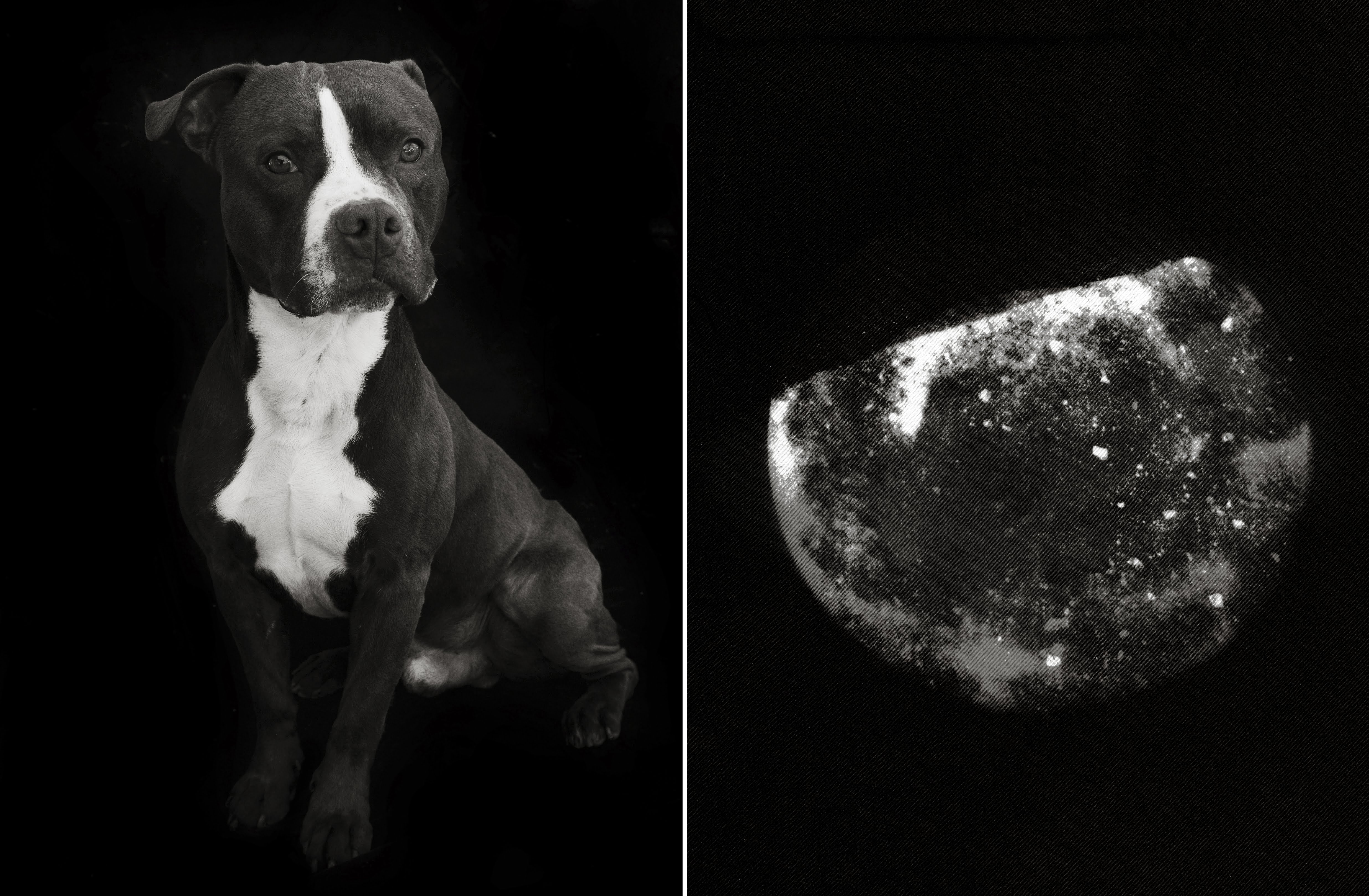 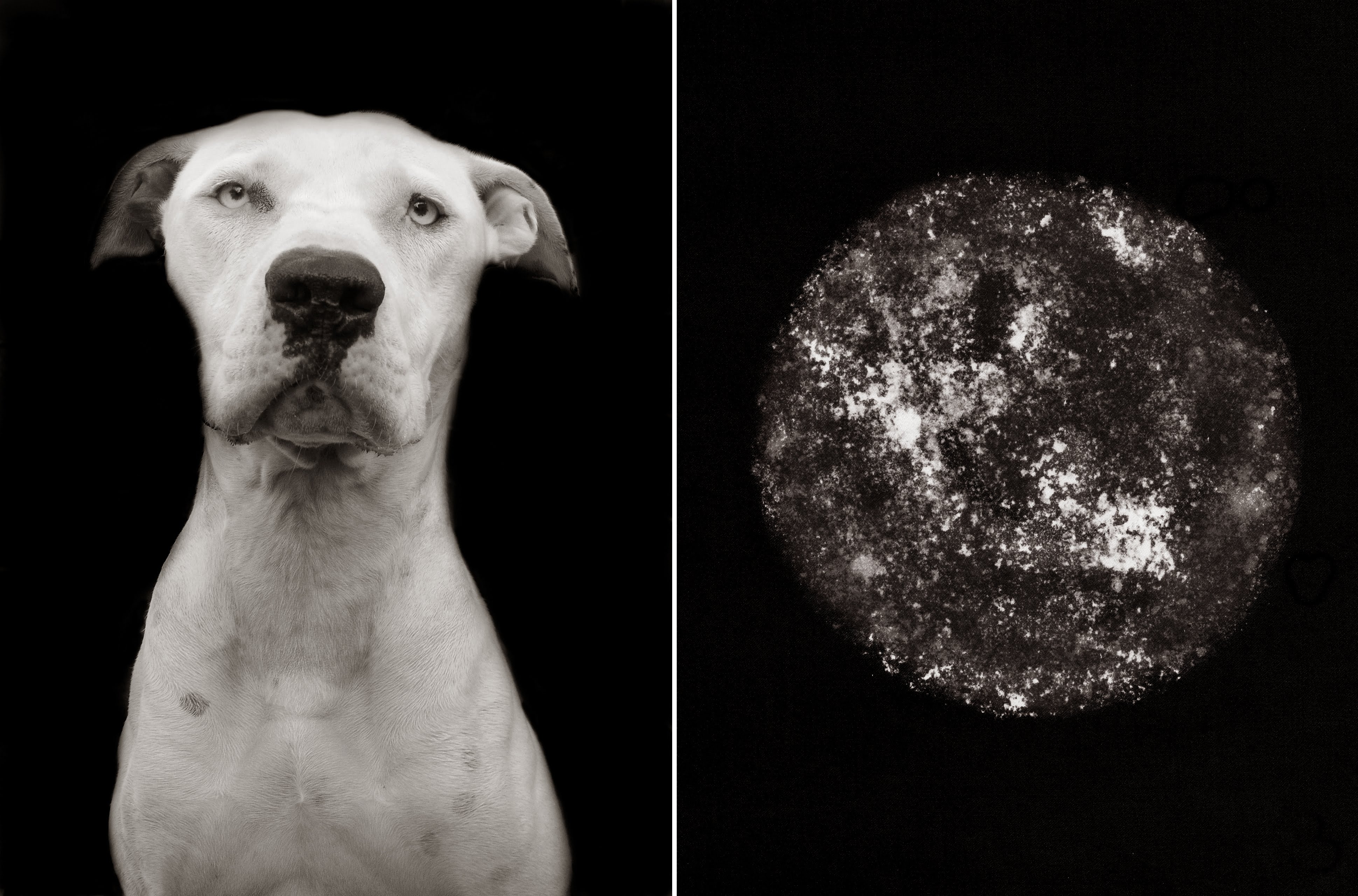 Though it’s about animals, this is also an exhibition about humanity–and it’s one that warrants careful time and consideration. Pearce has included a bench where people can sit and take everything in, and she might be considering the addition of post-its or a message board for visitors to share their thoughts.

Prussian blue murals from the Stardust and Ashes series have also been installed in the gallery skylights. “For me, laying on the floor of the gallery and looking at them was one of the most magical moments,” Johnstone tells us.

“This work is all about mourning for euthanized shelter animals, and I have always felt that the work should be illuminated in some way, preferably with natural light. When I saw them light up above me, I was enchanted. I thought of my love and hope for the ones that got left behind.” 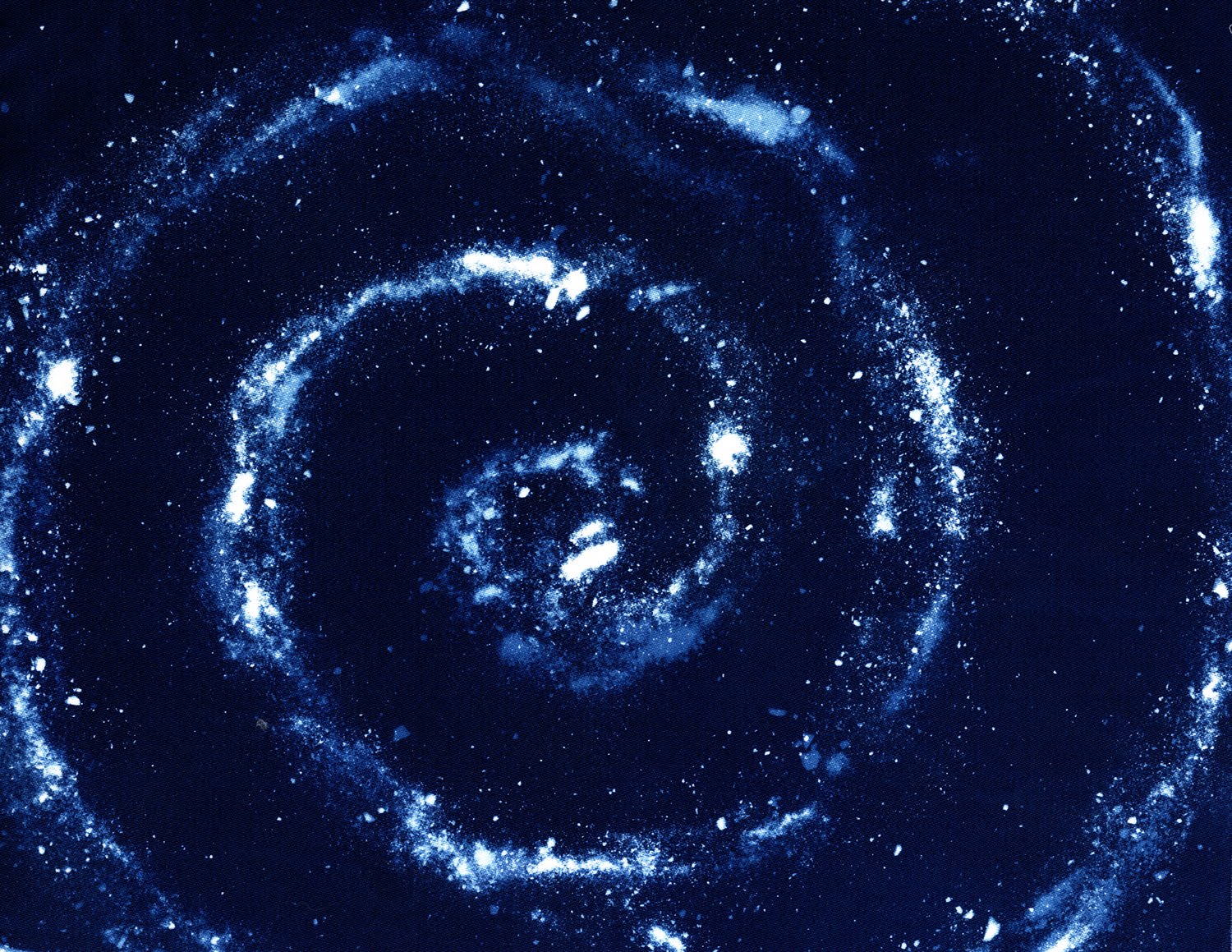 Stardust and Ashes #71. Cyanotype made with sunlight and ashes of euthanized animals from an animal shelter in rural North Carolina. © Shannon Johnstone 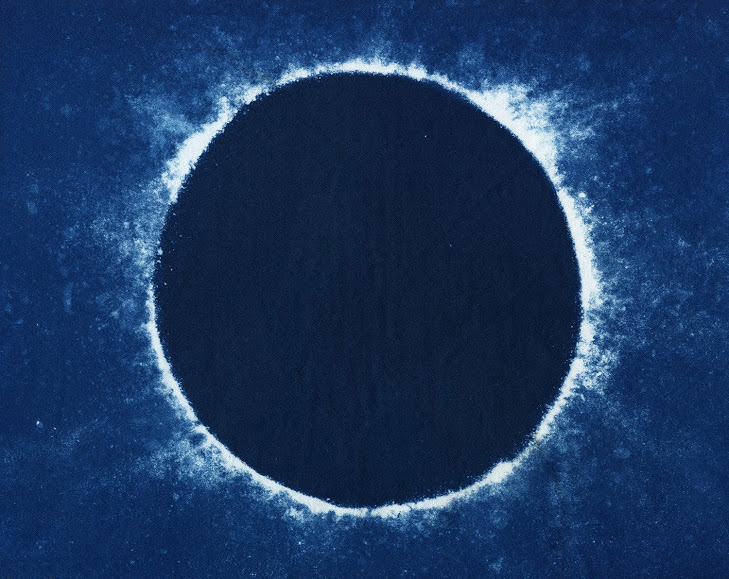 Stardust and Ashes #121. Cyanotype made with sunlight and ashes of euthanized animals from an animal shelter in rural North Carolina. © Shannon Johnstone

Throughout the gallery, visitors will mourn–but they will also discover rays of hope. When Karsten was quarantined all those years ago, Johnstone thought it unlikely he’d ever make it out of the shelter, but an experienced foster stepped up to take him in after seeing his portrait in Landfill Dogs. At first, he was “shut down” emotionally, but in time, his affectionate personality revealed itself.

“Karsten’s story reminds me of the tale of The Velveteen Rabbit, where one is made real through the love of another,” Johnstone tells us. “And that kind of love is a two-way street. What I love about Karsten’s journey is that it is a story of salvation and redemption.”

In some ways, the same could be said about the exhibition as a whole. Humankind’s relationship with animals is complicated–defined often by indifference but sometimes by love. Our decisions determine whether animals have sustainable lives or unbearable ones–and they also determine whether they get to live at all. All Creatures Great and Small is a timely–and timeless–reminder that we always have a choice.

See All Creatures Great and Small at Meredith College now through November 10, 2019. Join four of the artists 4:30 PM on October 24th for a panel discussion, moderated by Dr. Keri Cronin, author of Art for Animals. 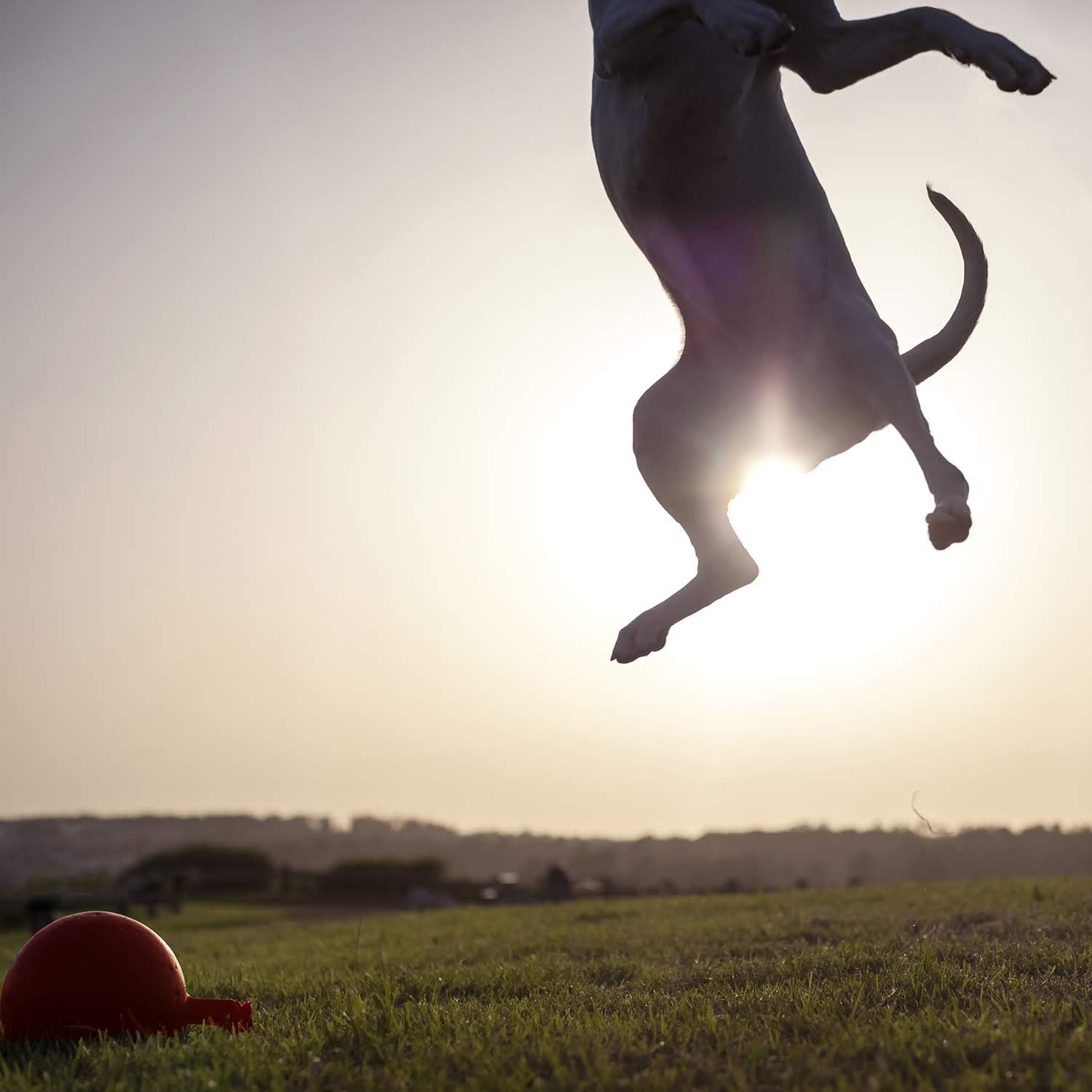 Lady Bell, impoundment #113184. Lady Bell came into the Wake County Animal Center on 1/7/15 as a 1-year old, very energetic mixed breed with no training. Lady Bell has had a rough time finding a home. She was adopted, but quickly returned for being more work than the adopter was prepared for. Next, she was transferred to a rescue, but returned for the same reason. Since that time, a loving foster family has taken her in, put her through training and is committed to finding the right home for her. An ideal home for her would include proper exercise, no kids, maybe an easy-going boy dog to play with, and a human who will see the gem she’s become, appreciate her vigor for life and not give up on her. Lady Bell is now 5-years old and still looking for a forever home. © Shannon Johnstone 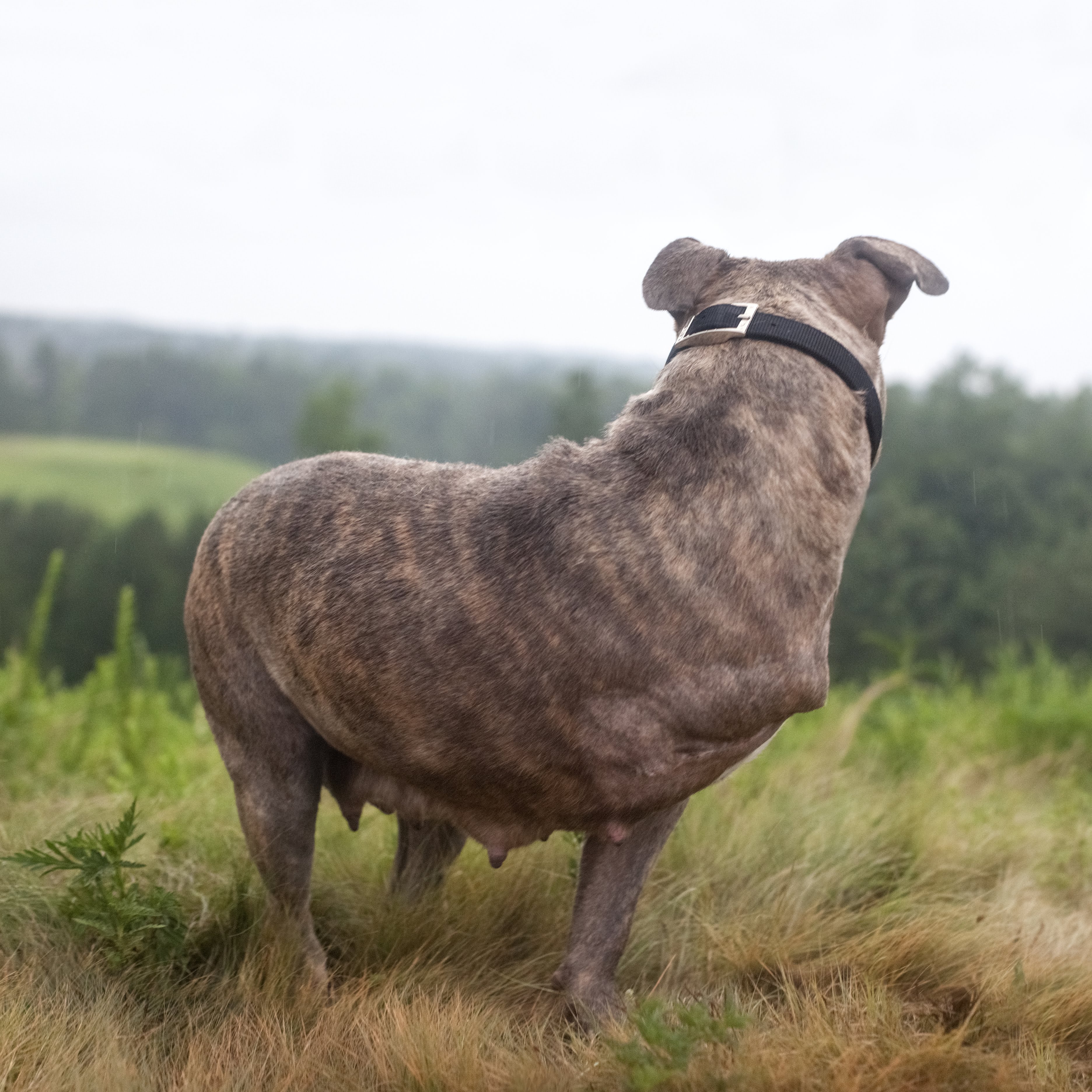 Chanel, impoundment# 105541. Chanel was a young pit bull mix who came into the Wake County Animal Shelter on 6/1/15 with an irreparable leg injury. Her leg was amputated at the shelter, and she recuperated in foster care with lots of TLC for eight weeks. Chanel spent a total of 56 days in the shelter system, and was sent to rescue on 7/27/15, 14 days after being photographed at Landfill Park. © Shannon Johnstone 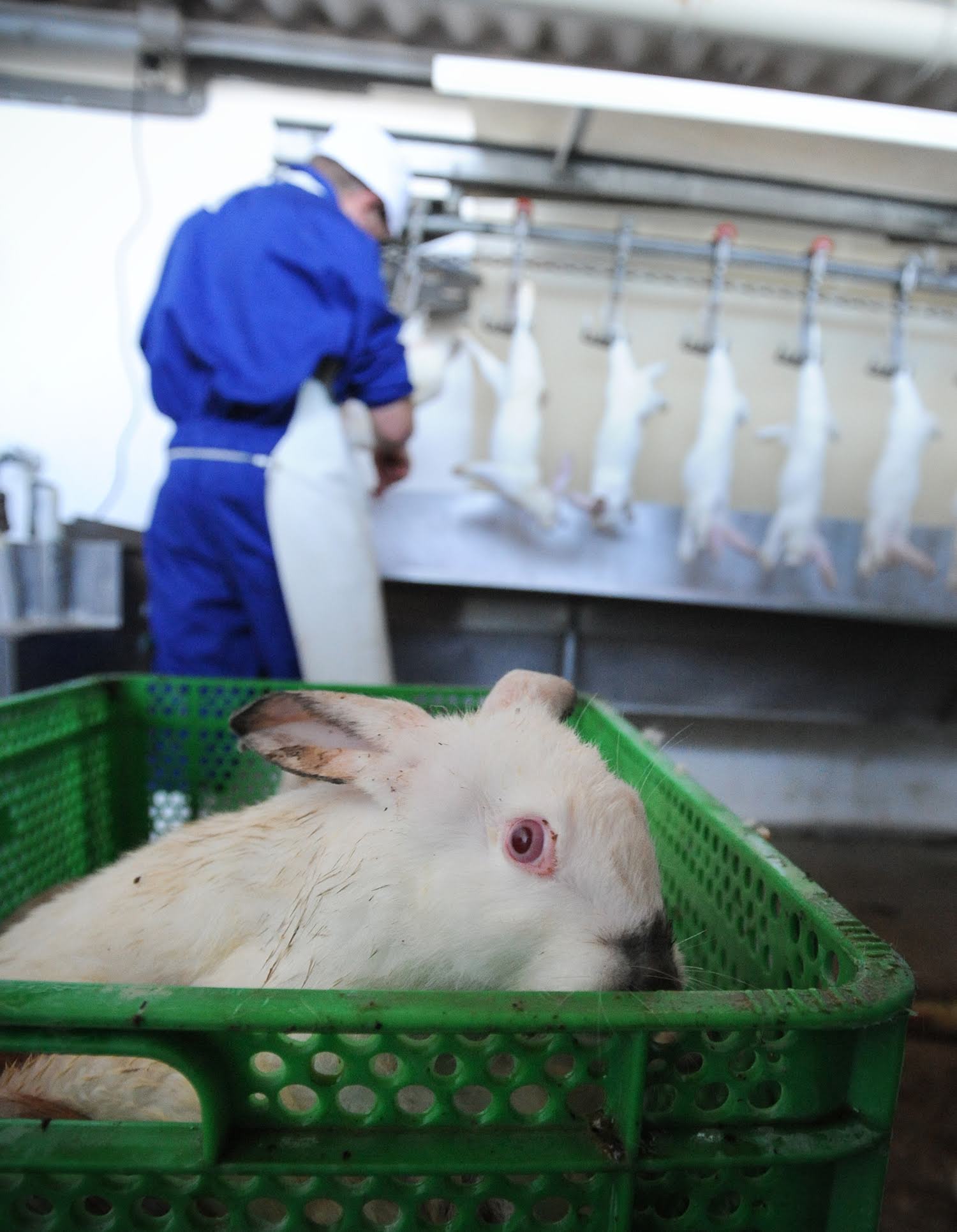 The Last Rabbit in the Crate (Jo-Anne McArthur, Animal Equality). The last rabbit looks out from a plastic crate as a worker slits throats of hanging rabbits behind. 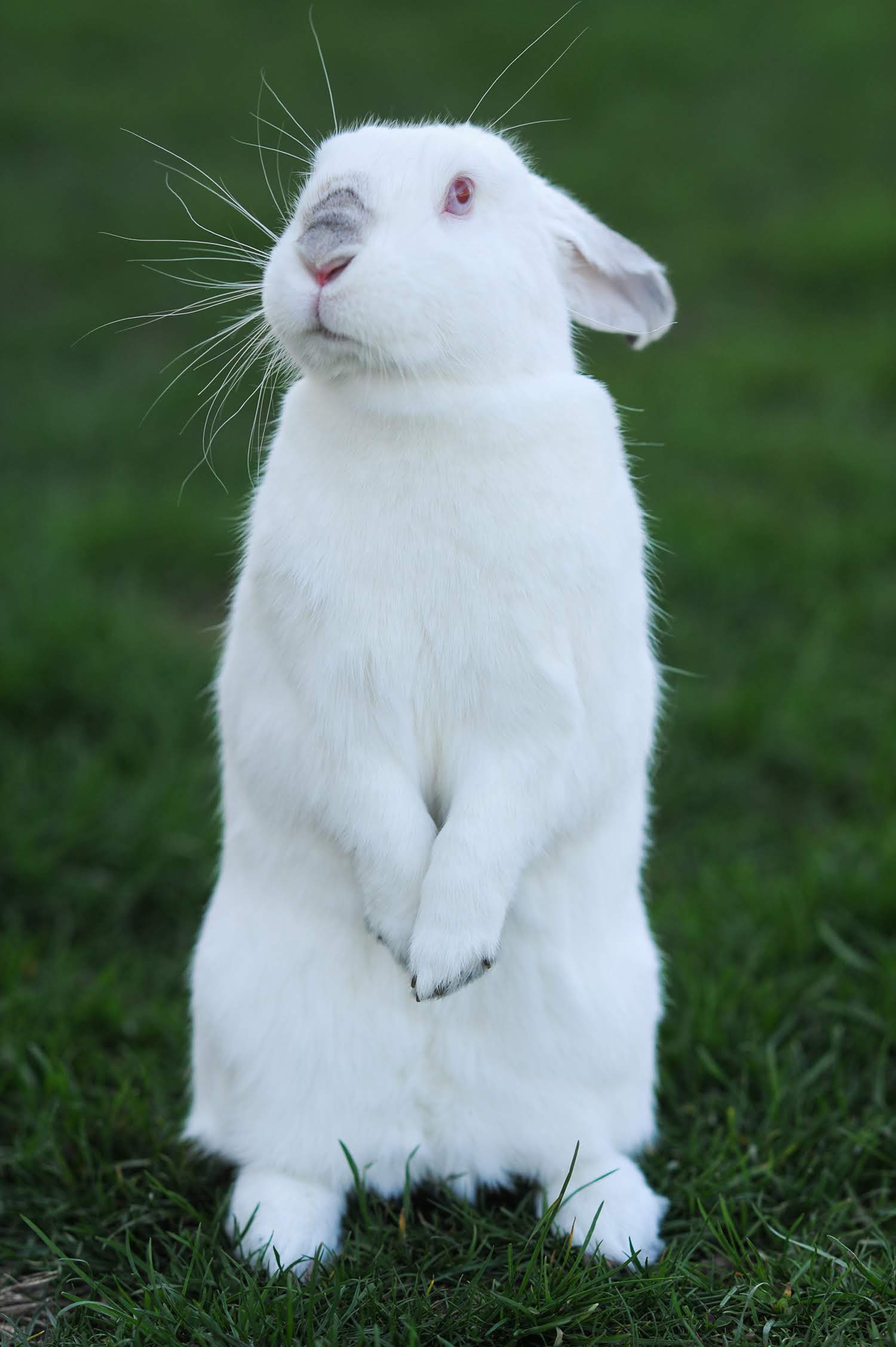 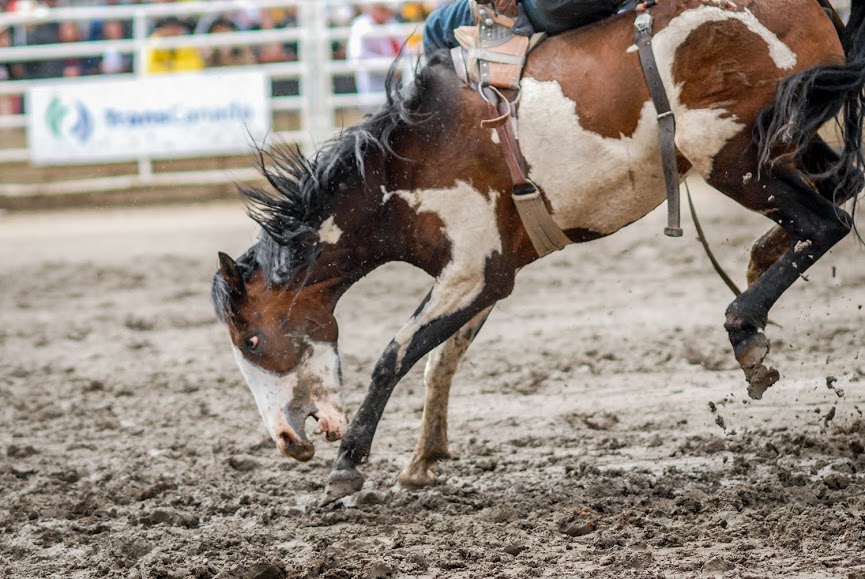 Terrified Stallion Attempts to Buck Off His Rider During Saddle Bronc Competition (Jo-Anne McArthur, WeAnimals). The Calgary Stampede hosts a yearly parade and rodeo where thousands of visitors come to watch and participate in events such as calf roping, bull riding, tie-down roping, youth calf riding, and bronco riding. Injuries to animals and humans alike are commonplace. 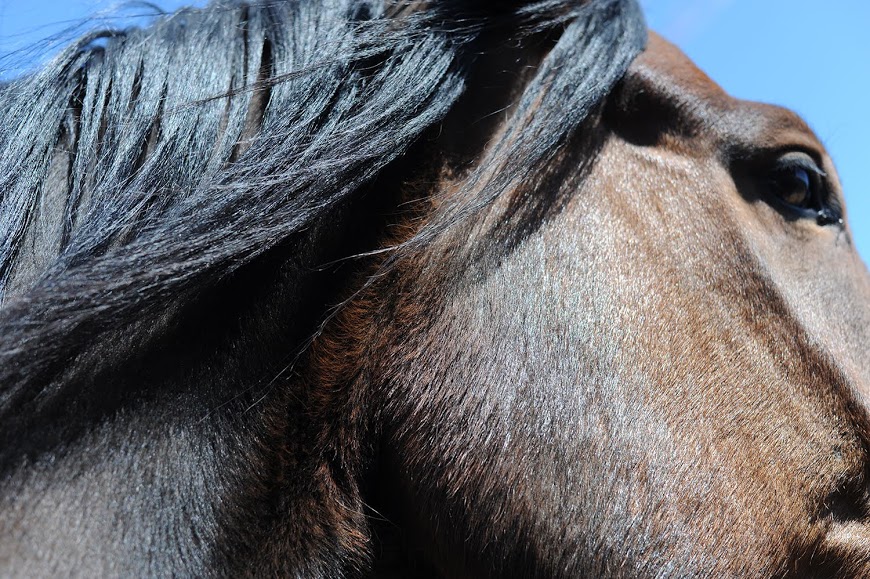 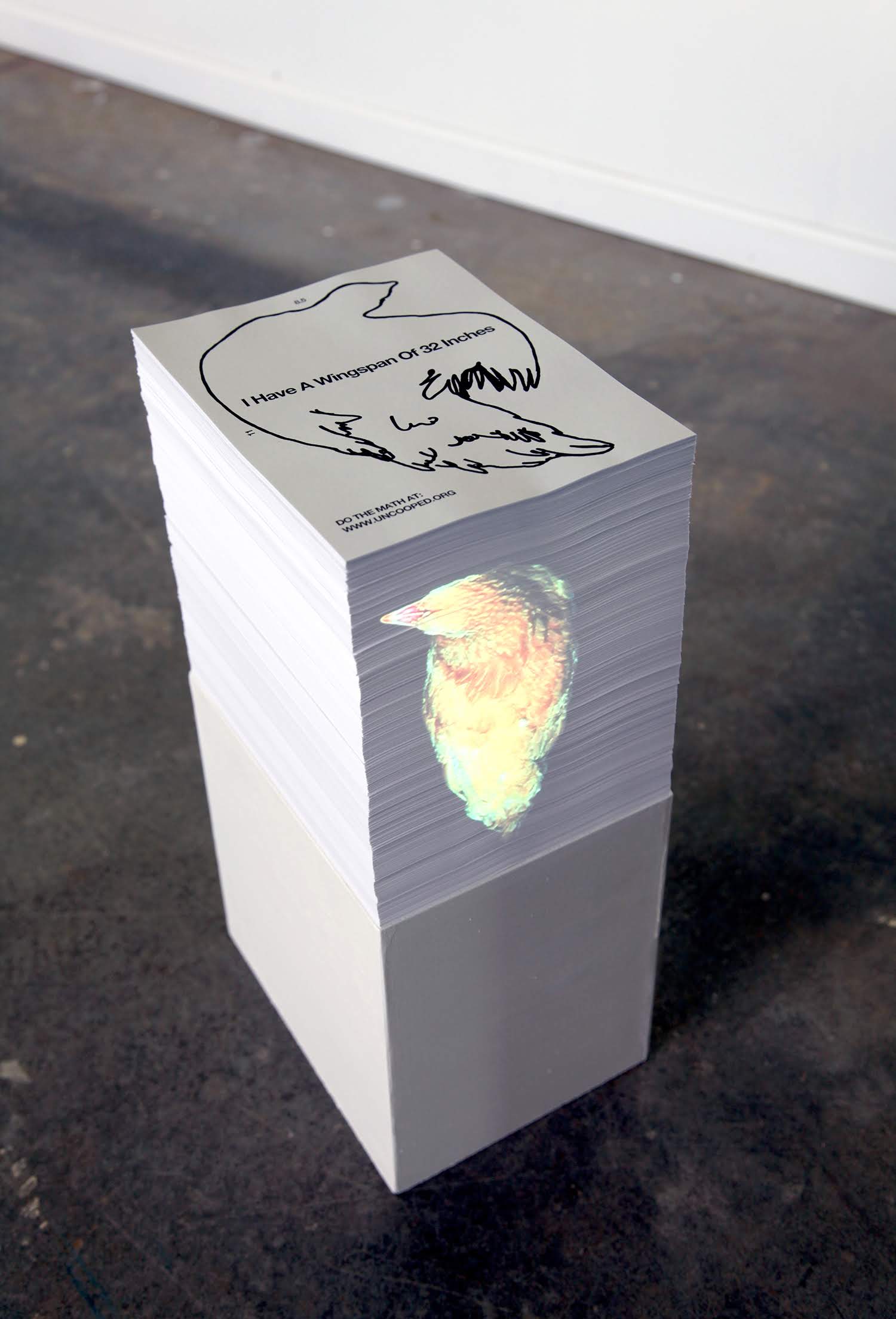 “L.A. Watson’s ‘Uncooped’ projects a video of a hen onto a pedestal with a stack of papers. Each paper contains facts about the limited space and cruel conditions laying hens are forced to live in. Viewers are invited to take a paper from the stack to better understand the dire situation these hens are in. Ultimately if the viewers take enough of the stack away, the projection of the hen is freed from the contained area.” 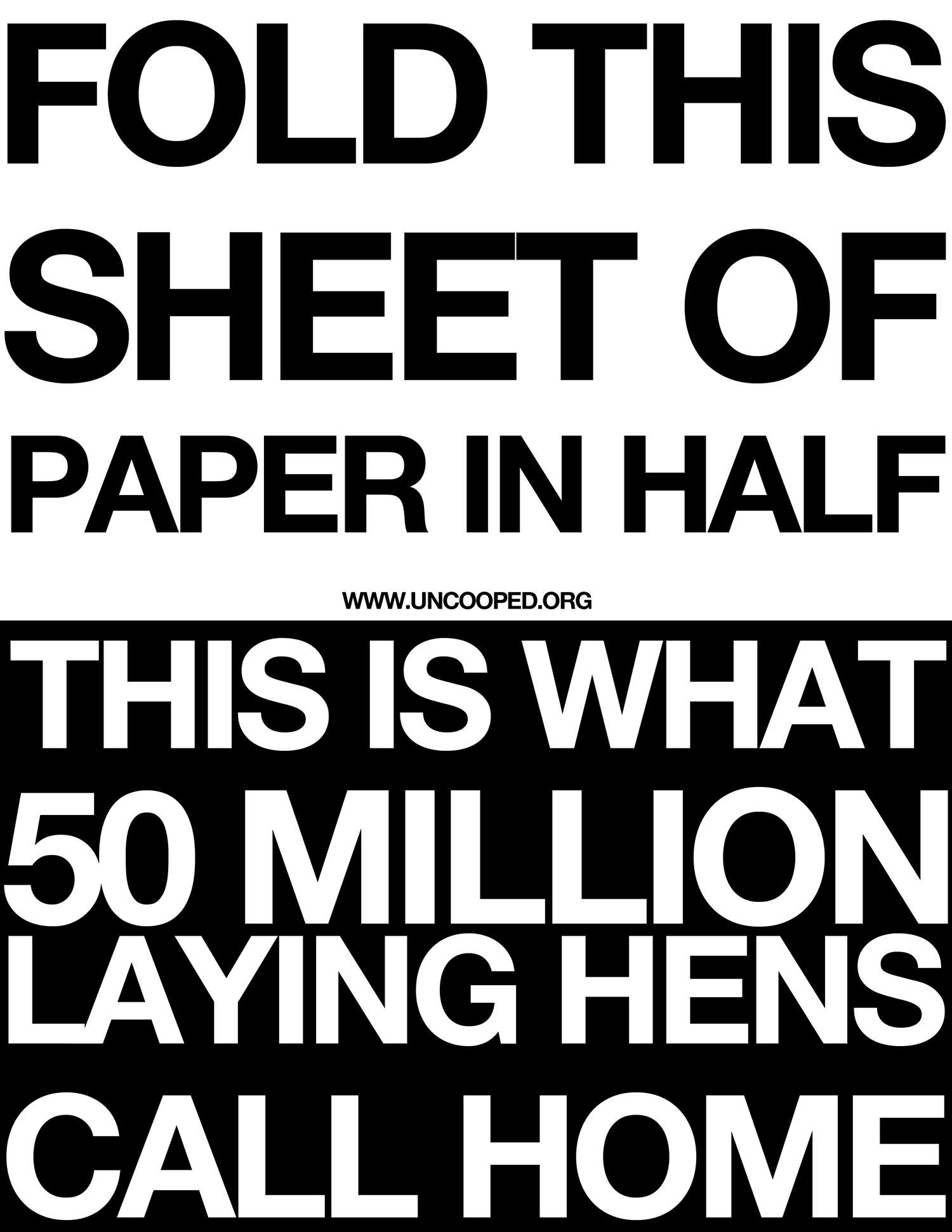 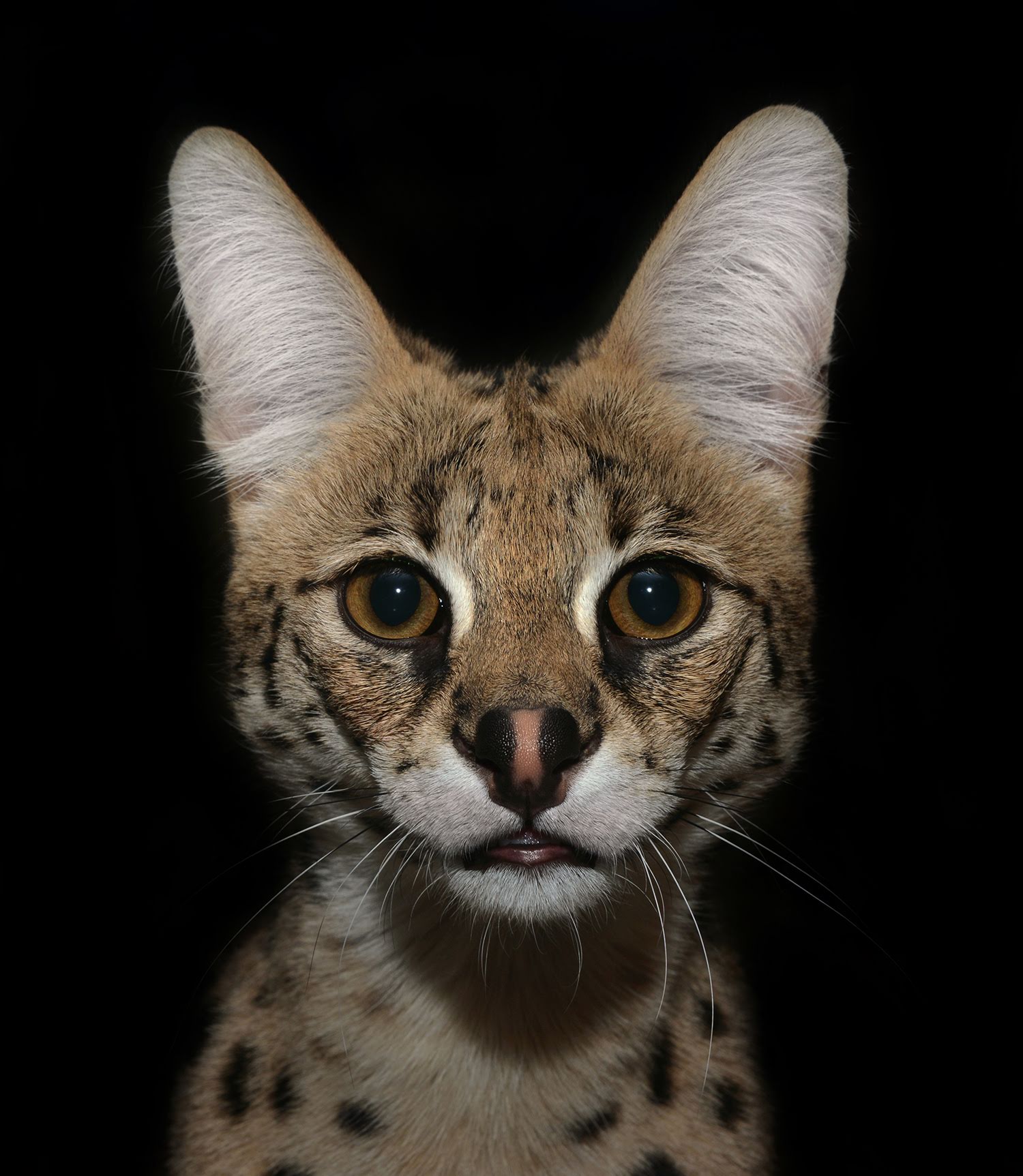 Serval. These elegant cats were once worshipped by the Egyptians for their grace and strength. Despite being barely twice the size of an average house cat, the serval is the most effective hunter of all the wildcats, with successful kills approximately half the time. (In contrast, lions have a hunting success rate of less than 20 percent.) © Traer Scott 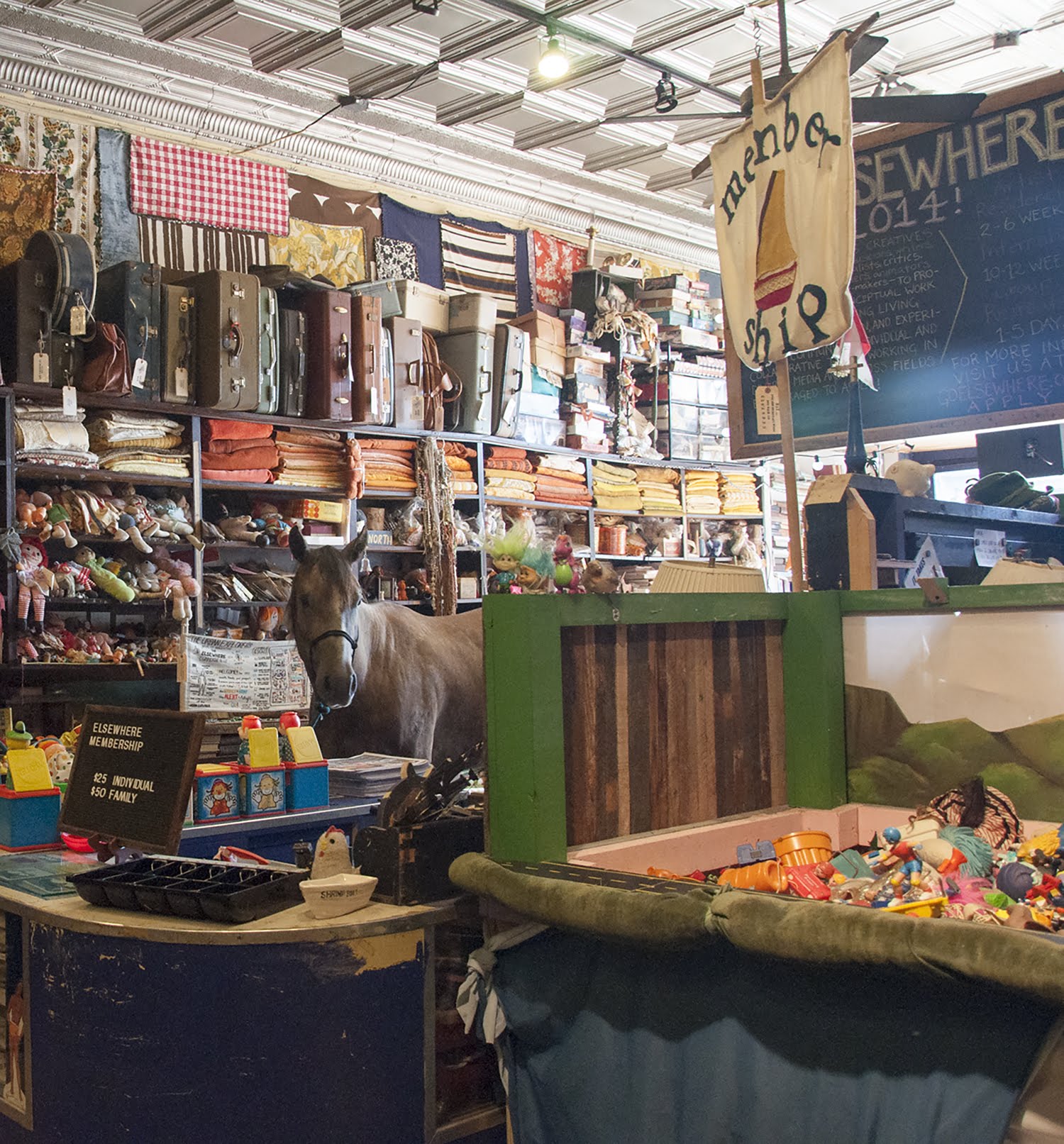 “Lee Deigaard’s video installation, ‘Gus and Deuce Go Elsewhere’, chronicles the journey of two young horses who are invited to a museum filled with human things. Without persuasion, but with curiosity and candor, the horses choose to spend hours exploring. As we watch Gus and Deuce, we can’t help but see their individuality, idiosyncrasies, and complexity as they examine human artifacts. They are free to roam and make any choice they want, and they choose to investigate quirky human objects. After viewing this work, we are left thinking about all the ways we undermine the complexity of thought and distinctive qualities that make our equine friends who they are.” 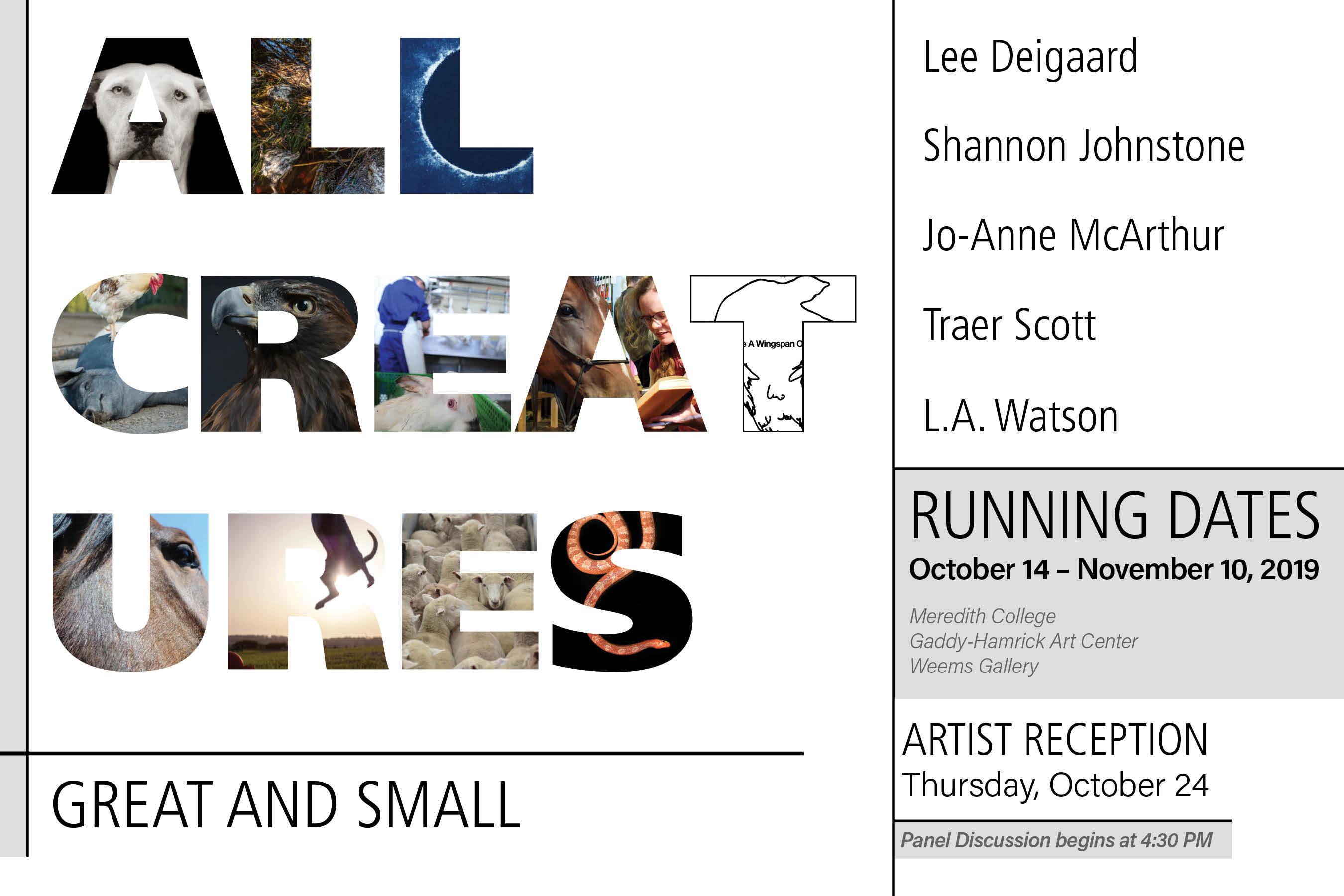