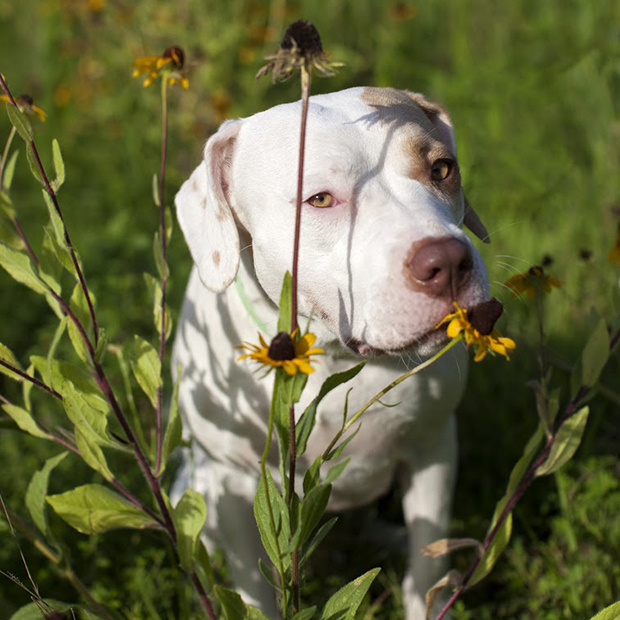 Lady Bell is an energetic and smart girl. She loves to give and receive affection (especially belly rubs). Lady Bell loves to play with toys. If you put out five toys, she will rotate through them and play with each of them as if she has never seen them before. She doesn’t like being cooped up in a kennel. Having another fun loving, active dog to play with is also important. She doesn’t like being an only dog. She is already spayed, microchipped, and up to date on her vaccinations. If you’d like to learn more about Lady Bell or want to meet her, please contact her foster mom at [email protected] 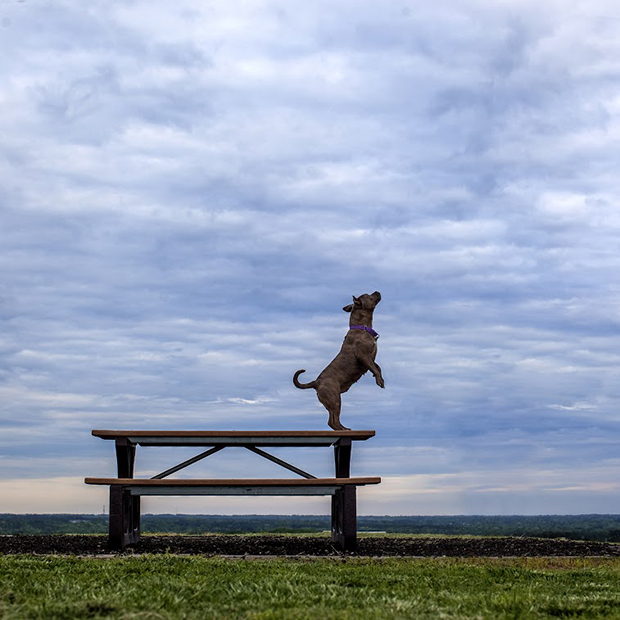 This soft-headed pup is Beeny. Beeny has been in the shelter without a break since February. We had a great time at Landfill Park, and I have come to the conclusion that she must have some French Bulldog in her. She has the French swagger down, and her chin and body shape are quite French. In any case, whatever she is made of, Beeny is all good. She is gentle, walks well on a leash, loves to run in short bursts, and really enjoys affection. Beeny is heartworm positive, but she has $250 in sponsorship. Beeny is available for adoption at the Wake County Animal Center. 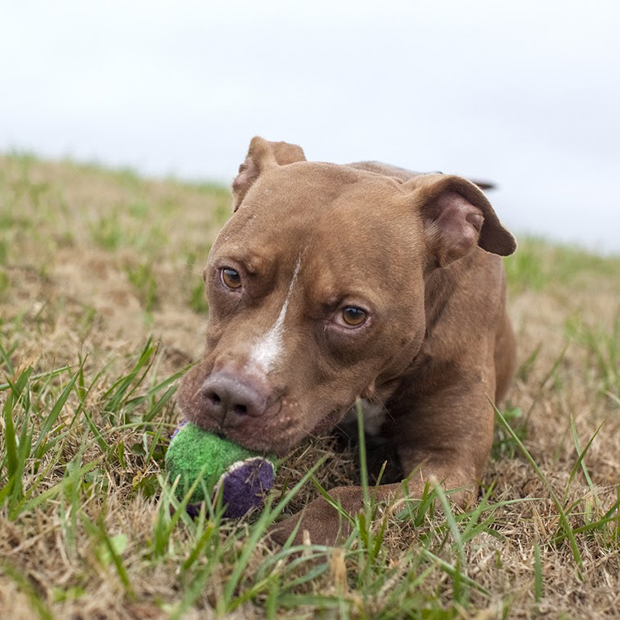 In 2014, North Carolina photographer Mary Shannon Johnstone met a dog named Bumpy Capone at the Wake County Animal Center in Raleigh. He was playful and loving— once, volunteers even found him hiding inside the toy box at doggie playgroup.

Still, no one wanted to adopt Bumpy. He was overlooked for several reasons. First, he’s a pit bull mix, and these types of dogs are misunderstood by the public. He was also heartworm positive.

The WCAC accepts every dog in need of shelter, and because they are state-funded, they have limited resources. If a dog is for whatever reason unable to find a home, he or she could be euthanized.

Johnstone devotes her weekends to photographing and giving voice to shelter animals like Bumpy, who are most at risk of being euthanized. Over the last few years, she has taken hundreds of shelter dogs to play at the nearby Landfill Park.

For dogs without homes, it’s quite the adventure. The park is a hilly, open area with green grass, lots of sunlight, and wonderful smells to explore. Landfill Park also the burial ground of an estimated 25,666 deceased dogs, all of whom were euthanized by the county between the years of 1996 to 2008 because they were not adopted.

When Johnstone photographed Bumpy Capone more than three years ago, she had no way of knowing what would happen to him. Over time, kennel life took a toll, and the once-happy grew depressed and anxious.

The shelter recognized that Bumpy needed to be taken into a foster home for his emotional wellbeing, and eventually, after exactly 242 days in the shelter system, he was adopted permanently by a loving couple.

Bumpy Capone’s family gave him a new life and a new name: Frodo.

“When I visited him in his new home, I was moved to tears,” Johnstone tells us, “Frodo was not just loved; he was adored. He had his own playroom, a big back yard where he loved to play frisbee and fetch, and two humans who doted on him. There was a brightness in his eyes that I had not seen before.”

People who work in shelters and rescues deal with more than their fair share of heartache, but Frodo’s story is something Johnstone returns to time and again. It gives her hope and motivates her to continue photographing the Landfill Dogs.

Here, you’ll find dogs who are currently in the same position Frodo was in many moons ago, and maybe, like Frodo’s family, you’ll see one you want to meet.

When Johnstone looks back on Frodo’s story, she can’t help but be reminded the main character in children’s book The Velveteen Rabbit— “the beloved, yet discarded, toy that was made real and lived on because of love.” 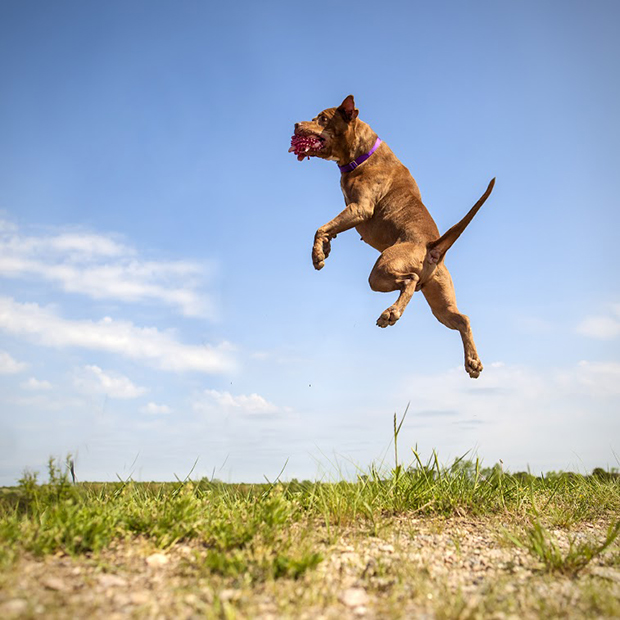 Haymitch is an all-around good dog. Haymitch walks well on a leash, knows “sit,” is gentle, loves to carry toys in his mouth, snorts like a pig, and seems to love water. As an added bonus, he plays really well in playgroup and he is quite popular with the lady dogs. Haymitch has been at the shelter without a break since January. He is frustrated in his kennel, so you when you come to meet him, please take him for a walk. He is a different dog. We couldn’t get over how mellow and happy he was during his photo shoot. It never ceases to amaze me all the good dogs we have in our community who have been passed over. The only reason I can think of why Haymitch has not found his people is because he is heartworm positive, but his treatment is now fully covered thanks to generous donors! This dog is very special, and I envy the human(s) that get to live with him. Haymitch is available for adoption through SPCA of Wake County in Raleigh, NC. 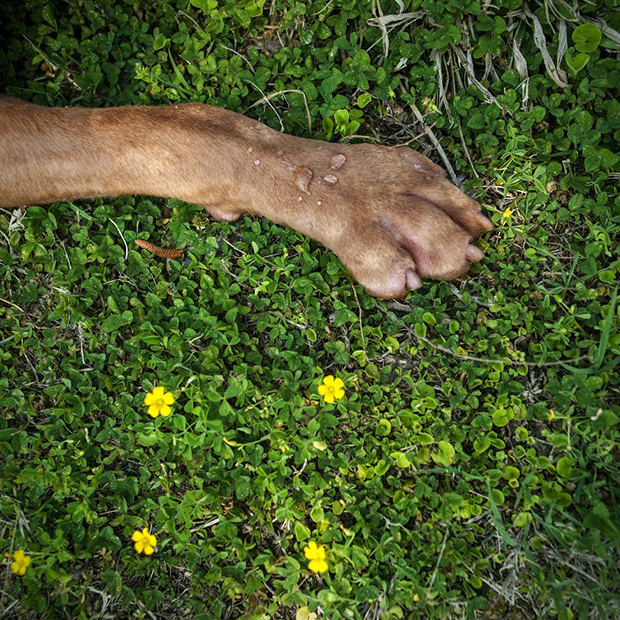 Haymitch, available for adoption through SPCA of Wake County in Raleigh, NC. 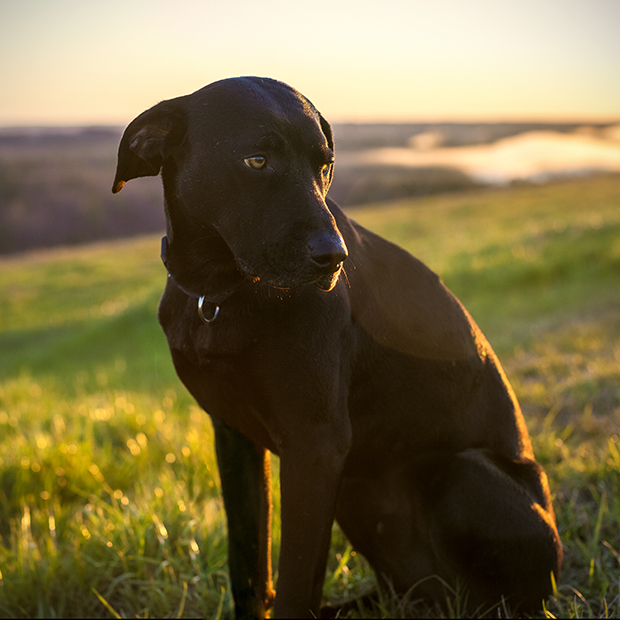 Morpheus was at Wake County Animal Center (WCAC), but was adopted back in January. However, within an hour of getting him home, Morpheus jumped the fence and had been on the run since January 30th. Although he wouldn’t let anyone catch him, he stayed in the neighborhood and came to greet dog walkers and runners. He won the hearts of an entire community in Durham; they fell in love with him, fed him, and tried to catch him. They even created a Facebook page for him for people to post their Morpheus sightings, Help find Morpheus. While on the run, Morpheus enjoyed running 6 or 7 miles with a local runner every morning. He would come out and run with her every morning, but always stayed just out of reach. WCAC volunteers partnered with Durham volunteers and rallied together to bring Morpheus to safety. At last, on Tuesday, “the Fugitive” was safely apprehended. Morpheus is currently in foster care and will be available for adoption through Rough Creek Ranch Rescue. 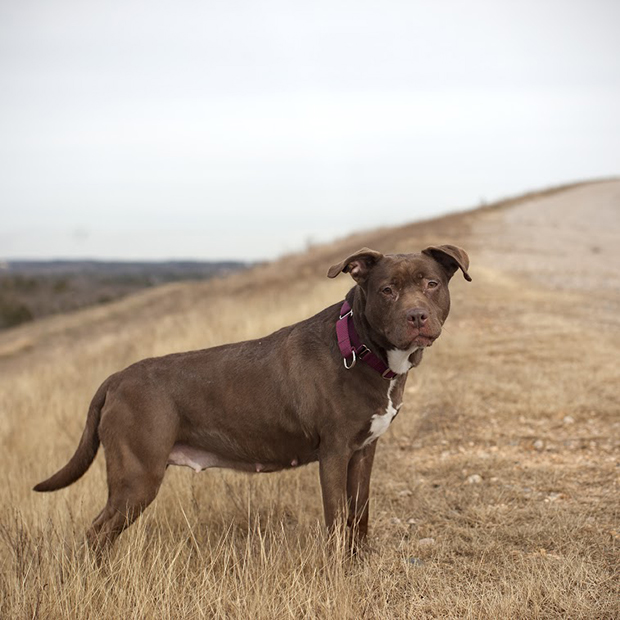 Nora is a quirky dog with a lot of love to give despite having a terrible start on life. In addition to being overbred, litter after litter, Nora spent the first three years of her life abused. She ended up at the shelter as a Protective Custody Animal Cruelty case. This means her former owner abused her, refused to give up his/her rights to her, and the matter had to be settled in court. She is an 8-year-old Staff/Lab mix, and is as goofy as can be. It is time for Nora to have a family to call her own. She deserves to enjoy the freedom to roam around her own home, the love of a family and to be able to snuggle together on a couch. For adoption inquiries, please contact her foster mom at [email protected] 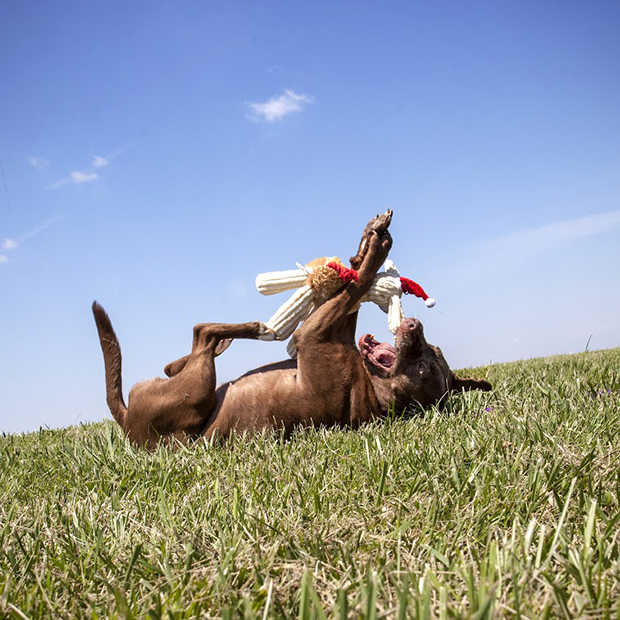 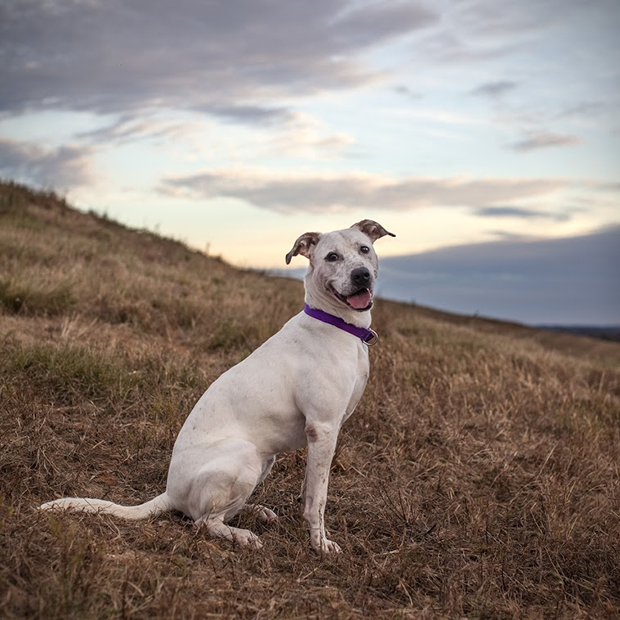 Bella is a Pointer mix who is almost 2 years old and has been with the Wake County Animal Center since she was 10 months old because her first family didn’t have enough time for her. That’s over half of her life as a shelter dog. She loves to do pretty much anything you’d want, like riding in a car, going on walks, playing, and running. She’d be a great dog for someone who likes to get up and go hiking or walking around the lake. Since She’s already spayed and UTD on shots, she’s ready to go home with you today. Please email her foster mom at [email protected] for more information. 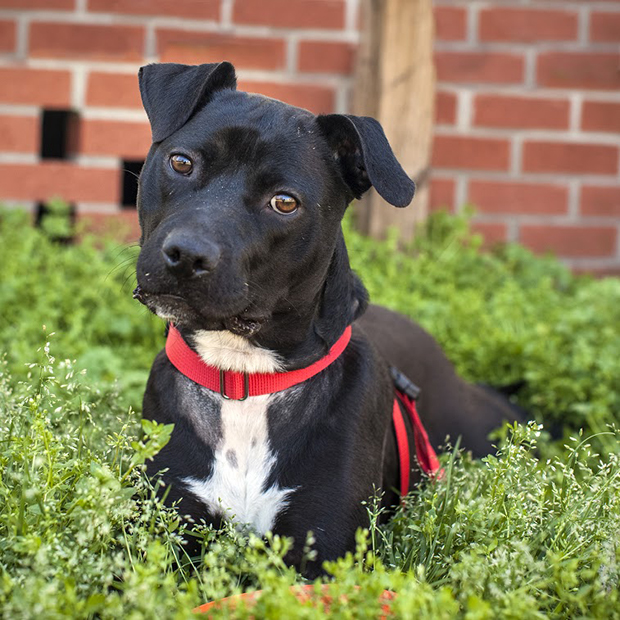 Angel came to the shelter as a cruelty case. She spent the first year of her life chained to a tree. Some had tied a bandana around her neck so tightly that it grew into her skin, causing a massive infection. In addition, the cloth cut off the circulation in her neck and caused her face to badly swell. It took months of TLC from a loving foster family, but Angel is now healthy and ready to find a home. Despite a rough start on life, Angel is a playful dog. She loves to play frisbee, chase, and she loves running and getting attention from humans. he scar around Angel’s neck is still evident, but that doesn’t slow her down one bit. She is a happy, happy, joyful dog, full of life. Angel is available for adoption through Lenoir County SPCA. 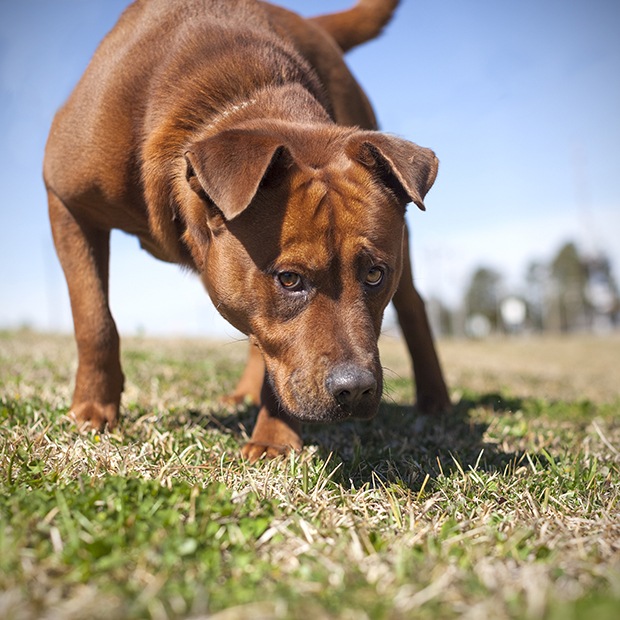 Tori arrived at the shelter after she was found chained to a tree when her owners moved and abandoned her. She is a volunteer favorite at the shelter: quiet, inquisitive, and gentle. In the words of volunteer Helen Civatte, “I have been spending lots of time with her, and she is as sweet as can be. She kind of reminds me of a bear cub.” Tori is soft, stocky, and gorgeous. Just look at that shiny red coat! Please come on out and meet her. You are sure to fall in love. Tori is available through the Lenoir County SPCA. 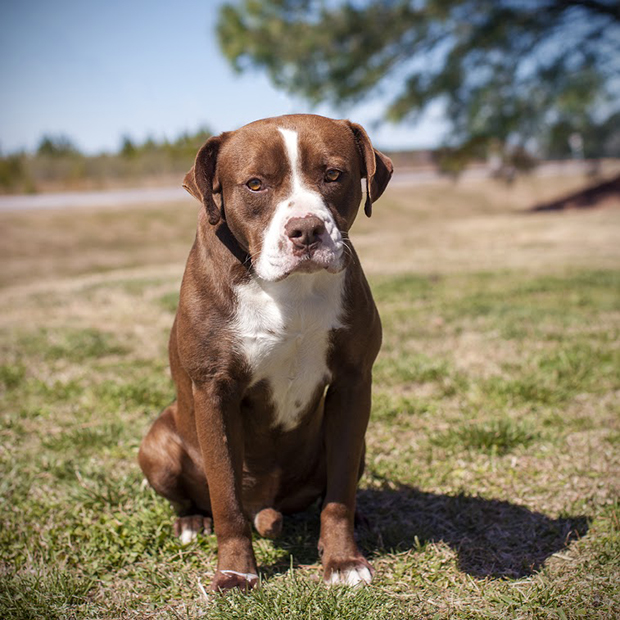 Ross is an introspective chunk and hunk of love. Ross has seriously beefy head and big soft heart. He has a girlfriend at the shelter named Harmony. The two love to play. Both are available for adoption through the Lenoir County SPCA. 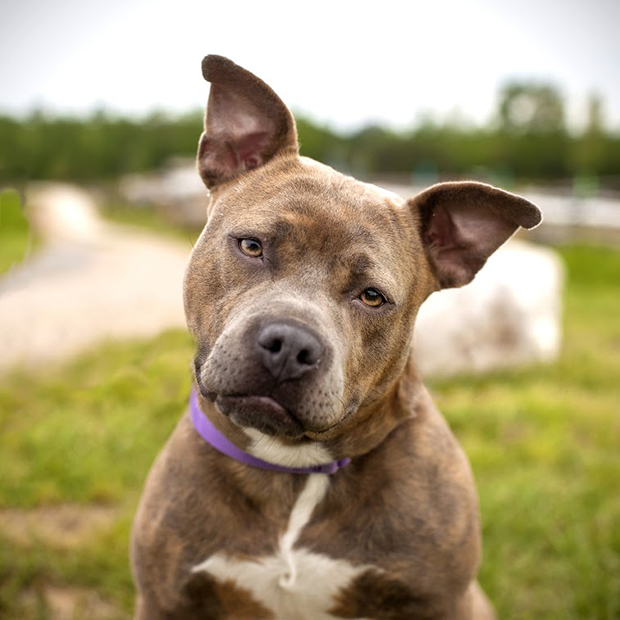 Beeny, available for adoption at the Wake County Animal Center. 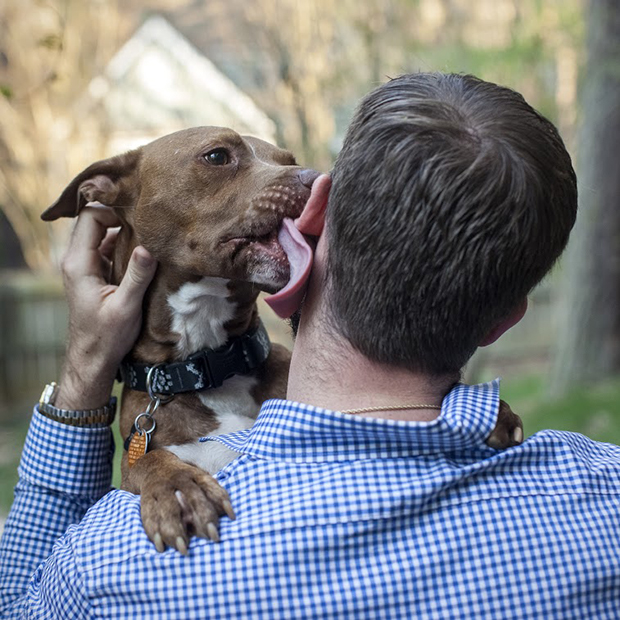 Bumpy Capone, aka Frodo, at his forever home.