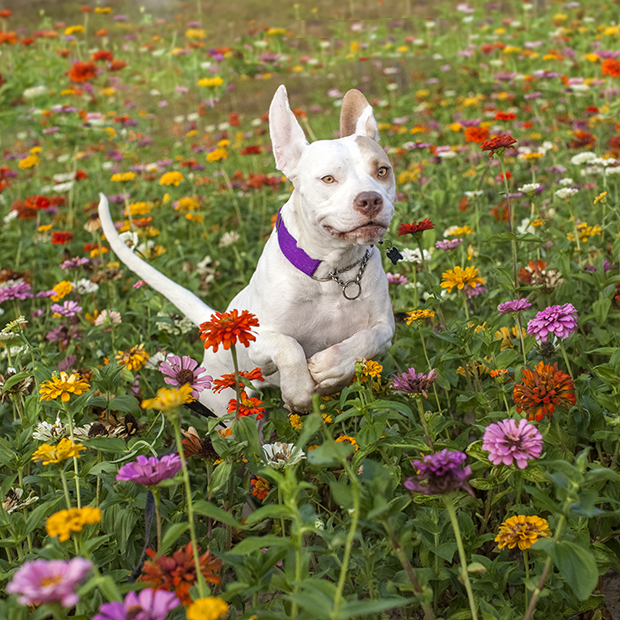 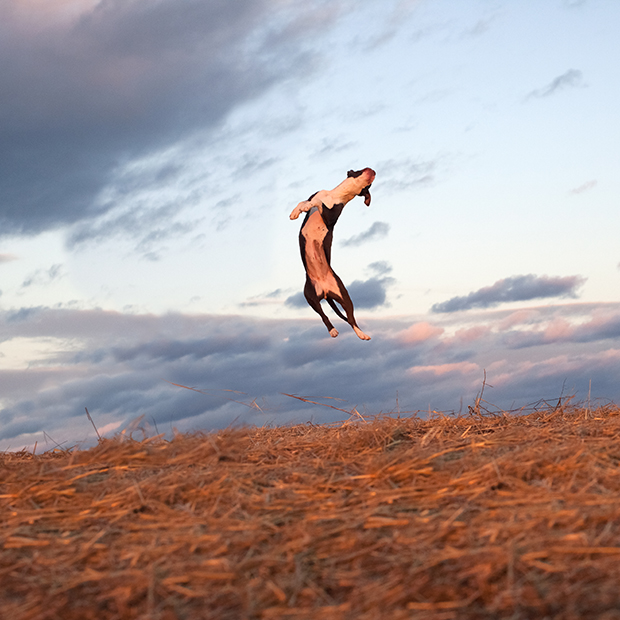 At the top of a hill, a dog named Marcy plays. When North Carolina-based photographer Shannon Johnstone gives Marcy’s favorite command—“Beg!”—the black and white dog immediately and happily abides. At seven years old, she’s still a bundle of energy and joy, trotting around with her tennis ball through the tall, open grass. This is Landfill Park, where in the winter months a shy brown dog named Chandler made the same journey to the top of the hill; instead of playing ball, he preferred to curl up while the photographer stroked his wrinkled brow and he looked up into her lens.

While a walk in the park might be a daily occurrence for many dogs, it’s a rare treat for dogs like Marcy and Chandler, who have both spent much of their days behind bars in a small cage at the Wake County Animal Center in Raleigh. They’re waiting for a home, and like so many others, their time is running out. Since WCAC is state-funded, they must take in every animal—every stray, every owner surrender, and every animal cruelty case. Since they do not turn away any dogs, they are overcrowded and their resources are drained, meaning that in order to make room for more dogs, overlooked dogs who have been in the kennel for a long period of time are euthanized.

Johnstone began photographing the dogs of WCAC years ago; she’s seen some of them adopted into forever homes or rescued by private shelters. She’s watched some of them die. It was four years ago that the county’s former director of environmental services reached out to the photographer to tell her about Landfill Park, where over the course of the twelve years between 1996 to 2008, 25,666 euthanized dogs had been buried alongside 4.8 million tons of waste. Since then, the landfill has been transformed into a park, with a hilltop that reaches nearly two hundred feet into the air. Birds soar above; deer scamper this way and that.

Because of Johnstone, this one-time burial site has become a safe space for the WCAC’s in-need homeless dogs. Each week, the photographer visits the center and asks to meet a dog whose life is most in jeopardy. She says hello, and the dogs are allowed to jump into the backseat of her car, staring out the window as she makes her way to the park. Once there, she spends a full hour with each dog, getting to know him or her through games of fetch. She teaches them new tricks, and sometimes, she just sits quietly by their side and pats their fur.

Living within a shelter environment, where there is very little space and constant noise, is extremely stressful for a dog. These animals are confused and afraid. The best place to get to know an adoptable dog, explain many of the adopters Johnstone interviews for Landfill Dogs, is outside of the kennel. In places like Landfill Park, away from the barking and under the light of the sun, a dog’s true personality shines through; a dog who spends much of his time cowering or anxiously spinning in circles within his kennel blossoms into a playful, joyful friend when allowed outside for a walk.

Throughout the course of her work in shelters, Johnstone has learned that rescue dogs are often the most gentle and loving companions. Breeding—both intentional and unintentional— is what leads to the astonishing quantity of homeless animals and caused the 2.7 million American euthanasias that took place over the last year. Every minute that passes, an estimated five dogs die in the United States for lack of a place to call home. When animals are not spayed and neutered, unexpected and unhoused litters escalate the problem, and purchasing dogs from breeders and pet stores, stresses Johnstone, is in large part what leads to so many homeless dogs.

Included in Johnstone’s Landfill Dogs are many happy endings, stories of dogs who despite the odds, found someone to love. With more strict legislation on breeding, in addition to increased awareness amongst the American public, the photographer hopes that there will one day be a solution. Until then, she takes it one dog at a time. Each dog gets his or her hour at the top of the landfill, amongst the wildflowers, completely to his or her self. She follows the dogs’ lead and does what they want to do, whether it’s laying down or romping about; for sixty minutes, each is free, and each is loved.

As for Marcy and Chandler, they’re still waiting, and both are in serious need of being noticed. Both have been in the shelter system and in foster care for more than a year, without anyone showing interest in taking them home forever. They’ve each had a tough, stressful time through no fault of their own, but each of them has a distinct, affectionate and gentle personality that emerges instantly when someone gives them a chance. To find your own Landfill Dog, says Johnstone, you can simply walk into a local shelter and ask to see the dog who’s been there the longest.

When Johnstone first started working closely with an anonymous shelter (not WCAC) for her series Breeding Ignorance, she was told that during euthanasias, which when performed humanely are done through lethal injection, she could not cry. If she felt the tears coming during the process, she would need to step outside and take a moment for herself. In some ways, the Landfill Dogs give us that moment, and they share it with us. Here, we’re allowed to mourn freely the deaths each and every dog lost, and in turn– perhaps most of all– to celebrate the beauty of life with those who remain. 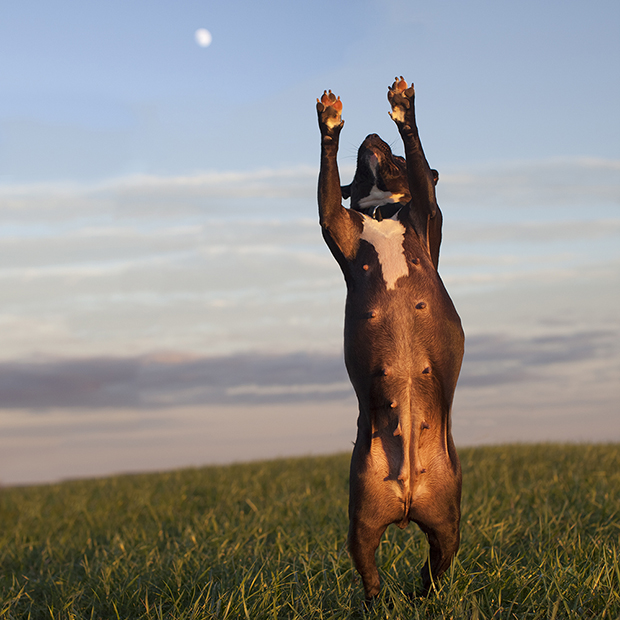 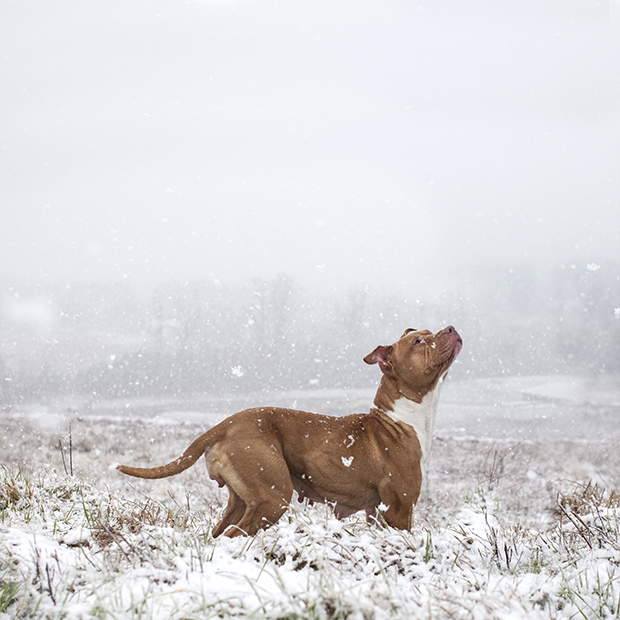 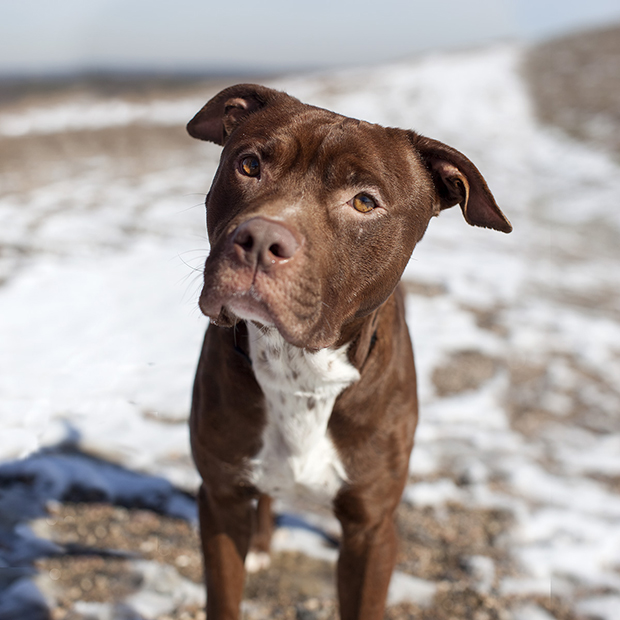 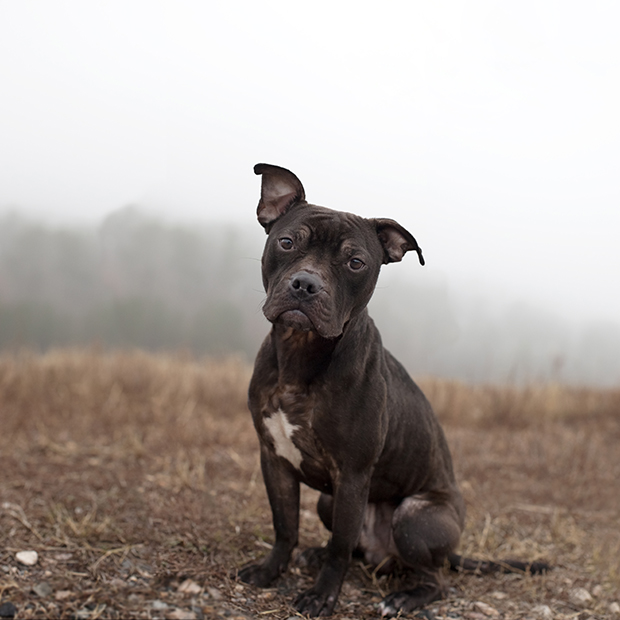 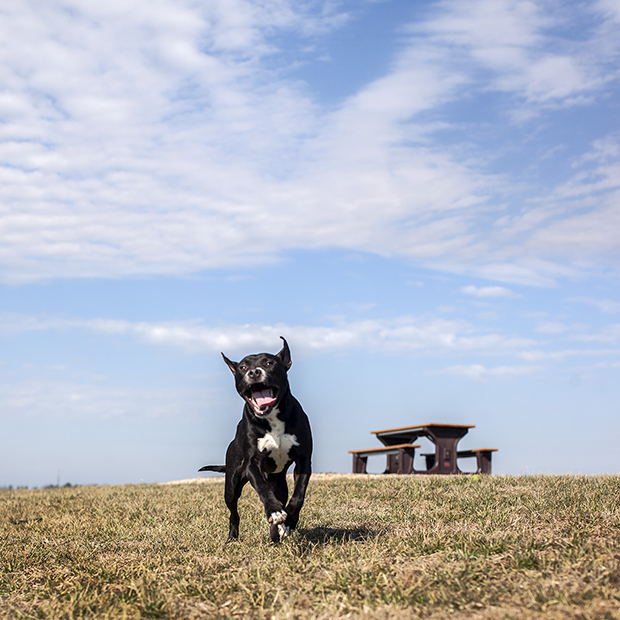 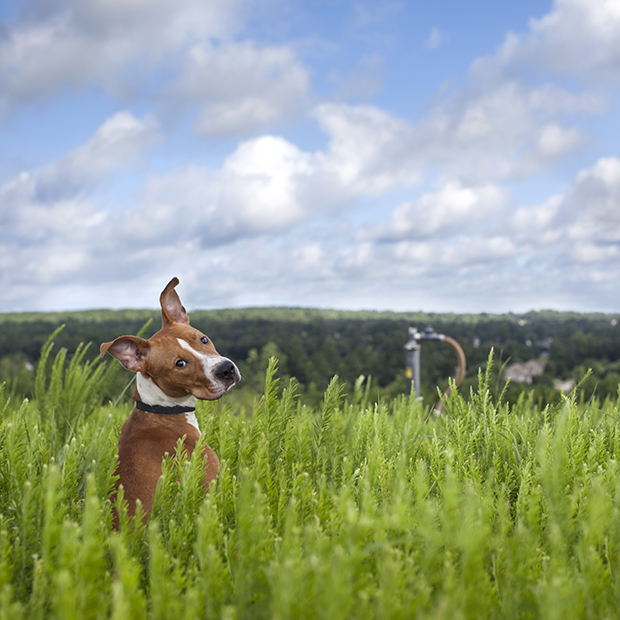 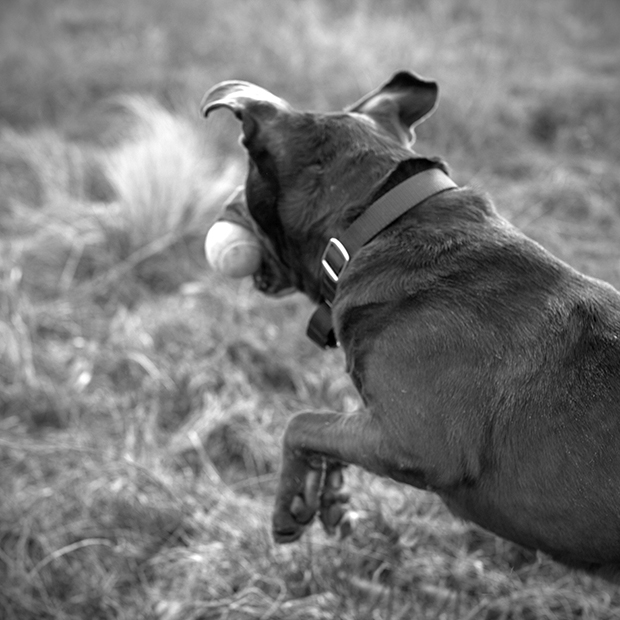 Nora, rescued and waiting for adoption at Friends FUR Life 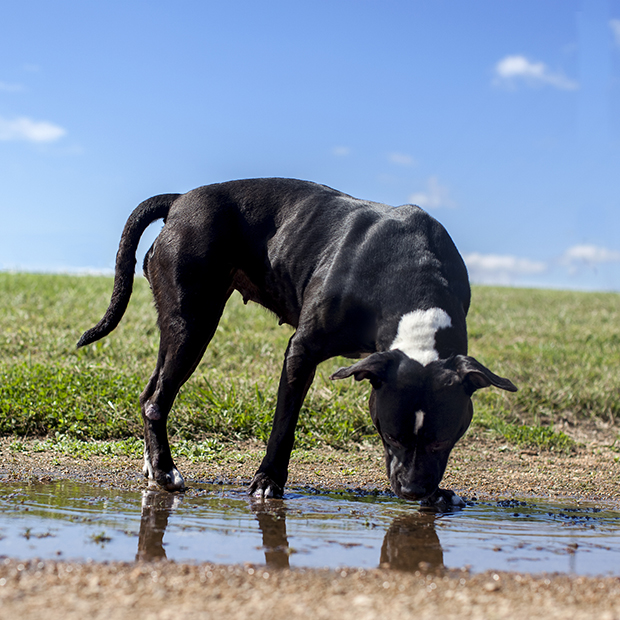 Daisy the Duchess, rescued and waiting for adoption with Shavonte Flemming, who can be reached via Wake County Animal Center 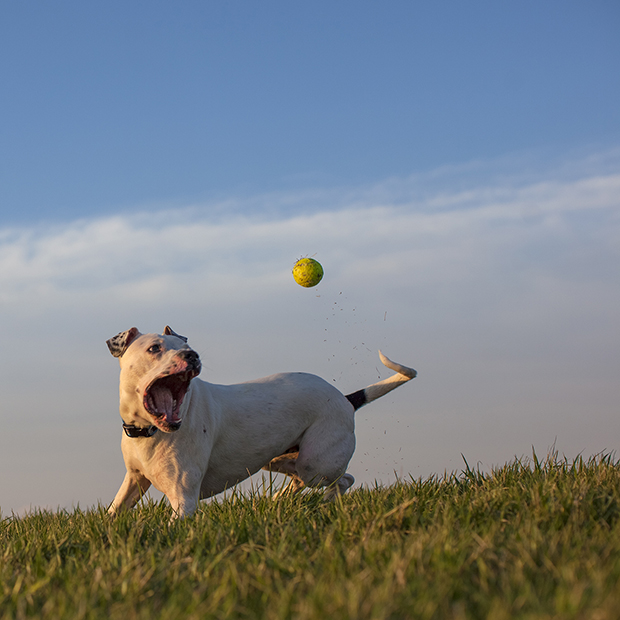 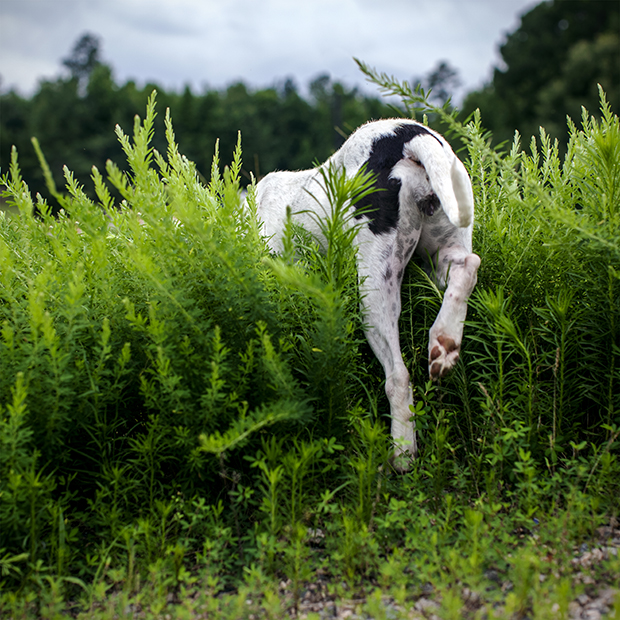 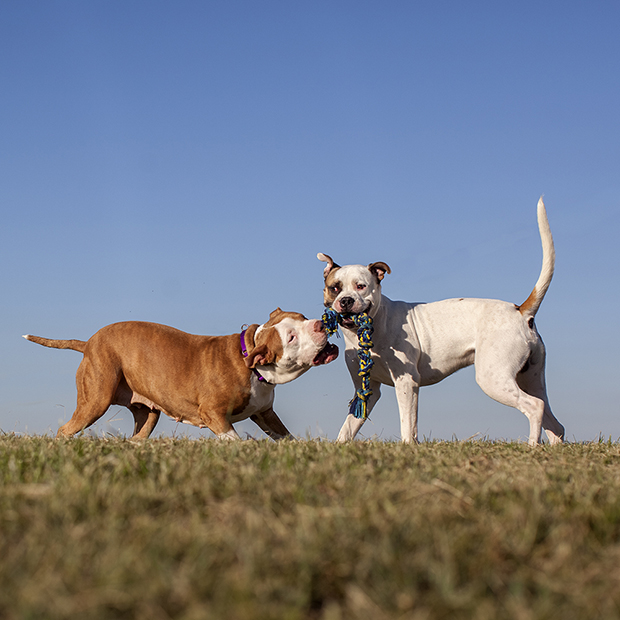 Marlon Tuscon and Ruby, rescued and waiting for adoption at South of the Bully and Second Chance Pet Adoptions, respectively 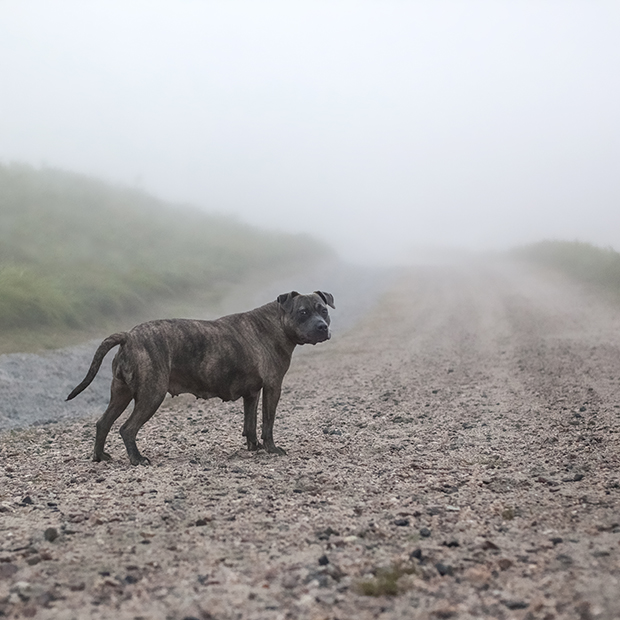 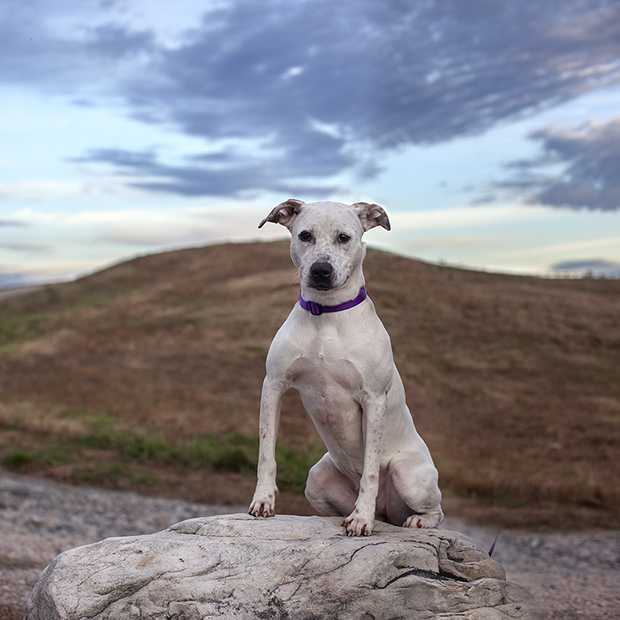 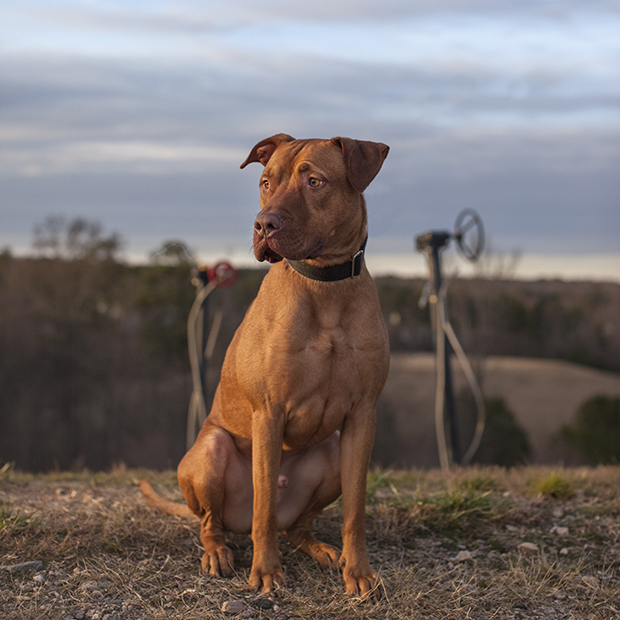 Kuvo, rescued and waiting for adoption at South of the Bully and Second Chance Pet Adoptions 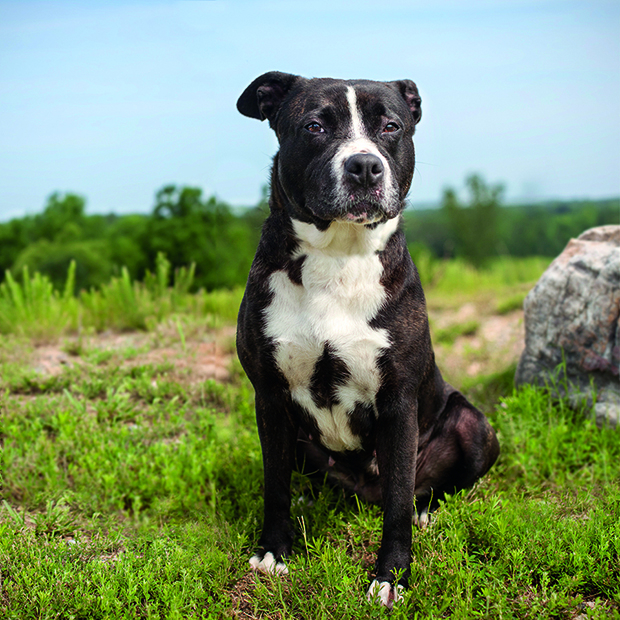 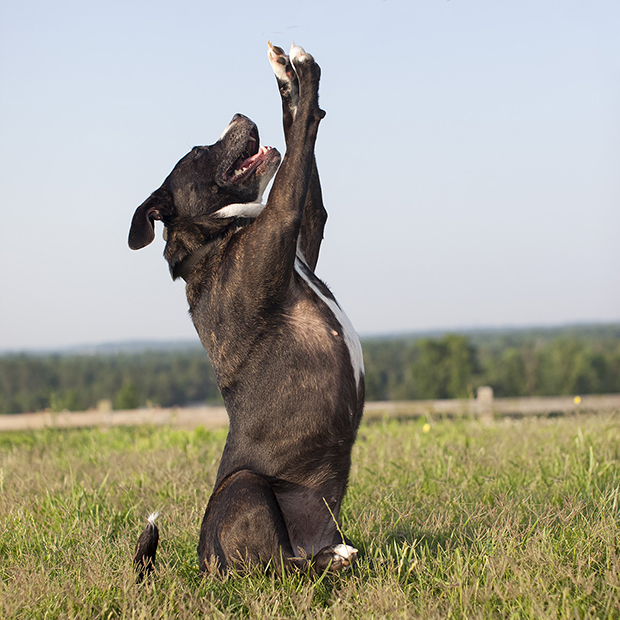