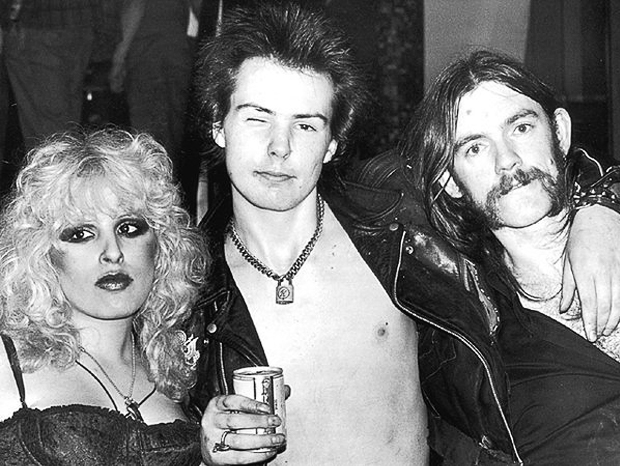 If you like music, it’s very likely that you’ve seen the work of Kerstin Rodgers, one of the prime documentarians of the punk scene in London and one of the most influential rock’n’roll photographers of all time.

That classic image of a young and coy Morrisey wearing an oversized knit sweater, those scenes of The Cramps ferociously blasting on stage as if their lives depended on it, or Madness doing their trademark “nutty train” … that’s all Kerstin. She’s one of the many unsung lens warriors who one beer-stained night at a time, helped define the iconography of rock in the late 70s and early 80s.

She got her first photos published in New Musical Express as a teenager, and since then her work has been printed on the pages of almost every prestigious musical and news outlet under the sun. She’s exhibited in galleries in Paris and London, and was included in the Getty Image Library exhibition, ‘Beat Positive’.

But Rodgers’ story is as weird, fascinating and unique as they come. Although her impact in the music industry is immense, over the last decade she has become an Internet celebrity for very different reasons.

In the new millennium, Kerstin became “MsMarmitelover”, one of the biggest influencers in the food and drink world.

Yes, she also happens to be a professional cook who shook up the food industry with the introduction of the underground restaurant movement into the UK in 2009. She’s been one of the very first to adopt the Airbnb model into the scene, hosting a series of thematic ‘supper clubs’ at her home that kickstarted a trend that still goes on today.

Over the years she has also organized anarchist cafés, indie music festivals and other happenings all revolving around gastronomy.

As MsMarmitelover, she’s published a handful of cooking and recipe books, has written guest posts for The Guardian, and has been featured heavily in the British press for her foodie exploits.

We had the pleasure of talking to Kerstin about her career in photography, the Madness hit song dedicated to her, and her gastronomical entrepreneurship. Kerstin is launching a brand new site showcasing her career as a photographer, so we recommed you check out her work at Kerstinrodgers.co.uk

Let’s hop on a Delorean and go back to the late 70s. Can you tell us how you got involved in photography in the first place, and in rock’n’roll photography in particular?
“I’ve been a photographer since I was 9 years old. My parents bought me an Instamatic camera and I was obsessed with shooting pictures. At school assembly, I used to look at the girls on stage and imagine how I would style and shoot them.

“As a teenager, I loved music; I went to a gig virtually every night. Every pub had a live band and it was very cheap to get in.

“Back then, rock n rock was the rock n roll. For the last decade, food has been the new ‘rock n roll’. My daughter goes to more restaurants, pop-ups and street stalls than gigs.

“Live music is so expensive now, but when I was young, you literally never ate out except on holiday.

“I had a boyfriend who was a rockabilly with a stiff hair sprayed quiff. I lost my virginity to him in the back of my mums Honda. He was so cool, but I wasn’t allowed to touch his hair under any circumstances. One night, I complained he was often late to pick me up. He replied: ‘Of course I love you. I got you chips didn’t I?'”

What gear do you usually use? What is your technical approach in those unpredictable, low light conditions?
“In the analogue days, I used Nikons, FM, FE, on manual. I used a Hasselblad and a light meter and Elinchrom flash. Then I became a single mother and couldn’t afford to shoot anymore.

“Digital changed all that.

“Now I use Canons – I have a Canon 6D – and I use my iPhone. I’m on the iPhone upgrade programme, so I upgrade every year. I love Instagram, but I prefer the Stories which you can use like a notebook.

“In low light conditions, I hold my breath! I can shoot fairly steadily at 1/30th of a second. I prefer not to use flash but I will on occasion. Or up the ASA. Obviously, with digital, it’s all different now.”

You photographed most of the greatest bands of the Punk and New Wave movements. Was there any act that you would’ve liked to photograph but never got the chance?
“In terms of punk stars, I’d have liked to have shot the Sex Pistols, The Clash, The Damned and The Jam. I shot Sid Vicious. In fact, my first front page was a pic of Sid and Nancy – with Lemmy, but they cropped him out – taken a month before Sid killed Nancy.

“But actually, I’d like to have shot Judy Garland, preferably from the pit at Carnegie Hall.”

How did you approach these rock stars in order to photograph them? What did you do to bring out of them such iconic moments?
“The Sid picture, I just went up to him and asked if I could take a picture. You have to be pushy in certain kinds of photography. I asked Joan Jett on the same night but she was a right cow and refused. So much for feminist solidarity!

“Otherwise, I was commissioned by the NME and record companies to shoot groups in the studio.”

Can you share with us the story behind ‘My Girl’, the Madness song about you?
“I was going out with Mike Barson, the songwriter, arranger and pianist of the group. On our first date, he said: ‘I’m going to be a pop star’. I believed him.

“I also shot all the pictures of Madness for the first three years, helping to create their image. Karl, Chas Smash, the dancer, were all brilliant to photograph, so I suggested that they all did dancing like Karl. The ‘nutty train’ came about because I was shooting them in such a small studio, I had to fit them in somehow. There were seven of them.

“Of course, the minute Madness got their first record deal and got famous, they dropped me and employed a posh photographer who basically imitated what I’d done, but in a ‘cleaner’ and more polished way.

“Even though I was with Mike, this happened because of nasty inter-band politics. Can’t use his girlfriend-type thing even though I’d spent years shooting them for free, developing and printing late into the night. Since then, they keep using my photographs without crediting or paying me. It’s very hurtful.

“They get royalties every time one of their songs are played, so why are they so selfish with me? As a photographer, your back catalogue is your pension. I really should take legal action against them but it’s so hard to do that against a band you thought were friends.”

Is there any band today that excites you as much as the seminal acts of the late 70s and early 80s?
“I loved The Prodigy and was very sad when Keith Flint died. I’d have liked to have shot him. I like Daft Punk’s music. I loved Amy Winehouse and shot her at Glasto.

“Right now, music has lost its way. It’s all so manufactured and synthetic sounding but not in a good way. White music, in particular, is lost. Black music keeps innovating.

“I’m getting into a bit of country. I love Jimmy Webb’s songs.”

Over the last two decades, you’ve turned into an online personality because of your cooking entrepreneurship. Are you as active in the rock’n’roll circuit as before?
“No, I’m not as active as before in terms of the music scene. Women tend not to be because we spend our money on children and the house and we have less disposable income than men. I see husbands of friends with massive music collections while the wife has no money to spend on herself. Germaine Greer talks about this.

Yes, I am a radical feminist. Not a lesbian though, I fancy men.

“Obviously, things are different now, it’s all streaming. Which is why live concerts are so expensive.

“But I remain curious and interested and open to anything.”

In a blog article titled ‘Never boil the bollocks’, you talk about how punk was a reaction to the overblown beast that mainstream rock of the era had become, and you draw parallels with your underground dining movement, which was itself a reaction to the excesses of the restaurant industry circa 2008. How’s the restaurant scene today? What’s the post-punk phase of supper clubs?
“I’m thinking that food has jumped the shark in the same way that music did. With supper clubs, which was a grassroots movement, unfortunately, the usual suspects have taken over and grabbed the limelight.

“You know them, the ones with connections and money for PRs, the young and the pretty, the women that don’t look like they eat. I don’t believe it’s a supper club if it’s in a restaurant. Sorry, not sorry.

“It was in part a movement to promote female chefs and cooks who couldn’t work in a normal restaurant due to family responsibilities. It was good for retired chefs who didn’t want to spend 16 hour days in restaurants but still loved cooking for an audience.

“Dinner parties are one thing but cooking for money adds a special kind of pressure – it keeps you on your toes.

“I still run supper clubs in my home (as well as doing pop-ups elsewhere). I still keep the flame burning. The future of supper clubs? It’s great for tourism, an opportunity for travelers to experience eating in someone’s home and meeting locals.”

What’s the most punkish recipe you got?
“Punk was never very foodie, unlike the hippy movement, who loved cooking and food. Hippies invented the veggie burger, for instance.

“Punk was about alcohol and drugs and not being healthy.

“However, animal rights is a punk issue. I wrote V is for Vegan, which is very punk influenced in design. The cover looks like Never mind the Bollocks. It was the first full-color glossy vegan cookbook in the UK.

“Style wise, perhaps my mosaic of beetroot and radish with horseradish dressing from V is for Vegan.

I went viral in China for a while with my stargazy pie and chocolate aubergines – which was featured in the New York Times recently.

Any future books on the horizon?
“I’d like to do a second Supper Club book. I’ve been concentrating on food and travel. Travel is where I get my inspiration for recipes, so I’d like to do some books on that. Vegetarian travel books. I’m very geeky about food. I like to explore how it was grown, how it’s made, everything.

“For my most recent book, the British Organic Carrot Cookbook, I traveled around the UK, meeting and photographing organic farmers, then created 35 recipes, shot and styled them. I’m more interested in farmers than chefs. They are the backbone of our food industry.”