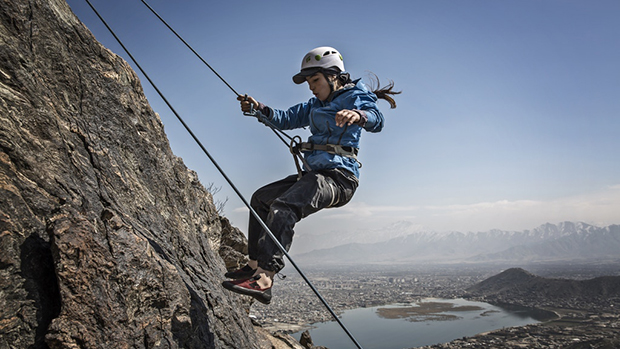 At 7,500 meters, Mount Noshaq is Afghanistan’s highest point, and this year, five Afghan women will climb it. At the same time, they will challenge the rules and restrictions they’ve faced in their lives thus far. Going against the grain of a culture that prohibits girls and women from participating in outdoor sports, this group will redefine what it means to be a young woman coming of age in a male-dominated world. The photojournalist Erin Trieb and the journalist Theresa Breuer will be right there with them, and together, they will share the journey with the world in their film An Uphill Battle, currently on Kickstarter.

The women in the film are part of Ascend Athletics, an organization working to empower women in their teens and twenties through mountain climbing. With six days of rigorous training per week, in addition to community service, trauma resiliency sessions, and other team activities, these women learn the skills needed to embark on expeditions in the famous Hindu Kush mountain range. These trips are ambitious physically, logistically, and mentally. Ascend first planned an expedition to Mount Noshaq in 2015, but conflict in the area forced them to re-route to Panjshir for the protection of the women. That means that members of this current group will be the first-ever Afghan women to summit the mountain, the second highest in the Hindu Kush range.

Climbing Mount Noshaq is a challenge in and of itself, but this feat will also serve as a beacon for a rising generation of women, in Afghanistan and around the world. By breaking the status quo, these mountaineers will redirect the courses of their individual lives, but they will also claim their rightful places in sports, in society, and in history. We spoke with Trieb and Breuer about the project. Head on over to Kickstarter to support An Uphill Battle. 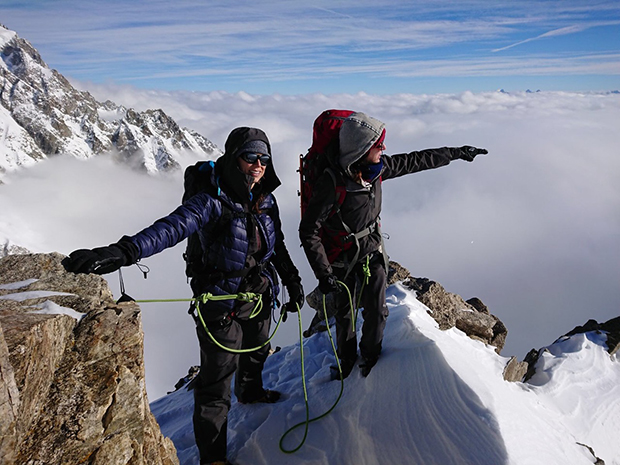 What first struck you about these mountaineers?
“We initially heard about the organization, Ascend, in 2016. We were intrigued by the bravery of the young women on the moutaineering team. Having worked in Afghanistan for many years, we were aware that Afghan society considers it shameful for women to exercise, especially outdoors, and knew that these women were taking huge risks by challenging societal and gender norms in their country. When they told us that they wanted to climb the highest peak in Afghanistan–which has never been climbed by an Afghan woman before–we knew we needed to tell their story.”

Why do you think they trusted you to tell their story?
“We have been following the team for almost two years now, which prompted us to live in Kabul in order to document them more closely and intimately. It is important to us that we spend quality time with the team as well to earn their trust. This ranges from watching movies together, training together, or celebrating someone’s birthday. We also share stories and talk about the hardships we have faced in our own personal lives. Over time, this has created a bond and trust between them and us.”

What challenges do these women face in their daily lives?
“Women in Afghanistan are expected to follow orders and to not question societal rules laid out for them. So while a lot of the mountaineering team members do go to school, they are expected to marry soon after their education, have children, and become housewives. There is little to no autonomy for a woman to choose her own path. Apart from that, they live in a country with a long history of war and that is presently still at war. They face terrorist attacks weekly; they never know when they might be the next to be targeted, injured or killed. One team member recently lost three friends in a suicide bombing. This is the brutal reality that everyone in Afghanistan faces, not only women.

“Additionally, the country’s instability inhibits the mountain climbers‘ ability to move freely–another team member recently argued with her father because he didn’t want her to go to university because he was afraid she might die in a suicide attack on her way to school. The repercussions are that the family would then be shamed by outside family members, since the woman was outside and not at home ‘where she belongs.’”

Will these women face any consequences for taking a stand in this way?
“Simply going outdoors to rock climb or hike in the mountains is a huge risk for these women–not so much from terrorist organizations, but more so from their own families. A lot of them come from backgrounds of abuse, forced marriages, and a lack of education. Many of their family members consider physical exercise for women to be shameful. One young woman told us how her uncle strangled her because he deemed her too rebellious. But while the backlash is significant, they continue fighting for their right to their own personal choices, for personal freedom, and to be outdoors.”

What is the most memorable story you’ve heard from one of these women?
“Almost every story we hear from these women is memorable. Most surprising, though, is how often we hear that women in Afghanistan are never asked about their dreams, their hopes, and what they envision for their future. They are taught to follow orders, and most have never had the chance to develop a sense of self or an ego. This became apparent to us during an expedition about two years ago. Three days into the hike, one of the team members admitted that for the first time in her life she realized that she had her own thoughts. She was 23 years old at the time. On the contrary, we grew up in societies that constantly challenged us to think for ourselves, so the idea of never having had ‘our own thoughts’ seems unfathomable to us.

““What impacts us the most is witnessing these women change and grow through the act of mountain climbing and their development of self-esteem. They have opened up to us, speaking to us about the overwhelming challenges they face, which is what keeps us passionate and committed to this project.”

Can you tell us a bit about Mount Noshaq itself?
“The mountain was climbed by a handful of mountaineers before Afghanistan’s war with Russia. During the war, however, the mountain became closed off because its base was littered with landmines. Mount Noshaq opened back up for climbing in 2009, but it is still one of the more obscure climbing destinations in the Hindu Kush mountain range. There are only a few, if any, expeditions each year. It is remote, but Afghanistan also lacks the infrastructure [of places] like Pakistan or Nepal, which cater to high altitude climbers.”

What do you expect from the expedition? Will you face obstacles yourselves?
“When it comes to the physical obstacles, we will be facing the same struggles as the Afghan mountaineers on the mountain. We have been preparing for over a year for the expedition with physical exercise and training in the mountains, which includes five days a week of running, hiking with weighted packs, and weightlifting. Nothing can prepare you for high altitude, and everyone’s bodies react differently. Altitude sickness can be deadly if not recognized or treated immediately. So our plan is to move slowly and be as careful as possible. The hardest part of this project has been training, physically, while also making a film at the same time. It’s been an incredible challenge to give equal attention to both.”

What have you learned from these women?
“We greatly admire their resilience and their sheer will to constantly fight for what they believe in. They are well aware that they are challenging a male-dominated, misogynistic society. It takes gumption and a total commitment on their part, which inspires us, too, to keep going and pushing boundaries.”

Why is it important to tell this story now, at this point in history?
“At this time in history, women all over the world are standing up for their rights and are demanding for their voices to be heard—from women in Saudi Arabia practicing their right to drive to American women speaking out about sexual harassment. The women mountaineers we are documenting are part of a history-making movement.”

“The outdoor industry, especially, is still dominated by white, western men. The female mountaineering team in Afghanistan is showing a different face and culture to the sport of mountain climbing and alpinism. And within their own society, they are torch-bearers: setting an example and showing the world that they are no longer victims behind a veil.”