The Patchwork of Hope and Fear in Afghanistan 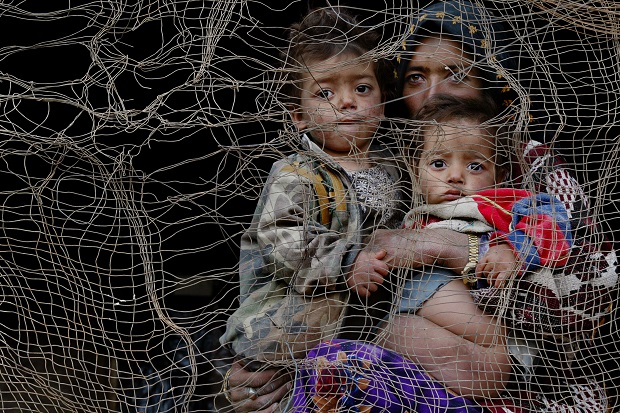 A mother and her two children look out from their cave dwelling. Many families fleeing the Taliban took refuge inside caves adjacent to Bamiyan’s destroyed ancient Buddha statues and now have nowhere else to live. Bamiyan, November 19, 2003. (Photo courtesy of Getty Images.) 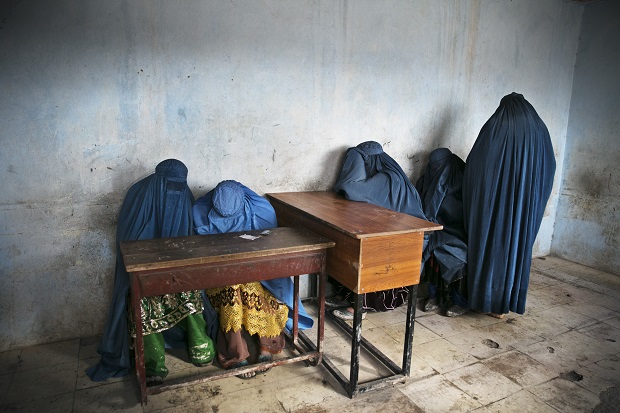 Burqa-clad women wait to vote after a polling station runs out of ballots. Kabul, April 5, 2014.

When she first arrived in Afghanistan in the fall of 2001, American photojournalist Paula Bronstein was instantly taken aback by the country, its rugged landscape and the indomitable spirit of its people. Starting out as a reporter for news wire, the stories she was following gradually became a personal pursuit, an effort to catalogue the daily lives existing beyond the frontlines of an ongoing and brutal war. Bronstein’s new book entitled Afghanistan: Between Hope and Fear (University of Texas Press, August 2016), compiles over a hundred colour images taken between 2001-2015, giving us a rich and multi-layered insight into a world so disparate from our own.

The book’s title reflects the uncertain state of life in Afghanistan, where hope and fear both co-exist with an odd closeness. “In this country sadness is a way of life,” explains Bronstein, “though sometimes, so too is happiness.” It’s these two shifting forces that we see flicking through the book’s pages – the glimmer of a smile written on a girl’s face as she watches pigeons fly across blue skies at sundown; the naked wounds of a rocket attack victim. It is this patchwork of hope and horror that reflects reality for many Afghans today. 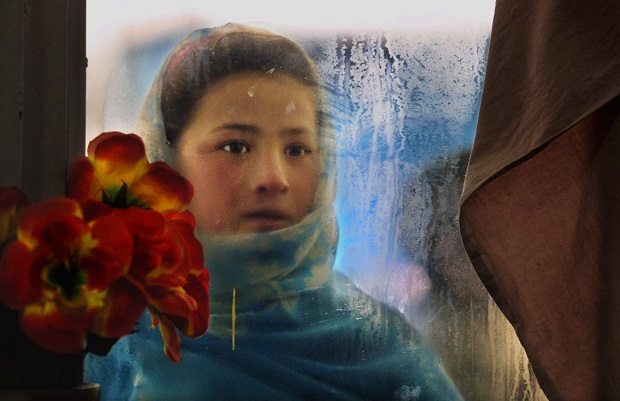 A girl looks through the frosted window of a restaurant, hoping to get leftovers. She begs after school to help out her family. Kabul, January 13, 2002. (Photo courtesy of Getty Images.) 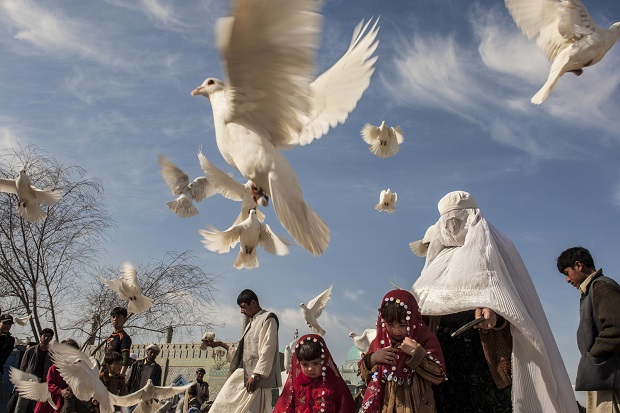 A woman in a white burqa enjoys an afternoon with her family feeding the white pigeons at the Blue Mosque. Mazar-e-Sharif, March 8, 2008. (Photo courtesy of Getty Images.) 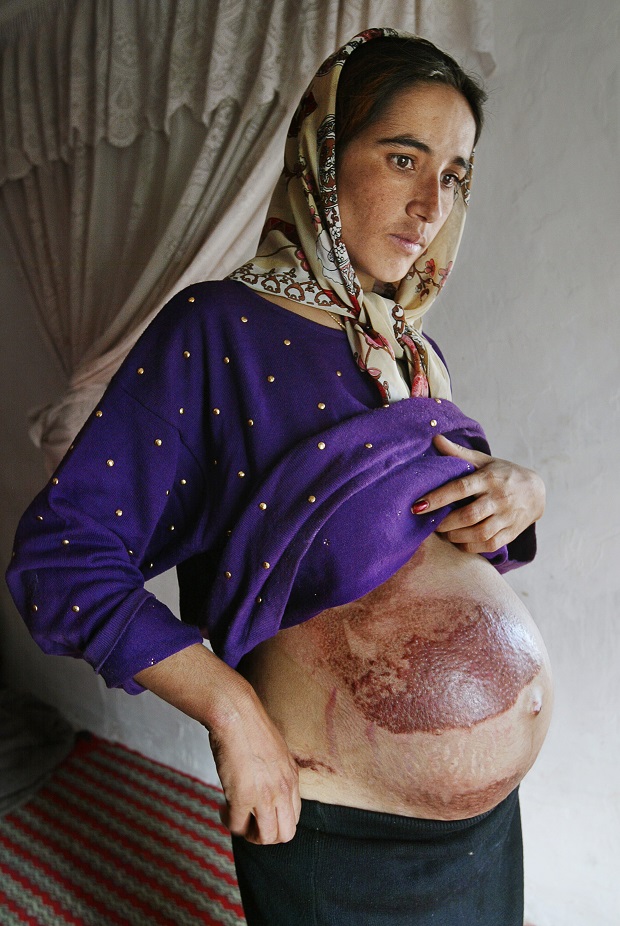 Twenty-year-old Mariam, who is nine months pregnant here, shows the scars that resulted from her suicide attempt three months earlier. Devastated by an abusive, violent marriage, she doused herself with household fuel and set it alight, subsequently spending twenty-eight days in the hospital. She now lives with her mother, and her husband is moving back in with her and her two-year-old daughter. Herat, October 21, 2004. (Photo courtesy of Getty Images.)

While western coverage of the situation in Afghanistan is awash with numbing statistics and numbers impossible to comprehend, Bronstein’s images “bring cold numbers to life,” writes Kim Barker in the foreword of the book. What differentiates Bronstein’s work from the rest – is that she delves beneath the surface, treading behind-scenes to reveal the daily lives of people existing against the harsh backdrop of war.

Bronstein’s coverage of Afghanistan transcends typical coverage, as she goes where other journalists rarely follow. Her photos take us behind the doors of Afghanistan’s refugee camps, hospitals, and military training centres. With a firm dedication to honesty, Bronstein is absolutely not afraid to lift up the rock and expose the uncomfortable truths beneath. The middle section of her book – entitled ‘the Casualties’ – is particularly hard to look at, as we are confronted with exactly the sort of scenes many of us would choose to ignore. But Bronstein forces us to look. 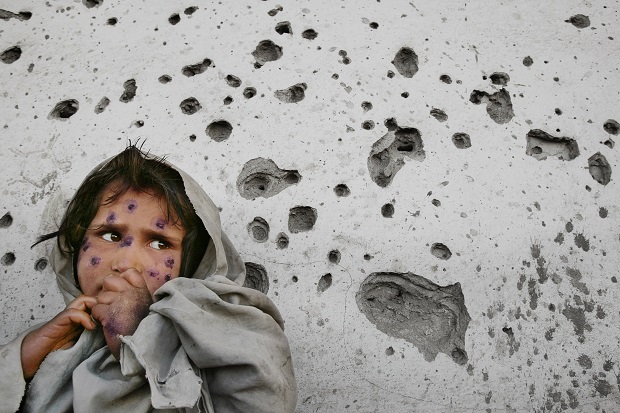 Mahbooba stands against a bullet-ridden wall, waiting to be seen at a medical clinic. The seven-year-old girl suffers from leishmaniasis, a parasitical infection. Kabul, March 1, 2002. (Photo courtesy of Getty Images.)

It is frequently cited by international rights groups that Afghanistan is one of the worst places to be a woman. In light of this statistic, Bronstein lends a special focus to the plight of Afghan women – highlighting their courage and resilience, but also the unfair treatments and obstacles pitched against them in a country where men call the shots and the female sex is generally seen as inferior. She presents us two sides of the story. Hope: women casting votes for the first time, girls raising their hands in class, and then the dark flipside: girls fleeing forced marriages, attempted suicides, drug addiction and domestic violence – all going to show that female rights are still an upward struggle.

“Working in Afghanistan as a female photojournalist has its unique difficulties,” writes Bronstein, which incidentally, made some situations impossible to photograph. On a recent trip for her project on war widows, for example, she often only had one chance to visit and capture her shots, because male relatives would find out she was there and forbid her to return. However, being a woman offered advantages too, Bronstein admits. Unlike men, she could enter the closed-off women’s quarters of homes.

Though Bronstein says the situation in Afghanistan has changed dramatically in every way, shape and form (“roads that I travelled years ago are hardly safe now,” she says, because of threats from bandits and Taliban forces), she continues to return to Afghanistan. Despite the obvious challenges, Bronstein says: “I keep going back motivated and inspired by those faces, pushing against the difficulties, hoping to find fewer doors slamming shut and more people seeing reasons to smile” – a statement that reflects her unwavering commitment to documenting these real lives, bringing a voice to those who have none. 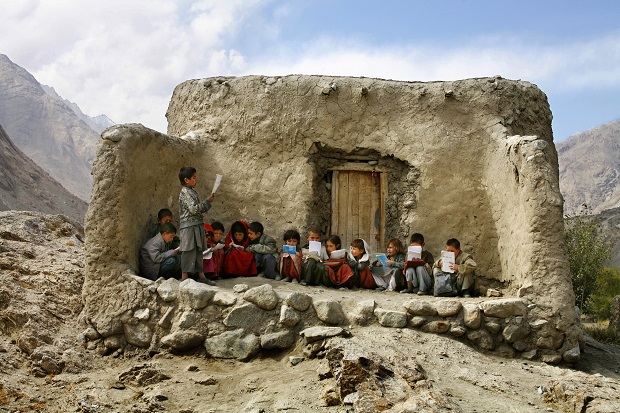 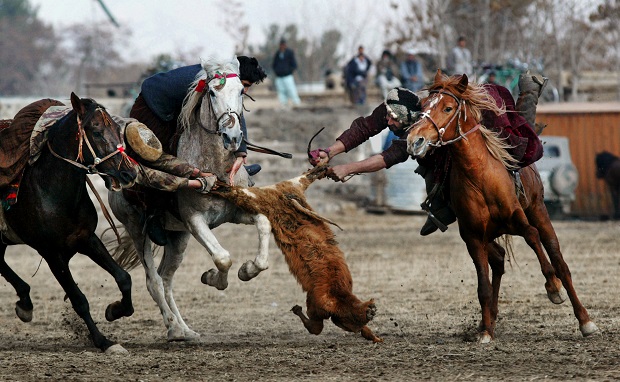 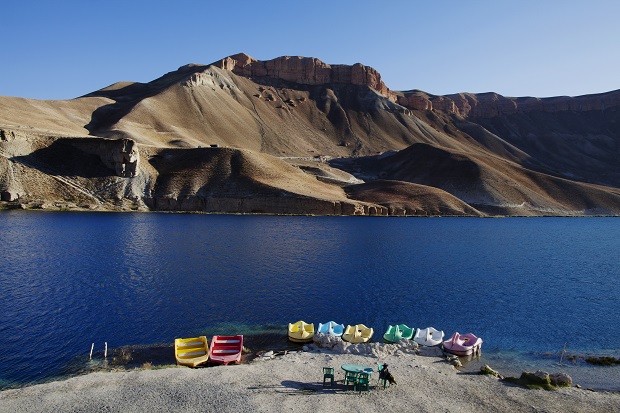 Swan paddle boats lie beached at the edge of one of the six lakes in Band-e-Amir National Park, which attracts tourists from across the country. Located in central Afghanistan, near the Bamiyan Buddhas, the area was declared Afghanistan’s first national park on April 22, 2009. Band-e-Amir, September 6, 2009. (Photo courtesy of Getty Images.)