Sing It From the Mountain Tops: The Women Reclaiming Cholita Identity in Bolivia 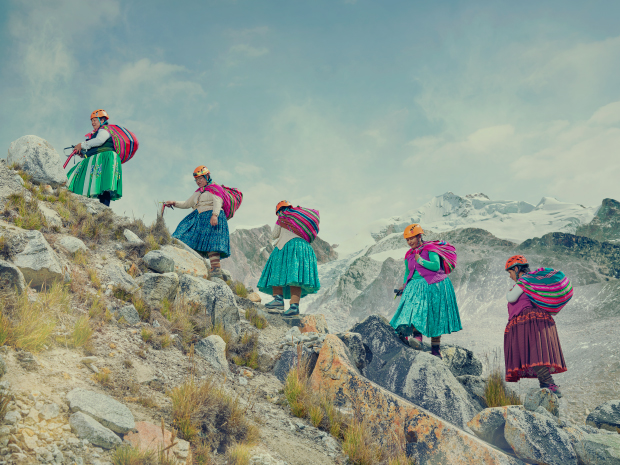 Zongo glacier with the Cholitas 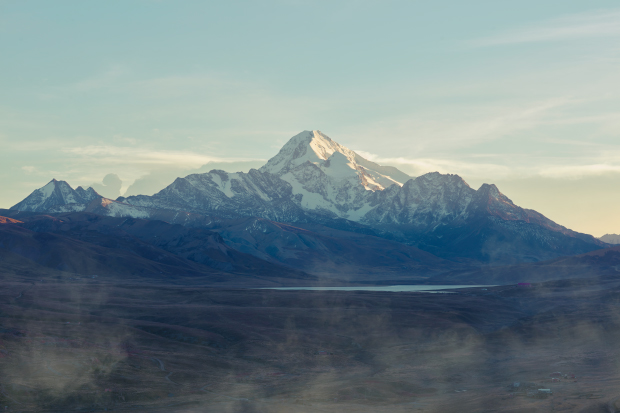 Originally from New Zealand, Todd Antony first got involved with photography when he was 15 and his father brought a Canon EOS 650 home from work. He was immediately hooked and studied photography at college and university for a year, before spending three years traveling around the world, working on cruise ships as a photographer.

Fifteen years ago he moved to London work as a commercial photographer and pursue personal projects such as Cholita Climbers, a series documenting Aymara indigenous women of Bolivia, who summited the 22,841ft peak of Mt Aconcagua — the highest mountain outside of Asia — in January 2019. They made this historic climb eschewing traditional climbing clothing in favor of their traditional, vibrant, billowing dresses, using their traditional shawls to carry equipment rather than backpacks.

“The word ‘cholita’ has previously been used as a pejorative term for the indigenous Aymara women of Bolivia. But these woman are reclaiming it as a badge of honor,” Antony says.

This June, Antony spent ten days in La Paz, documenting the climbing Cholitas and share with us his experiences making this vivid body of work. 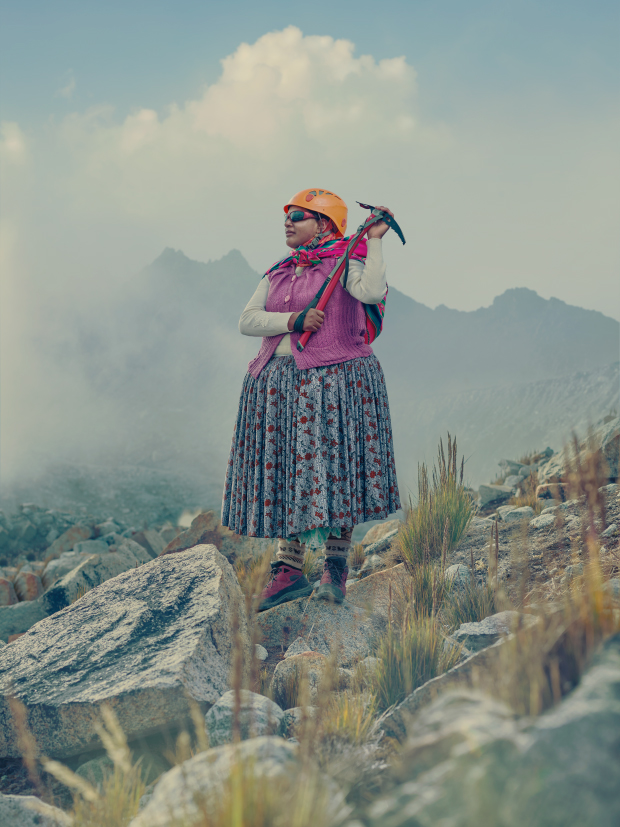 What inspired you to create Cholita Climbers?

“Each year, in addition to my advertising work, I try to undertake one or two personal projects to keep myself fresh from a creative standpoint. I get to go out and create work purely the way I want to, answering only to myself. The last five or so years these projects have lead me down the path of shooting various subcultures and groups around the world. The lesser known the better. I

“I’m fascinated by these small and compelling groups who have a unique perspective on life and the way they approach it. Aside from being creatively cathartic, shooting these projects helps to land me more ad work, and in turn the ad work helps finance the next project. It’s a perfect little symbiotic relationship. I’ve been to Japan to shoot Dekotora truck drivers, Reindeer racing in Lapland, and most recently to Bolivia to shoot the ‘Cholitas Escaladoras’ (Climbing Cholitas).

“Aside from the obvious visual fascination provided by the fact they climb while wearing their traditional, colorful Aymara dresses, as is always the case with these personal projects, it’s their back story that really sold it to me.” 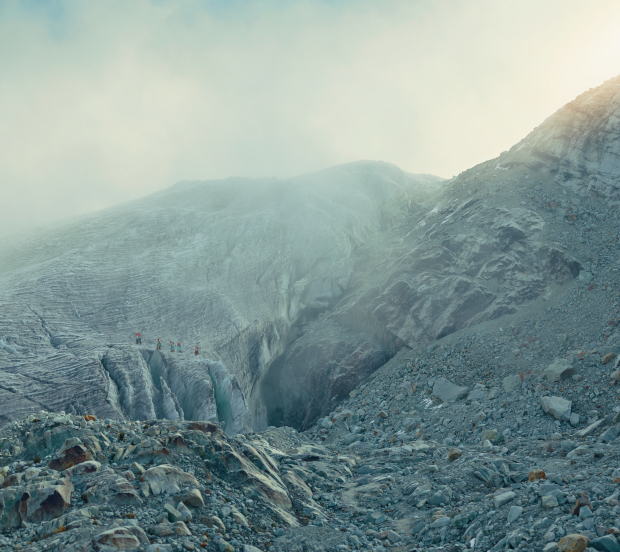 Could you give us background on the lives of Aymara women in Bolivia, and how the word “cholita” became a pejorative term to describe them?

“Since the Spanish colonized the region in the 16th century, and up until as little as 10 years ago, Bolivia’s indigenous Aymara women were socially ostracized and systematically marginalized. Indigenous people were forced to work as servants for Spanish occupiers and were required to wear certain garments (such as hefty skirts and bowler hats), which are now sources of pride for cholitas.

“The word cholita comes from the Spanish word cholo (chola for females) – meaning mixed-race or, pejoratively, ‘halfbreed’ or ‘civilized Indian’. But in this case it’s been appropriated as a badge of honor. The diminutive ‘-ita’, frequently used in Spanish, is affectionate and means small.

“These women are easily identified by their colorful billowing dresses, braided hair, and bowler hats. This clothing is derived from when they were forced to work as servants for Spanish occupiers and were required to wear certain garments. They have racial discrimination and could be refused entry to certain restaurants, using public transport and entering certain public spaces such as the capitals central square, Plaza Murillo

Now those garments are worn as a badge of pride for them. Reclaiming and owning what was originally forced upon them. While they have been organizing and advocating for their rights since at least the 1960s, their movement was further invigorated by the 2005 election of Evo Morales, Bolivia’s first Amerindian president. Since then the majority indigenous population has seen greater recognition and autonomy.” 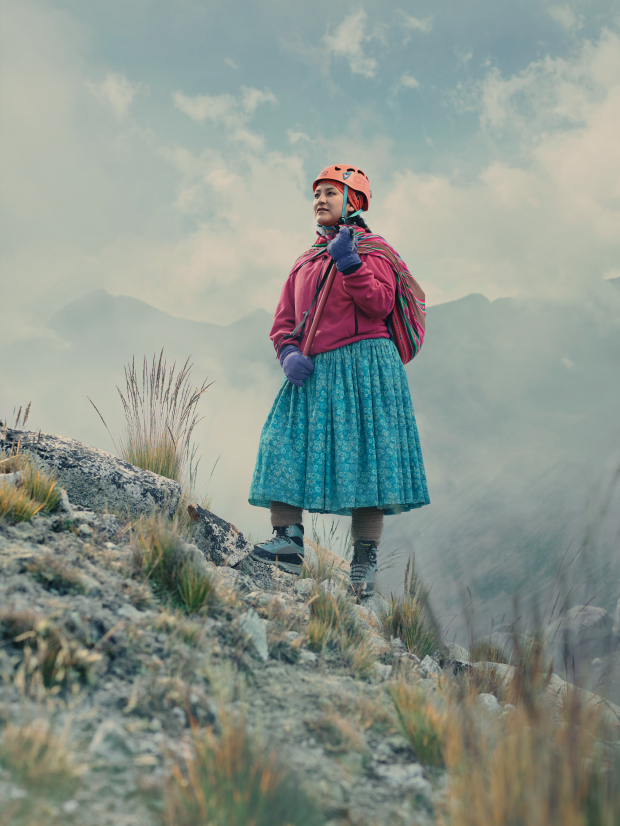 How did you come to connect with these women, and what aspects of their lives and culture were you looking to document?

“Once I had the idea of shooting a project with them firmly lodged in my head, I contacted a local Bolivian producer called Esteban Barriga Prado, and his production company Pariente. We sat down on Skype together for an hour or so and chatted the whole project through. He already knew the leader of the climbers, Lidia, so contacting them was really straightforward.

“These women were undertaking their endeavors in what are traditionally very male dominated areas in Bolivia — all this while proudly wearing their traditional attire, which is no easy feat in itself given what they are undertaking. So in both instances, they needed to be shot ‘in the act’ to be able to fully communicate what it is they are undertaking. And in doing so, showing the contrast between their clothing and the incongruous environment.” 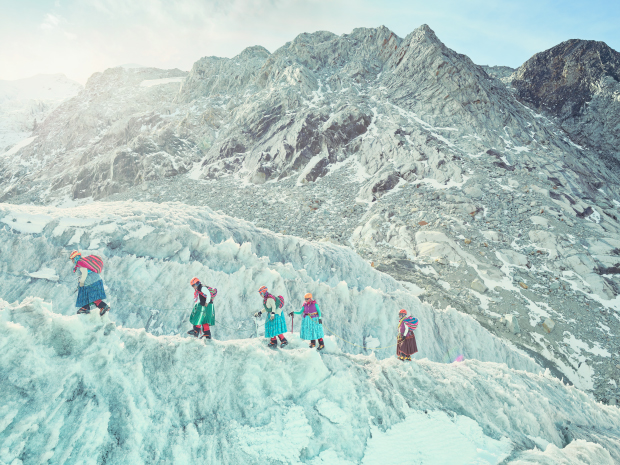 “These were shot in the beginning of June this year. There were a lot of logistical challenges given Bolivia isn’t very straight forward to get to, not being able to speak much or any of the language, and needing a healthy number of people to help us up in the mountain with my camera and lighting kit. Without having Esteban on the ground there it would have nearly impossible. But by far the biggest challenge was the altitude.

“You fly into El Alto in Bolivia, which sits on a high plateau 1600ft directly above the city of La Paz. From a distance the city’s densely packed two and three-story brick houses almost look like they are flowing up to the plateau’s cliff edge before cascading down its precipitous face like water flowing over a waterfall, down to La Paz below it.

“In places the houses seemingly defying physics and gravity as they stake their claim on the cliffs face. El Alto, as the name eludes too, sits at an oxygen neglecting 13,615ft in altitude. Our flight rolled into the airport at around 1am and this lack of oxygen becomes very quickly apparent. Unloading your camera cases off the baggage carousel onto your trolley suddenly becomes a slightly odd experience in that it feels like you’ve broken into a light jog in order to achieve this most Herculean of feats.

“The next few days are spent in La Paz acclimatizing, and nights are spent being impulsively woken up every few hours trying to catch your breath as your body adapts to the lack of altitude. Five days later, in the pre-dawn light, we set off for Huayana Potosi Mountain for the shoot. By the end of the first day we had climbed up the Zongo Glacier with the Cholitas, to a height of just over 16,000ft.

“I got a little excited about the prospect of a series of crevasses that I could just see the tips of above us from the foot of the glacier. It’s where I shot the group photo of the Cholitas perched in a line along a narrow ridge of a crevasse of ice, with further waves of ice in front and behind them. Very much worth the effort to get up there, but apparently the guide had said that for good reason.

“My assistant and I were absolutely wrecked by the time we turned around to head back down to base camp. Pounding headaches, completely void of energy and a strange buzzing sensation all over your body. You have to stop shooting every minute or so because the mere act of holding the camera and bending your knees slightly reduce you to being completely out of breath. Meanwhile the Cholitas looked like they were out on a beach walk at sea level.” 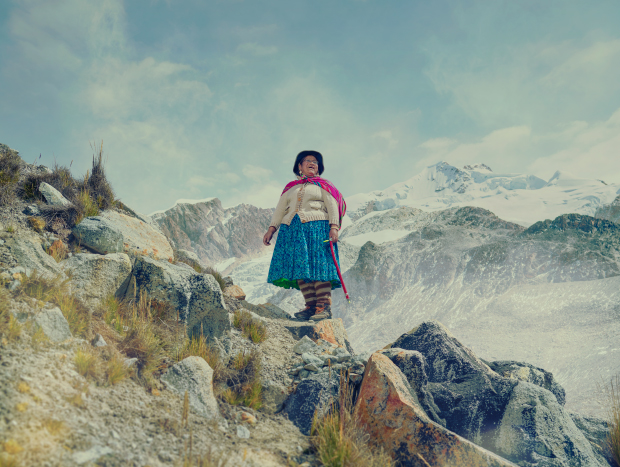 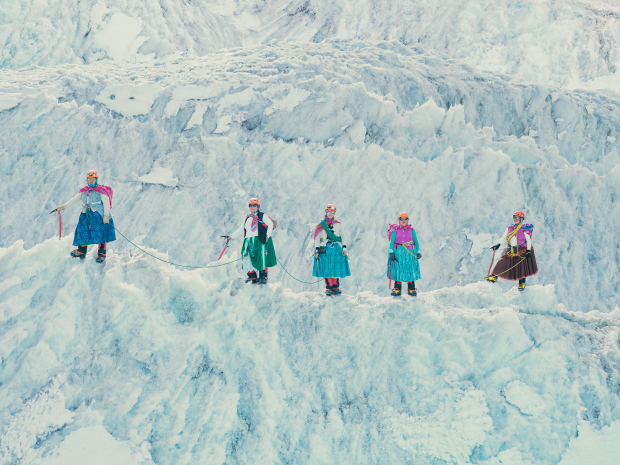 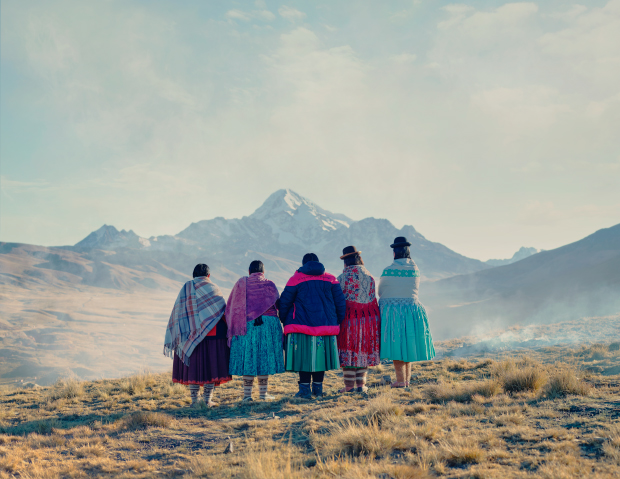 The Cholitas performing a Pachammama offering ceremony before we climb the mountain.