A Behind-the-Scenes Look at ‘Terrorist Rehab’ in Saudi Arabia 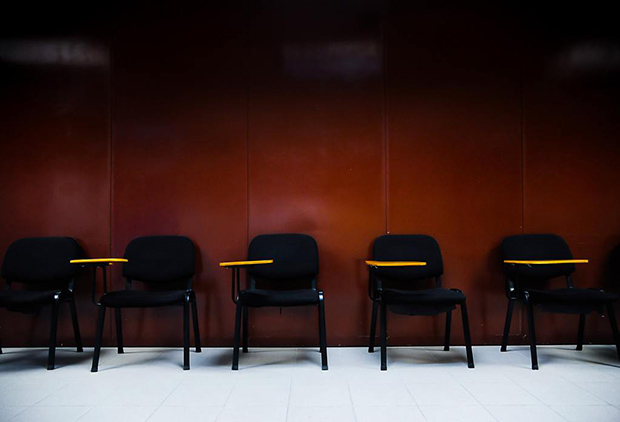 A classroom for members of the jail is lined with desks. Even though the desks are new, the participants have scratched their names, dates, hearts, and slogans into the wood. The black seats with wooden desks reminded me of a line of black clad IS members carrying kalashnikovs. At Al-Ha’ir prison, I had to use the prison’s camera and wasn’t allowed to take photos of any of the staff or inmates, which left me to photograph the evidence left behind by the inmates. I photographed some of the etchings in the wood, but the prison censored these photos. © David Degner/Getty Images 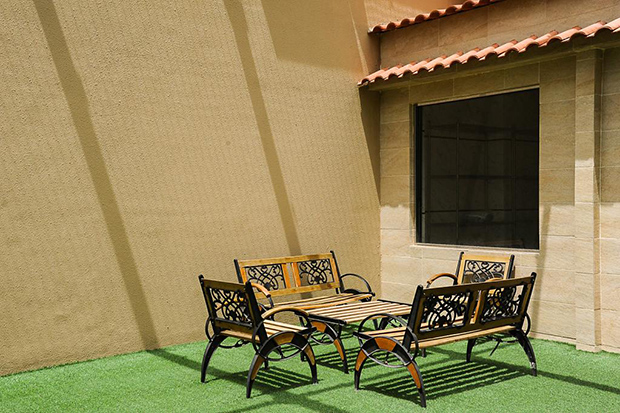 Inmates have a small area with astroturf to enjoy the sun at the end of each cell block. The Ha’ir prison is primarily for terrorists, we are told. Talking to human rights activists, however, gives the impression that there are different departments with different standards. Political prisoners sometimes come to Ha’ir, but hardly in the comfortable cells jihadists have. While the writers were interviewing another inmate under supervision, I was able to talk with some inmates alone. They saw many new inmates arrive after the bombing of Shia mosques in the eastern provinces in May 2015 and felt they were arrested randomly. As one inmate said, there is always the official story and then the unofficial story which they won’t let us see. But he said he couldn’t go into details. © David Degner/Getty Images 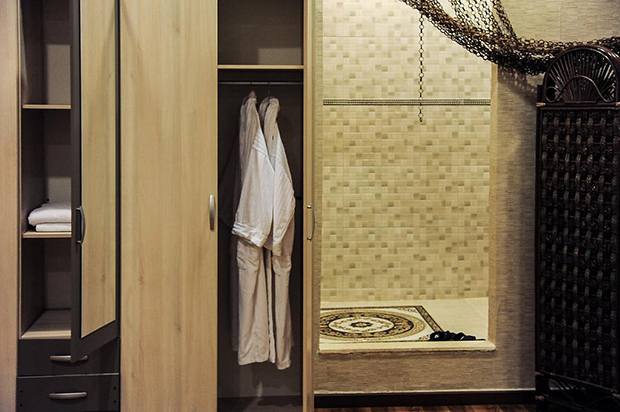 The Family House is designed like a boutique hotel with all the amenities for a family visit. The suites allow inmates to live with their family for short periods of time while incarcerated. The families and inmates arrive in chauffeured cars with the hotel logo; guests are given a key for their rooms, and the all female staff cares for them during their stay. © David Degner/Getty Images

In May of last year, Cairo photographer David Degner and Swiss journalist Monika Bolliger traveled to the Al-Ha’ir Prison in Saudi Arabia to see the living conditions of men who had been incarcerated on terrorism-related charges.

When they arrived, they were taken into a conference room and shown a PowerPoint presentation. The PR office gave Degner one of their own, pre-approved cameras. There were a few rules: he could not photograph the inmates, and any images could be reviewed and censored by the prison.

The ultimate goal of Al-Ha’ir Prison is to rehabilitate and reintegrate suspected terrorists into society. “It is a story that the Saudi government wants to promote,” the photographer told us. “They say their approach is more pragmatic and effective than simply throwing thousands of [suspected extremists] in prison for decades.”

The prisoners are required to attend classes with Islamic scholars as part of their de-radicalization. “They teach the inmates ‘correct Shariah thought,’” Degner explained. Prisoners learn, for instance, that they are not to declare Jihad on their own. Instead, they are to follow the Saudi leaders.

Inmates at Al-Ha’ir Prison are also given monthly conjugal visits with their wives and are allowed up to three days with family. The prison’s “Family Home” is a hotel that includes a playground for the kids.

Degner did get to have some interaction with the prisoners, albeit minimal. “While the writers interviewed inmates under the eye of the warden, I was ignored, which meant I could lean against the far wall with inmates in the shade,” he remembered.

He met one man who had worked at a hospital lab before his incarceration. “Even in his prison garb, he came off as a friendly nerd,” the photographer admitted. The man told Degner he was innocent of the crimes he’d been charged with, but he couldn’t say much more, so they spent the rest of their time talking about “soccer and family.”

After Degner had taken his pictures and Bolliger her notes, they were given a fancy spread in the conference room before visiting a facility called the Prince Mohammed bin Nayef Center for Advice and Care, where the rehabilitation process continues with psychology, more time in the classroom, job training, and even art therapy.

I asked Degner about his personal feelings about these kinds of facilities, where people suspected of crimes related to terrorism are given amenities, classes, and a shot at a future life with different choices. “A rehab program for terrorists is incongruous to the average American,” he responded. “I want us to think about that where the incongruity comes from. I’m trying to show that the situation isn’t simple, and the answer isn’t easy.”

During the few hours he had at the Prince Mohammed bin Nayef Center for Advice and Care, Degner saw a drawing of power lines in the gallery of inmate artwork. When he asked the art therapist about it, he was told it had been made by a former Guantanamo Bay prisoner.

“If you squinted the poles and power lines looked like prisoners in orange jumpsuits shackled together,” Degner wrote in an email. Then he added: “Even suspected extremists understand symbolism in art.” 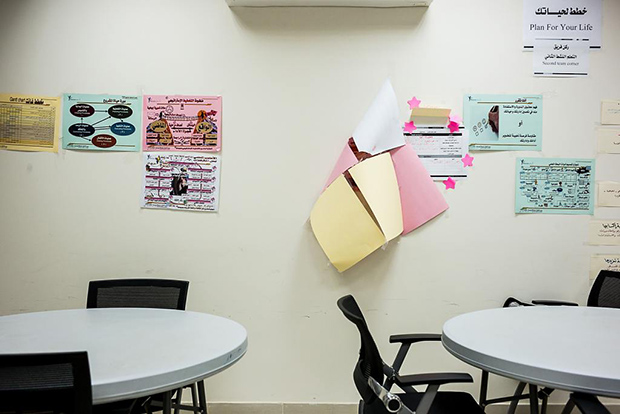 Many of the walls have slides on “The Life Cycle of a Project” and “Strategic Planning System.” One psychologist said that the inmates from Guantanemo prison often require the most time and effort to regain trust and overcome the traumas they faced there. © David Degner/Getty Images 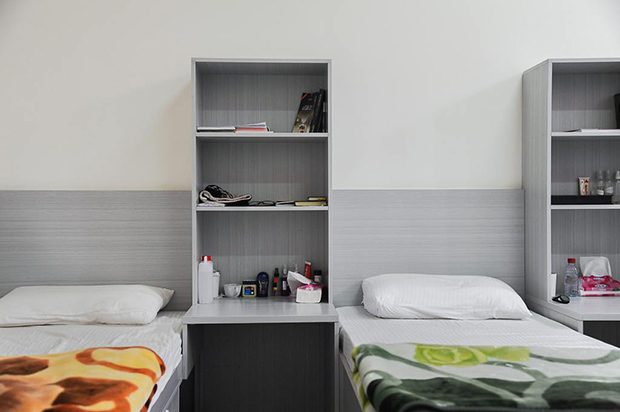 In the 5-person cells, each inmate gets a small area for their belongings. Many inmates have books and clocks; one inmate had a shelf devoted to different perfumes and scents. This inmate has a novel called “With Winter” on his shelf, which is described as a book about the internal conflict of faith of Muslims and a variety of problems that they face living in the West. According to reports from human rights groups, many other jails in Saudi Arabia are overcrowded and lack basic services. © David Degner/Getty Images 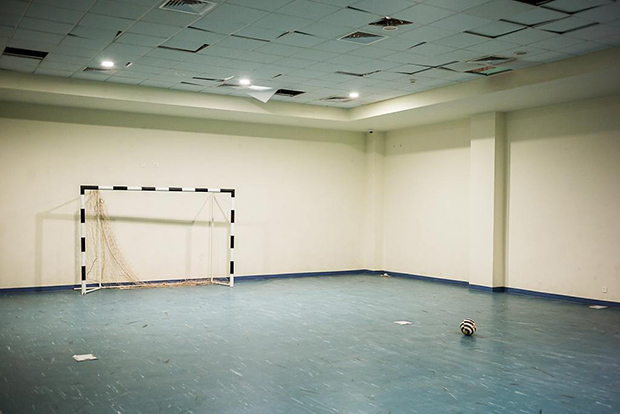 Inmates play in an indoor soccer field, but the ball sometimes hits the ceiling, causing tiles to fall. The tour we were given had a few oddities. First, we were followed by a video crew the whole time. They said it was just for internal use, but I felt it was to monitor our guides as much as to monitor us. The story of these rehabilitation prisons is one that Saudi Arabia really wants to spread, so they make it easy for journalists to see the official story but didn’t let the writers interview many inmates. © David Degner/Getty Images 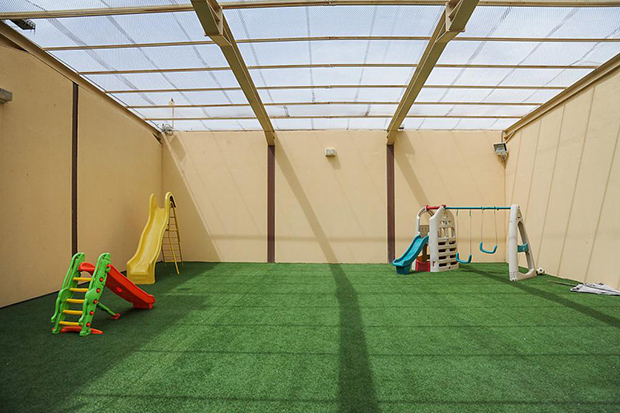 Behind the Family House hotel is an enclosed play area for children with the same fake turf that can be found in the inmates’ cell blocks. Our guide said it was most important for giving the parents some time alone. © David Degner/Getty Images 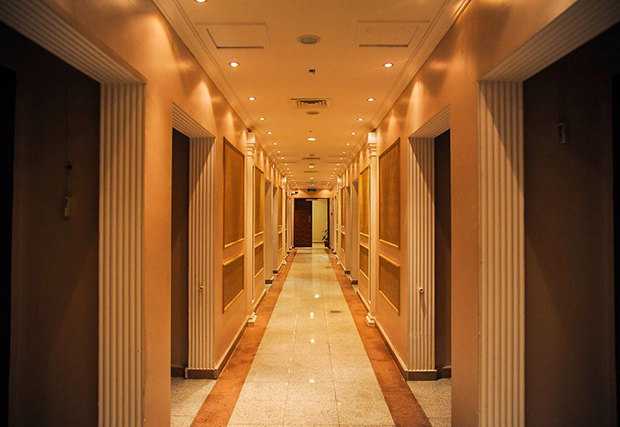 The hallway to rooms for short-term conjugal visits. Inmates also get monthly stipends of about $400 and about $2500 to give as a gift when released for a relative’s wedding. © David Degner/Getty Images 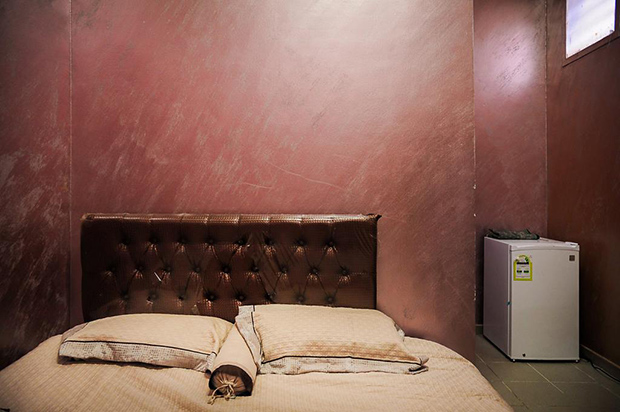 Inmates can receive visits from their wives in these simple rooms with a bed, bathroom, and mini-bar. There are also rooms for meeting larger family groups. The positive reinforcement and reintegration steps are emblematic of the Saudi approach to its homegrown jihadists, which would not be politically acceptable in the West. Inmates are administered viagra before their visits. © David Degner/Getty Images 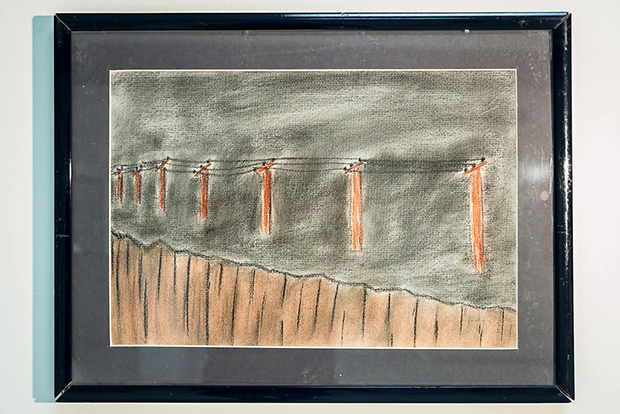