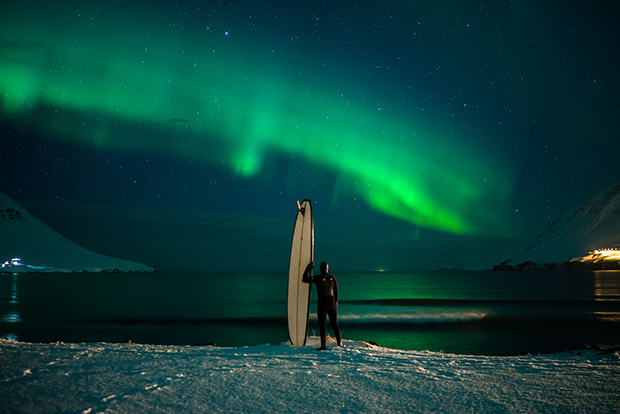 Justin Quintal standing under the northern lights while filming for Under an Arctic Sky. Shot with Sony a7S II with 35mm f1.4 ©Chris Burkard/Massif

Photographer Chris Burkard has navigated frozen waters, survived rugged waves, and walked beaches so remote they don’t have names. He’s smiled his way through harsh blizzards, braved arctic winds, and come face-to-face with some of the wild animals who call this planet their home.

Burkard was only nineteen years old when left his job at the time to become a professional surf photographer, and his connection with water has only become stronger over the years. “My entire life I’ve lived less than a mile from the ocean,” he recently wrote on Instagram, where he has well over two and a half million followers.

But Burkard isn’t your typical surf photographer. “I set out to find the places others had written off as too cold, too remote, and too dangerous to surf,” he told the audience in a TED talk a few years ago. For his book Distant Shores, he documented surfing on six of the seven continents on earth.

His film Under An Arctic Sky tells the story of six surfers who made the journey to Iceland right before the arrival of the worst storm in a quarter-century. They risked everything for a shot at once-in-a-lifetime waves, and with just three hours of sunlight per day, their journey was illuminated by the aurora borealis.

The film is currently touring, and Burkard made time in his packed schedule to tell us a bit about his process and motivations. Below, he shares some of his most memorable stories and insights into the importance of conservation. He also gives us a peek into his camera bag and reveals how he uses Sony mirrorless cameras to make the photographs the Sierra Club once called “too good to be true.” 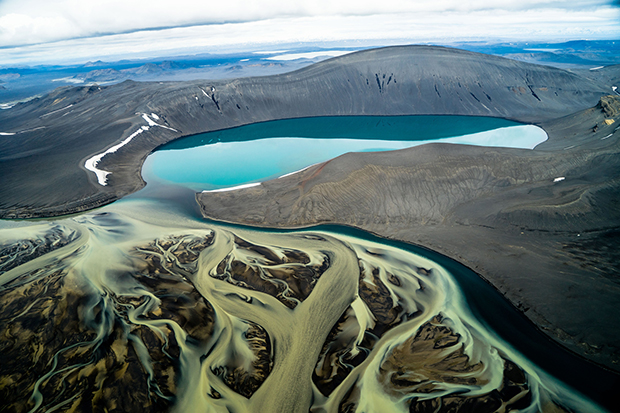 Icelandic glacier rivers in Iceland’s highlands or “Hálendið”. These iconic rivers are currently being threatened by the installation of hydrothermal dams. Shot with Sony a7 II with 24-70 f4. ©Chris Burkard/Massif

What role do you think photographers have to play in the preservation movement?
“I used to believe that, in order to be a conservationist, you had to be an old rich guy, wearing white khakis, spectacles and carrying a notebook everywhere you went. But recently, I’ve begun to realize it’s actually much simpler than that. All you have to do is care about something. We are all conservationists if we share our perspective on a subject and inspire people to care about preservation.” 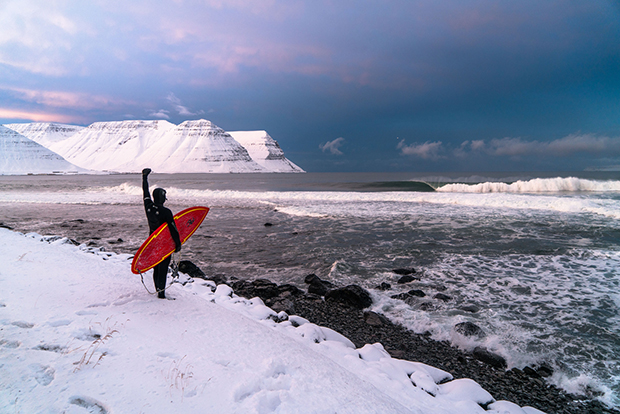 Justin Quintal looking out at some of the best waves anyone has ever seen in this region of Iceland. It was in this moment that we knew all the trip was worth it. Shot with Sony a7R II with 16-35 f4 ©Chris Burkard/Massif

Under An Arctic Sky started touring today! How did you meet these surfers?
“I have known most of the surfers for many years prior to this trip. It was their ability to endure harsh conditions that really drew me to them. I felt like they appreciated the landscape, and that is something we both had in common. I never travel somewhere with someone who isn’t excited about the place and the location first and foremost. It makes the search for waves that much more rewarding. “

Without spoiling the film, could you tell us your single most powerful memory from your time in Iceland with these surfers?
“It was definitely one of those last nights. It was freezing cold, and we were staring at perfect waves breaking under the northern lights. We were all kinda speechless, and we knew it was ‘go time.’ I still get chills when I watch that scene. “

What are the harshest, most wild conditions you’ve ever worked in?
“It was definitely on a trip to Norway years ago in March. It isn’t the coldest month, but it is the windiest. Dealing with the cold water is brutal, but the wind is so much worse. I just remember my head feeling like it was shrinking because of the cold. Like a deep bone chill. I was out for way too long and got pretty bad nerve damage from the session. It still affects me a lot today.” 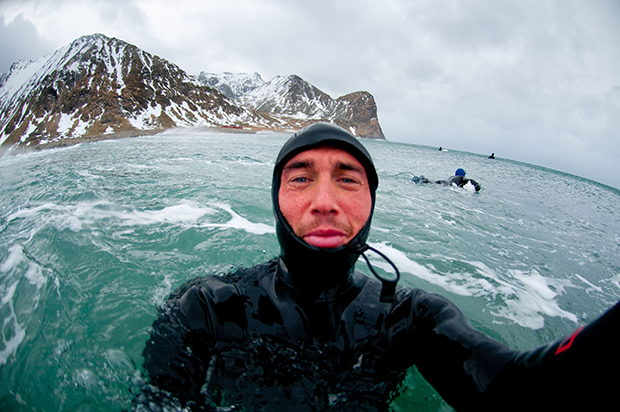 Chris Burkard shooting in the water in Norway before going hypothermic shortly after this photo taken.

You work in remote places, but your pictures reach a lot of people. As someone with millions of Instagram followers, can you tell us a bit about the importance of social media?
“I think the key is to make sure that you are painting these places in the correct light and making sure that preservation is always at the center. Going there to take a photo is great, but it’s so much better if you can discuss the important issues these places are facing. As photographers, we have a responsibility to share what we love and fear losing. By sharing these places, you also help ensure their protection. People can’t vote and care about what they don’t know.”

As the Earth’s wild places become more threatened, what do you see for the future of landscape photography?
“I’ve always taken a unique stance on conservation. I’d rather have people see a photo of a place online or in a magazine and be inspired to care about it– even if it simply means they drive up to the place, selfie stick in hand, and post about it on Instagram. While many contend that this sort of behavior is ruining the solitude and beauty of these places, I’ve always struggled because I can see both sides to this argument. The reality is that the crowds and people who visit are usually our best protection for wild places. In my opinion, the more people that can experience the beauty of these wild places, the better. Things people care about don’t tend to disappear as easily.”

Can you tell us about the first time you used a full-frame Sony camera? Which one was it, and what was your first impression? Did anything surprise you?
“It was probably a few years ago, right when the a7 came out. I was blown away. It was so small and light, and the quality was incredible. I was shocked that I was getting less quality from a much bigger and bulkier camera.”

What’s your number one workhorse camera these days?
“The a7R II, without a doubt. That is the one that always goes with me. I hate compromising quality. “

Has there ever been a moment you were especially grateful not to have a bulky, heavy camera?
“Oh man, there have been so many. When you shoot in the water, small cameras are the difference between getting the shot and not getting the shot. Swimming for hours with a tiny housing is truly amazing and makes everything more manageable and safe.” 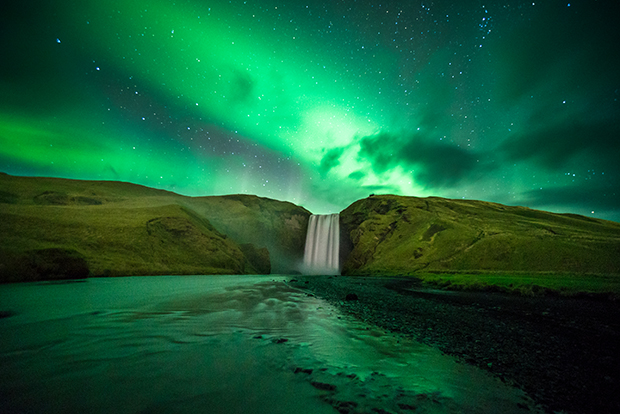 Has the Sony system affected your astrophotography at all?
“Yes, Sony has changed the game in regards to astrophotography. The a7S II is a 12-megapixel camera that is pretty much purpose-built for shooting in low light. It has made night shooting much easier. The ultimate reward is capturing an image at night that mimics what your eye sees, and the a7S II does that.”

What about aerial photography? Do you use the Sony cameras for those projects too?
“The past few year, I’ve been investing a ton of time into aerial photography, and more specifically, into shooting Iceland’s glacier rivers. Every image I’ve shot of these glacier rivers have been on a Sony. The dynamic range on the a7R II allows you to edit an image in ways I never thought were possible, which is so important when shooting aerial photos.”

Have people responded differently to your images at all since you made the switch to Sony?
“Back in 2014, I was shooting with Sony cameras as well as with cameras from two other leading brands. At the end of the year, I realized that all of my favorite images were shot on the Sony. That’s when I decided to make the switch. My goal when photographing a place to show it as accurately as possible, while also illustrating it in an impressive and unique way. Sony has allowed me to do that. I can’t tell you how many times people have asked me, ‘How did you get that shot?’”