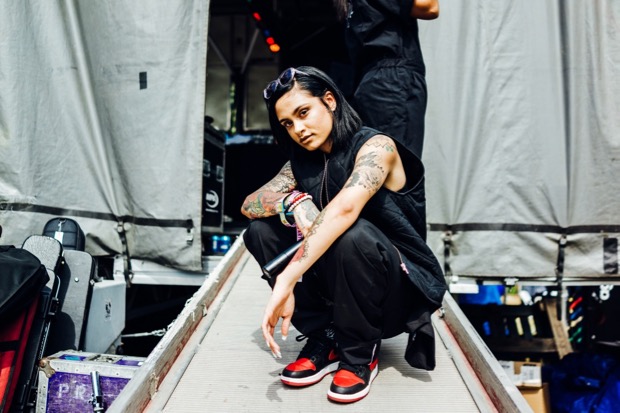 Kehlani backstage before her set at ACL Fest 2015. Shot with the Sony RX1 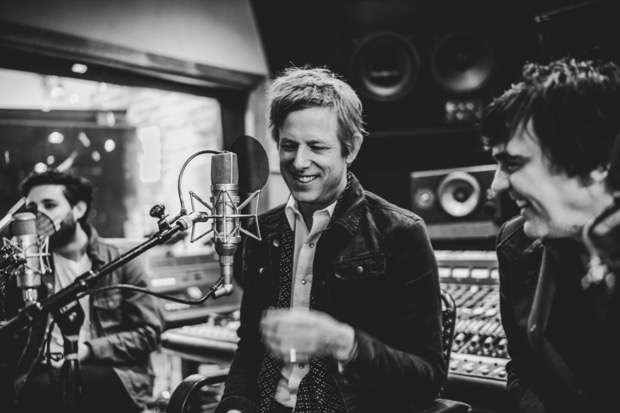 Spoon photographed in Jim Eno’s studio on December 20th, 2016 – Almost 11 years to the day of Wadsworth’s first concert shoot with the band in 2005. Shot with the A7RII

Austin music photographer Chad Wadsworth is persistent. Early on in his career, he shot live events just for the joy of it– without any guarantee that his pictures would be published anywhere. If he didn’t have tickets, he’d show up anyway and hope for the best. A lot has changed over the course of his career, but one thing remains the same: rain or shine, Wadsworth is willing to go the extra mile. In fact, the last time he photographed Austin City Limits music festival (it was his tenth time shooting there), he walked thirty-three miles over the course of a single weekend.

Music photography is a challenge anywhere, let alone in “The Live Music Capital of the World,” but Wadsworth has managed not only to break into the industry but also to stay on top of it. His pictures continue to grace the pages of magazines like Rolling Stone, Pitchfork, and SPIN, and he holds the title of Global Red Bull photographer.

Wadsworth has also been named a Sony Artisan of Imagery, joining an elite group of some of the world’s best photographers. In this role, he will work alongside the brand to help develop the next generation of cameras.

“Festivals are a war waged on the body,” Wadsworth has said. But since he’s teamed up with Sony and switched over to their lightweight series of mirrorless cameras, it’s all gotten much easier. He still has to be persistent– that’s the name of the game in music photography– but now, he has the freedom to move and catch the elusive moments others might miss. 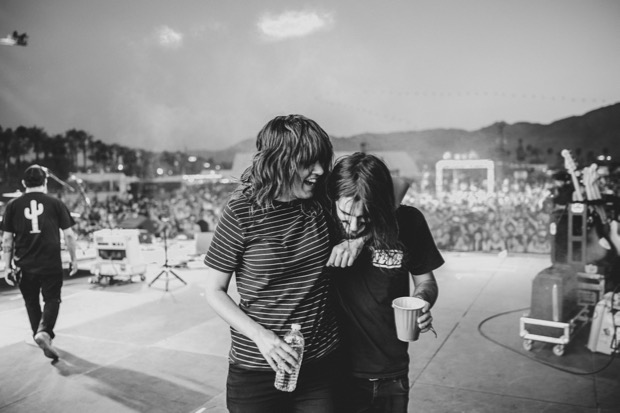 Courtney Barnett exits the stage after a triumphant 2016 Coachella set. Shot with the Sony RX1RII

You knew you wanted to be a music photographer when you were in high school. Did you have any great mentors early on— either in real life or in the media— who encouraged you to pursue it?
“I wish, but no. My interest in photography took a back seat during my college and early work years. It wasn’t until I moved to Austin, TX, in 2005 that I decided to jump in. Spoon, one of my favorite bands, was headlining a local show at the Parish on 6th Street, so I figured, ‘Why not give it a try?’

“I called up a local radio station and asked them if I could cover the show for them. They declined, so I got my first taste of rejection. I brought my camera anyway. What a rush that first time was! And the photos weren’t too horrible. I sent them to the radio station in the morning; they liked them, and that started me on the road to shooting more live music.” 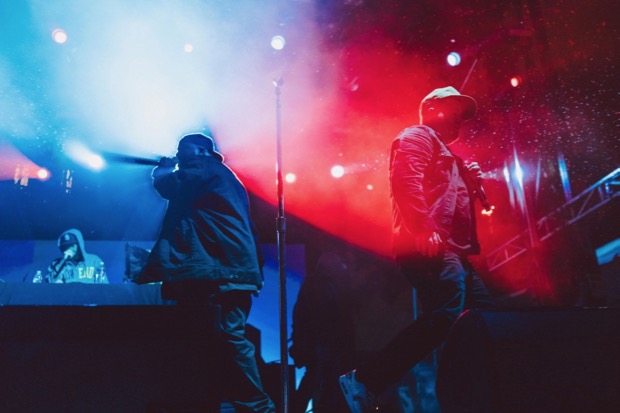 Run the Jewels playing in a torrential downpour during Day for Night Festival, Houston, TX 2016. Shot with the Sony RX1RII

What do you wish someone had told you early on about photographing live music?
“When I started, there weren’t many people in the pits. Digital photography was just starting to take off, but photography was still expensive, and the technology was not friendly to low-light concerts.

“The biggest lesson I learned was to be a photojournalist in the most traditional sense. In those first years, I was obsessed only with what was happening on stage, ignoring the fans, the venue, and the general atmosphere. Shooting festivals helped break me of that bad habit.” 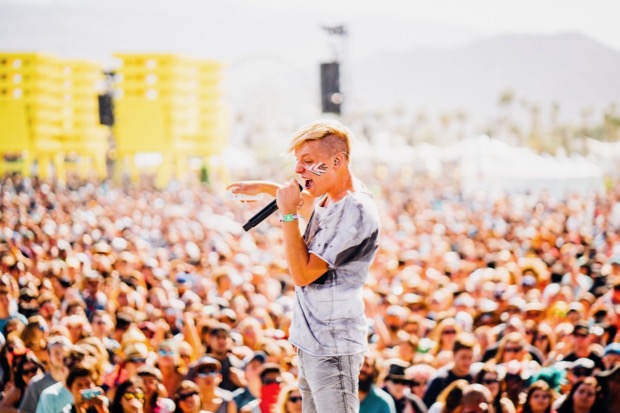 Robert DeLong heats up the crowd at Coachella, 2016. Shot with the Sony a7RII

What makes Austin the perfect place for a music photographer?
“There’s no doubt that Austin has a historic and diverse live music scene, but what makes it the best town is the photographers. Some of the top music photographers call Austin home, and we have a super strong community. As a collective, we support and inspire each other.”

What’s your secret to getting great crowd pictures?
“There’s no big secret. Just approach a live music shoot as a journalist. Take it all in. By staying open to the whole scene, you increase your chances of capturing something great.” 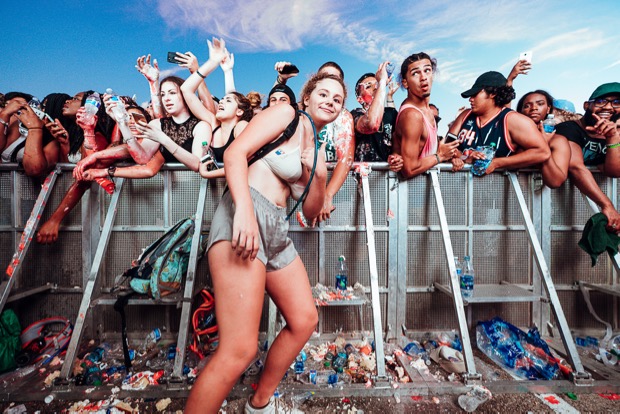 How did you become a Sony Artisan of Imagery?
“I couldn’t tell you exactly how I got on their radar, but what an honor it has been. The program is run by individuals who appreciate and respect the art and the history of the photographic medium.

“I recently got to travel with Sony Artisan, Magnum Photographer, and fellow Austinite Eli Reed, and during our trip home, he walked me through some of his retrospective images while waiting in the airport. I know many of your readers are familiar with his work, so I hope they will appreciate what a special opportunity that was.”

Do you remember the first time you used a Sony full-frame camera at a live performance?
“The first full-frame mirrorless model I used at a live performance was the original Sony a7. It was a moment I had been waiting several years for. For concerts, the a7 allowed me to lighten my bag dramatically and use unique adapted legacy lenses and small primes that I couldn’t effectively mount on a DSLR. I bought an RXI soon after the a7, and that combination changed the way I shoot forever.” 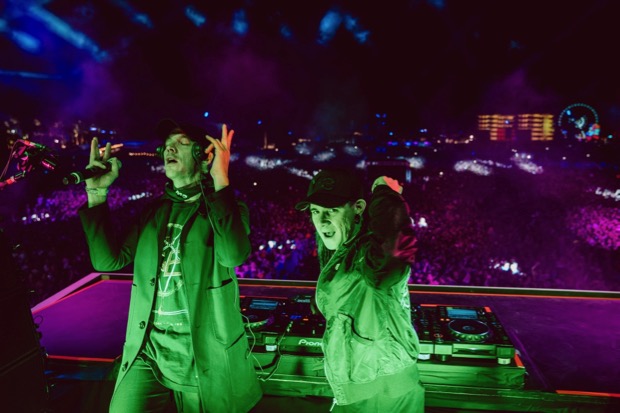 Jack Ü (Dipo and Skrillex) at Coachella 2016. Shot with the Sony a7RII

What camera and accessories do you always pack when you’re going to a big festival?
“You can walk as many as 15 miles a day at a festival like ACL or Coachella, so I don’t pack much. Usually, I’ll have one interchangeable lens body (a7RII or a9) and the RXIRII with its Zeiss 35mm f/2 lens for general atmosphere shots. I generally don’t carry a big 70-200mm zoom; instead, I’ll pack a couple fast primes. I’ll bring some spare batteries, a power brick for charging my phone, a lens cloth, and most importantly, ear plugs.

Do the Sony cameras have any effect on how you connect and interact with subjects?
“I can tell you with absolute certainty that the latest autofocus technology in the a9 is going to improve how we shoot portraits. Using the eye AF feature to track the subject’s eyes, paired with 20fps drive, allows the photographer to interact with the subject in a more natural way. I find myself taking my eye away from the camera and looking right at my subject, letting the camera acquire focus. That’s something I could never do with a DSLR.”