Photojournalist Cristina Mittermeier on Conservation, Hope, and What It Means to Take Pictures that Matter (Sponsored) 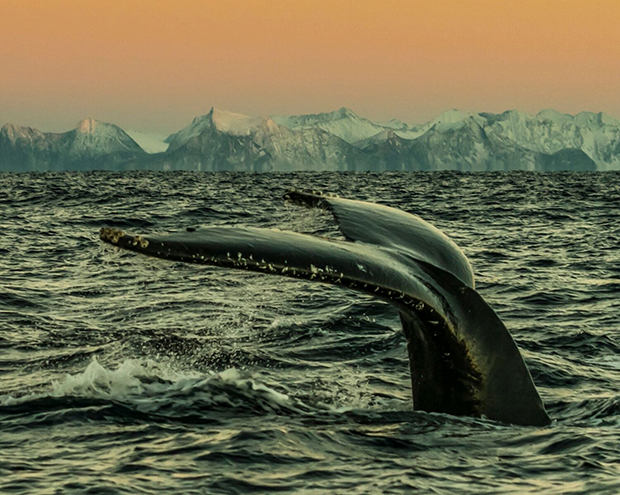 The fluke of a humpback glistens with the amber light of sunset in the northern fjords of Norway, where these marine mammals gather in large numbers to feed on the abundant herring schools that enter the fjords to overwinter. Shot using the Sony a7R mirrorless camera 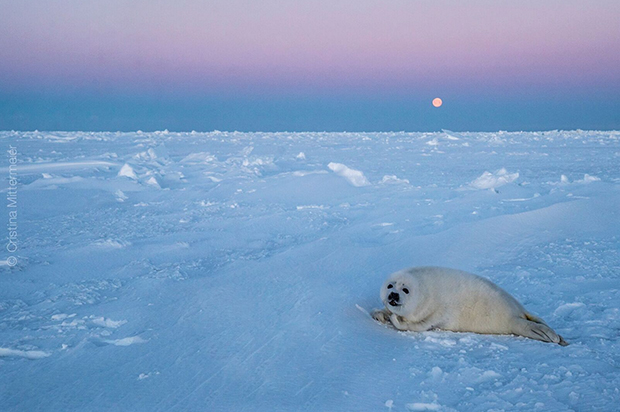 A baby harp seal, born just a few days ago, eyes me suspiciously under the full moon in Iles de la Madeleine, Quebec, Canada. At night, the harp seal mothers head into the holes they have dug on the ice to feed while they leave their babies alone for a few hours. Shot using the Sony a77 II mirrorless camera

British Columbia-based photojournalist Cristina Mittermeier has plunged into the depths of the seas of Madagascar and the Brazilian Amazon, climbed the mountains of Hunan and South America. She’s witnessed the caves of the ancient Maya civilization, where she swam amongst the remains of human beings who traversed the very same land thousands of years earlier.

Mittermeier is a conservationist, bringing to her work the philosophy once held by the Iroquois Native Americans, the notion that in order to live an ethical and sustainable life, we must think not only of ourselves in the present moment but also of mankind and our fellow creatures seven generations into the future.

For Mittermeier, there is no boundary separating man from the earth, land from sea, or art from activism. Her photographs, taken on every single continent on the planet, capture places, communities, and individuals whose continued existence is uncertain.

The animals, indigenous peoples, and fellow conservationists she has devoted decades to preserving stand at the precipice of irrevocable change; depending on the actions of each of us, as nations and as people, they could be wiped away entirely. Mittermeier’s work isn’t about the impending oblivion of global warming, lost land, and climate change. Instead, she concentrates on those rare moments that give her hope.

As a Sony Artisan of Imagery, Mittermeier has brought her voice to a large global community and continues to inspire people to step up and make a difference. We interviewed the photographer about her experiences, her connection with the water, and the mirrorless cameras she trusts to make images that matter.

How does your background in science influence your photography? What are you able to do as a visual artist that you might not be able to do as a scientist?
“I feel like my job as an image-maker and story-teller is to translate what science is saying into a language that regular people can relate to, and to do it in an emotional way. Because I have an undergraduate degree in marine biology, I can understand and interpret the data and I can apply that understanding to the photographic process.” 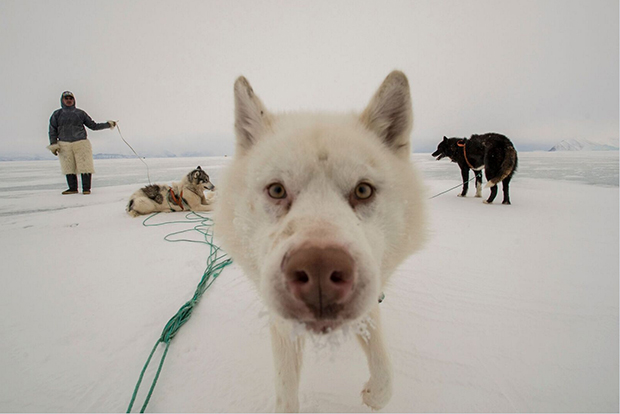 An Inuit hunter controls his husky dog team by using a seal skin whip Near Qaanaaq, northern Greeenland. The sound of the whip is all the dogs need in order to obey, and obedience is paramount to the survival of both dogs and hunter. Shot using the Sony a7S mirrorless camera

Describe the most incredible, unforgettable encounter you’ve ever had with a marine animal.
“My most recent trip to the northern fjords of Norway allowed me to spend a lot of time in the water with wild orcas. There are no words to describe what it feels like to be ‘echo-located’ by such a large animal and the amazing feeling of fear, mixed in with excitement and delight to be in the crosshairs of the gaze of an orca.” 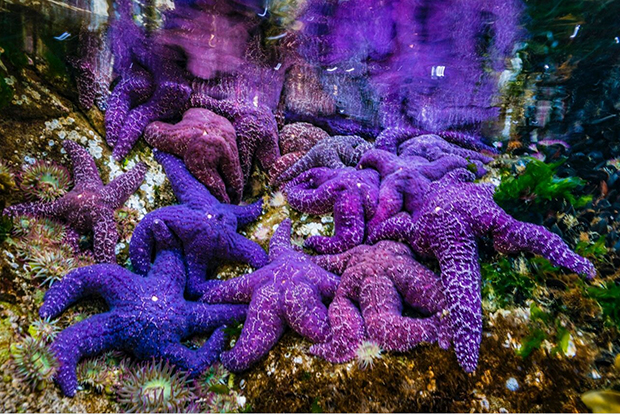 You started out hoping to be a wildlife photographer. What made you make the shift to photographing primarily people?
“It has been a long journey for me in photography. It is true that I started out wanting to focus on wildlife, but at the time I was a young mother and I just didn’t have the time to make a commitment to wildlife photography. Instead, I decided to focus on people, because traveling to remote villages was something I could often do with my kids. As my children have grown up, I now have the time to return to photographing wildlife, and even to delve into underwater photography. It feels like the road ahead is still very long and the learning curve as challenging as ever.”

You’ve learned a lot from your travels and indigenous subjects about sustainable living. What’s the most important thing one of your subjects has taught you?
“The most important lesson I have learned from people that we often deem ‘poor’ is that material wealth has very little to do with happiness. For some of the most marginalized people on the planet, the certainty of a meal, clean water and a warm fire, is enough to feel content. Happiness is found in immaterial things, like the joy of speaking one’s own native language, or observing rituals and traditions, or belonging to a community. More than anything, happiness is found when we know and understand our place in nature.” 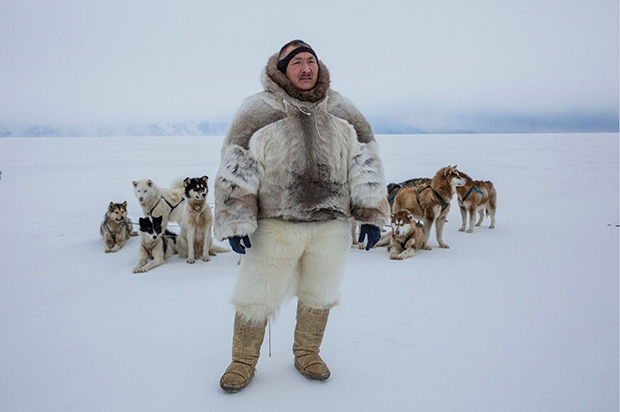 You’ve visited some remote corners of the world. What was the most difficult place to gain access to, and how did you secure your spot?
“I would have to say that the most remote and difficult place I have ever traveled to was northern Greenland. The village of Qaanaaq is the northernmost human settlement in Greenland and from there we took off by dog sled on a camping trip over the frozen sea. We traveled with a group of traditional Inuit hunters for two weeks through some of the most treacherous and beautiful landscape I have ever seen. It was cold, and harsh and gorgeous. I will never forget it!”

How are you seeing globalization influence the lives of indigenous people? Have these Western influences—iPhones, etc—been positive, negative, or both?
“There are very few places left in the world that are not touched by technology and Western influences. One can never make the mistake, however, of assuming that just because remote indigenous communities have access to technology and modern amenities, they have therefore lost their traditions. Culture is far more than the way we dress or the tools we use, and I think in many cases the use of technology has allowed indigenous people to empower themselves in all sorts of ways, including politically and economically.” 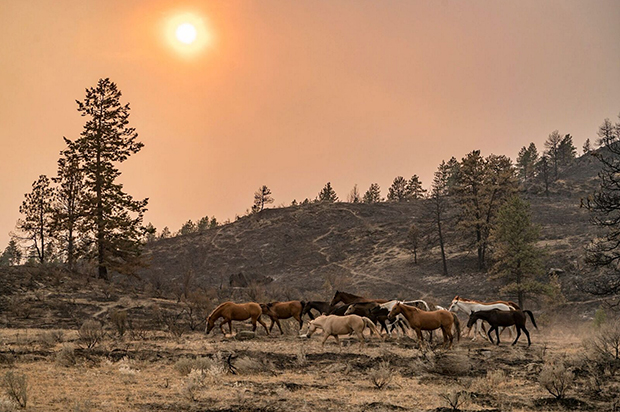 A group of horses wanders in what remains of a burned forest near the town of Omak, in Washington State. Forest fires linked to warming ocean temperatures destroyed thousands of acres of forests as well as homes and other infrastructure. Shot using the Sony a7R II mirrorless camera

If people could take only one thing with them from looking at your pictures, what do you hope it would be?
“Perhaps the most important message I want to convey through my work is that humans and nature are inextricably linked and that we need to find a more harmonious, less exploitative relationship with our natural world if we want to preserve the ecological integrity of our planet.”

Are you optimistic about the future of our planet? What motivates you to continue this kind of work in the face of all the discouraging things you see happening? What gives you hope?
“I am a perennial optimist and even in the face of tremendous change, I am full of hope. What encourages me the most is meeting so many other people that care about preserving the ecological integrity of our planet and that are working hard to protect endangered species, fragile ecosystems and the cultural knowledge of indigenous people. I believe that we are experiencing a global awakening and that huge issues, like climate change, will be solved in our lifetimes. My work as a visual communicator is to make sure that message reaches as many people as possible.” 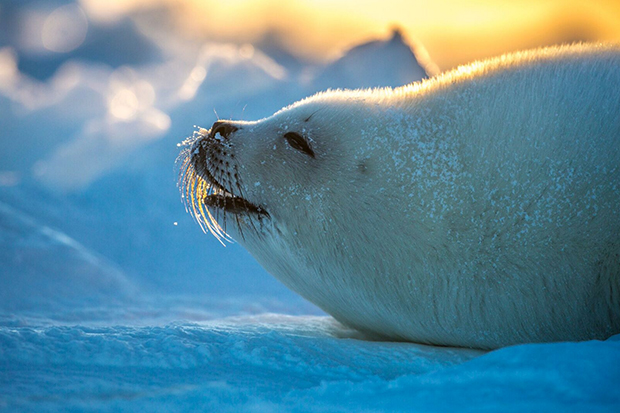 A baby harp seal voices its distress at being left alone by its mother in Iles de la Madeleine, Quebec, Canada. After giving birth, mother seals have to head back to sea to feed so they abandon their pups for several hours each day. Pups are weaned within a few short weeks from birth. Shot using the Sony a7S mirrorless camera

How has Sony helped to support not only your vision as an artist but also your mission as an environmentalist?
“Sony has been a great supporter of my work. Being able to use the enormous and influential platform provided by this global corporation to share my work has given me access to a much larger audience that would otherwise be very hard to reach.”

What convinced you to make the switch to mirrorless photography and Sony mirrorless cameras in particular?
“For me it has been a combination of the smaller size of the cameras and the impressive performance of the new sensors. I really appreciate being able to work with lighter and more powerful gear. I think mirrorless is the way of the future.” 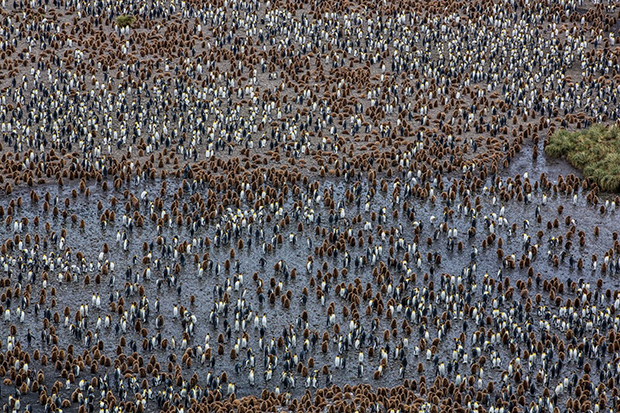 There are very few sights more impressive than seeing a colony of up to 500,000 King penguins (Aptenodytes patagonicus) that come to Salisbury Plain in South Georgia to lay their eggs and hatch their young. Shot using the Sony a7R II mirrorless camera

Has traveling been made easier by the switch from DSLR to mirrorless? Have you downsized at all since you started using the Sony cameras?
“Absolutely. Increasingly, the cost of excess baggage is making it harder and harder to work overseas. Mirrorless makes it possible to carry a lot more gear for a lot less weight.”

How have your subjects around the world responded to the smaller, less intimidating cameras?
“The kind of work that I do depends on the ability to be unobtrusive. Smaller cameras that have a true ‘silent shutter’ feature make it a lot easier to work in intimate spaces.” 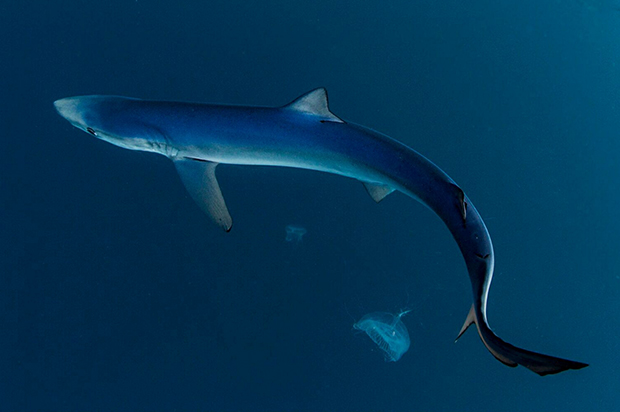 A flash of electric blue out of the corner of the eye is all the warning you get when a blue shark first approaches you. Sleek as torpedoes, they are perfectly camouflaged for the deep, blue depths of Great Bear Sea, British Columbia, Canada, where they are found. This is one of the most beautiful and elegant fish you can hope to encounter. Shot using the Sony a7S II mirrorless camera

Has your process changed at all since switching to Sony mirrorless cameras? Is shooting easier?
“The place where my photography has been growing thanks to mirrorless is underwater. The low light capabilities of some of the new cameras make it possible to reveal underwater scenes that until now were off limits.”

What has your life’s work taught you about the power of photography?
“For some of us, the natural world is a constant source of awe, joy, wonder and even fear. For creative people, nature is the perfect raw material from which to tell stories. I like making images that allow me to ask questions about story, collective memory, and human narrative. Because we are hard-wired to respond to storytelling, photography and video are the perfect tools to capture the full, complex reality of our experience as humans on this planet.”