The Trauma of Life on Skid Row, in Photos 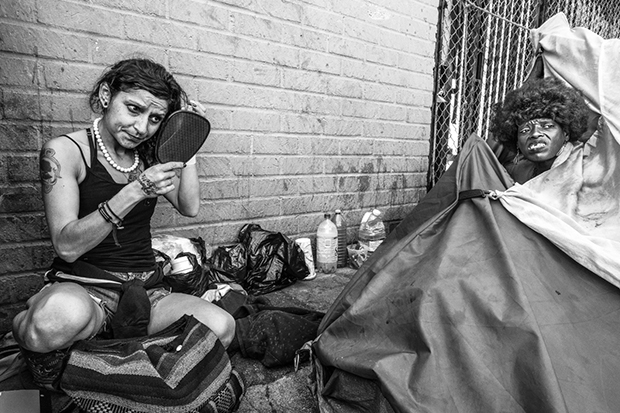 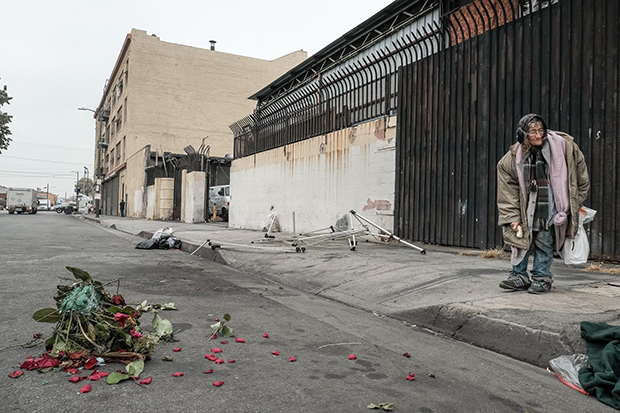 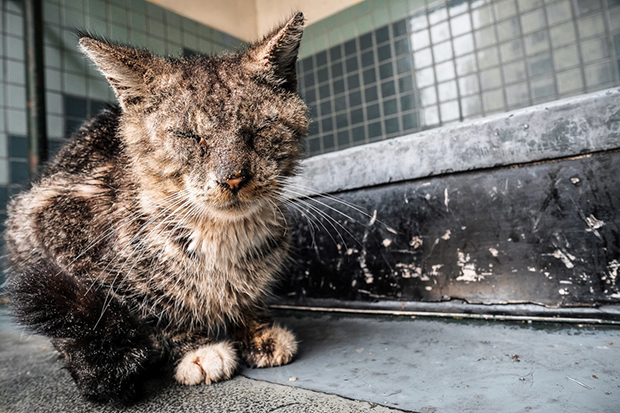 In my mind, it’s a photograph that could not have been made by anyone but Stein. She has been photographing life on Skid Row since the fall of 2015, and in the last year, she has borne witness to the acute suffering of others. She’s heard firsthand from survivors of rape and abuse. She’s befriended people who are addicted to heroin. She’s been in the presence of infections and illness, true life and death situations. And throughout all of it, a fundamental decency and humanity have remained at the heart of all her images.

The photographer returned more than once to the portrait the little cat. It was impossible under the dangerous circumstances for Stein to get the animal to safety, though the memory of the broken creature followed her home.

In the end, the photographer had to delete the cat from Instagram. People were disturbed by the picture, and without anyone to blame for the animal’s trauma, they left hurtful comments directed at the photographer. “I took some heat for my pictures of this girl,” Stein wrote on her blog, “All of the mud-slinging and anger with me was something I don’t feel that I can address. Many times, I don’t tell the whole, grotesquely contorted truth because many people just don’t want to know.”

Last year, I wrote about Stein’s Skid Row photographs, but when our Editor-in-Chief Alison Zavos chose her as a winner of our annual  Feature Shoot Emerging Photography Awards, we wanted to publish this photographer’s story in her own words. I asked her some difficult questions, and she answered them honestly.

“I’m not a perfect messenger, and surely deeply flawed,” the artist wrote at the end of her final blog entry about that poor but well-remembered cat, “But isn’t it worse for these images to remain unseen?” She regrets deleting the picture, and she will post it again someday. As long as suffering remains invisible, it will be allowed to persist. There’s not a lot of beauty to be found on the surface of Stein’s images, but at their core is something beautiful indeed: the enduring hope for a kinder world.

What’s your single most powerful memory from Skid Row?
“It’s hard to choose one. I think I’d choose one from my very last series, with Christine, as I learned about her life and photographed her sitting in squalor as she used heroin. I was intensely focused on my own process in some ways. I was focused on staying in one piece and on trying to express the experience photographically. But I soon realized that the sole reason she was there was because of an abusive childhood. Everything you do and say or don’t say to others- and all of the words you forget about- can destroy someone else for life. Add to that the beatings and the descent of mental illness. Life is beyond unfair for some children, and then they grow up and treat themselves like refuse. Literally.” 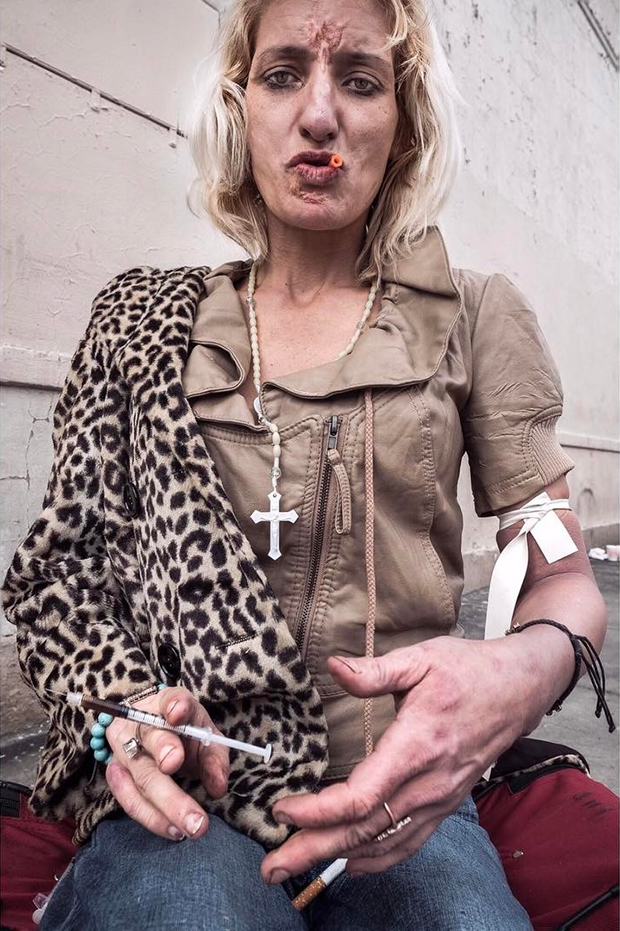 Do you consider the people in your photographs to be your friends?
“Yes, I do consider people friends, with caveats. When drugs are involved to the extent that they are for many people in this environment, there is such a driving need to consider their own personal needs. A friendship with its implied reciprocity wouldn’t be possible unless I was in the same life.

“As an outsider, with clean hands, hair, and the ability to come and go, it’s a relationship without parity of any substantive kind. I think people need to feel equal to one another to feel comfortable opening up without feeling inadequate. That’s critical in a true friendship. Many of these people have abandoned family members and children for complex reasons or because of placing their own needs first. So, yes and no.” 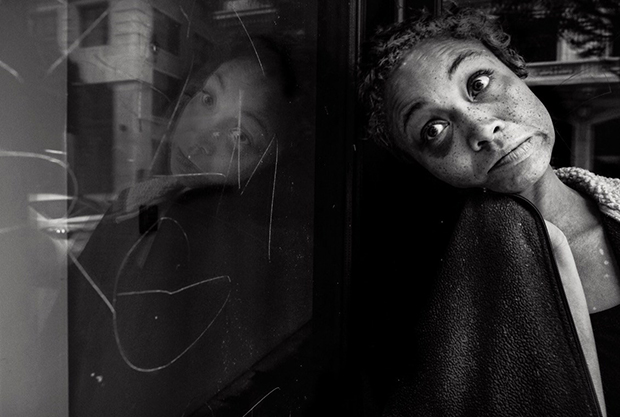 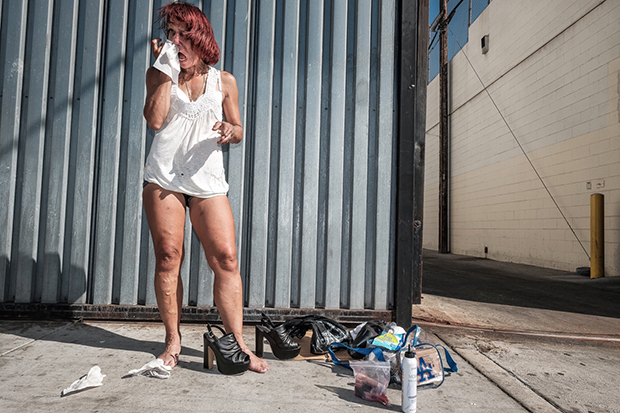 Do the people in your photographs see their pictures before you post them? Do they read your blog ever?
“Some people have seen their pictures. One or two have read my blog. Many don’t have solid internet access. Their phones aren’t usually smartphones. They have the free Obama phones, which are frequently lost or stolen. Some aren’t really interested in their pictures much after I show them in-camera, right after they are taken.

“After my first larger publications, some publications angered me with flip and insensitive text and captions accompanying my pictures. I showed the publications to a few of the women. I needed them to see what had happened. One was unhappy about it, but she was still very happy about the pictures themselves. I learned a lot from this experience.

“I think people are very happy to be noticed, which is why they often share themselves. I’m pretty intense when I’m doing this, so maybe I’m something of a curiosity as well. I think a great deal about the people I’m with, and maybe it makes someone feel good for a brief time. I don’t know, ultimately.” 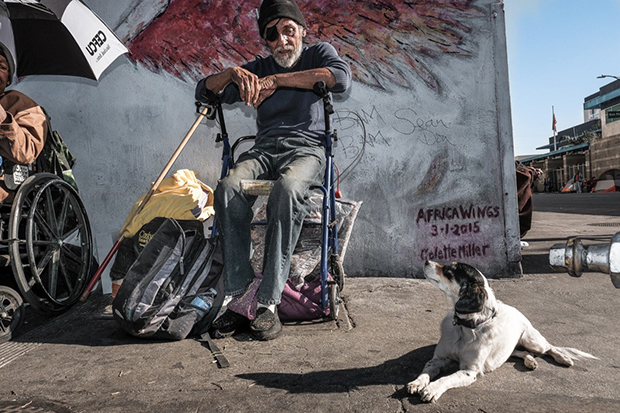 What mistakes, if any, did you make when you first started photographing Skid Row?
“I make mistakes all of the time. The worst ones are when I don’t stay focused and miss aspects of a composition because I moved too fast or was nervous in the environment. I have learned to check and recheck my framing and to look all around so as to minimize missed details and opportunities. You don’t get a second chance.

“I’ve learned to listen more. I can miss a lot because my mind is doing so much at once. I’m thinking about camera settings and the like, so I’ll miss verbal interchanges. I’ve become much more adept at switching focus.

“Being guarded was and still is a big problem for me. People can be very motivated by their own needs, and this can place me at a serious disadvantage if I don’t see it coming. Sometimes I am insensitive. It seems to come with the territory when you are photographing people in dire circumstances. Yes, photographers can be very sensitive; otherwise, they would lack the perspective to conceptualize and express with pictures. But at the same time, it’s an act that requires a degree of callousness that few will admit to.” 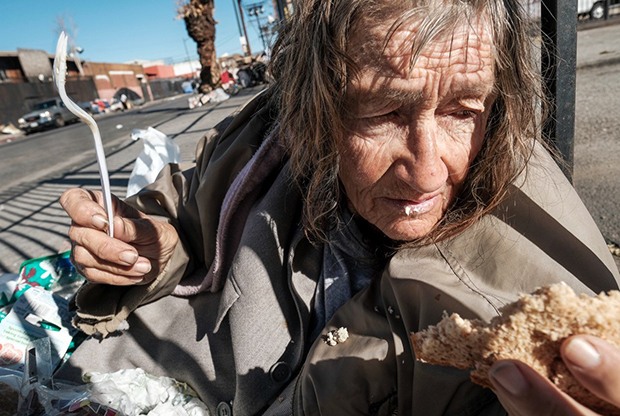 How do you cope with some of the traumas these people have endured? How do you protect yourself emotionally?
“It’s difficult sometimes to know what to say. Sometimes I just listen. Also, many times, when someone who has had many traumatic instances relates a history, there’s a matter-of-fact demeanor that belies the seriousness of the situation. People become numb. They’re so used to serious troubles, and when they speak about what’s going on, it can take on a strange, alternate reality kind of normalcy. The lack of tearful emotion makes it strangely easier for the listener.” 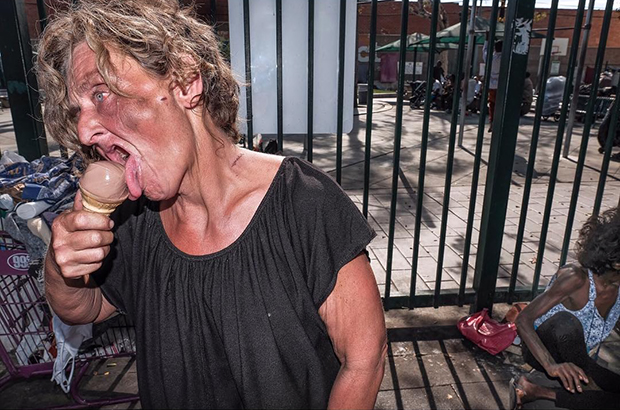 What does the public miss about Skid Row?
“The public doesn’t have any idea how twisted the reality is. I don’t write about much of the truth. I will soon, when I’ve been out of the environment for a longer period.

“The truth is that there is a great deal of enabling behavior by the system. Police don’t really patrol the area the way it desperately cries out to be patrolled. The serious nature of racism that occurs on all sides is a tough one to explain to the politically correct mass mentality. There are some really bad people there, people who have no place in society. And that’s the hard truth. Some people just suck, and there’s not a whole lot that can be done to prevent them from causing tremendous suffering. But that’s true in all places.

“There are people who in no way deserve exile because of mental illness or economic hardship. The mental illness bit really upsets me. I just don’t get why people are left to literally ferment on the street, unable to help themselves because they’ve been cursed with a brain disorder that prevents them from attaining normalcy. I’ve seen many so-called ‘normals’ visit the area for sexual reasons and heard tales of vicious acts perpetrated with impunity by people who could be my neighbors or your own.”

“People can have a core belief that they are better than the people on Skid Row because they have more money, are cleaner, or live in a house instead of a tent. That’s just false. I’ve met many people that I would far rather spend the bulk of my time with than most of the people I’ve met generally from affluent environments.” 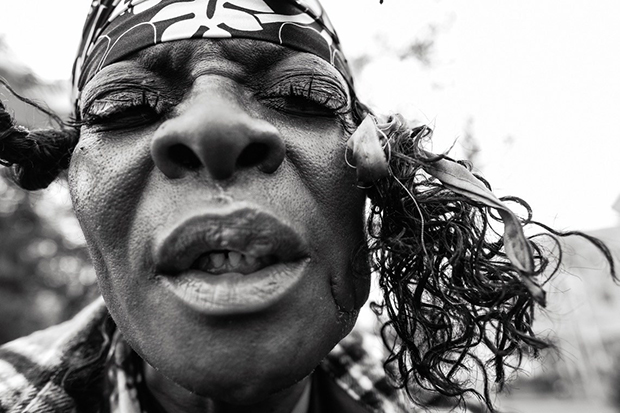 Do you take your work home with you, and have you ever thought about taking a break?
“Yes, it does come home with me sometimes. I went through periods when I had difficulty eating meals. For example, I would eat ice cream for dinner because the smell of something savory reminded me too much of extremely unpleasant garbage smells, which can be common on Skid Row. Other odors and sights sometimes stayed with me and prevented me from eating particular foods.

“I have decided that, for the time being, I’ve finished shooting pictures in Skid Row. For many reasons, the first being that I need a change. Artistic expression for me is somewhat dependent on being stimulated by a changing environment. Personal safety is something I’ve been very, very fortunate to have been blessed with thus far, but a few recent events and realizations have changed how I feel.

“I’m a single parent with a dependent son, and it isn’t fair in some respects to continually jeopardize my safety. This project for me is voluntary. I’m not a police officer or a public utilities worker who must be in the area for work. I became especially sensitive to the reality that people aren’t changing. They have the power to do so, and they continually elect to slide into oblivion.”

Is there also joy here too, though? Have there been moments that give you hope?
“There’s joy in interactions that are humorous. There’s joy in a few people getting clean and in people reporting that they’ve gotten housing. But I don’t see a lot of joy. What I see is religious fervor and zeal replacing emotions that would normally be considered happiness, joy, satiety, contentment. Religion can act as a comfort and, to my senses, act as a blanket that generates positive emotions and a temporary shield from reality.” 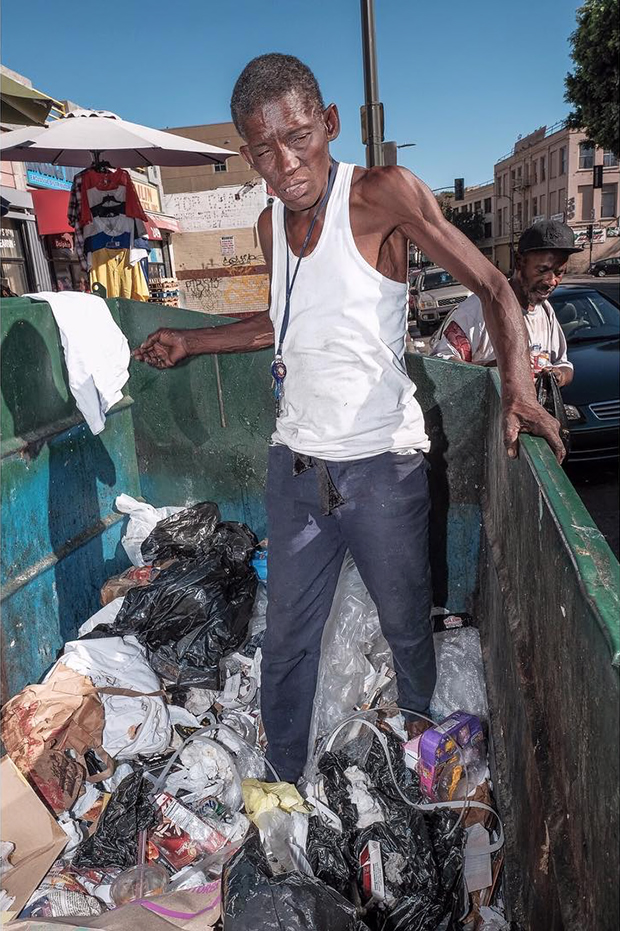 Has Skid Row changed you, as an artist or as a person?
“Yes. I don’t care about what people think of me, or at least I care far, far less than I once did. I don’t care about wearing ‘nice’ clothes as much, and I don’t feel bad that I’m unable to afford expensive ones or drive a great car. What you wear truly doesn’t matter. The quality of your output matters. And what you say and do to others counts, even the little things. I don’t always do the right things, and I’m not always nice, but my sense of balance has definitely been changed for the better.” 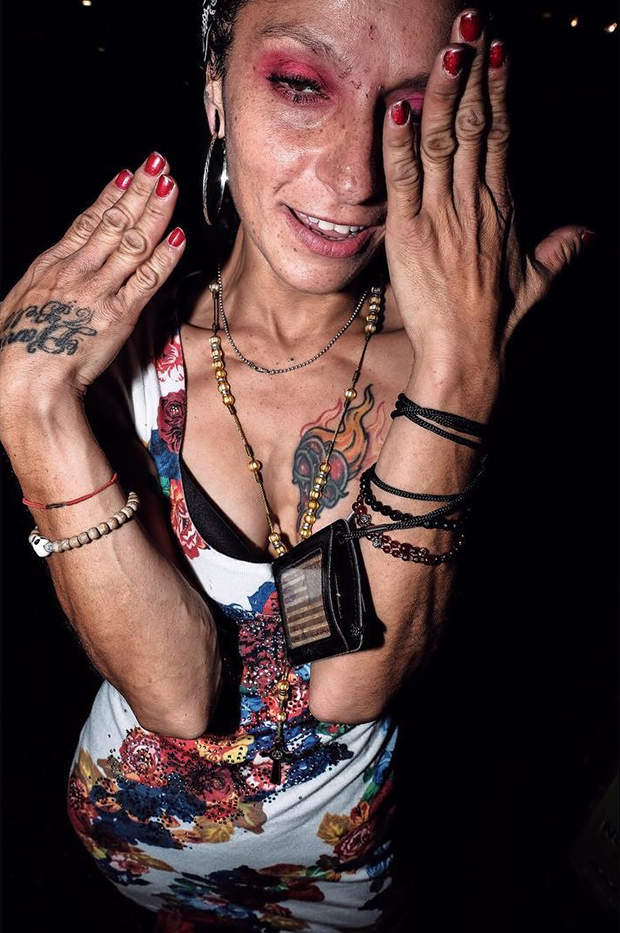 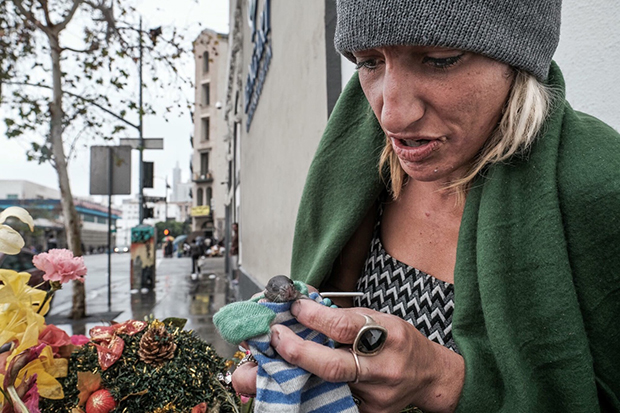 Christine tries to save a drowned newborn rat.