Painful But Unforgettable Portraits of Life on Skid Row 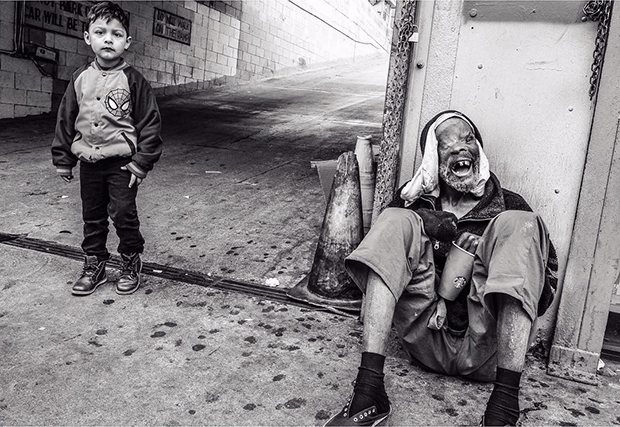 Los Angeles Street near Winston St: Jerry has been on Skid Row for years. Despite his devastating facial injury, caused by a rifle shot to the face as he sat at a bus stop over a decade ago, he’s very easy to talk to and joke with and is very honest about his life. He’s routinely bullied and has his belongings stolen regularly. He’s in very poor condition physically, and I haven’t seen him in months. 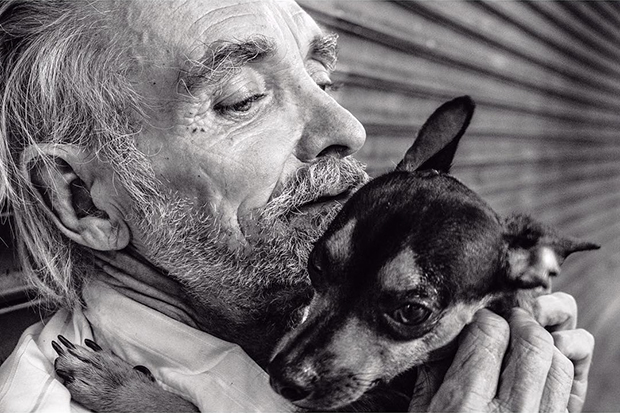 Spring Street between 5th and 6th: Larry first saw Rebel being beaten brutally by his owner on Skid Row around San Pedro Street. He implored the guy to allow him to take the dog, because he knew that the dog wouldn’t survive much longer. He was given the dog, named him Rebel, and they are now inseparable life partners

“Get the fuck out of the car already, because if you don’t, you’ll never forgive yourself,” photographer Suzanne Stein told herself as she passed by Jennifer’s tent on Skid Row. She’d been photographing the faces of the area since October of the previous year, but this block could be unpredictable, and she was frightened. Still, Jennifer was worth the risk.

Over the last year, Stein has forged a close bond with some of the Skid Row residents she visits regularly, and their friendship has acted at times as a protective shield. A woman named Victoria, who has earned the respect of many in the community, has taken up for the photographer, declaring, “She’s my personal photographer” when neighbors question the camera.

Documenting Skid Row has been painful for the photographer, and out of respect for her subjects, she doesn’t sugar-coat any of her experiences. She’s seen friends inject heroin, smoke crack cocaine, and lose touch with reality in the middle of a conversation. She’s heard stories about brutal attacks, rapes, and fights over territory.

For every person who confides in the photographer, there’s another who remains a mystery. There was one woman with a bandaged head she saw once and never got to meet, another she simply called “The Girl with the Red Shoes” until at last she was able to learn her name.

Even the people closest to Stein have things they’d rather keep private. One of her contacts within the community surfaced one day wearing a hospital bracelet; another had a badly infected slash wound cutting through her arm. She’s offered to take more than one to the hospital.

If someone chooses for whatever reason not to be included in a photograph, Stein respects their boundaries, and she’s also built up some of her own. On her blog, where she chronicles her travels, she admits telling herself more than once, “It’s time for me to leave.”

Like the people she’s met in Skid Row, Stein is fiercely honest. In one blog post, she writes, “I’m always relieved on some level that I’m back in my car, and sometimes feel as if I’m covered completely in a thin film of fine grit that adheres to my skin and makes me feel an intense urge to thoroughly wash my hands and face.”

The thing about Skid Row, she says, is that it contains “every imaginable emotion, expressed without reserve.” It leaves her vulnerable, and with every attachment she forms, she understands that it might not last forever.

Stein’s subjects can disappear without notice; some lose their phones and are unreachable. Others are in danger of being physically or sexually assaulted. A few individuals could die from drug use. So while it’s hard for her to keep returning— there have been times she wanted to “forget” things she witnessed— Stein feels the preciousness of every moment she spends on Skid Row.

It’s not uncommon for the photographer to catch “drive-by gawkers” passing through Skid Row, but her pictures reveal what’s true and ordinary here. Yes, there are moments of intense heartache and tragedy, but there’s also some tenderness to be found not in the sensational but in the mundane, in the fleeting encounters and small acts of kindness that unfold between people trying to survive.

Head over to Stein’s blog to read her beautifully and honestly penned stories from Skid Row. You can also follow along on Instagram. 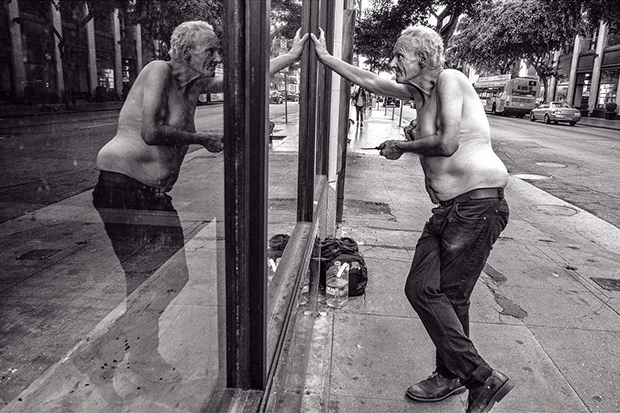 5th Street between Main And Spring: I came upon a man with a knife one afternoon in DTLA near the border of Skid Row. He was angrily staring at his reflection… a moment after this picture was taken, he began to hack at his hair with the knife. 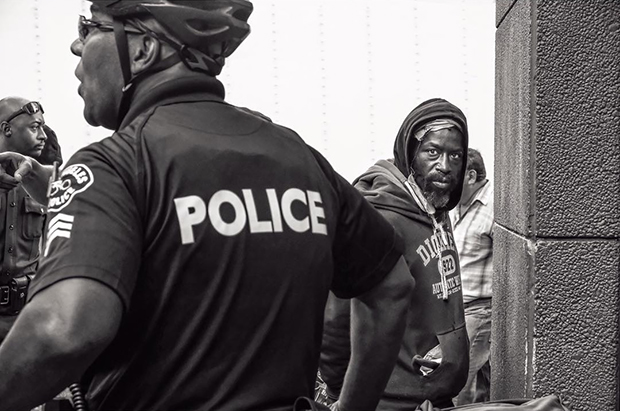 Corner of 7th And Spring Street: This man was being arrested for causing a serious disturbance on the bus which stops at this corner. It was his 2nd police intervention that week for the same issue. I saw him on both occasions, same bus, same female driver, same time of day. 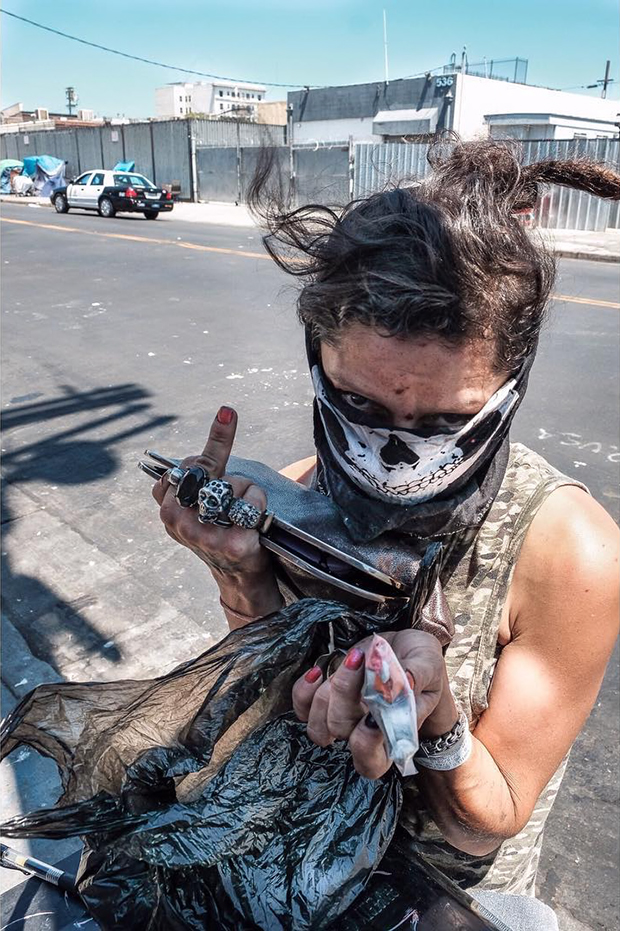 Skid Row, 6th And Towne Avenue: Genevine is homeless, addicted to heroin, and uses her body to support her and her boyfriend. Here, she gestures to express her feelings about the police car in the background. In her left hand, she holds a little party balloon stuffed with heroin, which is how it’s sold. The streets are sometimes littered with these little colorful balloons, along with spent syringes. 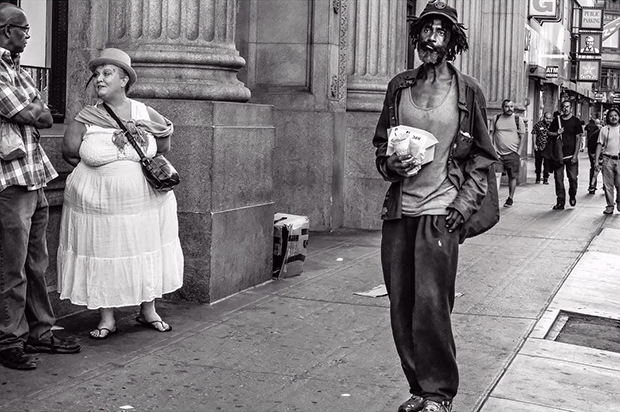 7th Street between Spring And Broadway: I spotted the woman in white, who had a great presence and smile, and the man walking toward me is someone I’ve photographed on the street before. 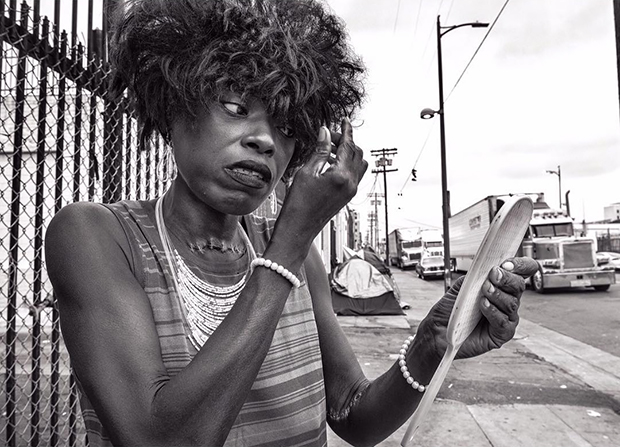 Skid Row, 6th And Towne Avenue: I spotted Jennifer one morning, holding a mirror and gazing at herself as she adjusted her wig on a particularly difficult block in Skid Row. This activity was in sharp contrast with her surroundings and so I stopped, and asked her if I could photograph her. She had been the recent victim of a serious knife attack, which left her with a profoundly deep and stapled wound that extended from the base of her neck, down the left side of her torso and into her left arm. I’ve since gotten to know her much better, and she has a gentle, polite and ladylike presence despite her surroundings and activities. I don’t know if she’s an addict, although I strongly suspect that she is using drugs. She supports herself by using her body and has a debilitating mental illness that is causing visible and accelerating deterioration. 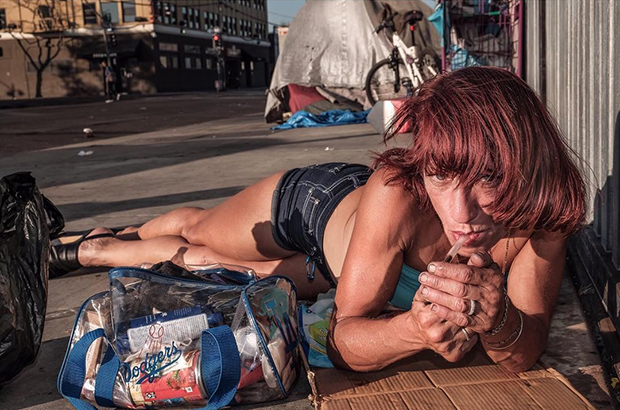 Skid Row, Towne Avenue At 5th Street: Doreen is addicted to crack, pictured here smoking, and supports herself and her habit in any way she can. She is also a veteran firefighter who has battled many California wildfires, trained to fight fire while incarcerated. She is a person with many capabilities, strengths, and a very kind heart but who has wound up on Skid Row, and is unable at this time to leave her addiction and lifestyle, which is destroying her. 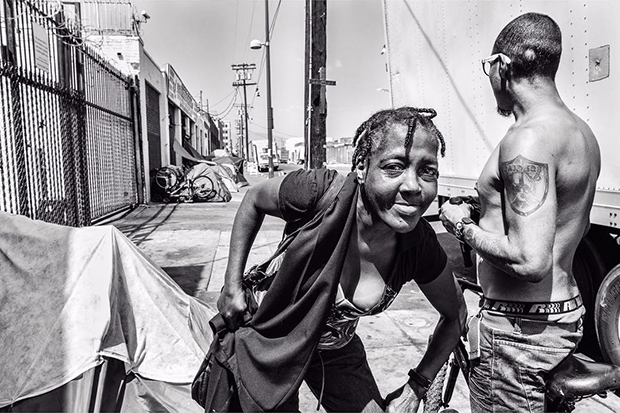 Skid Row, Towne Avenue At 6th Street: Sharon stops by to say “hi,” looking for substances to purchase. She’s very genial and also very high on something that caused her to wobble unsteadily, altered her speech patterns and caused her to partially disrobe. 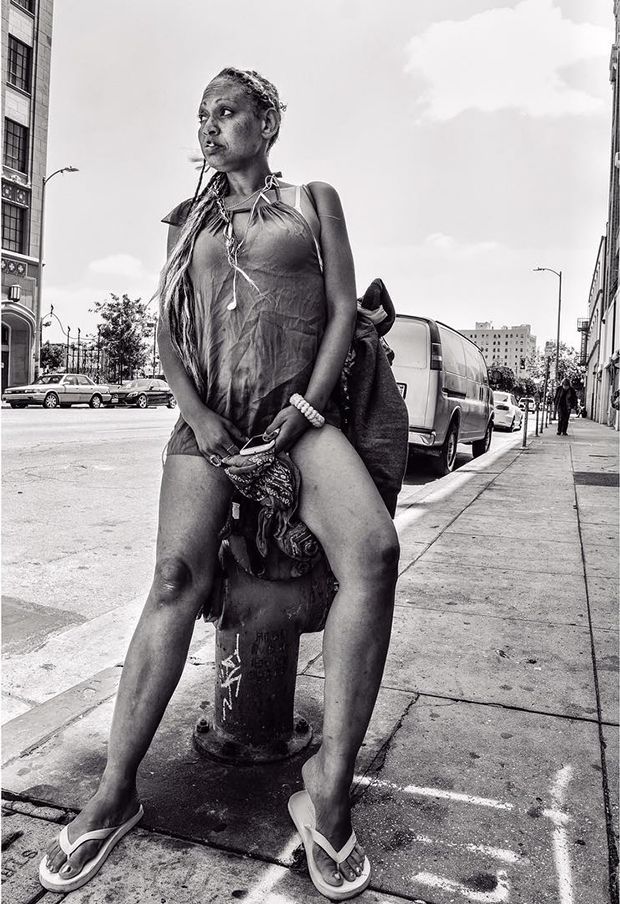 Skid Row, San Pedro Between 5th And 4th Street: Victoria is pictured smoking a small, wrapped crack pipe, disguised as a rolled cigarette. She is also an addict, and is very honest and clear about who and what she is and does. She too supports herself and her habit in the usual way for female addicts. She has a beauty and effervescence that endears her to many, and is very charismatic. She has a large measure of power in the neighborhood and has great power over others on Skid Row. 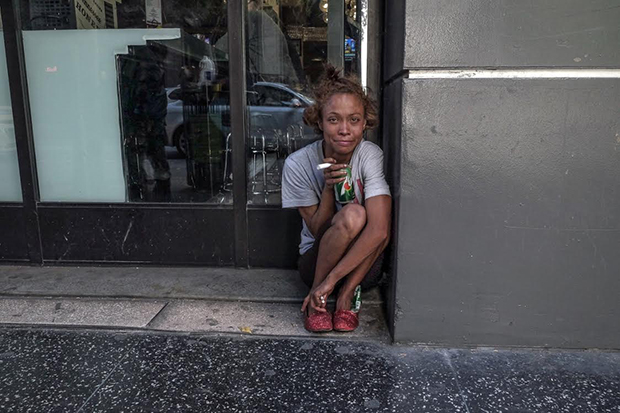 5th Street near Spring St: This is India, I learned months later. She’s a delicately built young woman that wanders through Skid Row sometimes in an anguished state. After this picture was taken, she began a series of jerks and tics coupled with loud giggles and laughter. 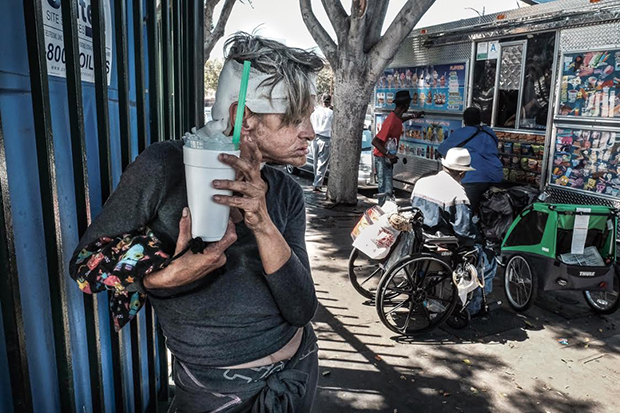 Skid Row, 6th And Gladys Avenue: This spot is in the heart of Skid Row, next to Gladys Park, and characterized by diverse activities that include AA meetings, basketball games, dominoes, loud arguments, drug dealing and using, and the famous Hippie Kitchen, serving free meals and respite for many years. The woman pictured I don’t know, and am always on the lookout for. She holds a prized cup of ice… this was a blisteringly hot day in Los Angeles