A glimpse into the little-known world of ski in Iran 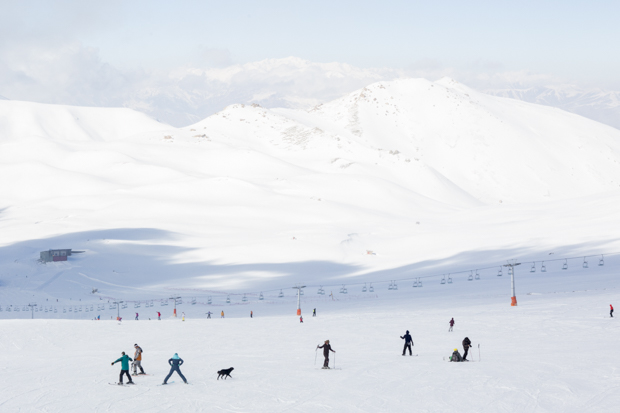 Scattered skiers and a dog are photographed at the Tochal resort in the Alborz Mountains north of Tehran. Iran. December 29, 2014 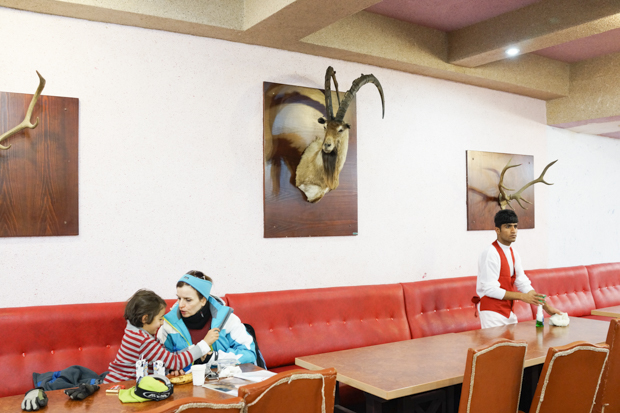 Clients and a worker are photographed in the restaurant of a chalet in Tochal, Alborz Mountains, North of Tehran. December 29, 2014

The clichéd image of the Middle East brings to mind an arid desert and dry heat. It does not include snowy mountains, but they do exist in this region, and skiing is a common pastime in Lebanon, Turkey, Israel and Iran. Milanese photographer Gaia Squarci—who has skied from a young age in the European Alps—headed to ski locations just North of Iran’s capital with writer Laurence Cornet, who introduced her to the scene. On the slopes, in the hotels, restaurants and surrounding facilities, the artist recognised a microcosm that offers the viewer a glimpse into Iranian society—“ski became for us a way to get a little closer to understanding some of its dynamics” she writes. Her resulting series Ski in Iran offers the viewer a window onto this microcosm. 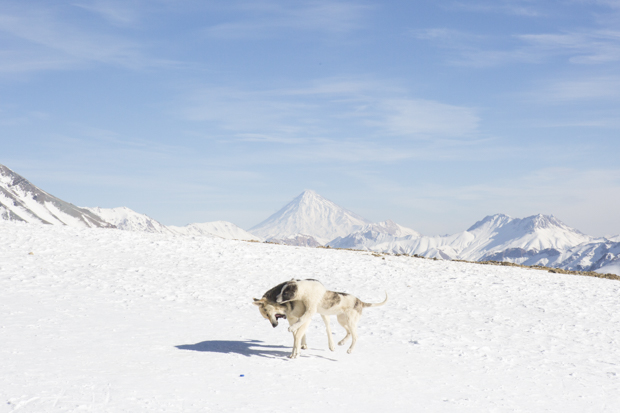 Wild dogs fight on the slopes of Darbandsar in front of Mount Damavand, the highest volcano in Asia, a national pride that takes on a prominent role in Zoroastrian mythology. Alborz Mountains, North of Tehran. January 03, 2015 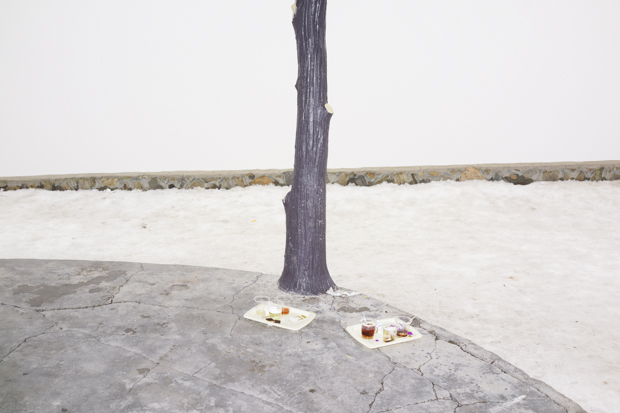 The leftovers of an afternoon tea are photographed at a midway station of the of 45 minute-long gondola lift in Tochal, Alborz Mountains, North of Tehran. December 29, 2014

How different is skiing in Iran to skiing elsewhere?
“When I was little I used to ski in the Alps, where valleys are narrower than in Iran, and densely punctuated by resorts. Ski in Iran is not a novelty, as it was introduced into the country under the Shah. In the context of the Shah’s fall and the many radical changes brought be the Revolution, ski was not wiped out but its development was slowed down, as it is still perceived as a western importation. When you’re high up in one of these locations you rarely see any constructions or facilities except the one you’re using at that moment, and the eye can travel far on the white mountains all around. The structures of the facilities are sometimes shipped there from Europe after being dismissed, so they look quite old-school. It felt to me like traveling about twenty years back. The grasp of the regime is a little less tight in these locations than in the city, but there are different kinds of police in uniform and plain clothes strolling around. Rules are not radically different from the ones one would follow in the west, but there are additional restrictions for women.

The ski jackets are required to be longer, they cover about half of their tights, and women’s heads need to be covered, even though hats are more numerous than veils and there’s a little more freedom for locks of hair to break free.

As Laurence quickly noticed, the ski pass itself reminds you that clients are expected to behave according to the principles of the Islamic Law.

One main difference from my usual experiences of ski resorts is that nights in public places were early, and very quiet. No alcohol can be served in bars and restaurants, and dancing in public is forbidden in Iran so, like in many other contexts in the country, life unfolds behind closed doors.” 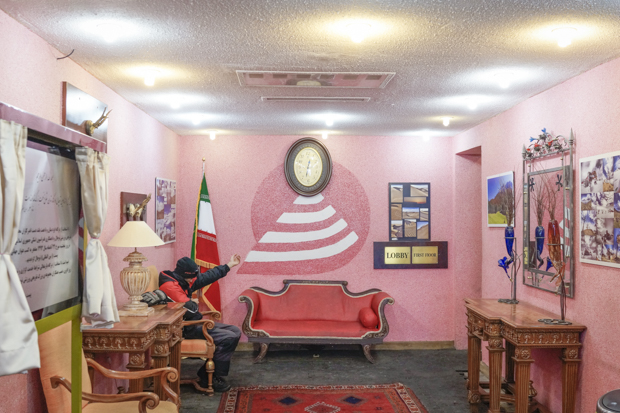 A skier is photographed in the hall of a hotel in Tochal, Alborz Mountains, North of Tehran. December 29, 2014

What did you observe on the slopes?
“We encountered Iranian expats who work or study abroad and come back for the holidays, local youngsters, conservative families who go to the mountain to walk or take a break from the chaos of Tehran, and a few European tourist. One Iranian girl we talked to for instance studied economics in Los Angeles, two brothers from Northern Europe were there to follow their passion for snow sports and a few other foreigners were combining the winter leisure with a visit to an Iranian friend. Laurence was also in contact with a group of Swiss skiers and snowboarders who founded an organization called “We Ride in Iran” to teach freestyle to the locals.

A range of different lifestyles coexist on the slopes, and spending time there can definitely fragment any monolithic idea about Iranian society. We kept in mind though that the ski scene in Iran, like everywhere else in the world, automatically excludes part of the local population, due to the expenses linked to the sport itself. The prices of rentals and ski pass are lower than the European ones, but in proportion they’re still quite expensive for Iranians.”

Where exactly can you ski in Iran and what are the slopes like?
“There are a few resorts in other areas of the country. We focused on the ones not far from Tehran, and it was striking for me to notice the contrast between those beautiful natural landscapes and the frenzy, pollution and madly congested traffic of the city close-by.

The resorts are all two-hours-or-less far from Tehran, and the closest one is Tochal. You can get there by a 45-minute-long gondola ride, leaving from a recreational area in the northern part of the city. Tochal is a small resort compared to others, but it is so high that visitors sometimes feel sick because of the altitude. Among the locations we visited there are Dizin, which is the meeting point of a younger crowd of snowboarders and freestylers, and Darbandsar, from where you can see Mount Damavand, the highest volcano in Asia.

We would have loved to visit Shemshak, another popular spot not far from Darbandsar, where apparently you can meet the emus from a nearby farm hanging out on the slopes, but we couldn’t get there at the time, as the road was interrupted because of the snow.” 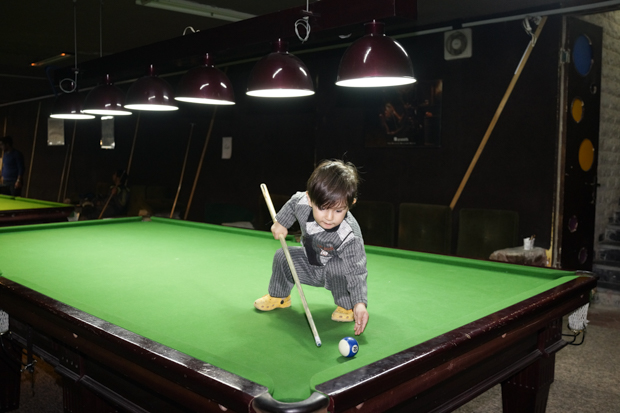 A child plays on a pool table in the basement of a hotel in Dizin. Alborz Mountains north of Tehran. Iran. December 31, 2014

Did you have a preconceived idea concerning how you wanted these images to look?
“Not at all, and I rarely do. Moreover, it was the first time for me in Iran. I didn’t know how I would have felt about the place or the relationship with people, so I went in, let’s say, candid.

In terms of aesthetics though, what immediately captured my attention was the vintage interior design of the chalets, displaying colors, materials and geometries that threw me right back into a 70’s-inspired endearingly kitsch paradise. It was fun to make this aspect part of the story, as this colorful atmosphere felt to me in contrast with the mood of austerity that the idea of Iran usually inspires.” 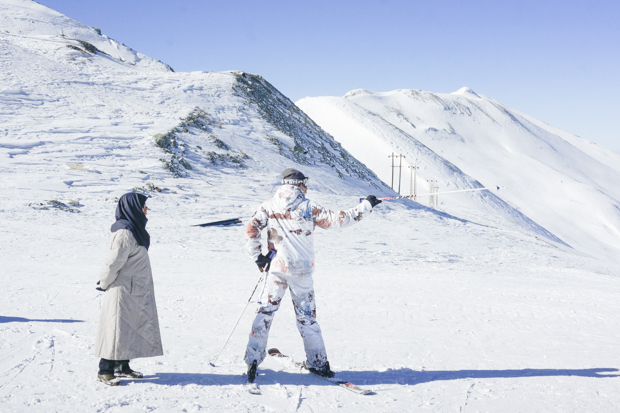 A man points to his mother the slopes where he will be skiing in Tochal, Alborz Mountains, North of Tehran. January 06, 2015

What’s next?
“In the last two years I started working on a series of stories about volcanoes and the way mankind relates to them. I think the terms of this relationship can be considered on one hand universal, related to the awe of human beings in front of nature’s strength, and on the other very specific to each culture, and to the kind of activity of a single volcano.

Eruptions are associated at once with destruction and fertility, they “made” earth as we know it, but the barren volcanic ground often reminds us of other planets. Volcanoes are the stronghold of scientists and legends, shamans and UFOs. As I see it they all have something to say about us and the way we perceive ourselves in connection to our planet.” 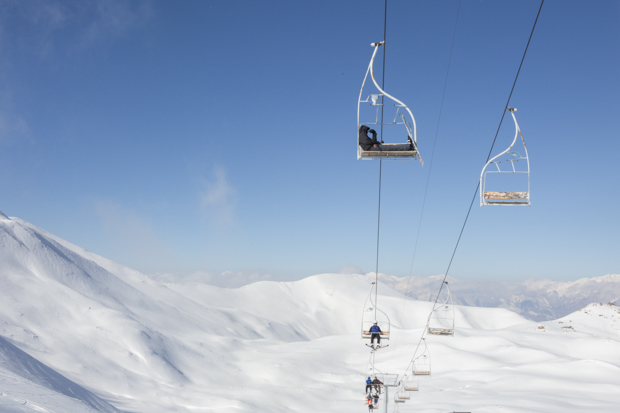 Skiers go back up Tochal’s slope on a chair lift. Alborz Mountains, North of Tehran. December 29, 2014