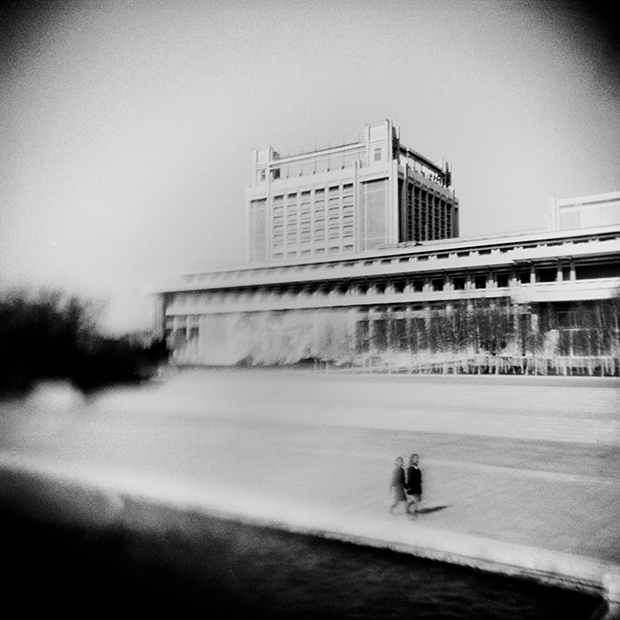 Aaron Joel Santos: There’s something almost upsettingly benign about traveling in North Korea. It feels set up, like a stage in some very elaborate school play. The costumes and actors and lines and directions are all there, laid out for the people you come across. It’s a Ghost World, there through the fog of a window pane. Hidden behind several layers so you can barely make out what it is you’re looking at. It’s mysterious, of course, but it also plays into its own mysteries perfectly.

It’s almost as if, at times, it knows what travelers want out of it, and it obliges. It’s a strange place, and maybe all the more so because we can’t seem to get a grasp on it. It’s a slippery country. At times brutal and frightening and utterly evil, and in other instances, almost hokey and kitsch. But always with a kind of looming terror. Which is why I photographed it the way I did. Lost in that fog. Trying to depict this idea of ghosts haunting a city. A certain myopia and strangeness, something that couldn’t be quite seen or grasped or believed.

The United States government has a list, updated frequently to include all travel warnings to civilians, advising them on precarious situations in locations around the world. Some countries stay on the list for the blink of an eye; others remain for years. While the government cannot of course forbid us from visiting these countries, the list uses no uncertain terms: “We want you to know the risks of traveling to these places and to strongly consider not going to them at all.”

As of this writing, there are thirty-seven places on the Travel Warnings List. Reasons for issuing a warning range from civil war to limited protection by the US government. The Mali warning makes mention of recent terrorist attacks and criminal activity, and some of the remote areas of Algeria are also listed for potential terrorism and kidnappings.

The Iran Travel Warning cites religious tensions, unfair arrests, and “various elements in Iran that remain hostile to the United States.” Americans are warned against visiting parts of Tunisia along the border with Libya due to fear of terrorism. According to the list, North Korea poses a “serious risk of arrest and long-term detention under North Korea’s system of law enforcement, which imposes unduly harsh sentences, including for actions that in the United States would not be considered crimes.”

Although the government is quick to point out that “tens of thousands of U.S. citizens safely visit Colombia each year for tourism, business, university studies, and volunteer work,” it still makes the list because of crime-related violence. Armed robberies are mentioned in association with Venezuela.

Every one of these countries has a history that goes well beyond a number on the list. We wanted to ask some of our favorite Offset photographers who have spent time in these places to tell us their stories, candid tales about personal experiences. Their memories are their own and no one else’s, and they should by no means be understood to represent something general or universal, but they do illuminate sides of these countries that otherwise would remain invisible.

Yes, some of these stories are scary, but others are breathtakingly beautiful. None are what we expected. 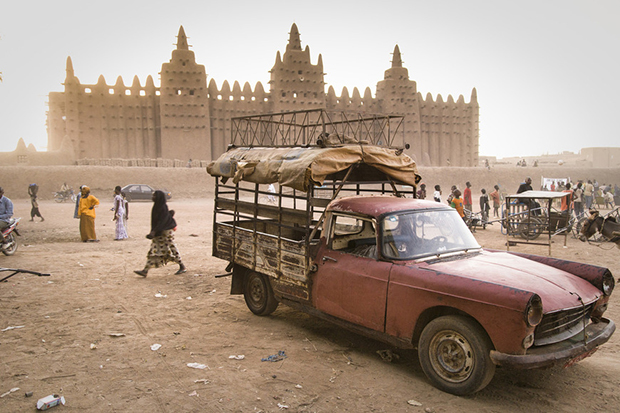 Brian Hodges: With little advance preparation, and no real plan other than explore the country, I traveled to Mali with my wife and three children. Although this was our first trip to sub-Saharan Africa, all of us are well-traveled and fluent in French. We arrived shortly before the Tuareg rebellion, but we encountered absolutely no problems. Having traveled to more than 60 countries, I’ve come to discover that in developing regions, the best travel plan is often to have no plan. This sounds counterintuitive, but as a photographer, has always served me well. Of course, we allowed ourselves the time to get lost, and lacking clear objectives, it is hard to be disappointed. Rather than lock down a specific itinerary, I prefer to have the flexibility to adjust plans according to the weather, the people I might meet along the way, or evolving political situations. 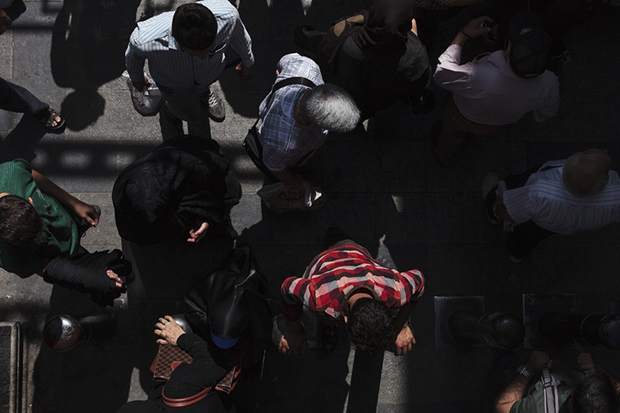 Marco Barbieri: I travelled to Iran by myself to do a photography project on the so called Islamic Republic in 2014. Iran is a wonderful country, populated by the most welcoming people I have ever met. I found myself at ease in Iran from the first moment I landed. The Police officer at the Imam Khomeini airport in Tehran greeted me saying, “Ciao bambino” as soon as he realized I am Italian. The formalities took me less than when I traveled to New York from London.

From that moment, I spent my time being greeted by people on the road thanking me for the fact I was there. People would offer me food, tea, and they would insist to pay for my taxi ride. It would usually take less than a minute stopping with my map open for someone to turn and bring me where I needed to go. I had an imam opening an area of a mosque that was closed to the public for me, showing me different versions of the Quran. Another imam gave me a ride on his car and showed me around Madrasa Kashan. People at a famous mausoleum in Shiraz, only accessible to muslims, invited me in as the most welcomed guest. I even ended up being a guest in someone’s house who took me around the city of Isfahan at night to see people singing under the Khaju Bridge.

The experience was so overwhelming that the only time I was actually stopped by someone professing himself as an undercover agent of the Islamic Revolutionary Guards, I felt so confident about the fact that nothing could happen to me that I was completely at ease. 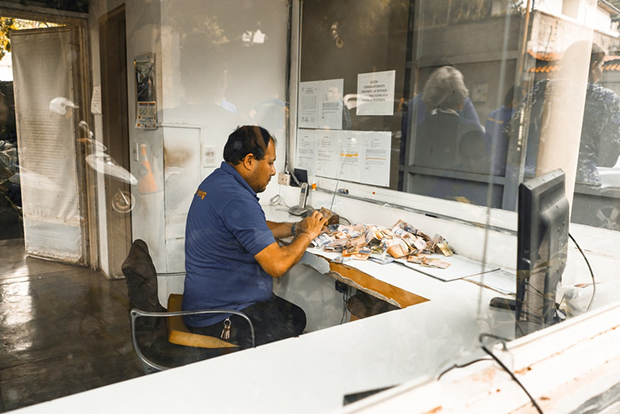 Man counting a pile of money on his desk, Venezuela © Iggy Smalls / Offset

Iggy Smalls: I keep on returning to Caracas, Venezuela. The first trip was in 2013 – the week President Chavez died – and then sporadically over the next couple of years. Back then, the social and political situation was highly polarized, but now it is worse. The street is tense and the people tired.

“Bring your own necessities,” they say.

As a foreigner, I cannot get any of the products that are rationed out by the state – products like meat, toilet paper, flour and sanitary pads. Anyone will have difficulty finding shower soap in any shops. Or condoms. Or car parts. Everywhere in Caracas, I saw the same signs over and over again: “no hay [insert food/necessity here].” Medicine is impossibly expensive and hard to find. The black market flourishes, while the lines to the store keep getting longer. I get sick every time I go there, and this last time was no different. So that personal stock of imported medicine and toilet paper was dearly needed in the end. 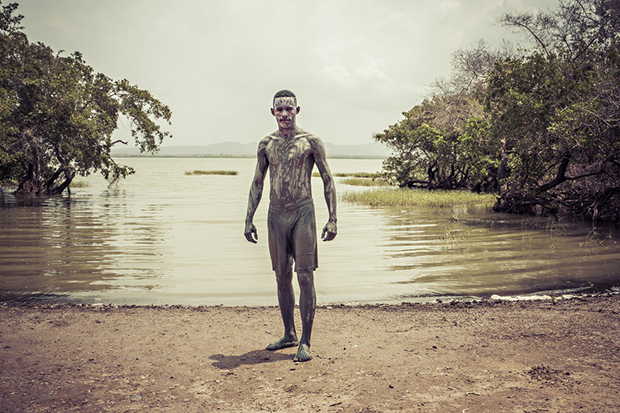 Scott Witter: When I travel, one of my main goals is to seek out intriguing people to photograph in their local surroundings. The locals I met in Colombia were more than happy to pose for a frame or two (or ten), like this young man I befriended at the Volcano del Totumo, a mud volcano just outside of Cartagena. Like other South American countries I’ve visited, the people are warm and generous, making me feel like part of the family rather than a tourist with a camera. 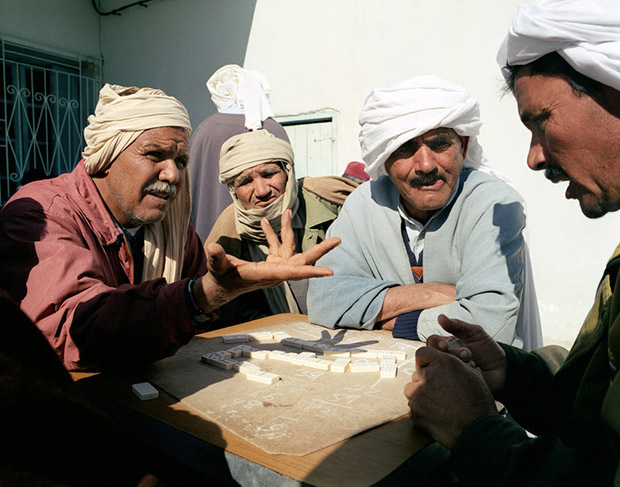 “One never took the time to savor the details; one said: another day, but always with the hidden knowledge that each day was unique and final, that there never would be a return, another time.”
– Paul Bowles, The Sheltering Sky

Matthew Wakem: It was this quote from Paul Bowles’s The Sheltering Sky that inspired me to quit my day job working at a magazine in New York City so that I could “savor the details” of the Sahara desert in Tunisia and Morocco. Taking the night train from Tunis to Douz, Tunisia was like stepping off into a far-off galaxy. It was no wonder that George Lucas chose to film much of the first Star Wars films here. I spent two months photographing and just taking it all in— from the hookah lounges of Tunis to the vast desert landscapes to the southern palmeries. This particular photograph was taken in the town of Douz at the Café Republique. These men were having their morning coffee while playing dominoes, arguing, laughing and joking with each other, much as they had done time and time again. 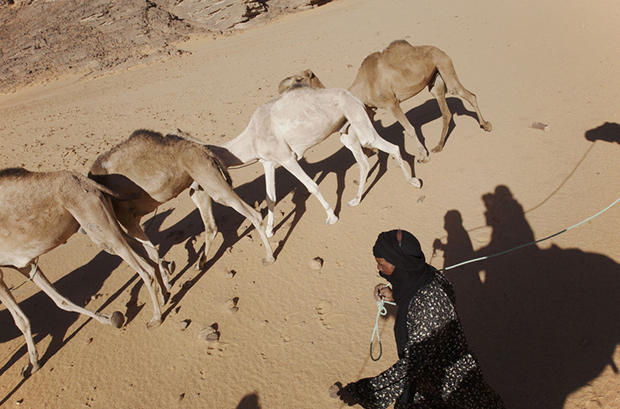 Mirjam Bleeker: A few years ago, we went to the desert of Algeria to do a camel trek, which started in the white-washed oasis town of Djanet. A dream come true. Five days with camels, a cook, a guide, and a camel caretaker, wandering through Tassili’s intoxicating landscape of palm-groves, wadis, and dunes. Walking the whole day in the silence of the desert and sleeping under the Saharan stars made for one of most beautiful trips I ever took. The sun wakes you up in the morning, and then you have typical Tuareg morning tea. I was in nature for days, seeing nobody except a few of Tassili’s Tuareg nomads passing by on their camels. We went through sand dunes and huge cliffs. There was always this beautiful light.