The Devastating Reality of People Living in Waste 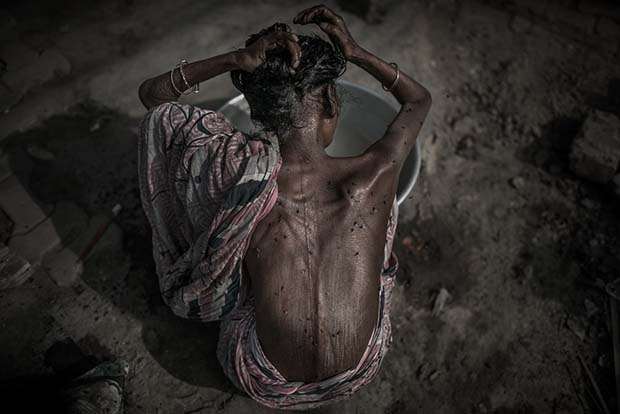 An old woman is washing her hair, with flies all over her body, at Dhapa waste dumping ground, Kolkata, India. 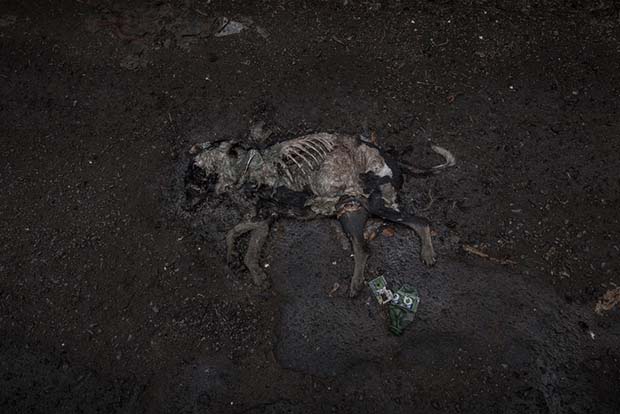 One of many dead dogs found dumped openly on the road in the Dhapa waste dumping ground, Kolkata, India.

For photojournalist Turjoy Chowdhury, Dhapa started off as an anonymous brown spot on the map of Kolkata.

“The first time I visited the place, I remember that from the distance I saw something like a mountain at the horizon,” he says, “It was almost eight to ten stories high.” As he drew nearer, the mountain became a massive pile of trash, over sixty acres of waste onto which 5,372 tons of garbage is dumped daily.

Amongst the trash, he found the people of Dhapa, who live outside of mainstream society in what Chowdhury describes as a waking nightmare. The thousands of families in this community live from one day to the next by sorting the garbage or laboring in recycling factories.

Many of the people the photographer met in Dhapa were climate refugees, forced from house and home by catastrophic disasters. Their new homes are quite literally set behind the mountain of waste from the city, and disease is common due to the unsanitary conditions. During his first visits, Chowdhury had to cover his nose and mouth to avoid spells of nausea.

Gaining intimate access was difficult. The people of Dhapa have experienced little kindness or recognition from outsiders, and authorities discouraged the photographer from visiting. On a few occasions, he was told to leave or to delete his photographs.

Still, Chowdhury refused to give up on Dhapa: “I kept going back again and again.”

In the beginning, the photographer suggests, Dhapa was just another subject to be recorded from a distance, but it became personal when he was addressed by a man in the community, who asked, “What have you civilized people given us except for this mountain of garbage?”

“The man was right,” Chowdhury admits, “But I had nothing to give them except for the photos I took of them.”

He returned to the people he met, bearing their portraits as gifts. He recorded them on video.

Over time, the photographer earned the confidence of the community. The children, in particular, ran out to greet him when he arrived in the afternoons. They showed him their prized possessions, found in the trash.

“It’s more like a treasure hunt for them,” Chowdhury explains, “Whatever they find and like, they keep it with them.” The adults too warmed up to the photographer. They fed him meals, and the same individuals who once covered their faces from the camera began smiling when he showed up.

It took two years to establish a mutual sense of trust, and Chowdhury believes the only reason the people of Dhapa gave him so much is because he gave them something of himself in return.

When asked about what can be done to help, Chowdhury says the community faces an uphill battle with stigma and cruelty. One woman told him, “Most of the people from the civil society don’t care about us, they always maintain a huge distance by saying, ‘these are dirty people from a dirty place.’” She went on to say, “They don’t even consider us human beings.”

Her words motivated him to cut through the prejudice to reveal the dignity and humanity of the people society forgot. It’s waste from the city, from the so-called “civilized population” that has put this community in peril, and the bitter irony of that isn’t lost on the photographer. As fellow human beings, we’re all complicit.

The first step towards change is pulling back the veil and asking the public to confront painful realities. Chowdhury hopes his pictures can be the link between the people of Dhapa and the outside world. Once the people are seen, he believes, they will also be heard.

Readers can make donations to the project by contacting the photographer via his website. The full Life in Waste series, still ongoing, can be viewed here. Footage and interviews with the residents of Dhapa can be seen here. 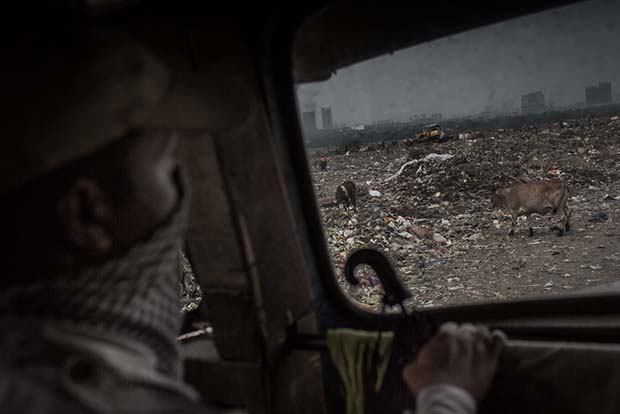 A guard is observing the waste dumping ground while sitting inside a waste carrying truck at Dhapa, Kolkata, India. 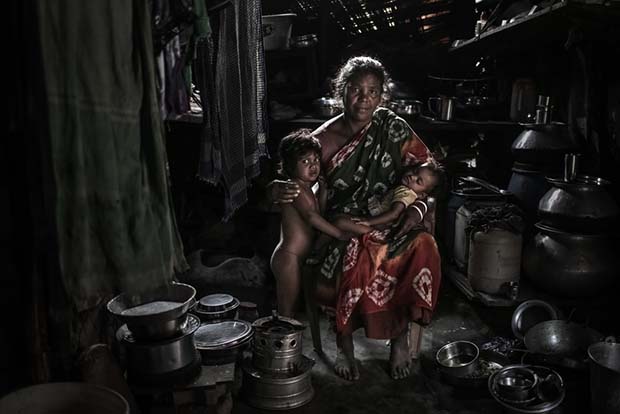 Droupodi Mandol takes care of her two grandchildren when their mother works in Dhapa, Kolkata, India. These children have no birth certificate in spite of applying several times. 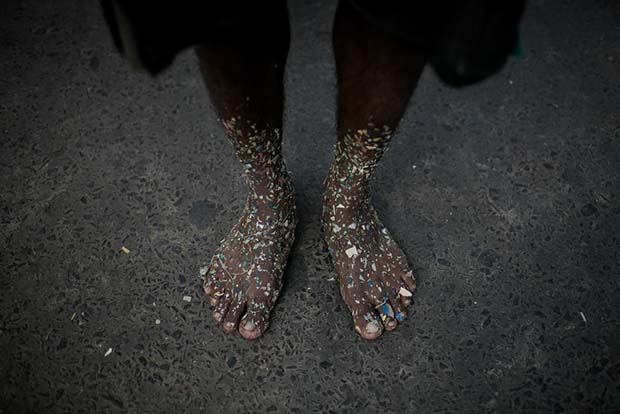 A worker who sorts out plastic in a plastic factory got his feet covered with plastics at the Dhapa waste dumping ground in Kolkata, India. 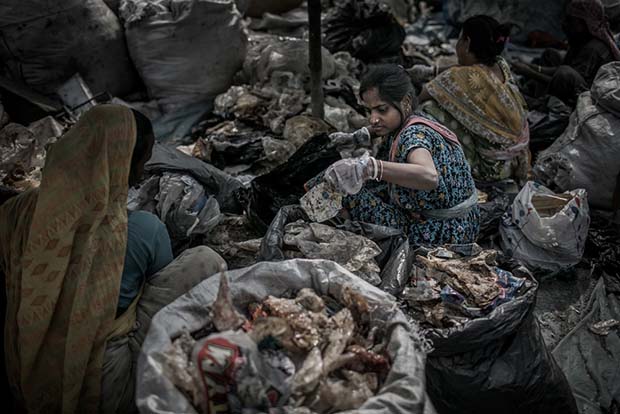 Women are sorting out the plastic bags at the Dhapa waste dumping ground in Kolkata, India. 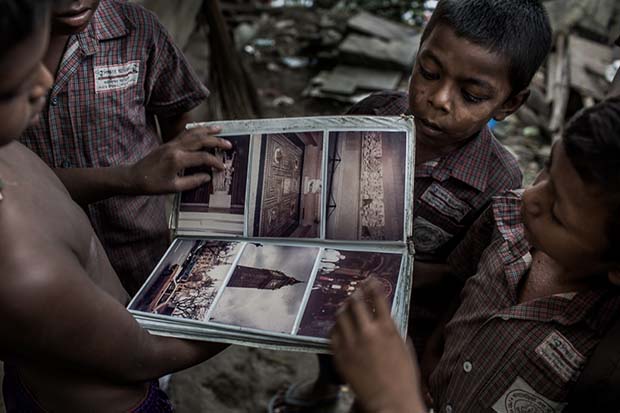 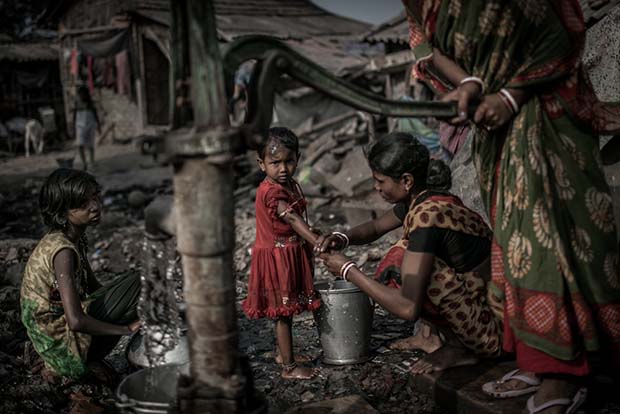 A woman is washing her daughter’s hand while another woman is collecting water from a tube-well in Dhapa, Kolkata, India. 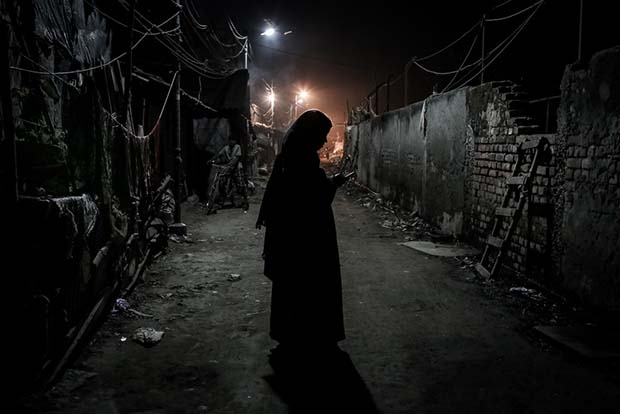 Purnima is searching for a mobile network in Dhapa, Kolkata, India. Because of the mountain of waste, they don’t get a proper network connection except for some particular places. 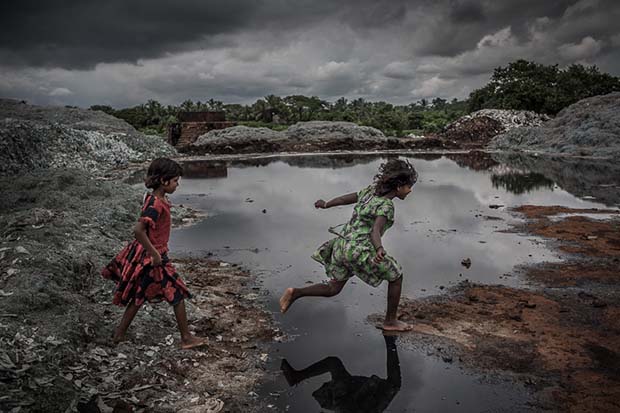 Kids are jumping over the black water of a tannery in Dhapa, Kolkata, India.