Eerie Portraits of Pro-Life Protesters Outside a Planned Parenthood 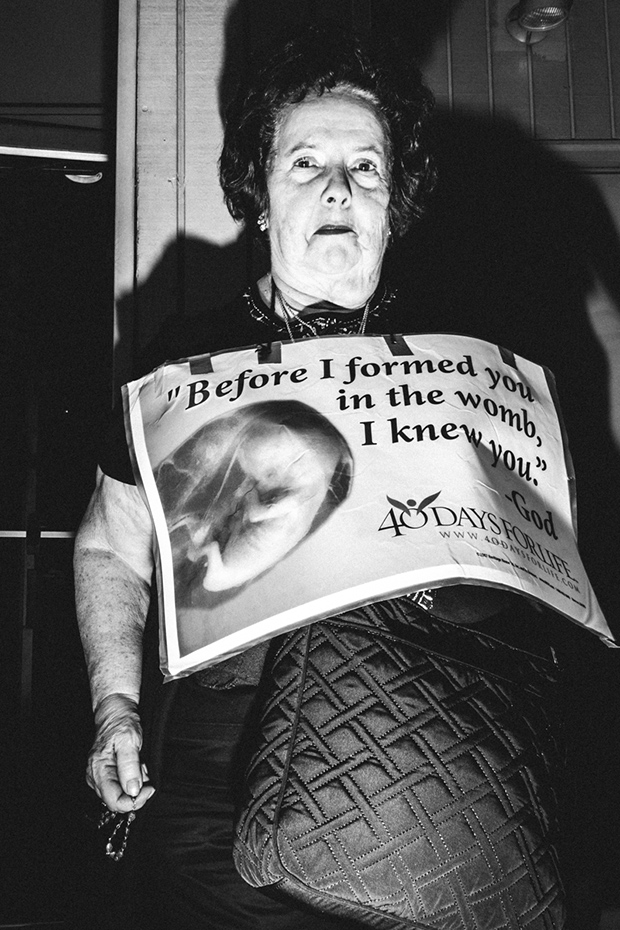 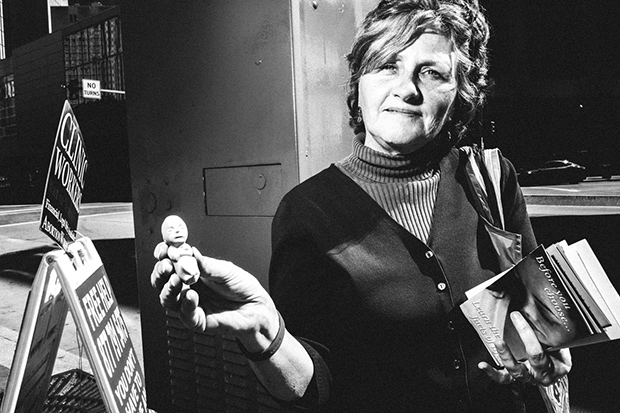 A few months ago, a woman in Pittsburgh asked her boyfriend to accompany her to her appointment at Planned Parenthood. When she had gone previously, she confided, she had been accosted by a group of protestors who wrongly presumed she was going to get an abortion. She had in fact been going for routine medical care, but the incident stayed with her and left her rattled.

That woman’s boyfriend is street photographer Robert Lee Bailey, and after their visit to Planned Parenthood, a 40 Days for Life Campaign came to their city. Protestors rallied together outside of the clinic for twelve hours daily, praying and letting their views be known.

Over the course of the weeks-long event, Bailey returned multiple times a day with his camera to scrutinize the anti-choice activists as they scrutinized the women entering the building. His intention, he suggests, was to flip the script. As they trespassed into the private lives of passing women, he encroached upon them.

He approached them without introduction and without permission, illuminating their faces from up close with a flash. Many hid their faces; some got angry; others engaged him in friendly banter. Although he certainly intruded upon his subjects’ personal space, he thanked every one of them after the shutter fell.

Only weeks after these pictures were taken, reports Bailey, a Planned Parenthood clinic in Colorado Springs was attacked. A gunman killed three people and injured nine others. To this day, Bailey still has a reminder from his time at the protests: a tiny fetus made of rubber. His cat likes to play with it.

We asked Bailey to tell us more about the project. 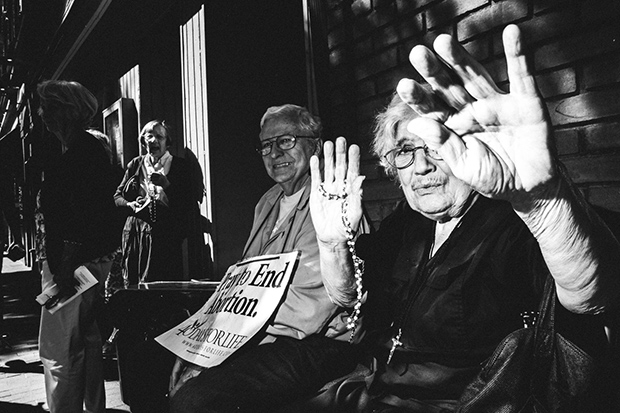 Tell us a bit about what was going on politically when you made these images. What headlines motivated you to embark on this project?
“The heavily edited Center for Medical Progress’s undercover videos purporting to show Planned Parenthood officials haggling over “baby parts” were getting circulated a lot at this time. In fact, one of the protesters recommended that I look them up on Youtube. Also around this time, Carly Fiorina falsely claimed to have seen a video of a fully formed fetus on a table while someone said, “We have to keep it alive to harvest its brain.” So, Planned Parenthood was strongly under attack, and what bothered me was that all of this information against them was either entirely false or misrepresented.” 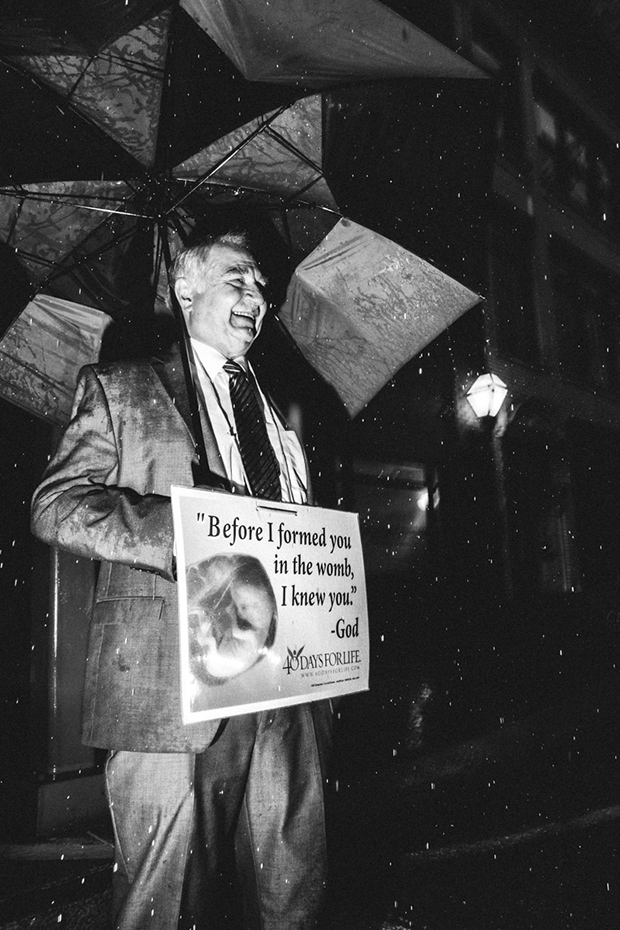 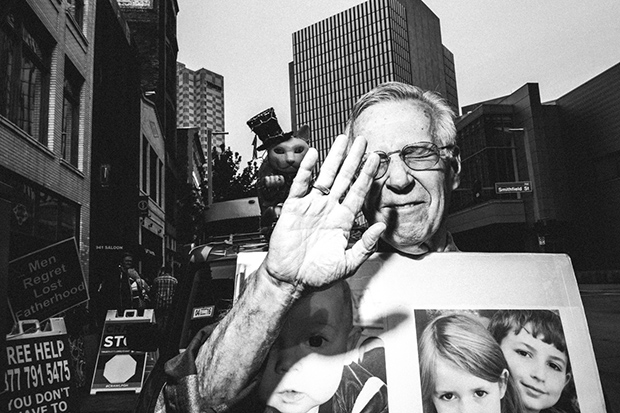 What was the atmosphere like at these protests?
“The atmosphere was usually pretty gloomy. I mean, I keep thinking of a funeral. That’s what it would feel like sometimes. Usually no one was talking, just standing out there with their signs. Other times they would be praying the rosary, which is an odd thing to encounter when you’re just walking down the street in Downtown Pittsburgh. I went to Catholic school for 10 years and was raised in a very, very Catholic family, but it still seemed very strange to me that people would congregate Downtown and make a public spectacle out of praying the rosary.” 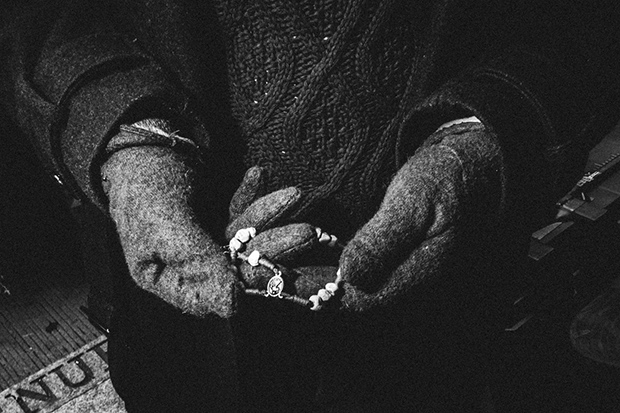 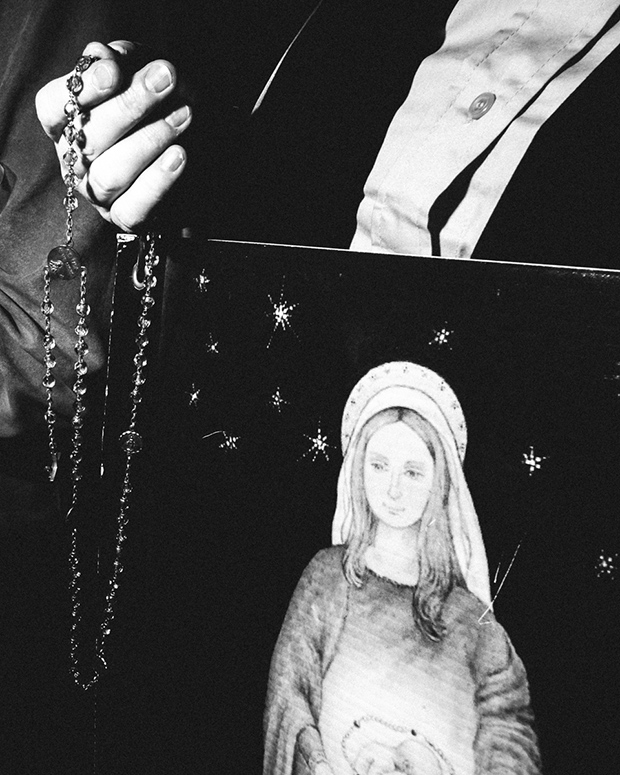 You describe yourself as shy and non-confrontational. How did you overcome that anxiety to make these pictures?
“It was kind of like learning how to jump off the diving board when you’re a little kid. I just kind of had to take a deep breath and do it. There would be a lot of anxiety building up to it. It’s hard to invade someone’s personal space like that. I’m only about 2 or 3 feet away when taking those photos. But they’re invading people’s personal space too in a way, interjecting themselves into people’s private lives as they make difficult decisions, so it seemed appropriate.” 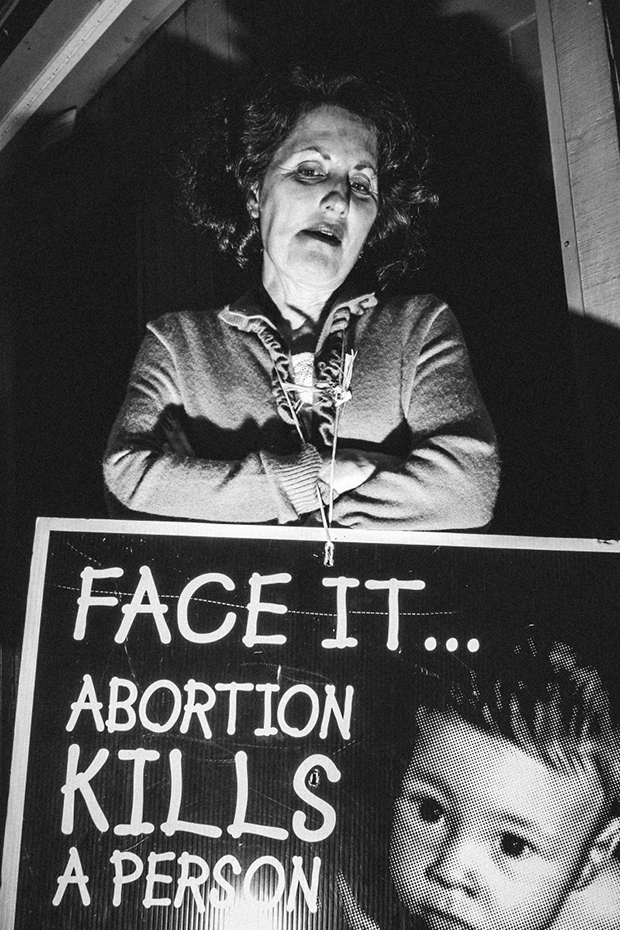 You must have been confronted a few times while shooting. What was the most intense interaction you had with a protester?
“There was this one woman who claimed to have some kind of background in the film industry. She was really insistent that I needed a model release if I want to photograph anyone and use their photo. I knew that was wrong, because I’ve been shooting street photography for years, and I understood my rights as a photographer. I tried to explain that I only needed a model release if I was using the photos for commercial use–like selling them to a company for an ad campaign or selling them as stock photography. Then the next day I saw her she was really confrontational, saying that I was using photography as ‘a form of intimidation.’

“They posted all the Pennsylvania laws about harassment on their blog and were basically just looking for a legal infraction so they could get the police involved. At that point, I contacted an attorney and we went over what I was doing; he confirmed that I wasn’t doing anything illegal. I also contacted the ACLU, but they said they would only get involved if I was arrested. And at that point, I started bringing someone with me as a witness in case it was their word against mine, and we filmed it on a GoPro so that I had documentation.” 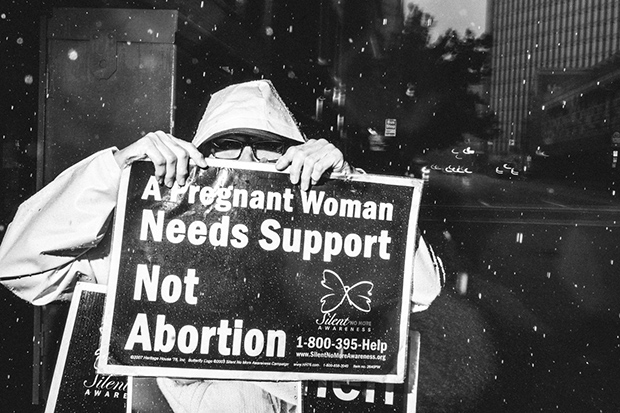 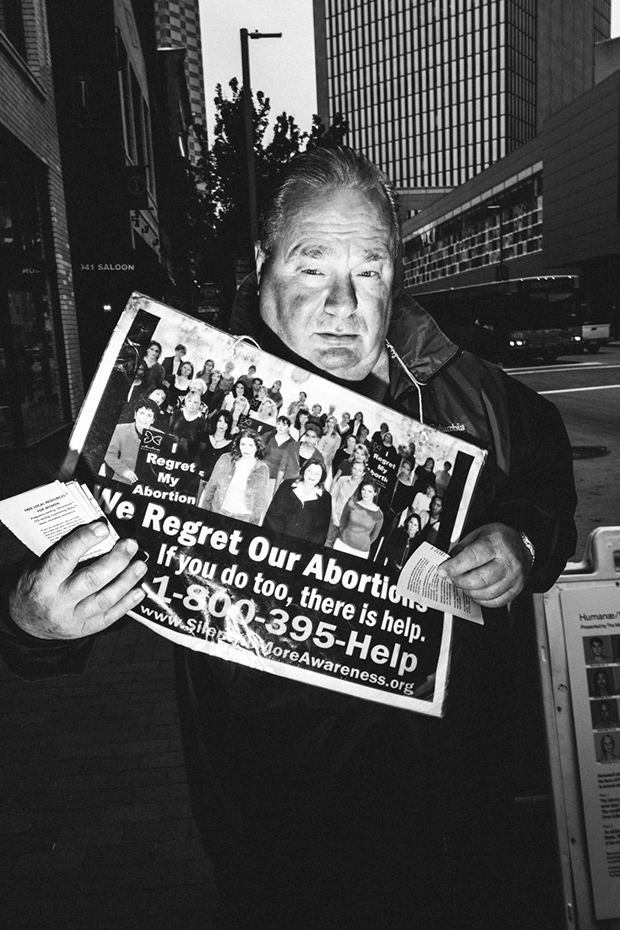 Were women entering the facility during the protests? How did they respond to the display?
“I knew from the start of the project that I was not going to photograph anyone who was going into or coming out of Planned Parenthood. I wanted them to have privacy. And I didn’t see a lot of women coming in or out anyhow. When they did, they just tried to ignore them and go straight for the door.” 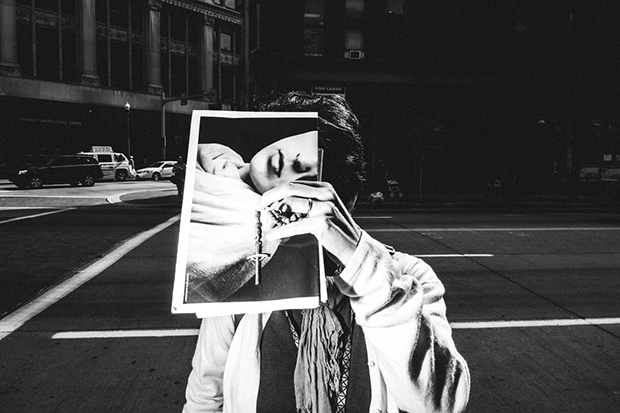 Did making these pictures have any unintended consequences for you, either positive or negative?
“It just ended up being a lot more stressful than I had anticipated. I was having pretty bad anxiety all day towards the end. I couldn’t wait for the 40 days to be over. But there was a lot of positive support too. People who saw the photos were really supportive of what I was doing, and a lot of people volunteered to come with me when I said that I was looking for someone to just come with me and have my back if anything happened.” 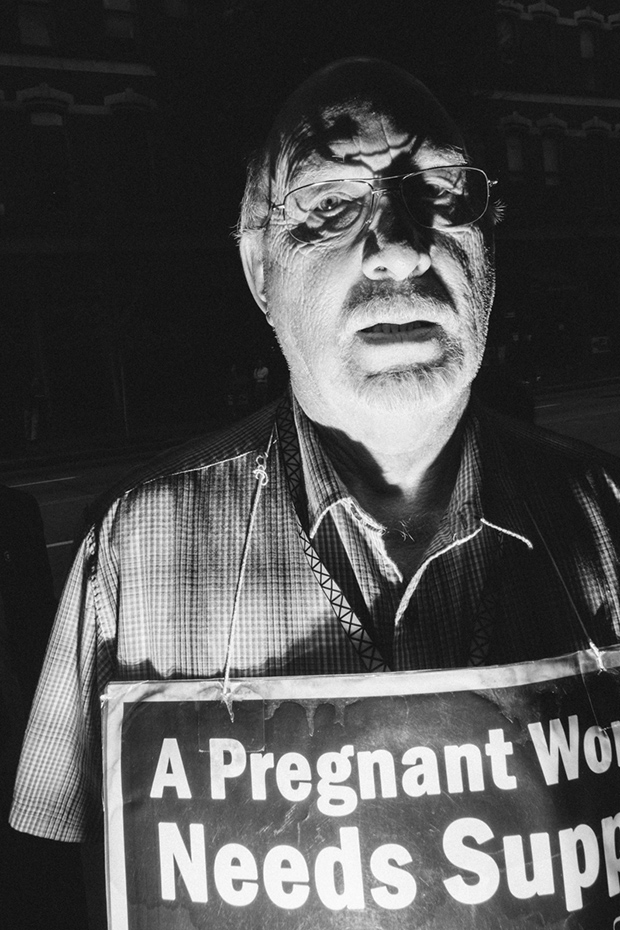 It’s surprising that children attended these protests! Did the kids seem to understand what was going on?
“I was definitely shocked when I saw children out there protesting for the first time. I don’t really know how well they understood what was going on. I mean most adult male legislators in Congress don’t seem to understand how abortion works, so I doubt the kids there had anything other than a vague idea of what they were doing.”

You describe your approach as “aggressive and antagonistic.” Was there ever a moment during the process that humanized these people a bit more for you?
“Sure, the method of working in close with a flash is definitely an aggressive approach to street photography, but at the same time I was always as friendly as I could be. I certainly didn’t argue with anyone or try to debate them. I was just taking photos. And if they wanted to talk, I would have a friendly conversation. They would often try to find out if I was pro-choice, but I just danced around the issue. There was one woman though who started telling me all about her trip to Alaska, and was showing me pictures on her phone. But you know, when a person was friendly like that, when they were just a good person with different beliefs than me, you can see that in their photo. And the people who are more controlling and judgmental, you can see that in their photos too.” 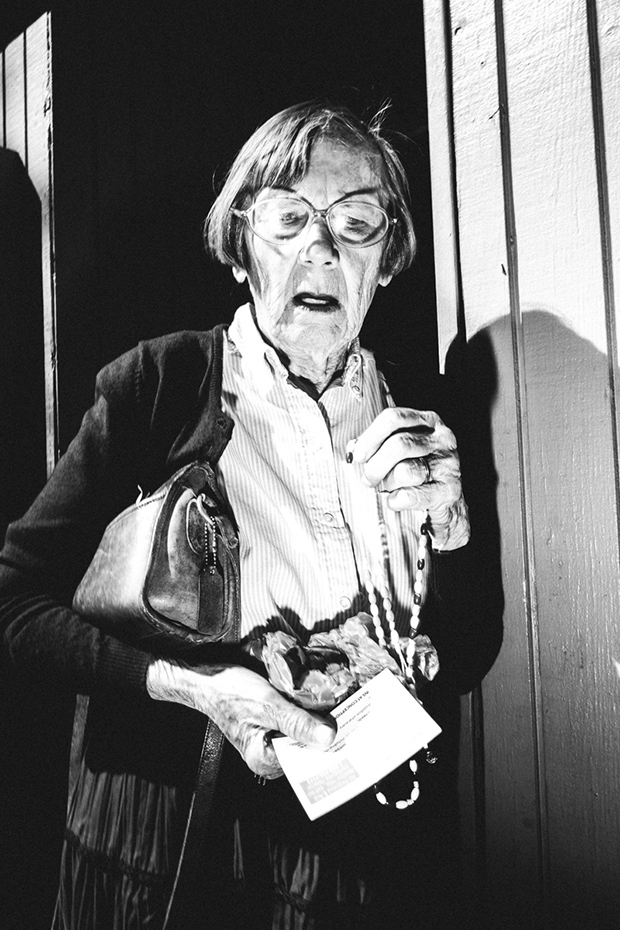 Most people are hiding their faces in some way. Do you think anyone “got the message?” In other words, do you think your scrutiny of them ever made them reconsider what they were doing, if only for a second?
“I really don’t know. It’s ironic though, isn’t it? To be standing on a crowded street voluntarily, wearing a sign, standing up for something you deeply believe in, knowing you’re on the right side, the side that God’s on, and then hiding your face when there’s a camera.” 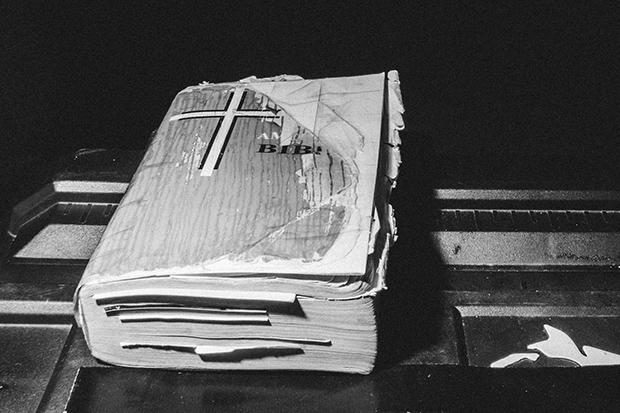 This photo essay was deemed “too controversial” for some publications. Why do you think this series might cause debate, and why is it important to you to release it despite whatever others might think of it?
“It’s no secret that the pro-life community can be pretty vicious and can make a lot of threats–and as in the case of the Colorado Springs shooting, take violent action. So it’s an intimidating community to go against. But it’s important to me to put this work out there, because the majority of Americans are pro-choice; however, the people who are anti-choice are the ones who make the most noise. They’re disproportionately represented in our government. So people who are pro-choice need to start being a little more active. My way of doing that is with a camera.” 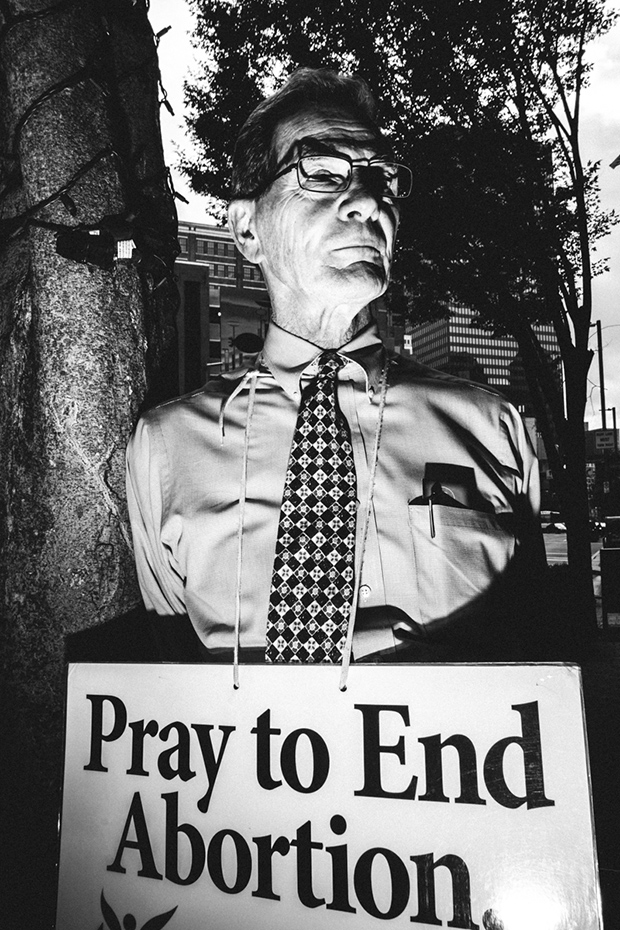 One of the protesters took of a photo of you, and you kept it in the series, in color. Who asked to take it, and did you immediately comply? How did it feel to be on the other side of the lens?
“There was an older man who was there very often. He was one of the nice ones. One day, he just asked me if I wanted him to take a picture of me. I thought he meant on his cell phone, so I just immediately said, “Okay, sure.” I’m not sure if he was just trying to make a point and thought I would say no. But anyhow he said he didn’t have a camera. So I just offered him mine, and showed him how to use it. It turned out to be one of my favorite photos anyone has ever taken of me.” 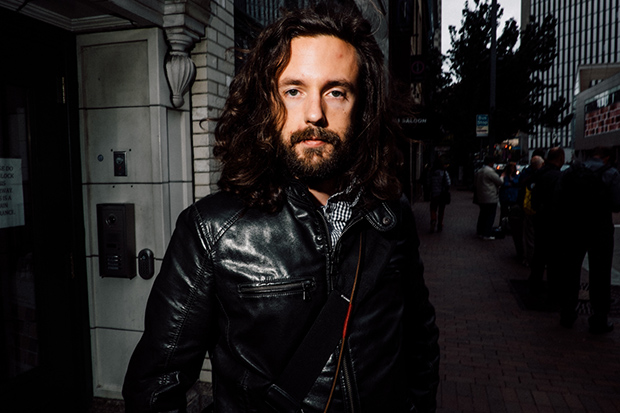