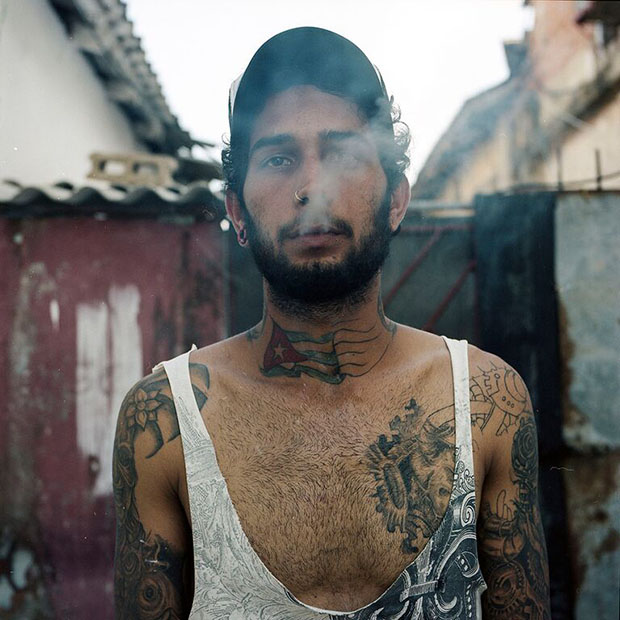 Cristobal (22) has graduated with a degree in Fine Arts and is now working as a tattoo artist in Pinar del Río. Young Cubans are embracing foreign cultural trends more than at any other time. The fondness for tattoos is big and growing, despite the difficulty of tattoo artists to import the necessary equipment (needles, sterilizers, and ink). Recent reforms have not formally legalized the activity, although the first official tattoo studio has opened, attached to an urban art gallery in Havana . 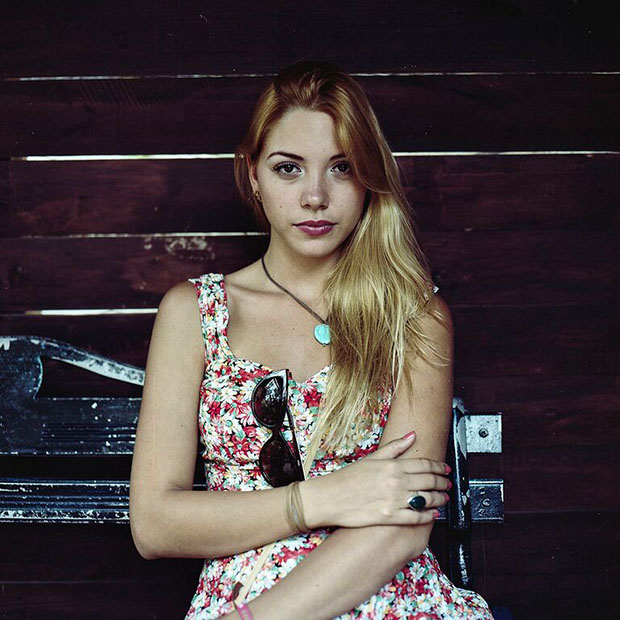 22-year-old Shellys Mayara is a second-year student of the ISA (Instituto Superior de Arte), but she also works as an actress and model. “I am doing very well and I am very happy because I am lucky to be very busy working as an actress, makeup artist and model.” She will participate in a US/Mexican horror film soon. 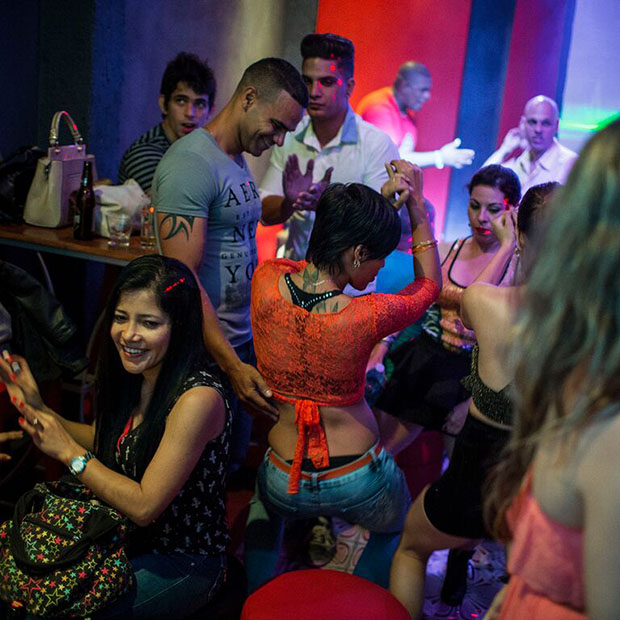 Night party at King Bar, Vedado. In recent years, many private restaurants, bars and new clubs opened, often at prices beyond the reach of ordinary Cubans.

Barcelona-born, New York City-based photographer Edu Bayer has always valued and felt close to Cuban culture and history, but it wasn’t until earlier this year that he finally made the trip to see for himself the metamorphosis of the nation. Cuban Millennials is his ongoing investigation into the lives, heritage, and futures of a the country’s rising generation of creatives and intellectuals, who in the wake of reparations in US-Cuba relations, are forging a new and unchartered path.

When he first touched down, Bayer arrived with the intention of photographing the urban tribes, the countercultural metalheads, emos, rockers, and reggaeton-enthusiasts, and electronic music fans that convene at dusk along Havana’s Calle G. Instead, he found himself drawn more towards the young people who congregated in newer hubs, like Pavellón Cuba, Corner Café, and the Bertolt Brecht Theater, as well as the more familiar locales like the Kcho art studio, where students and young techies can (or at least try to) connect to wireless internet, and the coastal Malecón, a esplanade that someone had described to him as “the place where Cubans go to imagine the world.”

The photographer got to know these youngsters at concerts and art galleries, in tattoo parlors and coffee shops. Aged anywhere from their late teens to mid-twenties, his subjects were unfailingly open-minded and enthusiastic; he forged friendships through shared ideals and a passion for the arts and culture. Despite economic difficulties and the remaining restrictions on their ways of life (skateboarders, for instance, are still subjected to paying fines), they are cheerful and open. They make do, says the photographer, with what they have.

In the face of set-backs, things are changing for the Cuban Millennials. Bayer met a group of independent publishers who had built an online sports magazine; although printing a zine is still illegal, they hope to hit the ground with a running start once regulations are revoked. Tattoos are gradually becoming more accepted and tolerated, and LA MARCA, the country’s first official salon, is open for business .

For the younger generation, says Bayer, the Cuban Revolution, and the economic collapse of the Special Period, are a distant memory, pulled from the history books. Though much of the population still labors for low wages at public jobs, some are pursuing work outside. They love their country deeply, but they tend to be less political than their predecessors, and the photographer notes that he also avoids drawing any political conclusions; instead, he wants simply to tell stories about each of the people he’s met along the way. They want to travel the world; they want to make names for themselves. “They are the new blood, and the future of Cuba,” says Bayer of his subjects. 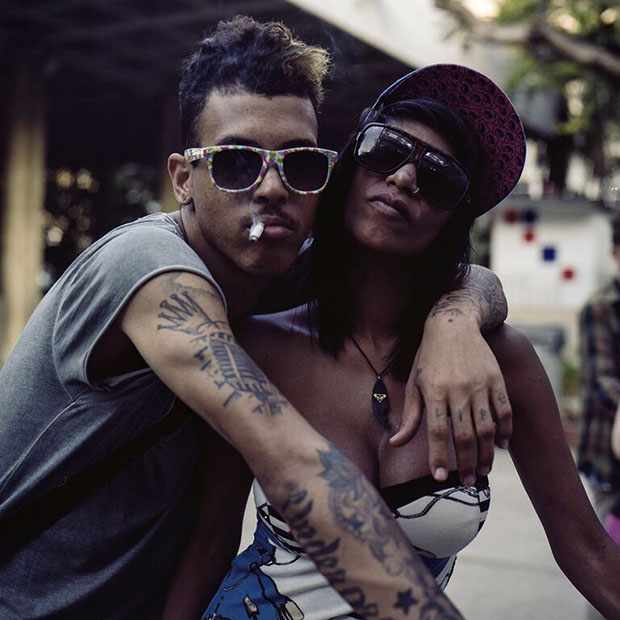 Alhen Mayfren and Belkys Mata pose for a picture at Pavellón Cuba. She is an accountant from Venezuela and came to Cuba on vacation for a couple of weeks. Mayfren is dancer and actor, and he is currently preparing a street show in Old Havana for the “Ciudad en Movimiento” Festival. 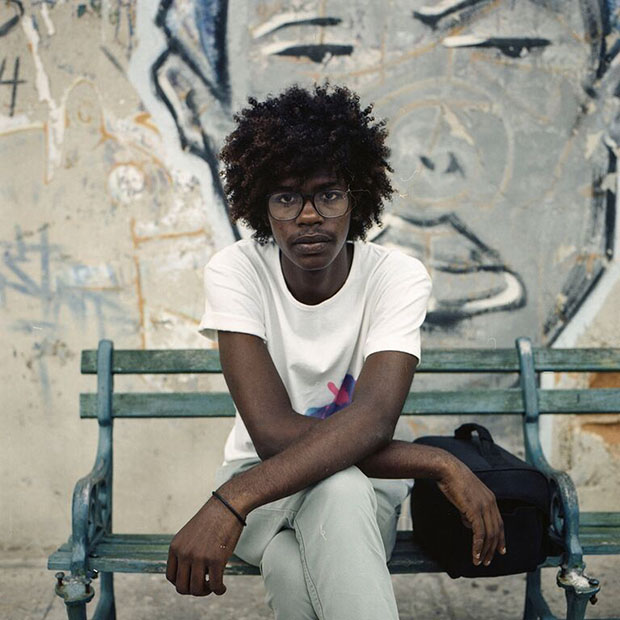 Ernesto Mesa, 21, is a visual artist from Guanabacoa and part of the skaters’ group from Paseo Prado, Centro Havana. He no longer owns his own skateboard, but he keeps going out every day with his gang. A self taught and aspiring artist, Mesa would love to pursue an art history degree. Though both his parents have jobs, they don’t have the money to spend on tuition. “I love doing stencils,” he says, “but I cannot afford the sprays.” A fan of American music, his hairstyle is a tribute to Jimmy Hendrix. 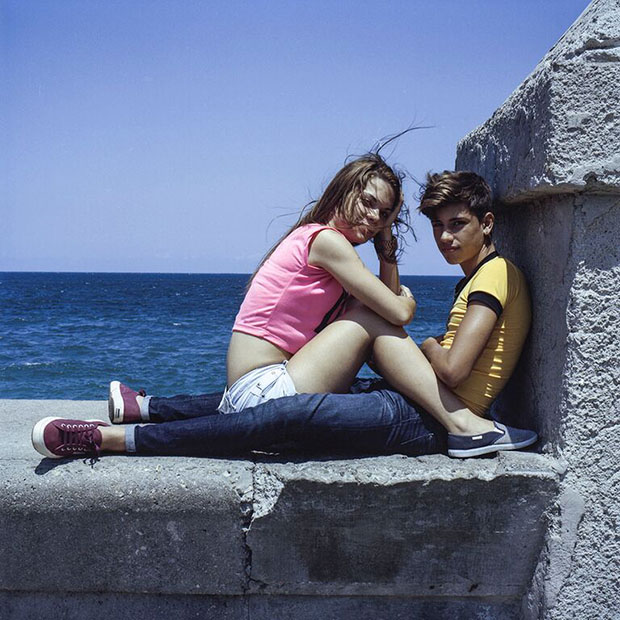 A teen-aged couple at the Malecon, a esplanade that runs for a five-mile stretch along the coast of Havana. A popular spot, this balcony to the sea offers relief from the noisy city. 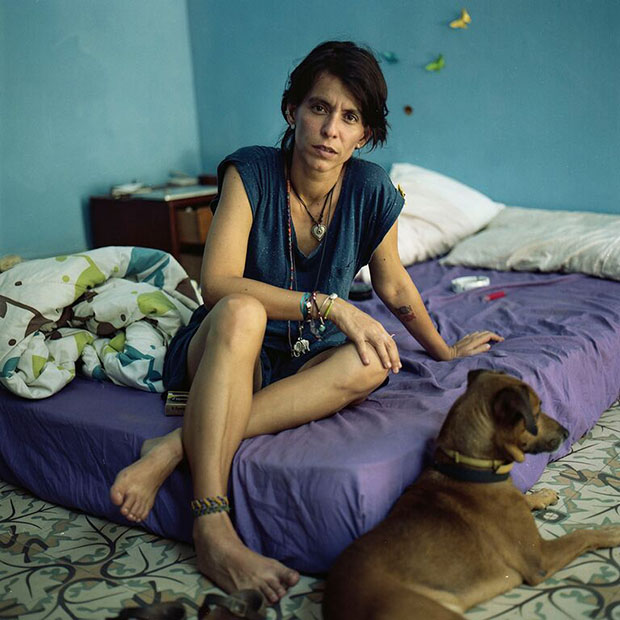 Marta Maria Ramirez, 35, is freelance journalist focused on culture and gender issues. She writes both for Cuban and International outlets. She also works as community manager and is lucky to have internet access at home in Havana Vieja. 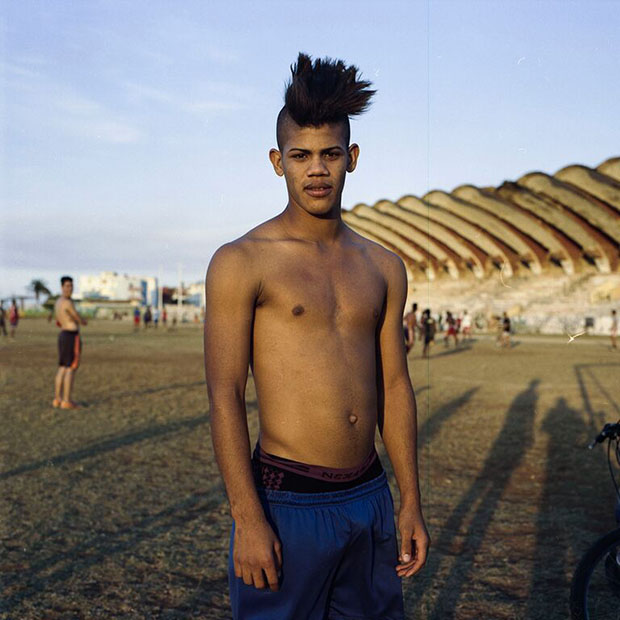 Soccer at Estadio Martí, in the El Vedado neighborhood by the Malecon. This sport seems to be growing quite rapidly since the last World Cup, along with the number of people who support football teams from La Liga or Premiere League in Cuba, where the national sport is baseball. 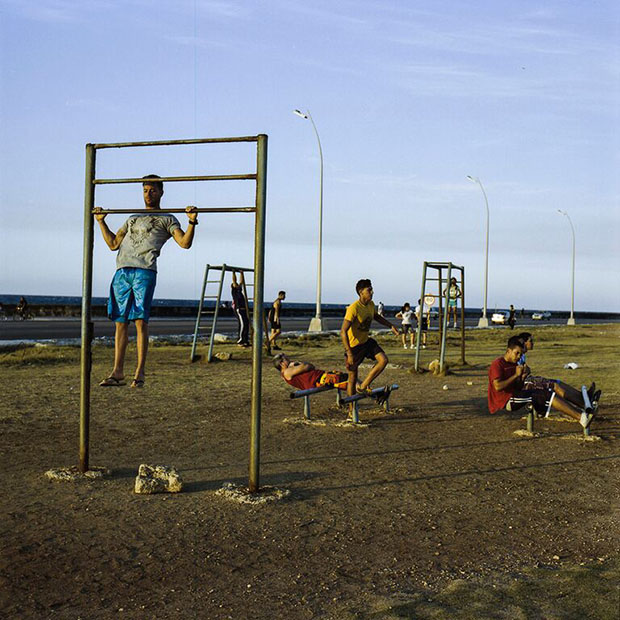 Evening at Estadio Martí sports yard, in the El Vedado neighborhood by the Malecon. There are many open air gyms in Havana where people go to work out. 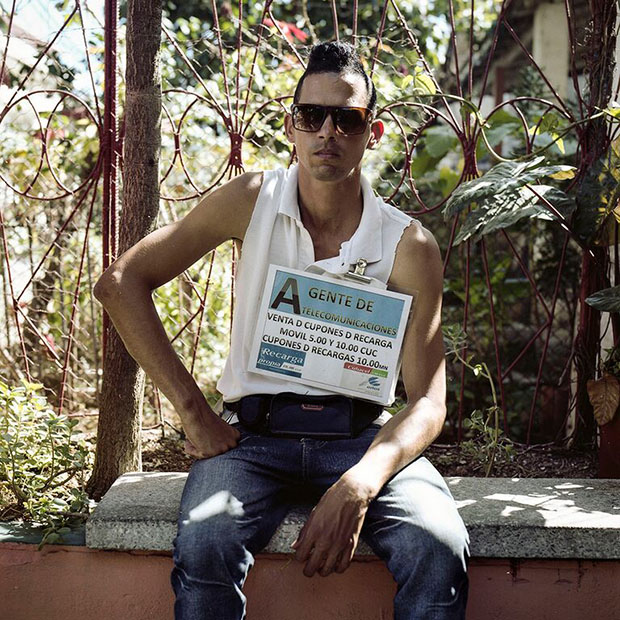 William Montano is a new cuentapropista (an entrepreneur), selling telephone cards in Vedado. The 27-year-old used to be a fisherman, but now he works full time with his new business. He still fishes on Sundays at the Malecón. In addition to the money he makes with phones, he sells his weekly catch: 4-6 pounds of fish. 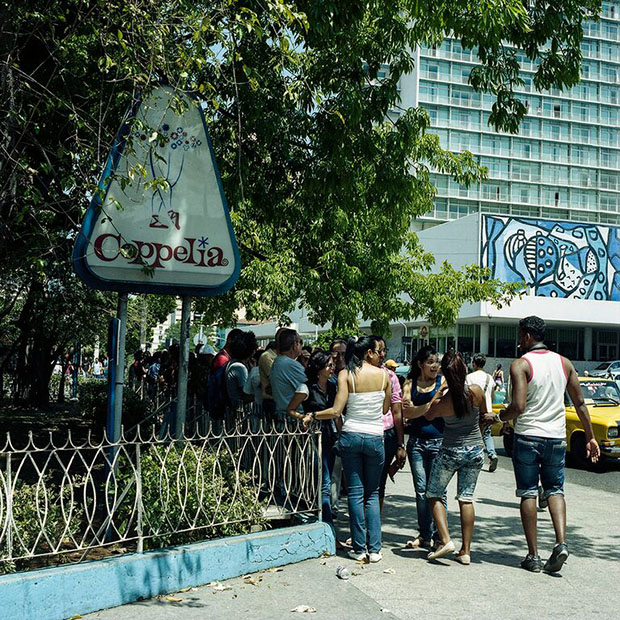 Kids line up at the legendary ice cream parlor, Coppelia, known as the “ice cream cathedral.” A project of the communist government, it was built in 1966 in the city center of Havana. Its advent was marked by whimsy and splendor, offering 26 flavors of ice cream. Today, due to the shortage of products, Coppelia only serves one flavor a day, but still thousands of people come every day, waiting upwards of two hours in line. A scoop of ice cream costs 2 Cuban pesos (8 cents USD). 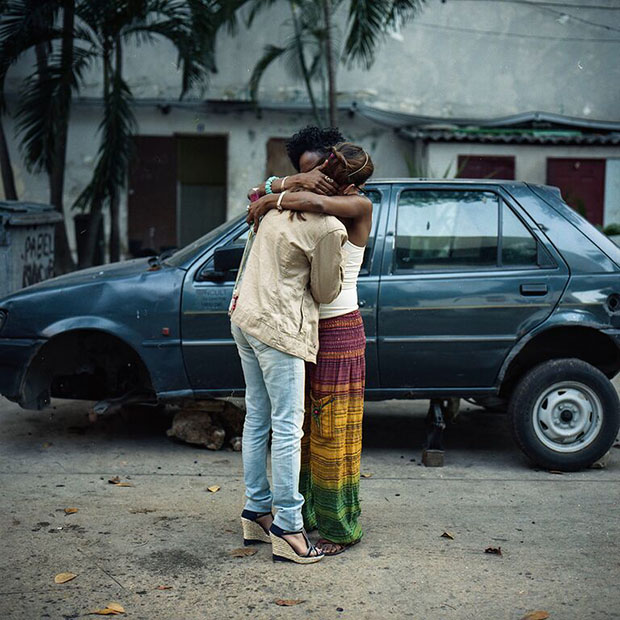 Damarys Benavides consoles her friend, Claudia, who is having problems with a boyfriend, at the entrance of Pavellon Cuba, one of the most important places in youth culture scene because it is the only place where teenagers attend free concerts every day, and youngsters go to have coffee, sodas, beers and rum. 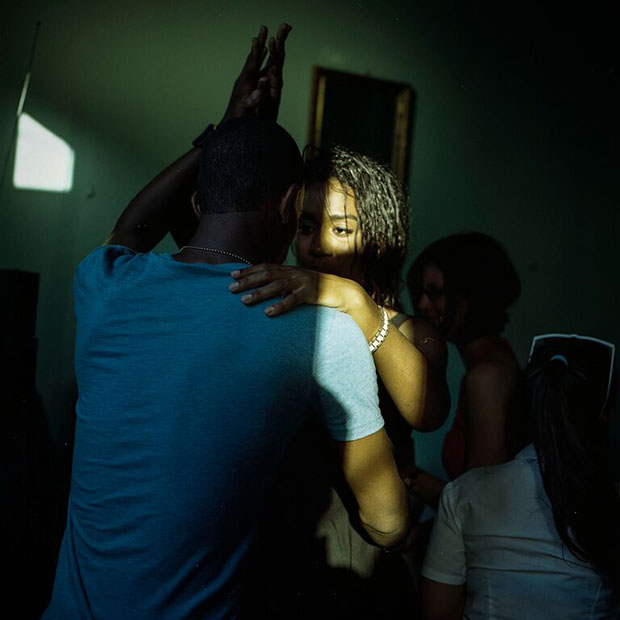 Norca dancing at a music students’ party in Centro Havana. They were celebrating the graduation of Jose Antonio from Amadeo Roldan conservatory, and family and friends were invited to his own home. The party lasted from 5 to 12 at night and was a non-stop music, rum, sodas, beers and snacks. 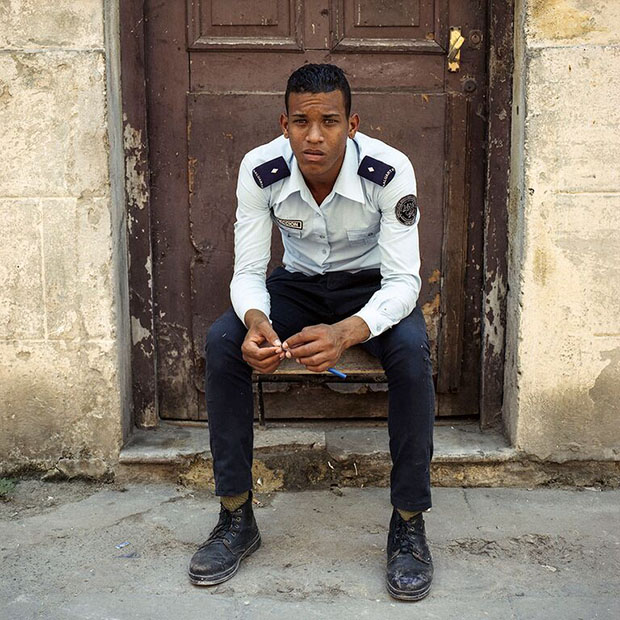 Javier Marine, 20, is one of three guards who watch over the new headquarters of the French Lyceum in central Havana, inaugurated last month by the President of France Francois Hollande. “Thank God I have not had problems because Cubans are not problematic at all.” He hopes to someday study computer science. 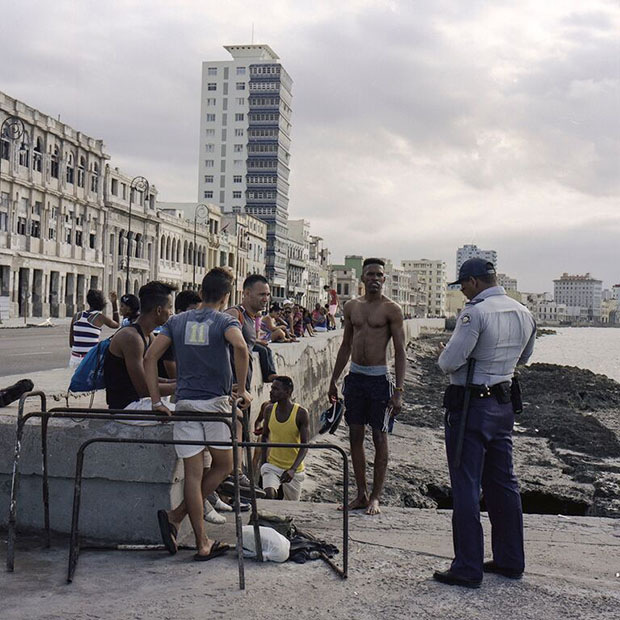 A youth group has come to the Malecon after an afternoon of street soccer. They left the goals aside and jumped into the water when a guard came to fine them because swiming is not allowed in the Malecon. The authorities justify it because of the water pollution and the risks swimmers pose to the reefs and rocks. 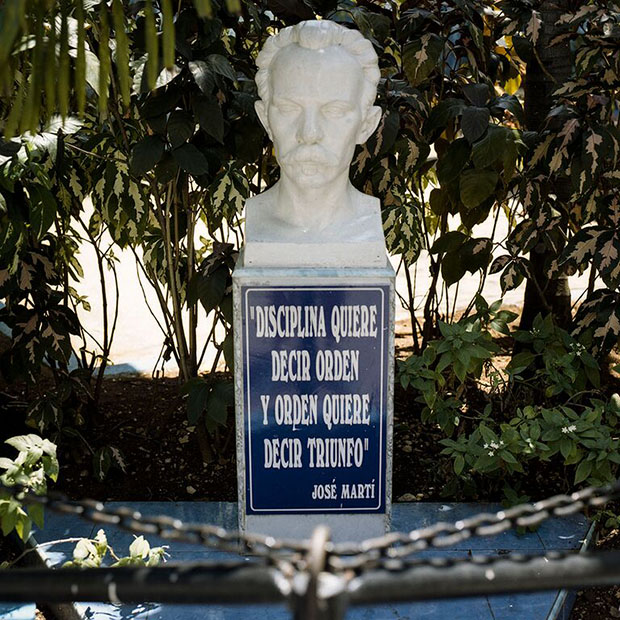 The bust of Jose Marti, the Cuban national hero, can be found in many houses and official buildings. In the picture, you may find the message “Discipline means order, and order means triumph,” 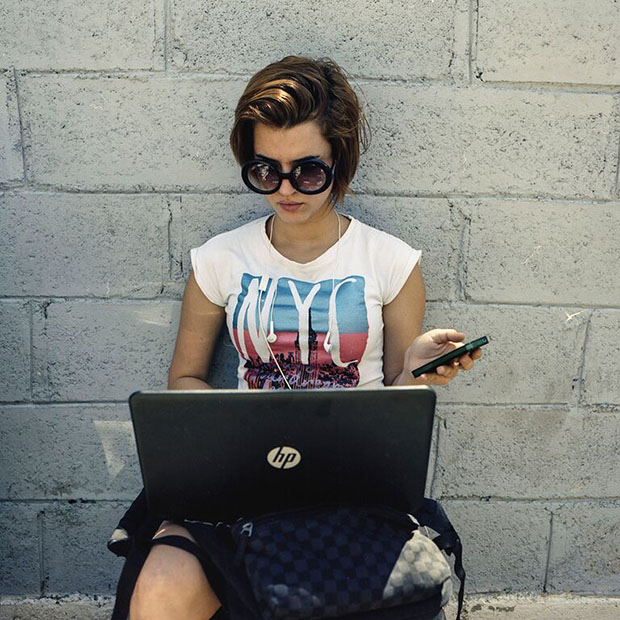 Monica Moltó, a telecommunications student in Havana, at Kcho Studio trying to connect to the Internet. The first free Wifi Internet in Cuba is at the Kcho Artist Studio in Romerillo. Dozens of young people came with their computers and phones to connect, but the network was saturated with users, and no one was able to connect. 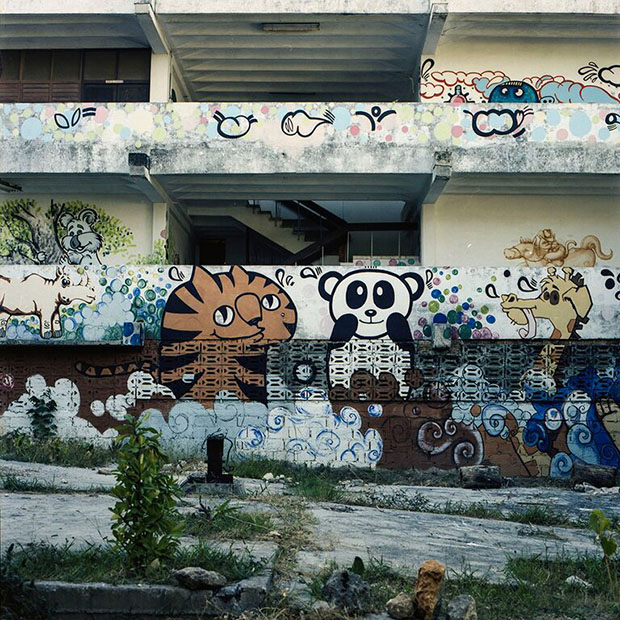 A concrete Soviet-style building in Alamar, a Havana suburb, that was converted into an East Havana Art Center. Alamar is one on the biggest housing projects in Cuba, developed in the 1970s with the help of the former Soviet Union, and now in decay. Alamar is also seen by many as the birthplace of Cuban hip-hop. 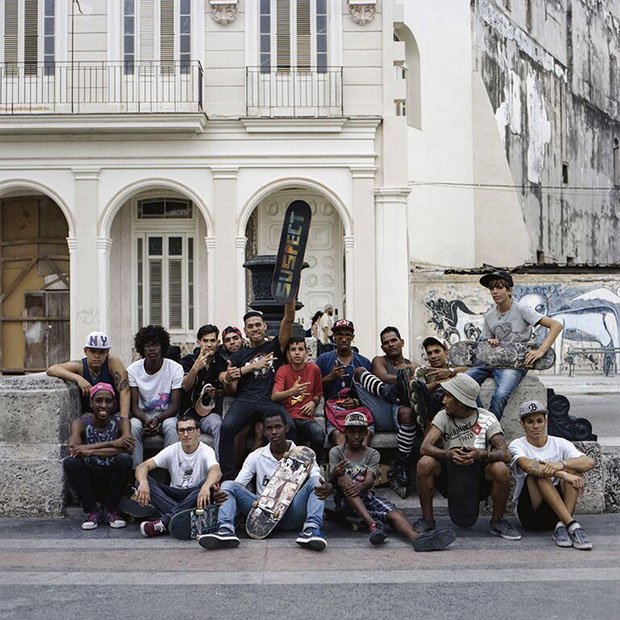 The skaters’ group from Paseo Prado pose for a picture. 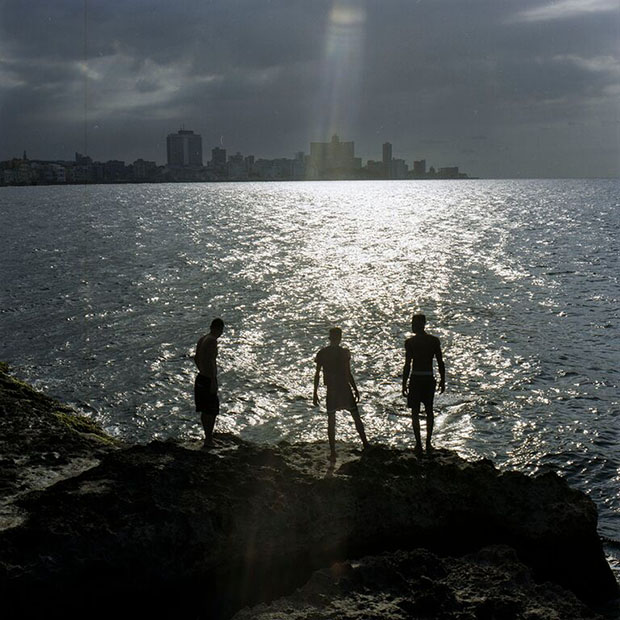 The Malecon is the place where the youth “come to imagine the world.”