Welcome to Miss Muslimah, a Beauty Pageant for Muslim Women 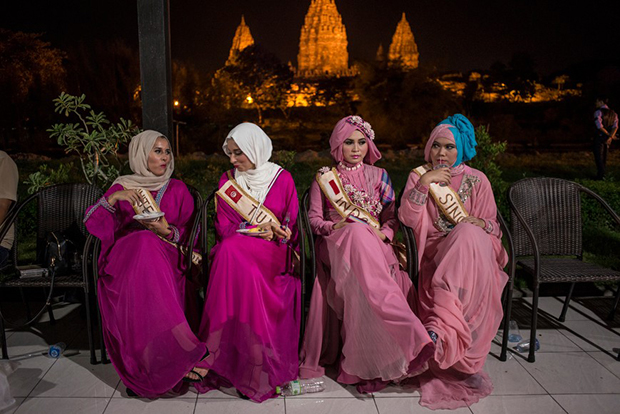 Finalists have a last meal during preparations for the Grand Finale on November 21st, 2014 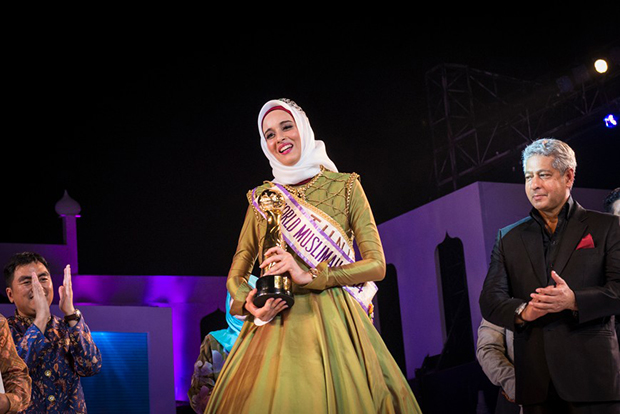 Fatma Ben Guefrache of Tunisia is crowned Muss Muslimah 2014 at The Grand Finale of the Miss Muslimah World Competition on November 21st, 2014. 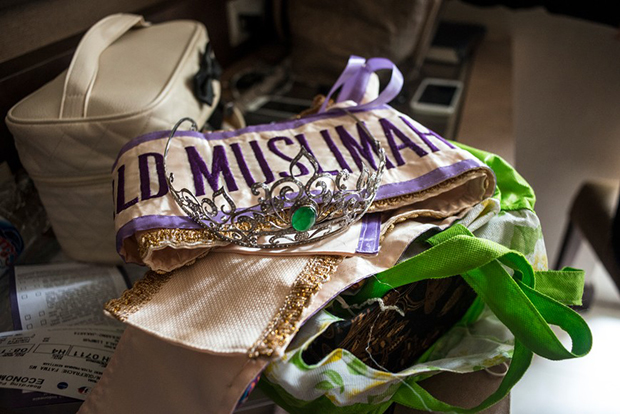 The World Muslimah Award is unlike any other beauty pageant in the world, substituting headscarfs for bathing suits, spiritual piety for baton twirling, and a jury of orphaned children for a set of celebrity panelists. In 2014, Istanbul-based photojournalist Monique Jaques ventured to Yogakarta, Indonesia, where the competition of eighteen young hopefuls unfolded against a backdrop in which Islamic mosques stood alongside Buddhist and Hindu temples.

After traveling from around the Middle East, Africa, Southeast Asia, Africa, and the United Kingdom, Miss Muslimah contenders are quarantined for almost two weeks, throughout which they prepare for the finals. They wake at the crack of dawn, have their makeup done, and are dressed immaculately, all while praying five to six times throughout the day and night. Although the event was founded in part to celebrate the style and elegance of Muslim women, the ladies will also be assessed based on the strength of their characters and their capacity for compassion. During their stay in Yogakarta, they slept very little and devoted their time to calling upon nursing homes and touring impoverished communities.

The World Muslimah Award was established by a woman named Eka Shanty, whose position as a television reporter was taken when she declined to remove her hijab on screen. For many of the women who enter the competition, Miss Muslimah promises a platform that not only permits but requires the symbol of modesty. For many of the women, the hope also is that an emphasis will be placed more on faith and intellectual rigor than on superficial definitions of womanhood.

The women range from doctors to engineers to teachers, and as part of the contest, they will recite passages from the Koran and argue sometimes controversial points about what it means to a woman of the Islamic faith, what behaviors are allowed and which are not. The idea of being a positive example to younger Muslim women is what drives many contenders, some of whom leave their jobs in order to compete. The extent to which the award empowers women varies based on the person asked. As reported by Al Jazeera, for whom Jaques shot the story, some were offended by the importance of physical appearance; they were dressed in extravagant gowns, and sponsoring companies provided an array of cosmetics, including controversial skin-lightening products.

Ultimately, Jaques admits that she herself believes that award does good for women: “I think it brings light to strong educated women who have goals and issues, and the hijab won’t deter them.” Many have faced prejudice for their religious beliefs; one was even denied admittance to a university in France. Together, they stand up for the rights of Muslim women around the world. Miss India, 2014’s runner up, was passionate about educating her country’s girls, especially those living in remote and rural areas. Miss Bangladesh, says the photographer, campaigned for women’s healthcare.

The final crowning of Miss Muslimah comes down to the vote of one hundred orphaned children, who in 2014, selected Miss Tunisia to win the grand prize of a pilgrimage to Mecca in Saudi Arabia, a watch made of gold, a trip to South Korea, and a collection of gold dinars valued at $10,000. Of her time with the eighteen contestants, Jaques concludes, “not all of the girls were satisfied after the experience, but I think all the girls got something out of it,” adding, “these women coming together was a wonderful event to be part of.” 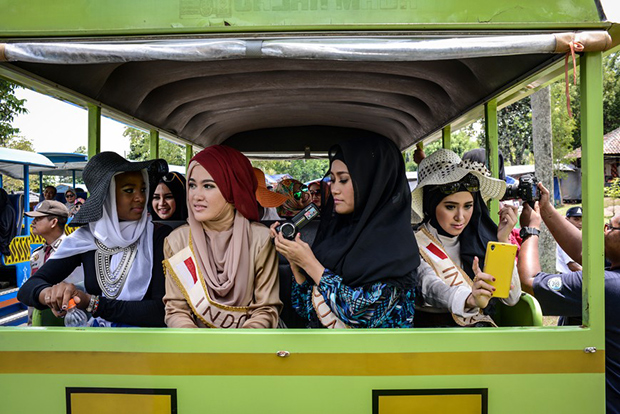 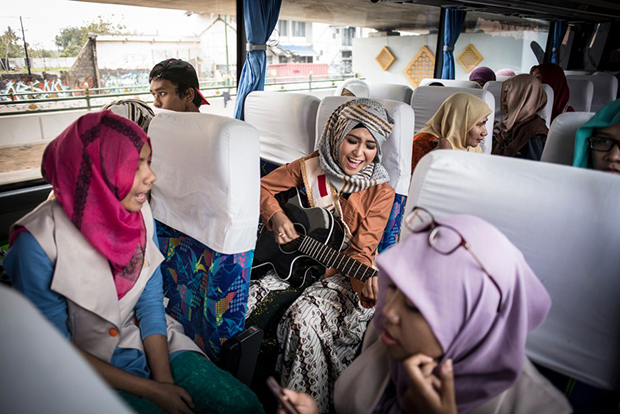 Indonesian finalist Elis Sholihah leads a sing-along on the bus between events. 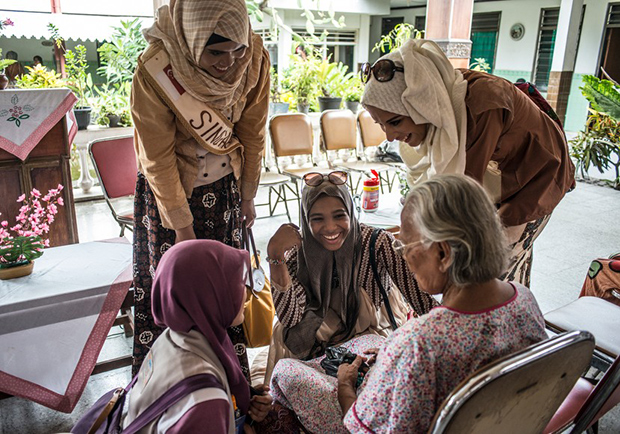 At an elderly home, the girls are tested on their charity and compassion. 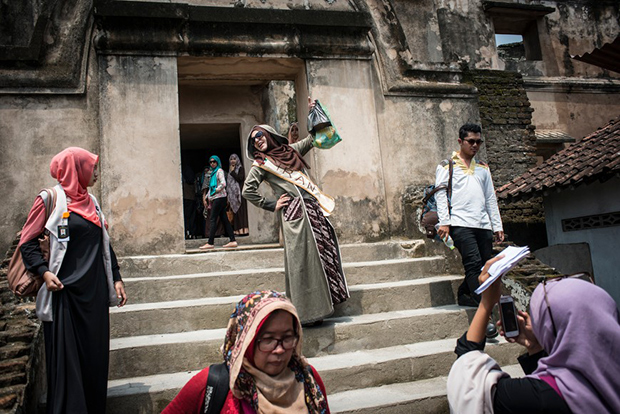 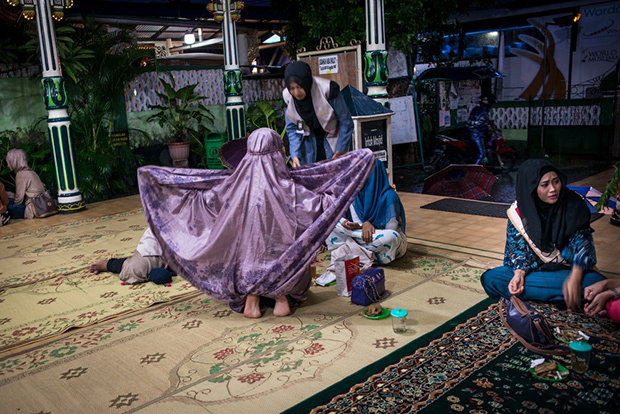 The finalists at a mosque before praying. 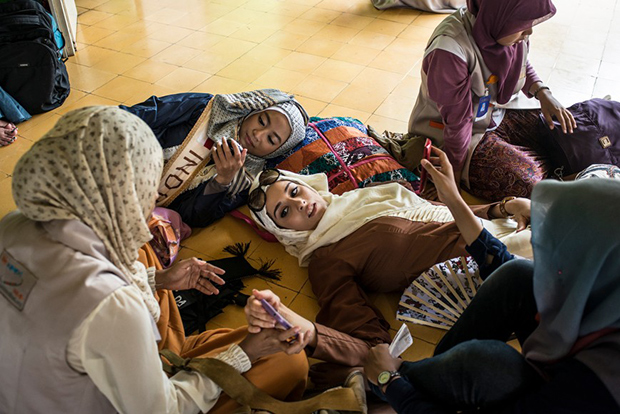 Fatma Ben Guefrache, the finalist from Tunisia and one of the Indonesian finalists rest after praying at a mosque. 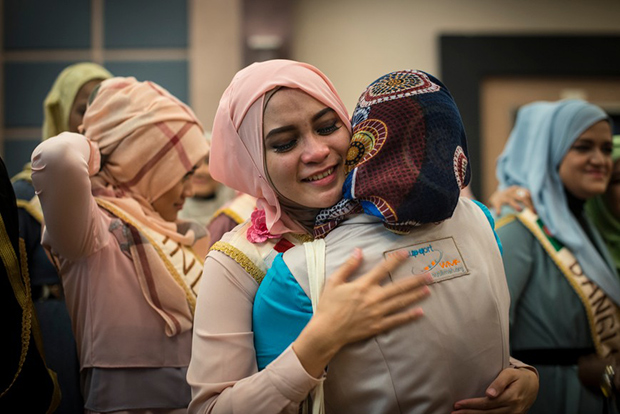 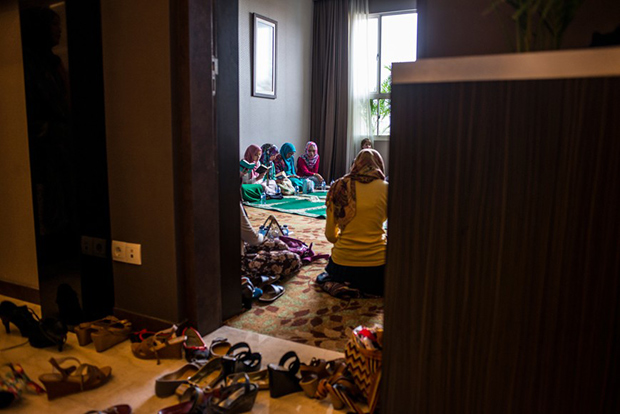 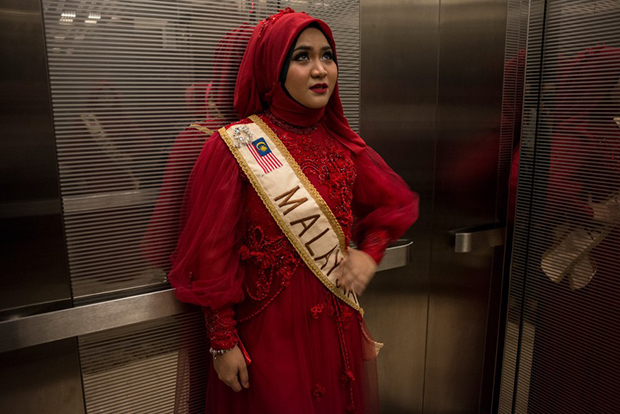 Nur Khairunnisa of Malaysia on the elevator before the ball on November 19th, 2014 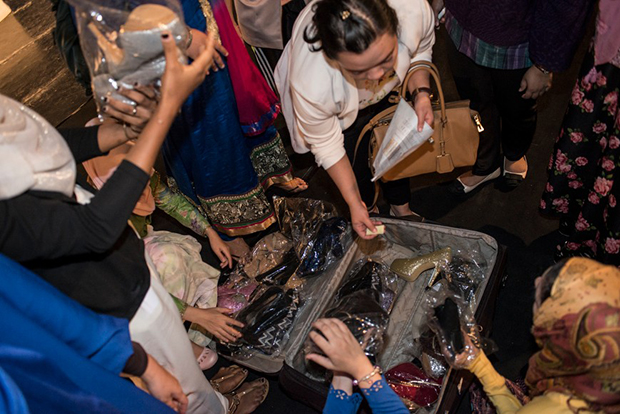 The finalists are given their shoes and begin rehearsals for the Grand Finale on November 20th, 2014 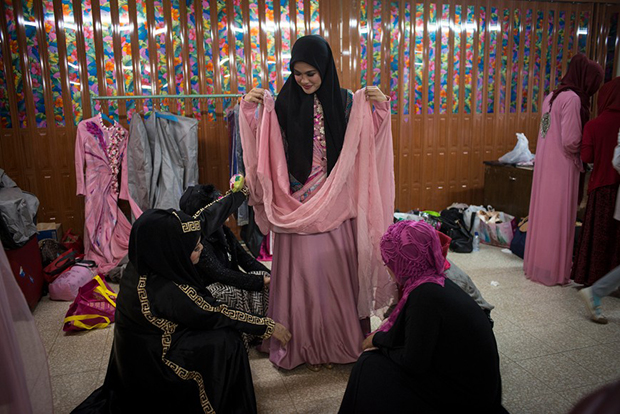 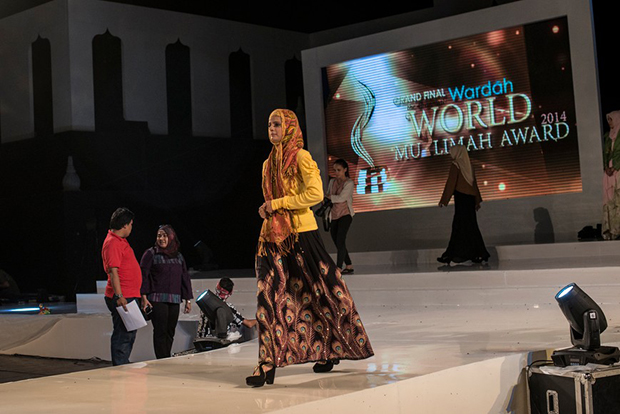 The finalists are given their shoes and begin rehearsals for the Grand Finale on November 20th, 2014 in Yogakarta, Indonesia. Pictured walking is Nazreen Ali. 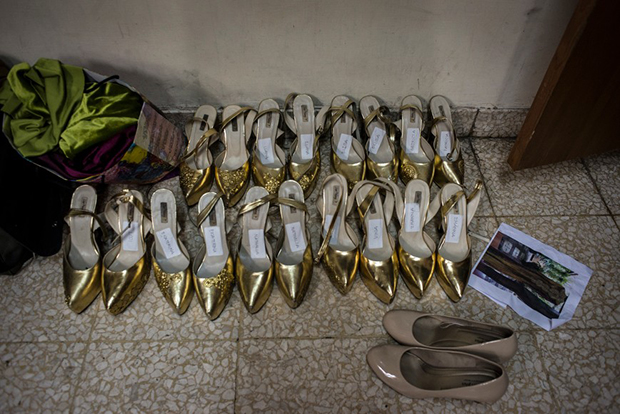 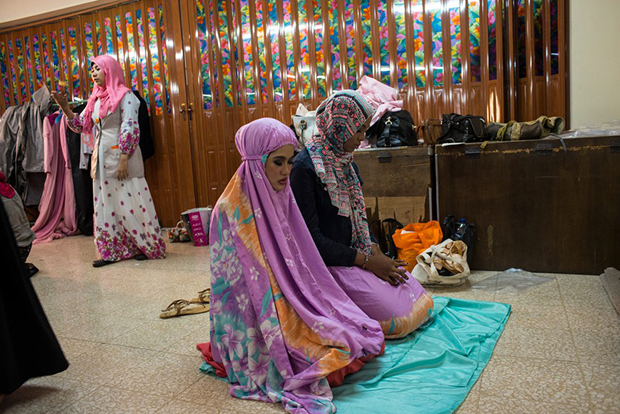 Finalists pray during preparations for the Grand Finale on November 21st, 2014 in Yogakarta, Indonesia. 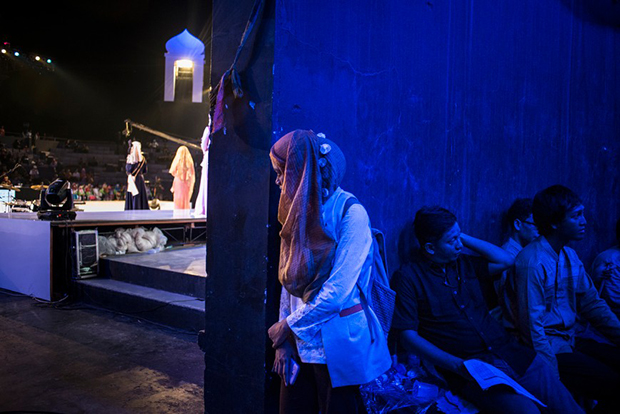 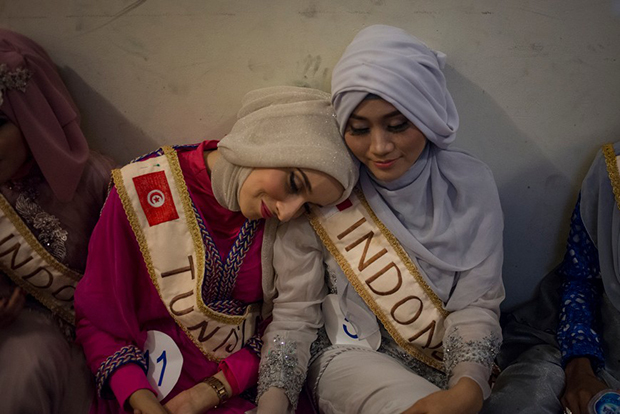 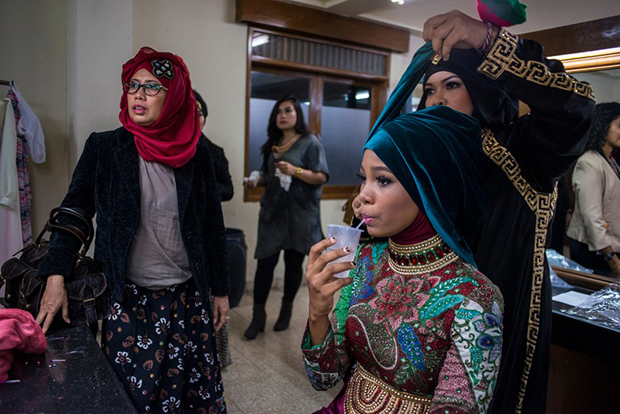 After advancing to the second round, Miss Nigeria, Bilqis Adebayo, drinks water while stylists work on her hijab. 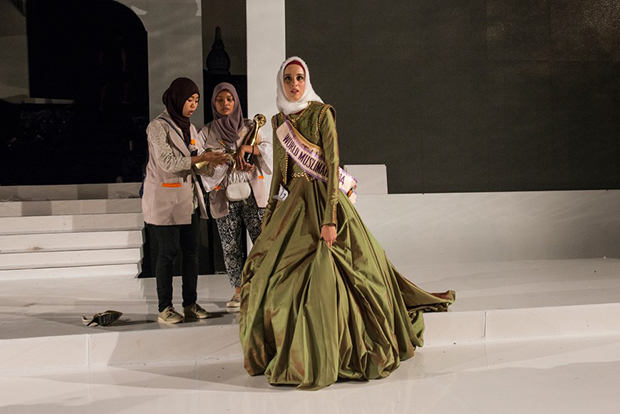 After the event is over, Miss Muslimah 2014, Fatma Ben Guefrache of Tunisia, looks around the empty stage.