Photographers Revisit the Site of the Vietnam War, 40 Years Later 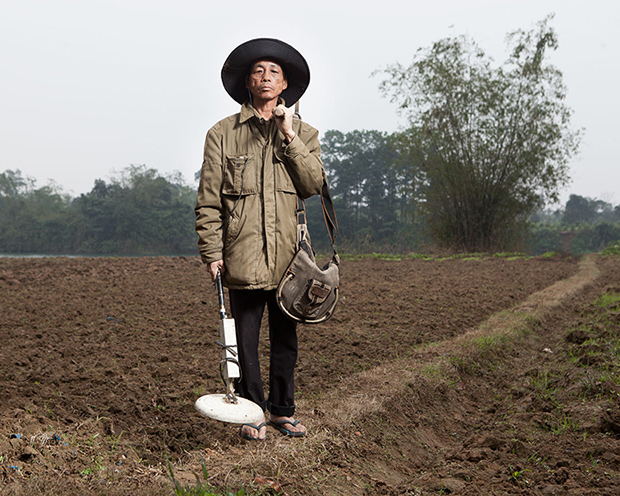 Le Hoai Thuong with a metal detector to search for unexploded ordnance in Central Vietnam. 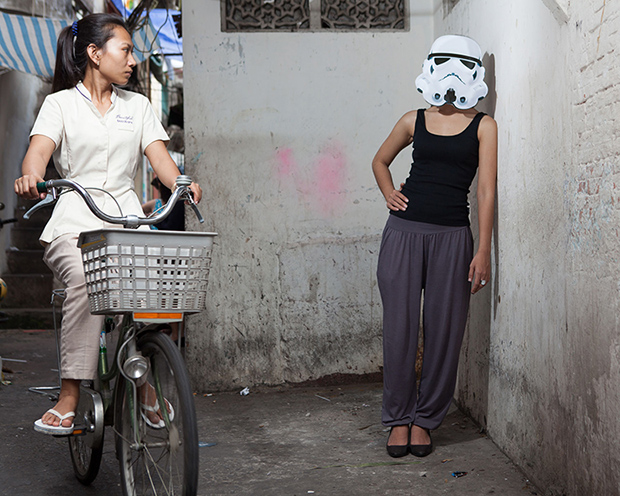 A woman with a Star wars Mask in the Streets of Ho-Chi-Minh-City. Star wars is considered to be a metaphor of the Vietnam war. 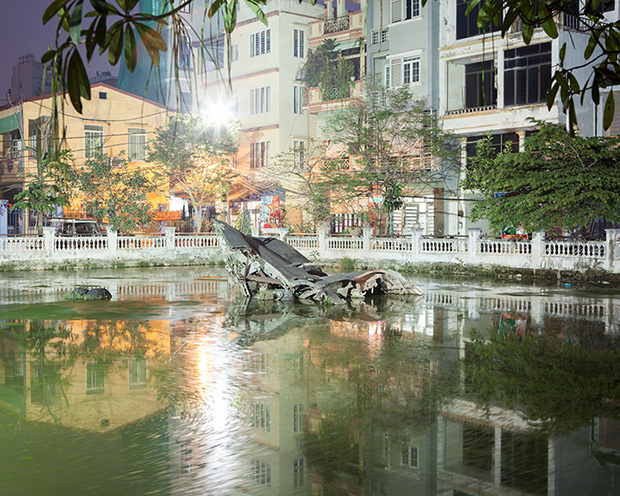 Over Hanoi, the North Vietnamese Artillery shot down a B52 during the Vietnam war. The remains can still be seen in the lake

Berlin-based photographers Miguel Hahn and Jan- Christoph Hartung, who together form Hahn+Hartung, go against the grain of tradition war photography in that they are drawn not to modern-day battlefields but rather those that have been forgotten and buried by decades of history. For Texas Saigon, the duo returned to the scene of the Vietnam War, piecing together a story told by wounds that remain unhealed—if bandaged—forty years after the Fall of Saigon on April 30th, 1975.

Hahn and Hartung admit that their intention was never to create an objective document of Vietnam; instead, they traversed the country from the south to the north and back down again, all in search of the people and places who carry still the weight of the past four decades. Their own conception of the nation, they explain, was shaped in part by Hollywood films, and in order to convey their own perception upon entering the country, they include in the body of work screen captures from movies set during the Vietnam War. In some ways, they suggest, Vietnam itself has been shaped by capitalist currents and by Western popular culture. Flocks of tourists flood its cities in search of remnants of the conflict, and vendors offer military objects and wartime artifacts for sale; Saigon is home to a tourist bar named Apocalypse Now after the film by Francis Ford Coppola.

On the surface, report the photographers, the war is simply a memory. The people they encountered in Vietnam, says Hartung, did not harbor any resentment or ill-will towards Americans or their government, and the conflict is not a large part of their daily lives. Once they tread a little deeper, however, they found obvious scars—both visible and visible—that lingered still. In Hanoi, they discovered The Peace Village, where children and young adults who have been harmed or disabled by the 21,135,000 gallons of Agent Orange dumped over the country during the war are rehabilitated and given care. The consequences of the chemical, notes Hartung, are predicted to extend into three to four generations yet to come. Vietnam’s once-verdant jungles are pockmarked with bald spots and hollows cleared by bombs, some of them having filled with water to form small lakes.

In Vietnam, Hahn and Hartung find a confluence of communism and capitalism, where the absurdity of popular culture references are countervailed by the sobriety of real life. Following clues left only by a Martin Parr photograph they encountered years before, Hahn and Hartung were able to track down a man who makes his living looking for and selling dangerous unexploded ordnance. They carried a print-out of the photo around the village until they arrived at his doorstep, where they were able to learn his story by drawing pictures and translating back and forth with a teenager who had lived in Munich for a time. Ultimately, the artists conclude that much of the damage done by the war remains unseen: “There is still a lot influenced by the late consequences of the war, but you have to search for it.” 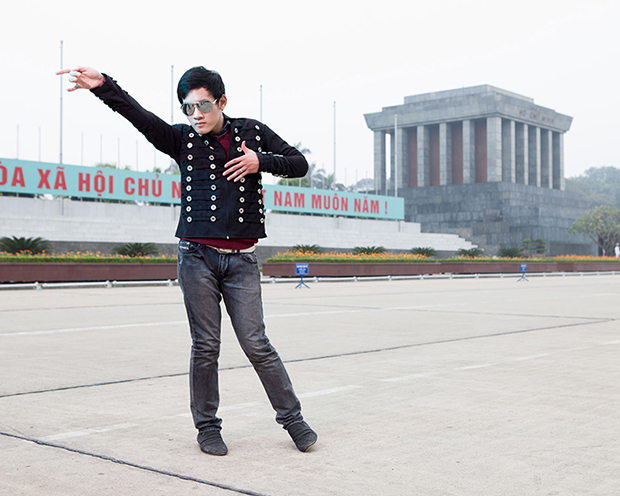 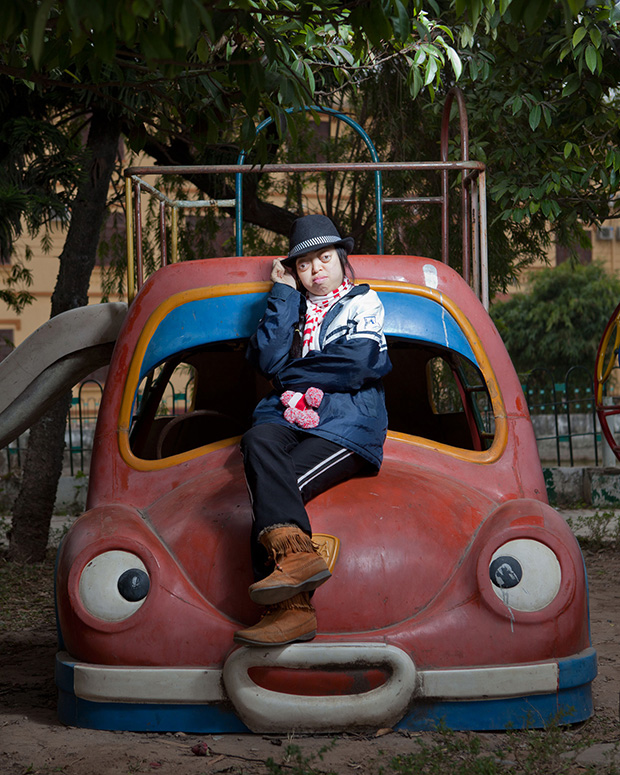 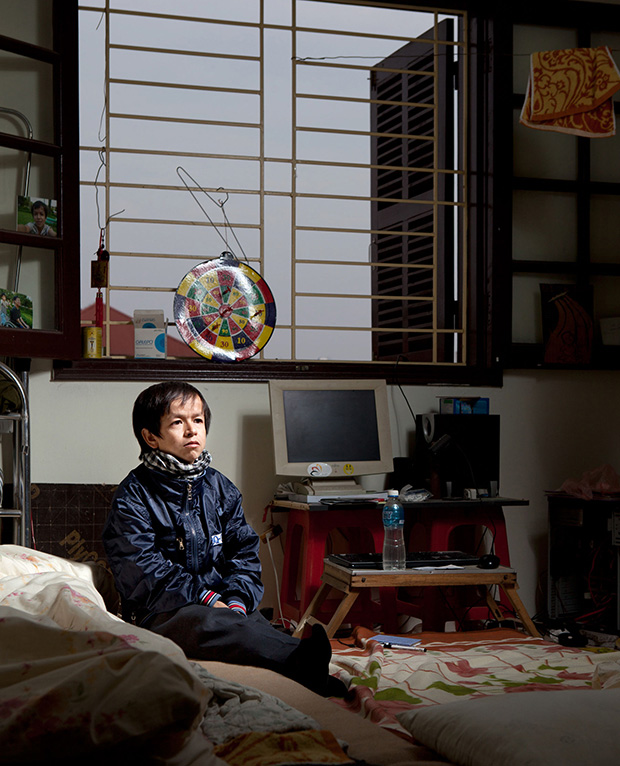 Long Canh in the Friendship Village in Hanoi. He is suffering from the effects of Agent Orange. 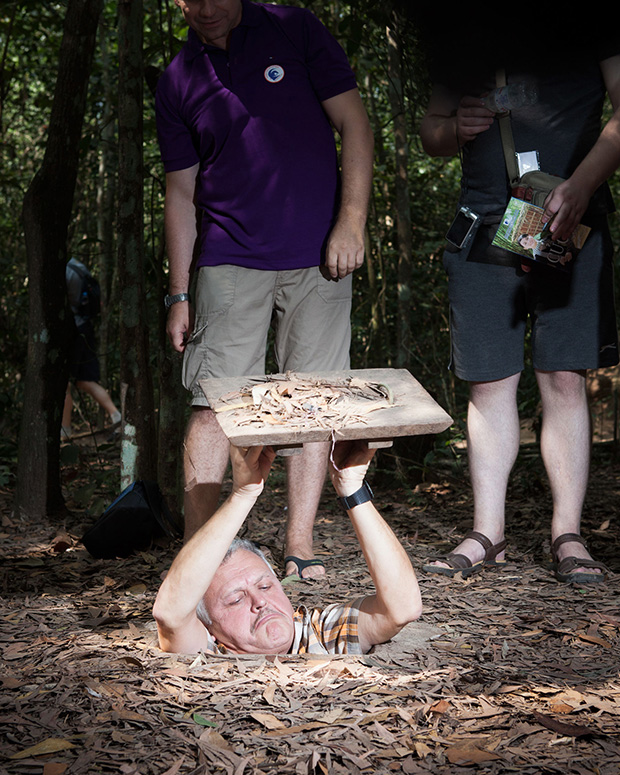 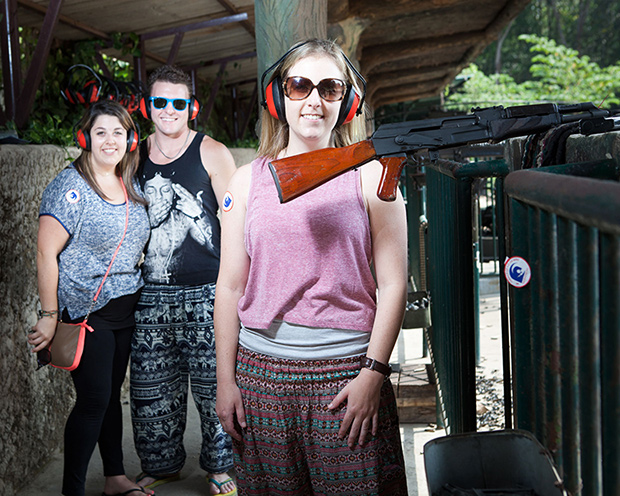 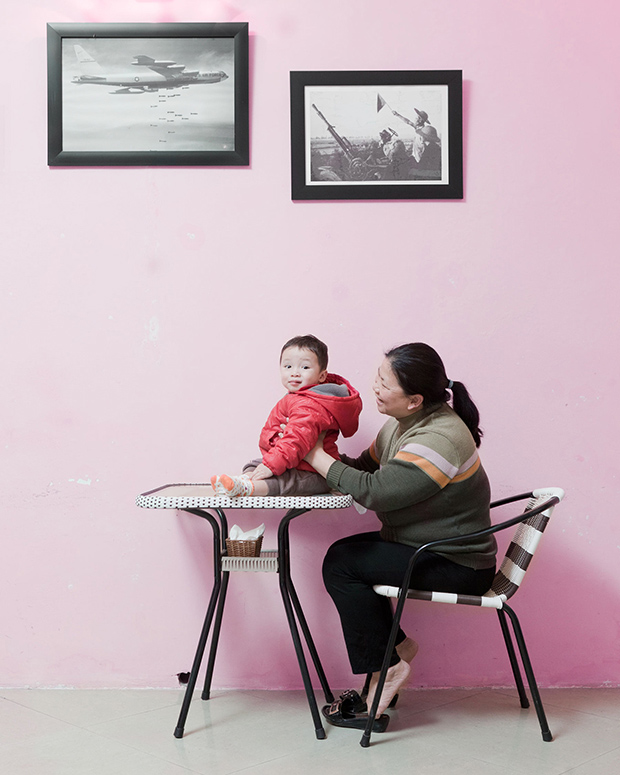 B52 Cafe in Hanoi. Next to the Cafe, the North Vietnamese Army shot down a B52 during the Vietnam war. The remains can still be seen in the lake. 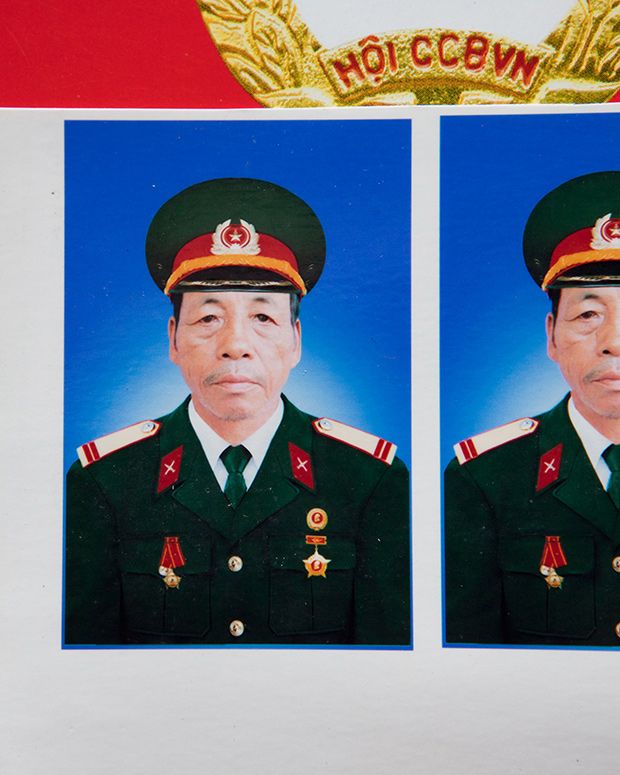 Le Hoai Thuong in a South Vietnamese Army Suit. These days, he uses a a metal detector to search for unexploded ordnance in Central Vietnam. 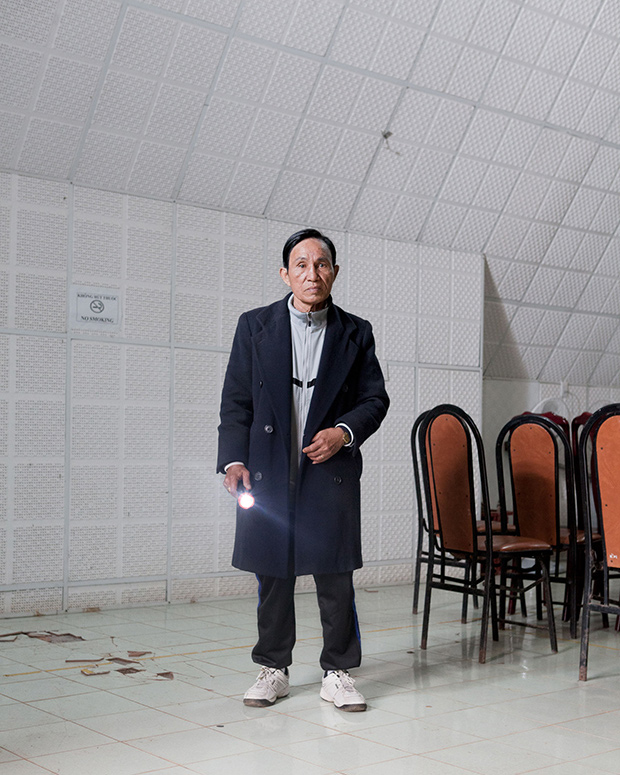 Mr. Vinh worked as an interpreter for the US Army during the war. He now offers tours to the former Demilitarized Zone. 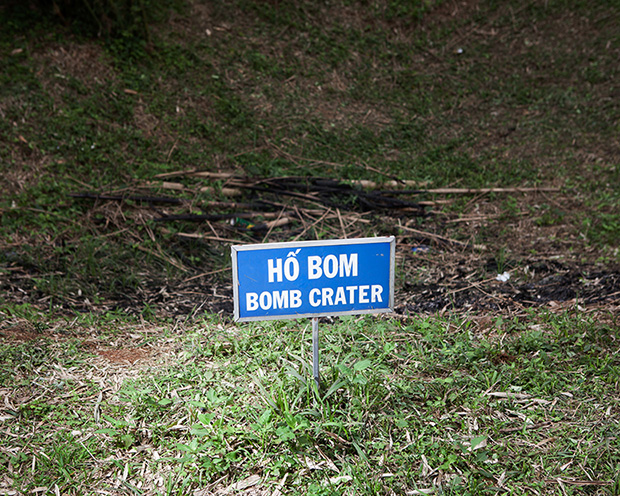 Bomb crater at the former demilitarized Zone in Central Vietnam. The former DMZ is now a tourist attraction. 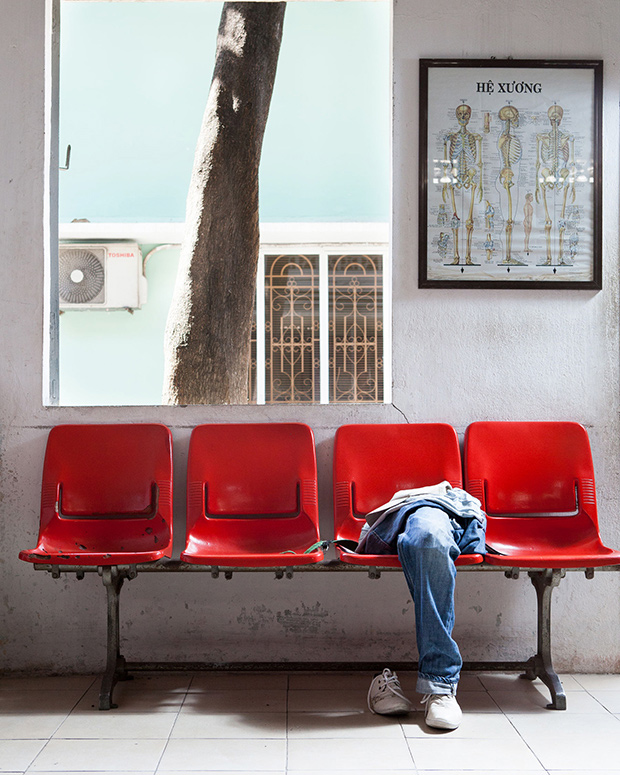 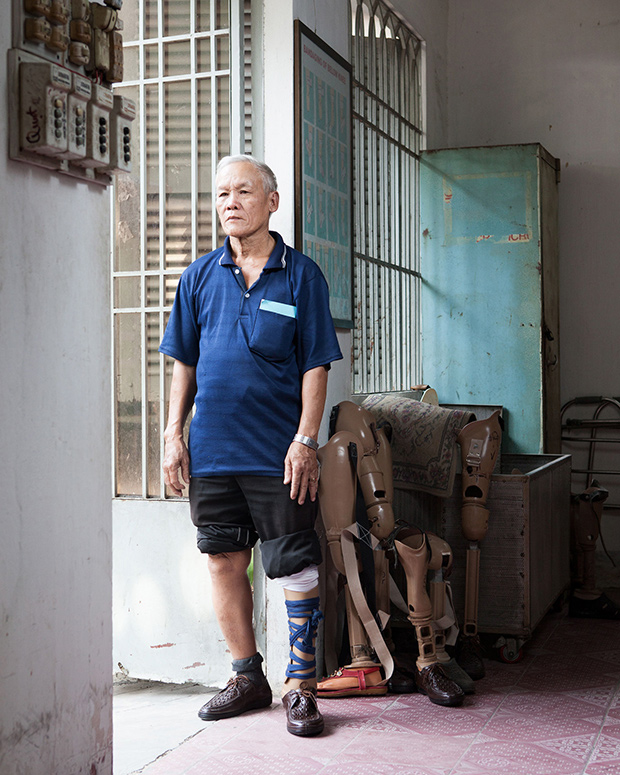 Nguyen van Ngu stepped on a Landmine in the Mekong Delta in 1972. 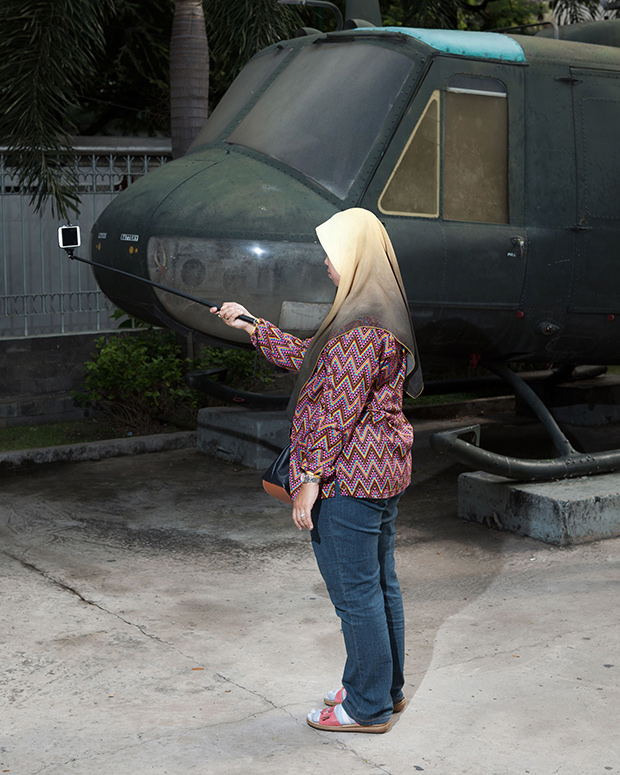 A tourist is taking a selfie at the War Remnants Museum in Ho-Chi-Minh-City (formerly Saigon). In the background is one of the typical helicopters that were used in Vietnam by the US Army (Bell UH-1). 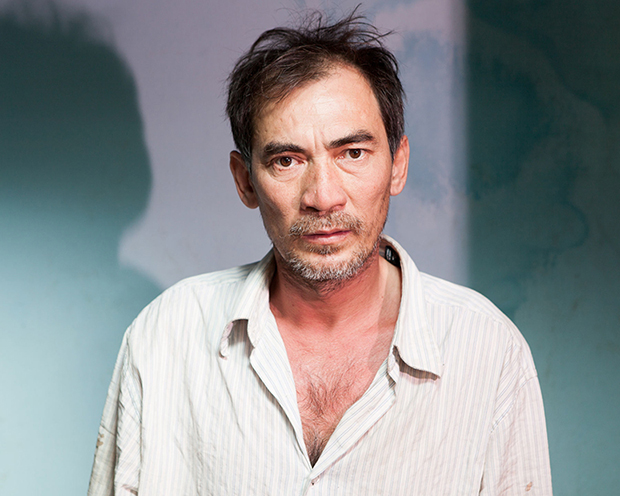 To Qoc Viet, an Amerasian whose father was an US Soldier fighting in Vietnam. 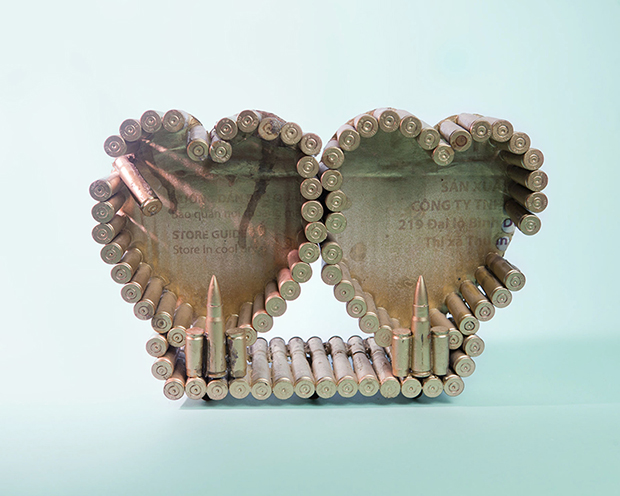 A memento of the Vietnam War at a war market in Ho Chi Minh City. 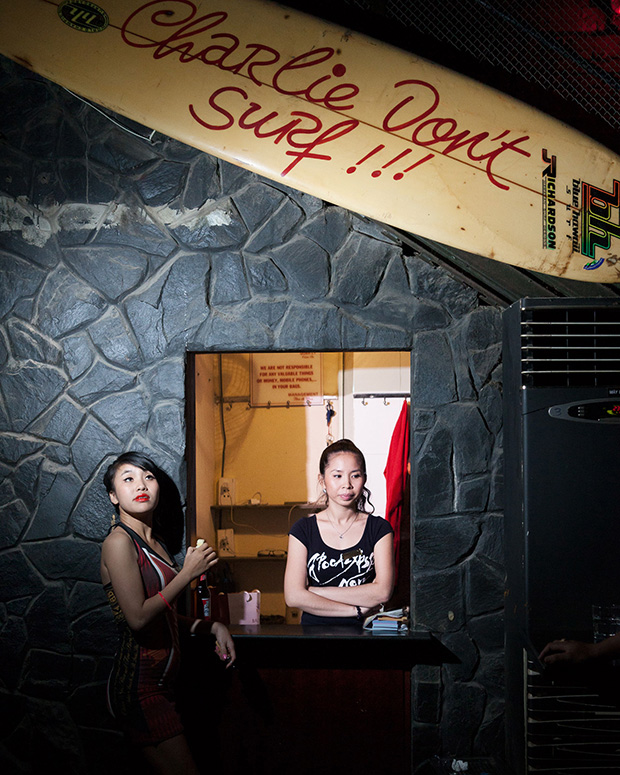 Inside the “Apocalypse Now Bar” in Ho Chi Minh City 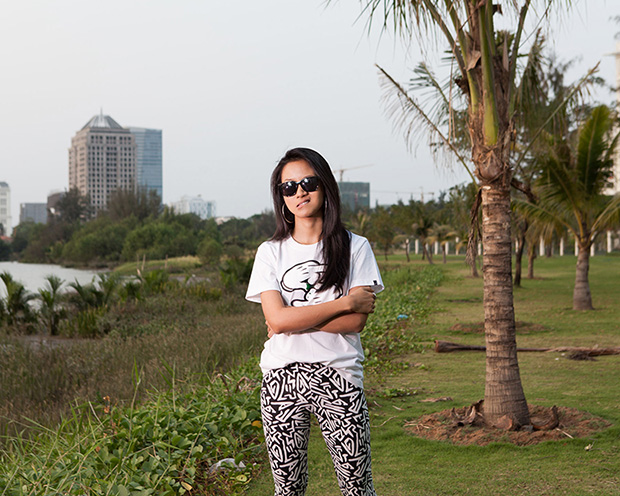 Suboi is a famous vietnamese rapper and pop star. 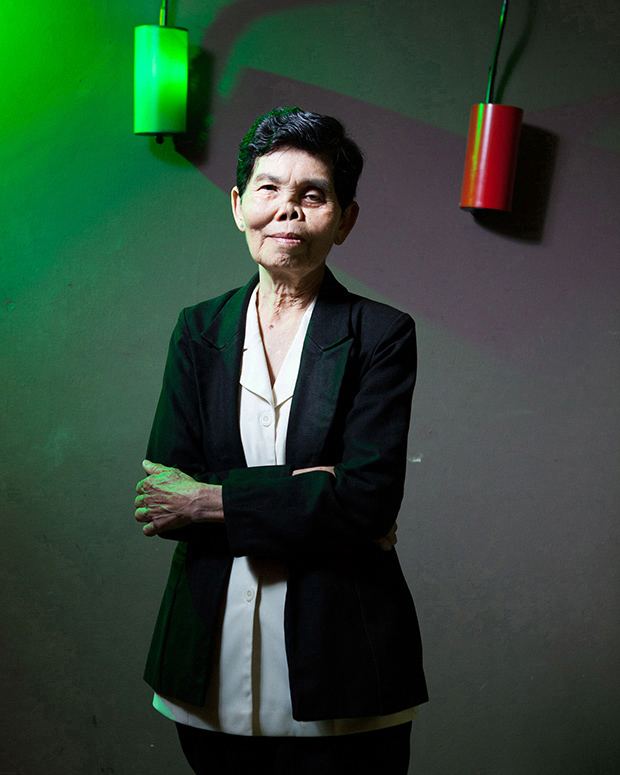 Godmother Huong runs a bar in Ho Chi Minh City named The Godmother. During the war, she fought for the Viet Cong. 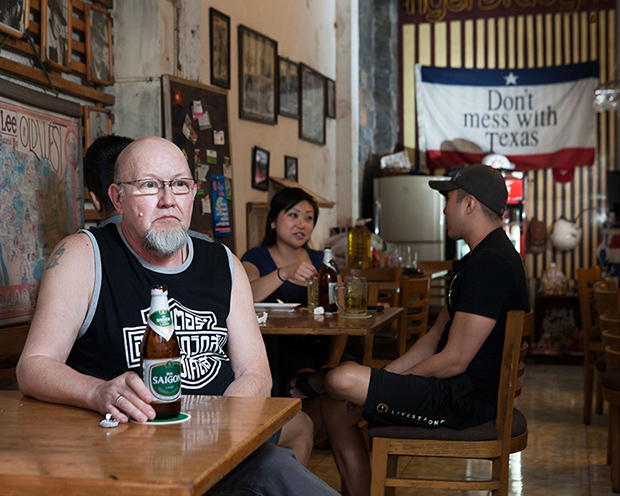 Dash, a Veteran of the US Army in a Texas Burger Bar in Ho-Chi-Minh-City. 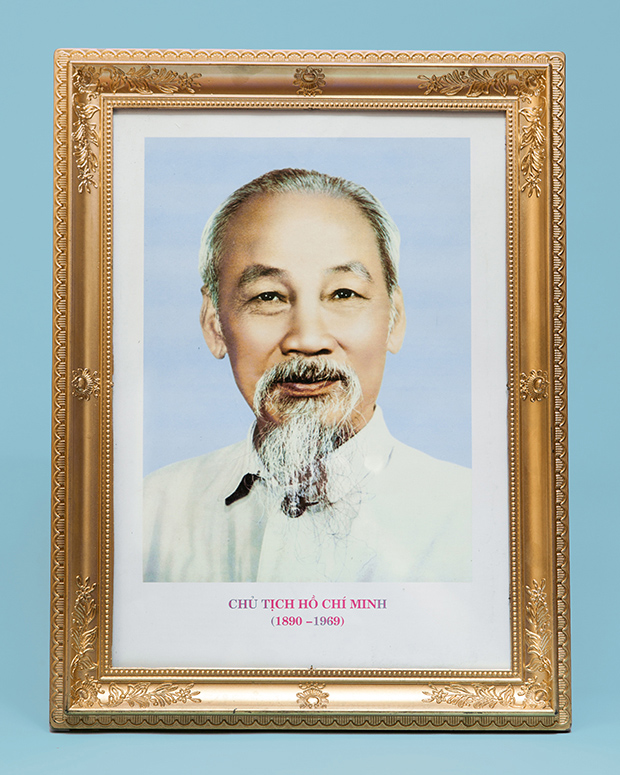 A Portrait of the former leader of Vietnam, Ho-Chi Minh. 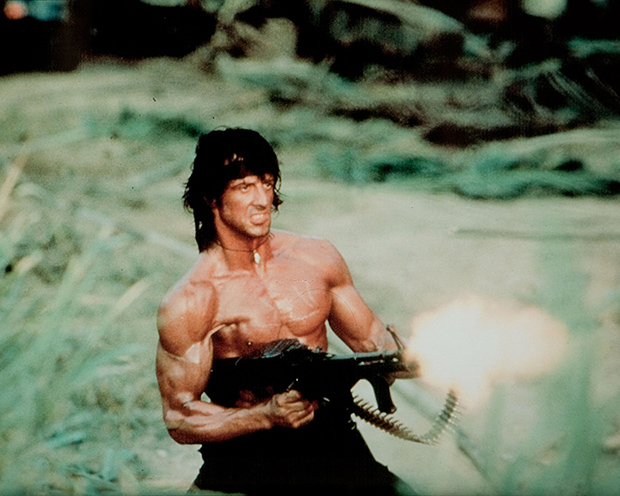 Screenshot of Sylvester Stallone in the movie Rambo. 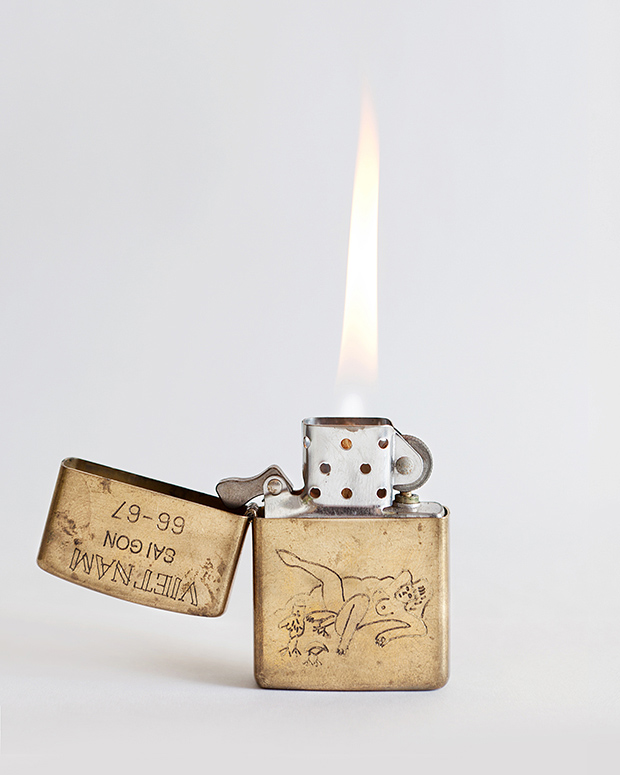 A Zippo sold at a war market in Ho Chi Minh City. 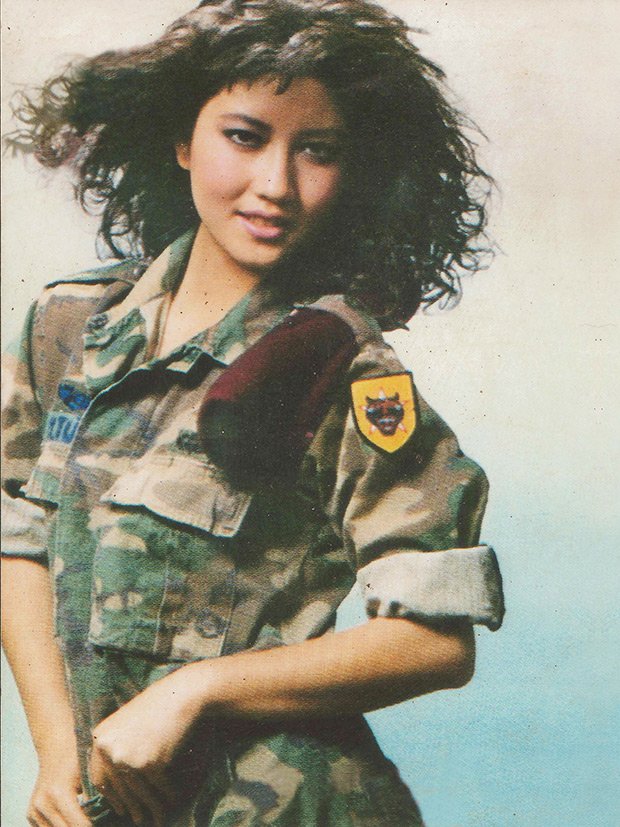 A photo of a women of the South Vietnamese army during the war, sold at a military market in Saigon. 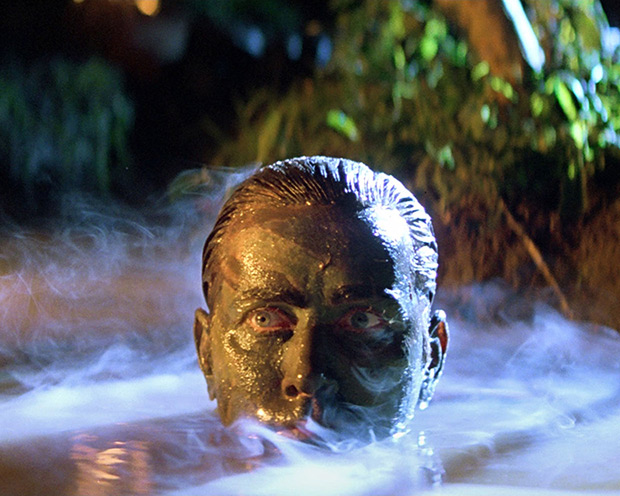 Screenshot of Charlie Sheen in the movie “Apocalypse Now.” 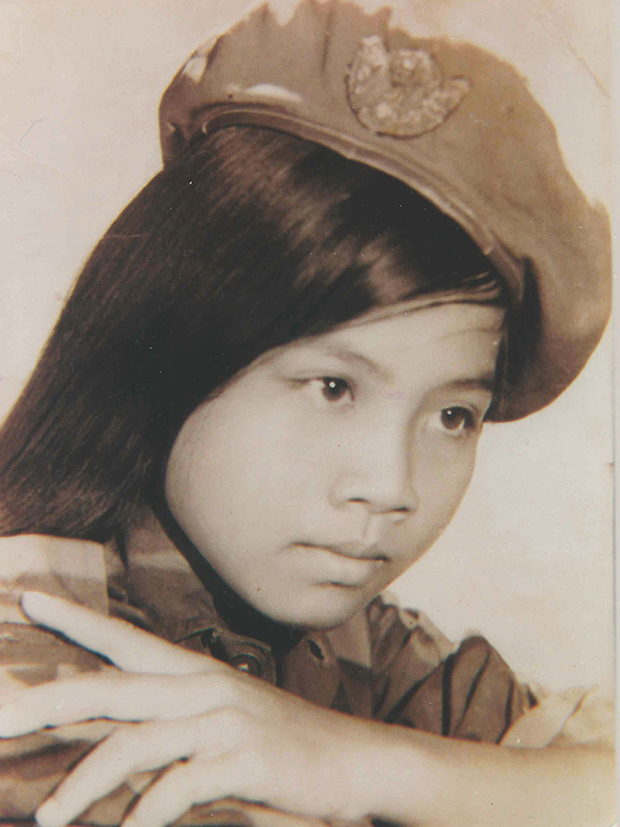 Godmother Huong runs a bar in Ho Chi Minh City named The Godmother. During the war, she fought for the Viet Cong. Here is a photo of her, when she was 16 years old.