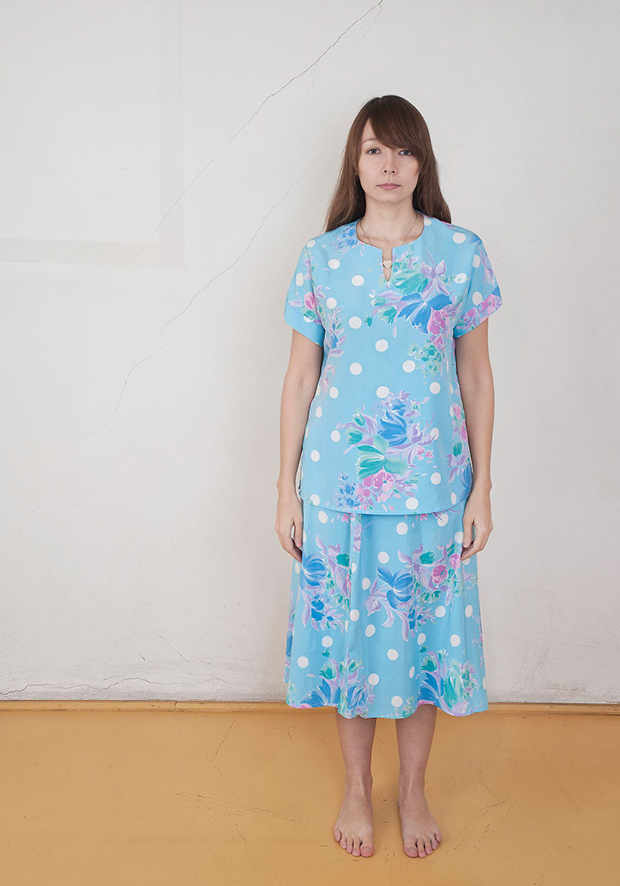 “Holiday” clothes. It’s summer; the intensively bright sun, the smell of freshly brewed coffee and mom’s voice wakes us up. I have a quick peek through the curtains, a line of washing must have been hung outside early in the morning; it looks completely dry. I cannot see anyone, but I know she’s there. I crane my neck, and I am just able to make out blonde locks and cigarette smoke. The morning “gossip” with the neighbors is in full swing. Bare-footed and in pajamas, my sister and I jump out on the balcony and join the discussion. We love summer. We have our mom to ourselves for a whole 2 months of holidays. 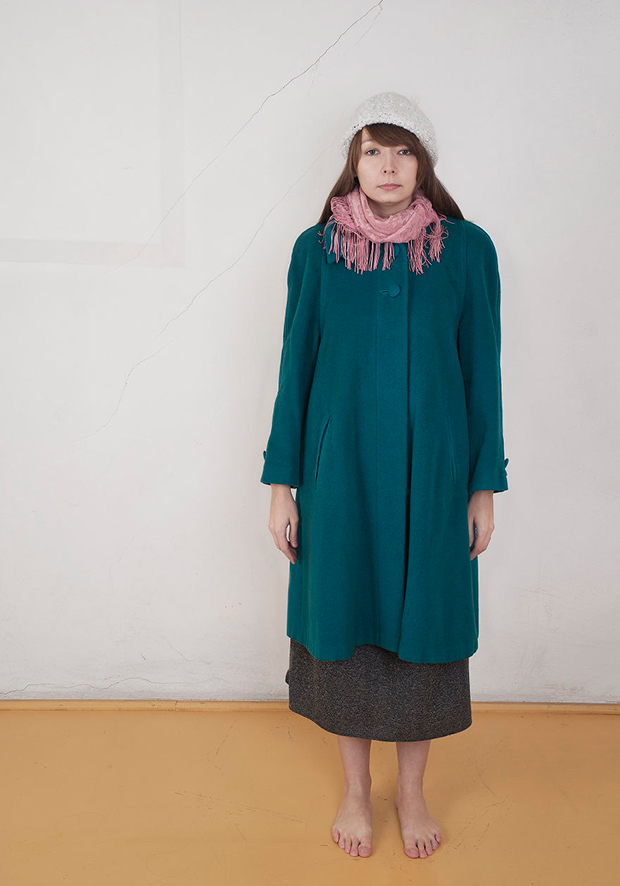 “Winter” clothes. She would leave for work in darkness; we would all be still asleep. She would take a red bus to her work at the music school. We didn’t have a car. Waiting for the bus, bitter cold, the uncertainty whether it would come, shifting from foot to foot. On the way back she would do the shopping. She would move slowly with heavy bags, being careful not to slip. Freezing cold, with a red nose and cheeks, she would enter the house. Every night her soaked black boots would stand in a puddle of melted snow under a radiator in the kitchen.

Polish photographer Karolina Jonderko embarked on Self-portrait with my Mother without any intention of releasing the images. The pictures she made were for herself and for her mother, a way of grieving and way of feeling near to the woman who had raised her and passed away. Four years after losing her mother, Jonderko found her once more by trying on the clothing she left behind.

Self-portrait with my Mother began when the photographer stumbled across a green jacket that had belonged to her mother, a garment on which strands of her hair still clung. Her mother, who played the piano and taught music to children, was unpretentious and unconcerned with fashion. Most of her outfits were passed down to her second-hand, and she almost always wore vibrant colors. After her mother’s death, Jonderko gave her clothing to her grandmother, who wore them as her own for the three years until she herself passed away.

In order retrieve the clothes, the photographer revisited her grandmother’s house, where both she and her mother had spent their childhoods. Now empty, the house was frigid in the dead of February, and yet Jonderko stayed to take her portraits there, dressing and undressing heated only by a set of five electric radiators. At times, her skin turned purple, and yet she persisted, finding that for the first time in a long time she could feel her mother close at hand. When Jonderko shared her portraits with her sister, the latter wept, and together, they collaborated on putting their memories of their mother to paper.

Jonderko began this project, she suggests, out of a feeling that she never really had the chance to say the words, to say goodbye to her mom. When asked what she would say now, however, she refrains from turning back the clock. It’s too painful. “If I could speak to my mother I would have never taken those pictures. We would have had pictures of us together instead,” she explains, although in the most essential sense, that’s exactly what these are. 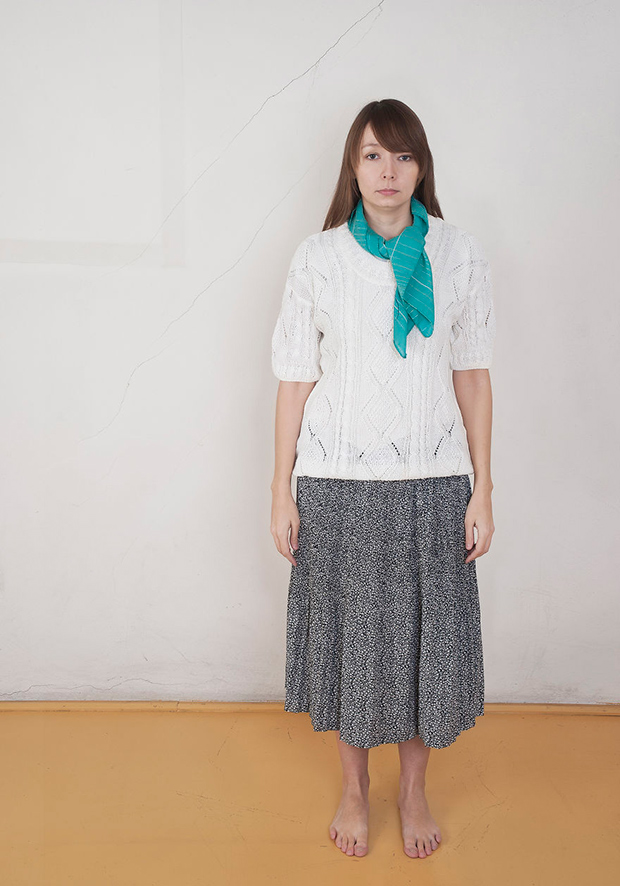 “Home” clothes. I remember her sitting at the piano, focused, her hand tapping the rhythm, patiently listening to the rattle of her students, and I can still hear her gentle voice: let’s repeat this fragment. How was she able to listen to that, I do not know ’til this day. My sister and I would leave the house after few minutes. 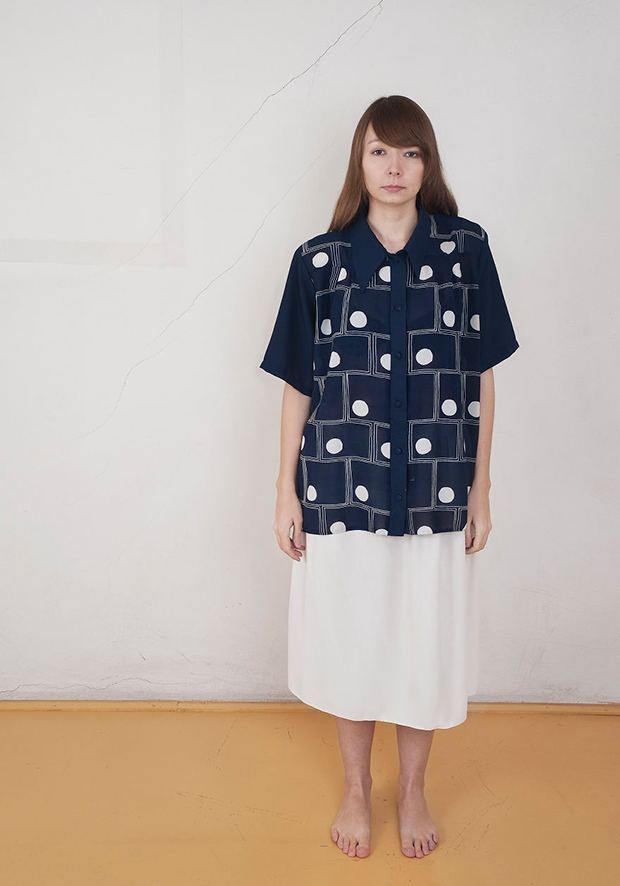 “Kindergarten” clothes. At the coalmine’s kindergarten she would prepare the little ones for many performances. She would teach them songs about beloved mothers, the blackened faces of miners or brave marching Polish soldiers. She knew a song for every occasion. She wore blouses with big geometric patterns for the children. They loved her, the happy plump lady, who with rosy cheeks accompanied their singing on the piano in front of their proud parents. 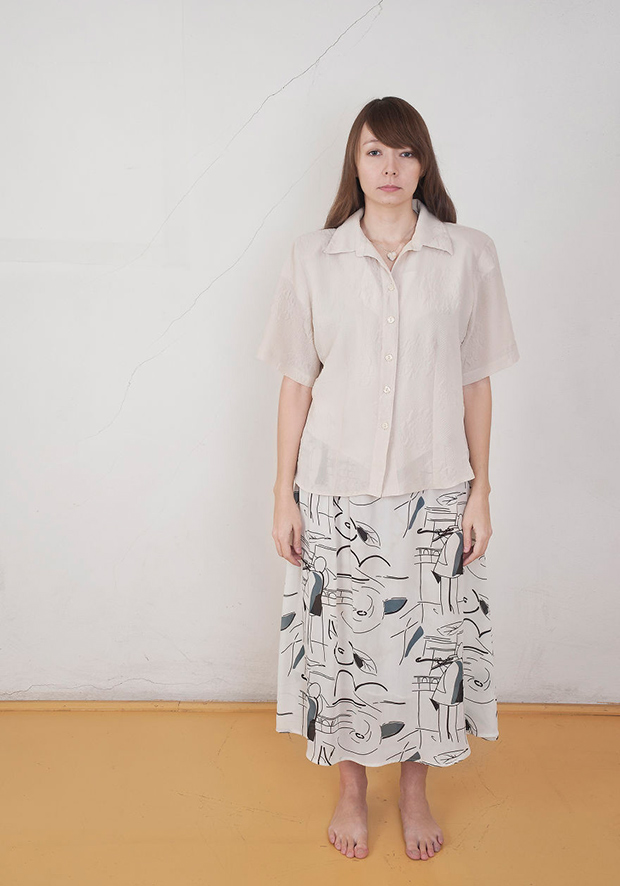 “Work” clothes. Small, badly furnished office in No. 2 Primary School, that both I and my sister attended. On the door “The Principal of After School Activities.” Mum at her desk, writing a report regarding achievements of “Alkatras”(a club for youngsters with problems) and “Orlik” (club for children and teenagers) for a meeting with the town mayor. I’m waiting patiently in the corner; I want to walk home with her. 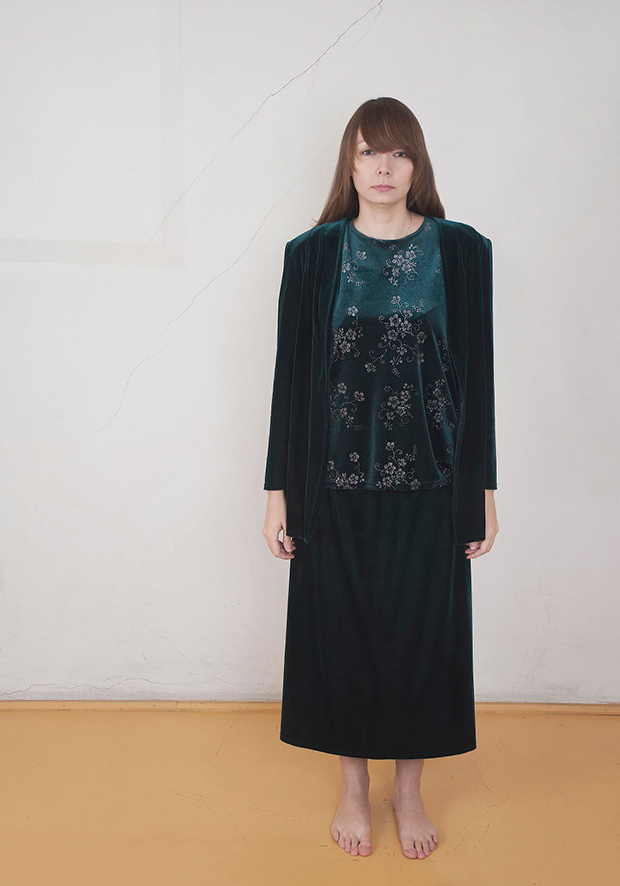 “Christmas” clothes. It’s Christmas Eve, mom bustling in the kitchen, taking golden carp out of oven carefully as not to stain herself with the hot butter. She is even wearing makeup, green, to match the outfit. She’s happy. She loves Christmas. After dinner, she is sitting at the piano and we all are singing Christmas carols. 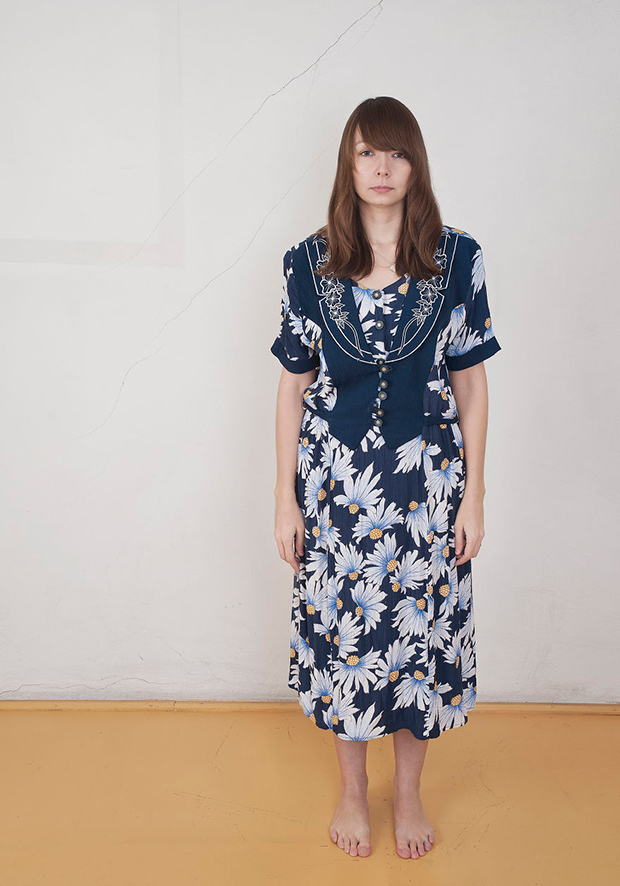 “Weekend” clothes. Sunny day, the whole family sits at my grandmother’s garden, sausages on the grill, twittering birds, laughter, conversation. In this dress, my mother would always be smiling, relaxed. She would wear it only on sunny, free from work days. 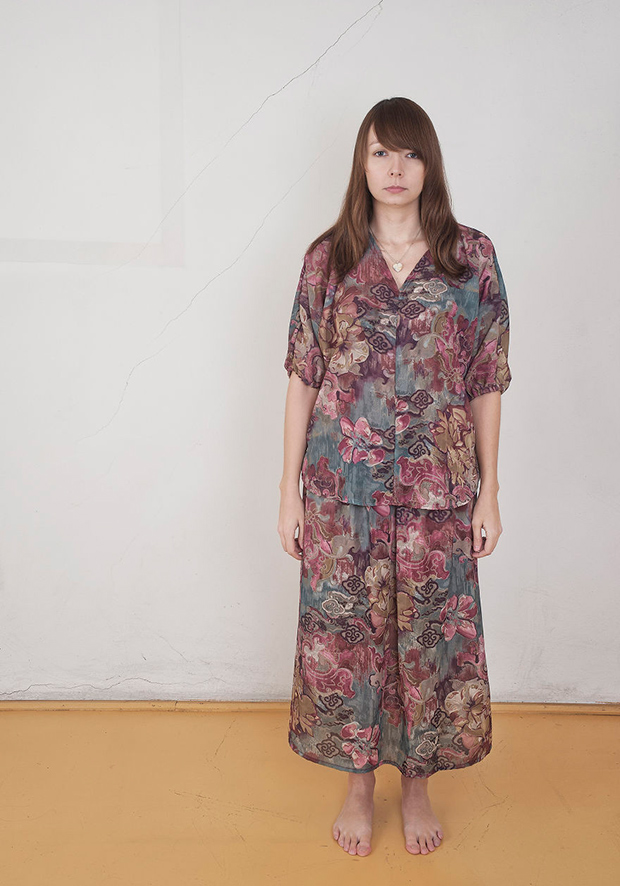 “Wedding” clothes. I am 7 years old, the early nineties, cousin’s wedding, 150 guests; I don’t know most of them. I am stuffing my mouth with a cake while watching my parents dancing to a bad version of Krawczyk’s song. My mother loved to dance and she was good at it. They looked great together, understanding without words. She did not like this type of feast. Chatting with relatives, whom you see only at weddings and funerals. What to talk to them about? It’s much better to dance and send smiles. 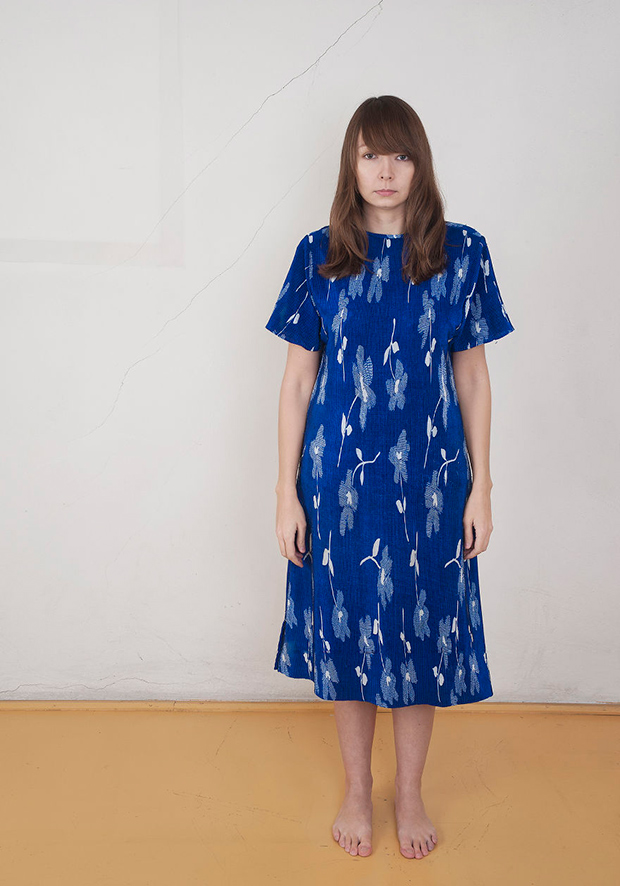 “For the journey” clothes. The departure day. Crowd on the platform. I am clasping my mum’s and sister’s hands. Suddenly I am rising. It’s my mum passing me to my dad through the compartment’s window. I am follwed by two suitcases. My mum and sister somhow join us. It’s crowded and stuffy and like that for the next 14 hours. However, 2 weeks of seaside holidays are a worthwhile prize. Mum has prepared sandwiches, hard-boiled eggs, tomatoes and tea in a ‘Wyborowa’ vodka bottle; we have ‘Happy Minutes’ (a children’s puzzle magazine in communist Poland). She loves the sea. She travels lost in her thoughts, I think she can already smell the sea and hear the waves and screeching seagulls. Her blue dress may be made from cheap material, but it doesn’t crease and dries in 2 minutes – perfect for such journeys.