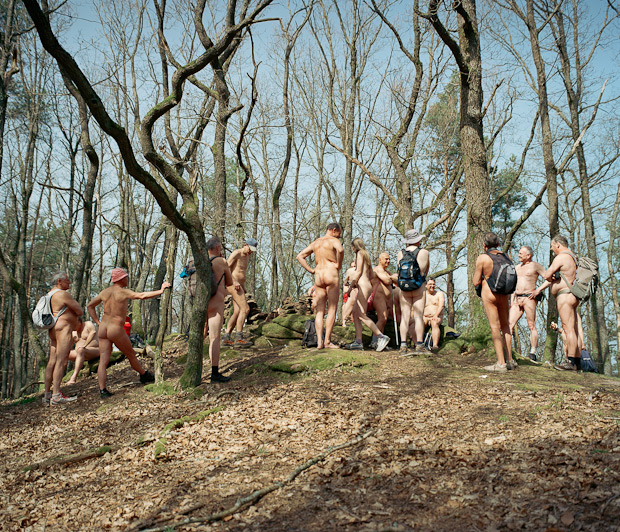 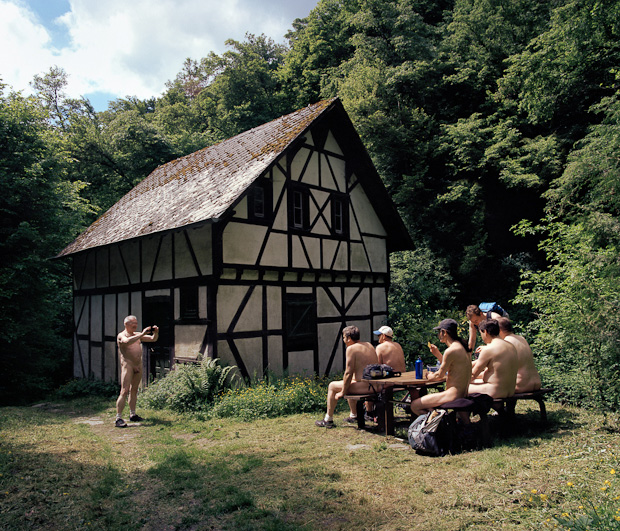 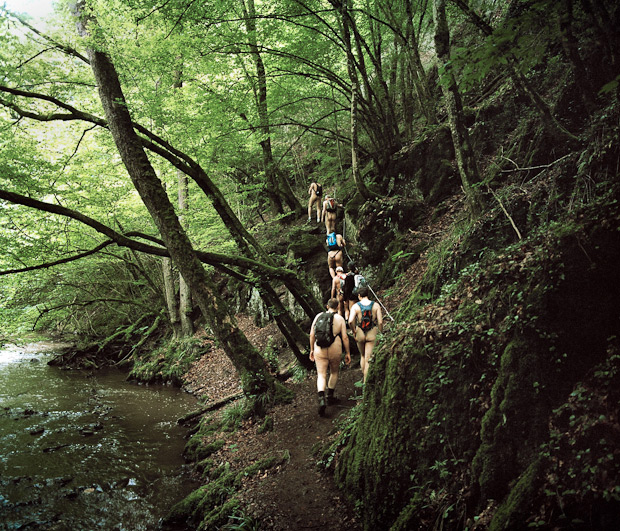 For Die Nacktwanderer, or The Nude Hikers, Lausanne-based photographer Roshan Adhihetty chronicles the adventures of a group of nature-enthusiasts who prefer to backpack in the buff, when their naked bodies can come into intimate contact with the wilderness that surrounds them.

For the photographer, this kind of nakedness, taken entirely outside of the context of sexuality, initially felt thrilling but uncomfortable. When he visited his first nudist beach in Corsica, he was gripped both by the idealism of the Edenic situation and the self-consciousness of being exposed in public. When he heard of the emerging trend of nude hiking, he seized on it, recognizing it as the perfect opportunity to confront his own ambivalence about public nakedness. After digging for about six weeks through online forums and contacting various groups, Adhihetty finally encountered a German hiker who was willing to invite him—and his camera—along on an excursion. About twenty fellow hikers showed up for the trek, but in order to gain the kind of access he did, the photographer himself had to strip down before heading into the woods.

The experience, especially in the beginning, posed some logistical challenges. For one, explains Adhihetty, the entirety of the exposed body must be slathered in sunblock, and hikers who forget to bring a spare pair of undergarments risk being lost in the woods completely naked. Although the routes traveled by nude hikers are generally remote, it’s not infrequently that they come upon troupes of clothed hikers, and the greeting can be awkward. Generally, says the photographer, the uncomfortableness quickly dissipates with a friendly “hello.”

For many, nude hiking grants the opportunity to feel united and bonded with the natural world. These people, stresses Adhihetty, are not radical nonconformists or tree-hugging woodsmen but generally average people with nine-to-five jobs; most bring along their iPhones and the latest tech gadgets on their hikes. For these people, naked backpacking is a chance to unwind, to reconnect with their bodies and the earth. Although most of Adhihetty’s subjects are men, the photographer notes that women make up approximately one fifth of the nude hiking population. Perhaps, he suggests, the female minority is an unfortunate result of the pressures and judgements that our culture places on the female body.

Ultimately, Adhihetty’s images tell a story of a group of people who dare to return to a utopian realm wherein man and the earth exist in harmony. Of course, in contemporary culture, we can never fully surrender ourselves to the natural world, and perhaps we never could, but here the baring of our bodies becomes one way of revisiting the wilderness that lies within us, of being if only for a moment, united with our feral roots. Some hikers, says the photographer, feel that connection so powerfully that they cast off their shoes, threading barefoot along the wooded trails. 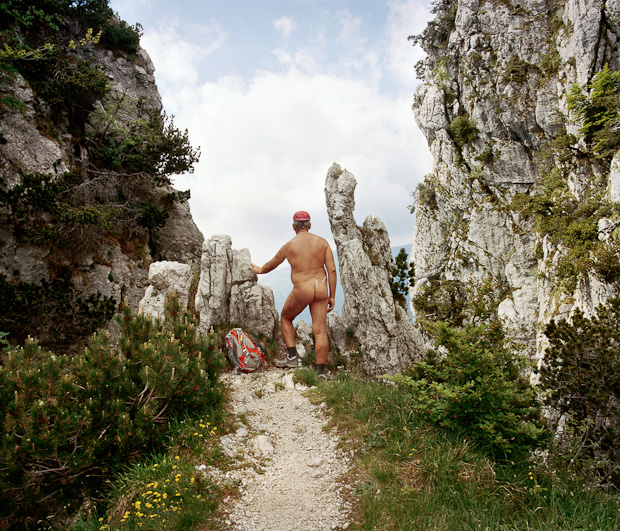 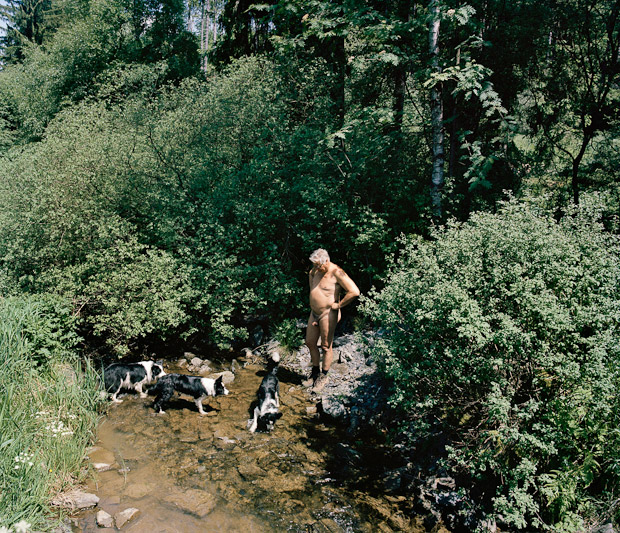 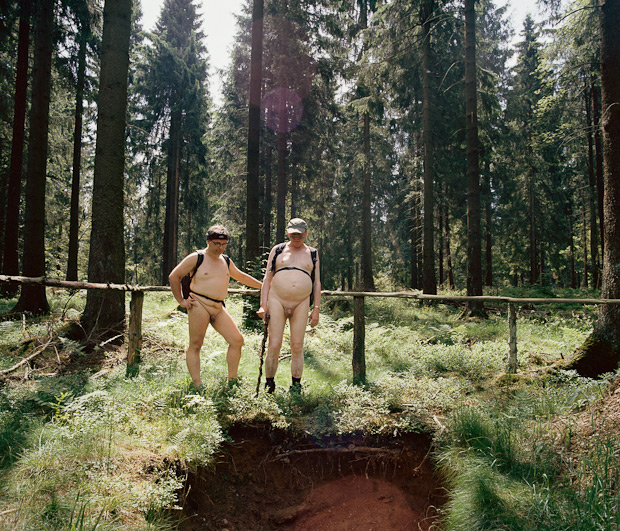 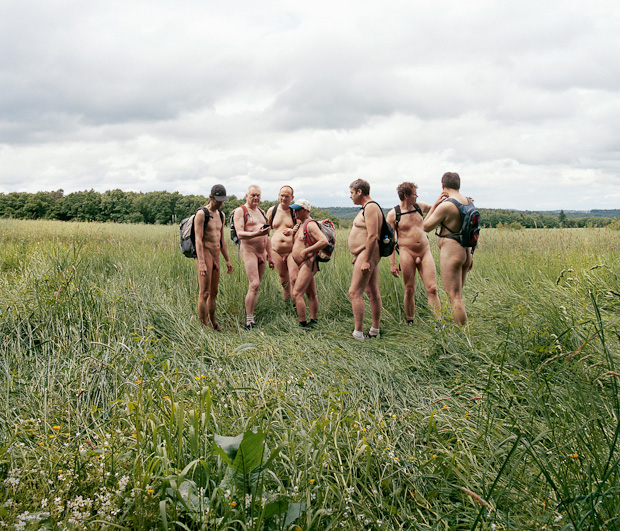 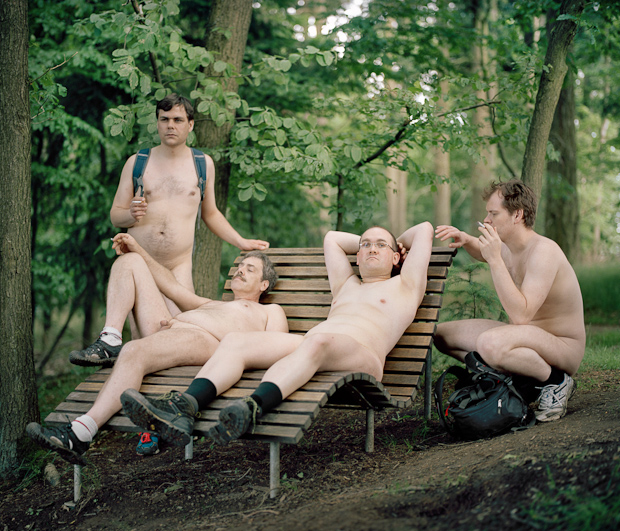 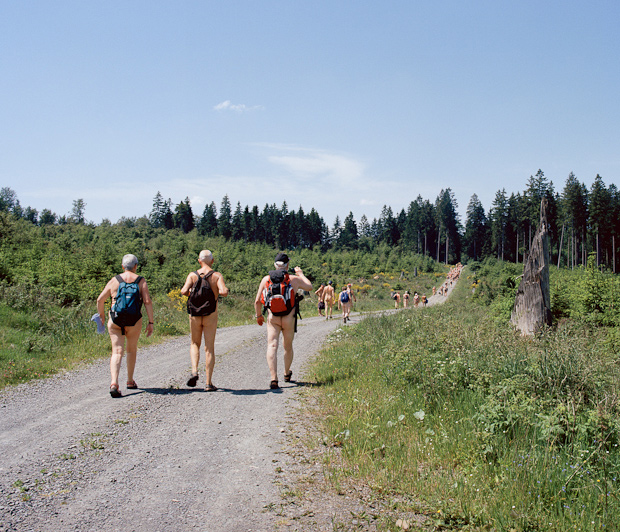