We Asked 13 Photographers: ‘Has there ever been a time when you felt guilty for taking a photograph?’ 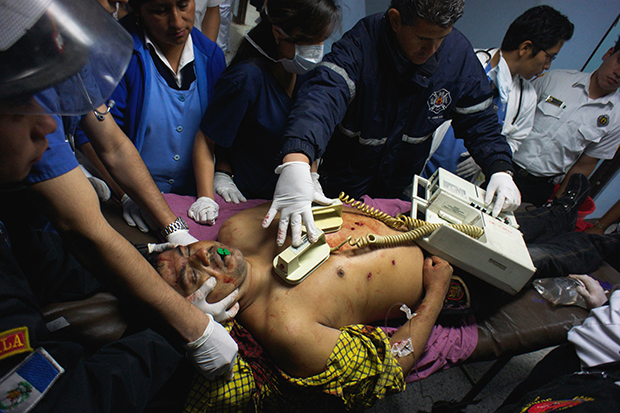 Dr Jorge Chiu tries in vain to save a life of a multiple shooting victim in a hospital in Guatemala City, Guatemala. January 2014′ © Giles Clarke / Getty Images Reportage

Giles Clarke: When I was taking the image above, I had the victims daughter screaming just behind me watching her father die…that was tough and I felt a little guilty at the time but that’s not something I can think about too often..

Brett Gundlock: Covering some of the violence here in Mexico, yes. Funerals are always very difficult for me. I have lost some close family recently, so I can get a little soft at times. I am never really 100% welcome at these events, so I do generally really feel pretty guilty about hovering over someone going through a pretty shitty time. But I remind myself that my reasons for being there are honest. I am sure the people I am shooting would appreciate my intentions if I had the chance to explain myself.

Irina Popova: Yes. Basically, I feel guilty most of the time – not only for taking photographs, but for being alive, eating, sleeping, looking, etc. That’s why I try to become better and establish better communication about what I’m doing and why. I feel secretly guilty for photographing my mom washing my granny in a miserable bathroom of a hospital, when my granny was practically disabled. I was making a film about her, with an interview as a main part, where she was telling how beautiful she was and how all the men were after her and how she suffered all her life for loving the wrong one… I never finished the film and never used the images in the bathroom, and am not sure I will.

Noah Rabinowitz: I’ve never felt guilt in making an image, only its distribution. Context is paramount to image-based communication. The more age, experience and perspective I accumulate, the more thought I put into the implications about every image I put out into the world.

Zed Nelson: I often feel guilty taking photographs – it’s a strange thing to do. One image comes to mind – when I was making my book “Love Me.” I was backstage at the Miss England beauty competition. I had observed Miss Essex all day, as she seemed most competitive and focused on winning. As they announced the winner I watched her, and her name wasn’t called. She became utterly hysterical, tearful, screaming, totally beside herself. Mascara was streaming down her face, and she was sobbing. I walked slowly towards her, preparing to take a photograph. I didn’t want to do it. I felt guilty, but I wanted the image for my book.

Joan Lobis Brown: Yes. Two weeks ago, I was supposed to be photographing homeless LBGT youth taking refuge from the bitter cold, sleeping on the floor of a room where they meet and are able to get meals several times a week. It is not a shelter, and they were sleeping on donated blankets and pillows all in a line along the wall, right on the floor. One of the kids asked me not to take his picture. He looked like anybody else I might see in NYC. He was clean-shaven, wearing a navy cloth coat and jeans. I could only imagine that he didn’t want anyone from his past or present to see him. I could have taken his picture in a way where I tried to prevent his face from being recognized. But I didn’t take his picture at all. Some people may say I missed an opportunity, but I think I did the right thing.

Brooke Frederick: I try to document a environment without effecting or changing anything within the scene. This is hard sometimes because there are situations where you want to “fix” something or help someone. I always try to keep in mind where the photos are going to end up and put myself in the position of my subjects.

Juan Madrid: Not really. I usually talk to anyone I photograph, so I can get to know them before actually making a photo. I had someone in NYC confront me once when I didn’t ask permission but his face wasn’t visible and I didn’t get a chance to make the image anyway – he sensed me almost immediately and turned around. But that particular situation didn’t leave me feeling guilty.

Tom Jamieson: No, I think if your morals and ethics are in the right place, you don’t feel guilty taking pictures. I always try to be respectful to whoever I’m photographing and show them what I’m doing. I think if I felt like I was stealing something when I take photos, I don’t think I’d be able to do what I do.

Anthony S. Karen: No, because I’d never compromise my morals to the point of being in that position. If in question, I’m more of the type to put my camera down altogether (and have). 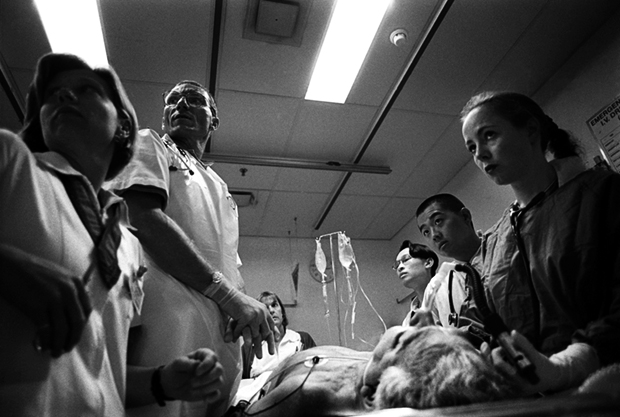 A group of emergence staff at Royal Perth Hospital watch monitors to see if there is any sign of life, the team have been trying to restitute an elder man for 30 min, he was admitted to hospital after collapsing at home, the man was pronounced dead 2 mins after this photo was taken. 1997 Perth, Western Australia © Patrick Brown

Patrick Brown: Not really, but there has been times when I’ve felt it was wrong to take a photo. Early on in my career, I worked on a self-funded project about the busiest hospital in Western Australia, Royal Perth Hospital. The Hospital gave me unprecedented access to all aspects of the hospital – I hadn’t long started the project when I was in the cardiology unit one evening when an elderly lady was dying. She had lost consciousness, and her body was taking the very last breaths. I didn’t take one photo. It sounds very strange to talk about this so many years later; however, I saw death for the first time. It didn’t scare me, but I did realise that the body is just a vehicle. I felt guilty afterwords for watching this very private event happen. The doctors and the nurses never once asked me to leave the room or told me I couldn’t take photos, but it felt wrong for me to do so. A form of guilt, I suppose.