We Asked 10 Photographers: Has There Ever Been a Time When You Regretted Not Taking a Photograph? 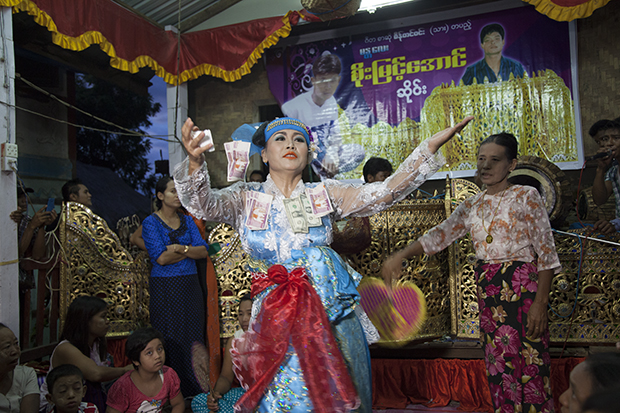 Mariette Pathy Allen: Yes, many times! Sometimes the camera wasn’t ready, sometimes I just wasn’t fast enough, sometimes I was too shy. Just recently I was in Myanmar photographing “Spirit Mediums”-people who were possessed by spirits. I had confusing moments when I didn’t know if I was allowed to shoot or not, and missed some great moments.

Giles Clarke: Many times…too many times to mention. Usually everyday when I get home from a day out, I think about something, or angle or situation that I could have done better. I am in Haiti as I write this and was at a protest yesterday in downtown Port-au-Prince. A few local press and I were following a man being dragged away toward a police pick-up truck where they began beating him. When the beating started, I picked up my camera and the cops began screaming at me..so I stopped shooting and turned around a walked away… I kicked myself after, as I felt that I’d been intimidated successfully, which was annoying to say the least.

The other time was many years ago, the last time I saw my grandfather. I had just been given my camera – an Olympus OM2. I always regret not taking his picture that day…because it was the first day I had a camera…and the last day I saw him.

Brett Gundlock: Yes, daily. I live in Mexico City, so I am seeing photos constantly. I carry a small film point and shoot camera religiously, but I still have to be in a pretty daring mood to jump in front of a stranger like some crazed gonzo tourist. But that being said, I know that if I am not comfortable shooting and I force it, it is not going to work out. When I am shooting my projects, I have a general rule of not taking a photo until I know the person’s name. I think the biggest strength of my photography is the connection between the subject and me, the camera and actual photo is just a formality. So yeah- I don’t really stress about this. If it is meant to be, it will happen again and probably be better.

Jeffrey Stockbridge: I remember standing on the side of the road in the middle of nowhere Texas, putting on my rain gear looking back at my motorcycle idling as a storm was coming across the plains. I put my Hasselblad to my face, and I looked through the lens as a bolt of lighting struck the earth in front of me. I missed the shot. It would have made a striking photograph (literally), but I don’t regret missing it. There have been moments when I could have taken a photograph but chose not to and there have been moments when I wanted to make a photograph but I missed it or was just so caught up in the moment that I wasn’t able to. Sometimes the world in front of me arranges itself in a perfect way. If I’m not photographing it, it’s no big deal, because I’m still right there at that moment in time seeing it with my own eyes.

Brooke Frederick: YES, there have been many times I hesitated and missed the moment, didn’t approach a person, or did not pull over to shoot something. It haunts you. Its really important to remember that feeling so you don’t let yourself do it again.

Ricky Rhodes: I really regret not photographing my father while he had cancer. It was too hard on him to have his photograph taken. He didn’t even recognize himself in the photographs because his health had diminished so much in such a short period. It made him very uneasy to have his photograph taken because ultimately he knew that I was taking his photo because he was going to pass away soon. I have a few nice portraits of him that I really cherish but I really regret not having more photographs of him.

Joan Lobis Brown: Absolutely! When I am in my regular life with a relative or friend and I don’t have my camera. Then I use my cell phone. I used to wish I had a better camera with me. It’s much less of a problem than it used to be.

Juan Madrid: Not many, but one series of possible photographs in particular. I was in Flint, MI. walking around and saw a man undressing and urinating at one end of an abandoned lot. It was pretty close to the golden hour and he was right near a bunch of trees with this beautiful light shining through. I didn’t make a photograph because I wasn’t sure how intoxicated he was and didn’t want to draw his attention to me by getting close enough to make the photo. He fell down trying to get his clothes back on, so I followed him from a distance as he made his way down the street. I somehow lost him and kept walking before heading back up the street, where I saw him sit up on the sidewalk – he had fallen again. I wasn’t quick enough with my camera for that but continued to follow him down the street, where he proceeded to get confrontational with a homeless man. They ended up fighting, with the drunk man pulling out a knife but getting knocked to the ground fairly quickly by the homeless man, who then kicked him in the head a few times, which bloodied him up.

Tom Jamieson: Always. There’s always missed pictures, situations you are intimidated by or manage to talk yourself out of. It’s something every photographer experiences and gives themselves a hard time about after. It’s something I’m definitely getting better at and something I think improves as you experience more of the world and just generally by taking more pictures.

Natalie Keyssar: Actually, no. I’m sort of surprised to scan my memory and find that I don’t have any regrets in that area- but I can’t think of any. The times I’ve chosen not to make a picture were usually because photographing would have been hurtful to someone, either in terms of physical safety, or emotionally, and I’m a pretty big believer in the idea that the moments we choose not to click the shutter, maybe because we think the picture would be exploitative or would put someone at risk, are one of the things that define us as photographers. There’s a whole lot of pressure out there to get your picture no matter what, and I understand that, but I have a lot of respect for the shooters that know when to let their camera hang on its strap and be a person for a second.