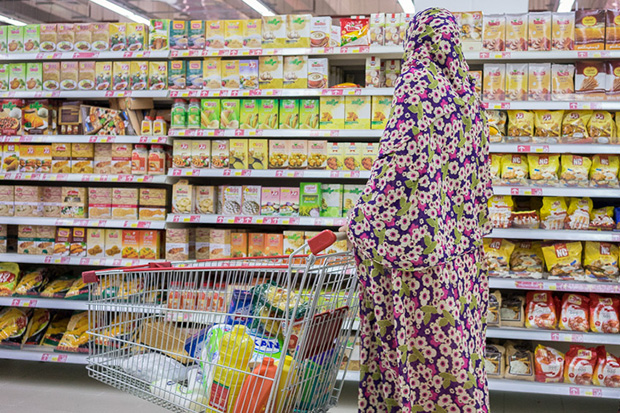 For Iran’s Booming Consumer Culture, Cambodia-based photographer Thomas Cristofoletti traces the rapid growth of commercialist ideologies within the theocratic state. Here, Cristofoletti presents a resounding counterpoint to a controversial statement made in Cuba by Mahmoud Ahmadinejad in 2012, in which the former president of Iran predicted the impending decline of capitalism, a system that he suggested was at the core of global unrest.

In picturing the widespread use of popular Western products and technologies by young Iranian men and women, Cristofoletti challenges a vision of the country as one that is oppressed, censored, and dominated by faulty internet connections. Despite international trade sanctions, products are often smuggled into Iran and sold to those who can afford their steep prices. Large-scale shopping malls and markets are slowly replacing the long-standing bazaars that cater to a more traditional crowd.

For women in particular, Cristofoletti explains, buying into consumerism by purchasing expensive beauty products can become a quiet route of defiance in a culture that limits much of their behaviors. As Iran faces the possibility of lifted sanctions, Cristofoletti compares the country to a lion on the verge of waking, an economic beast on the cusp of unqualified global success.