Desolate Photos of the 7th Most Polluted City in the World 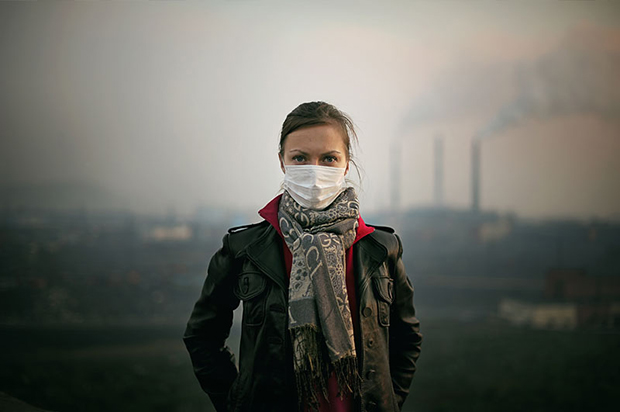 During summer, air is more polluted. The difference of temperature in the various atmospheric layers prevents the evacuation of smoke, a nauseating smog invading the streets of Norilsk. This condition is further aggravated by factories positioned exactly opposite one another, where wind in any direction blows exhaust through the city. 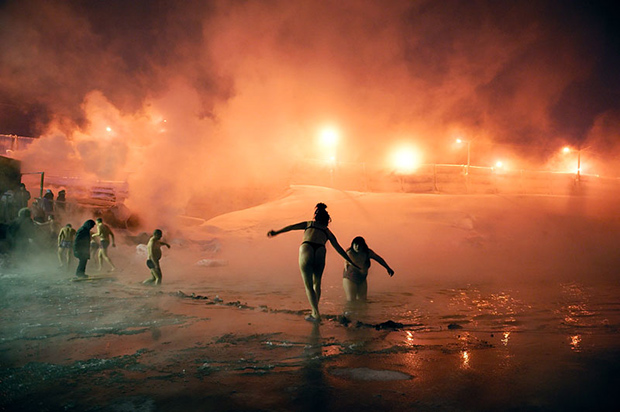 Norilsk has a “Warlus” club and its main activity is swimming in ice-holes. The outside temperature doesn’t matter. The colder it is, the more people seem to gather, even when the temperature is -40 with wind. Afterwards, people can warm themselves in small banyas (saunas) that are situated on the edge of the lake and are heated with the steam from the power plant.

Elena Chernyshova‘s Days of Night – Nights of Day is the story of Norilsk, Russia, a city of 170,000 residents, isolated from the rest of the world and shrouded in a thick pollution of mines and factories. Four hundred miles north of the polar circle and 3000 km from Moscow, the community has no outgoing roads and is only accessible by plane. Listed as the 7th most polluted city in the world, Norilsk has an extremely low life expectation and its populace abounds with cancer, respiratory disease and depression.

The region has been famous for its rich deposits for centuries, the Putorana Mountains offering untold amounts of nickel, copper and cobalt. In the 1930s, the USSR built up the mining city and factories on the labor of the prisoners of Gulag, thousands losing their lives in the treacherous conditions and frigid temperatures. The city now produces 300,000 tons of nickel a year, feeding 96% of Russia’s nickel consumption as well as 17% of the world at large. With 2 million tons of gas expelled into Norilsk’s atmosphere annually and temperatures plummeting to unimaginable conditions, the people of this desolate tundra live a dangerous and lonely existence. It is in this apocalyptic atmosphere that Chernyshova seeks out an incredibly human story, her images flooded with the ominous power of the polluted landscape and the souls surviving against all odds in its magnitude. 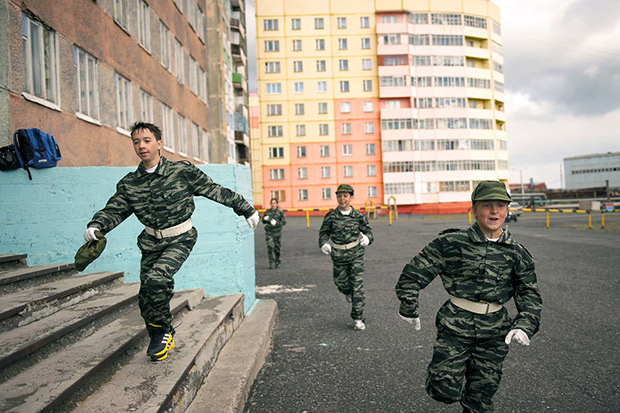 During summer holidays, the majority of children are sent to their grandparents living in the “mainland” or forwarded to children’s camps in other regions of Russia. Many parents do not have an opportunity to send their children elsewhere and they have to spend their holidays in Norilsk. The administration organizes children’s camps inside the school buildings in the middle of the city. One of these children’s camps has a military-patriotic education and is organized with the participation of Cossacks. 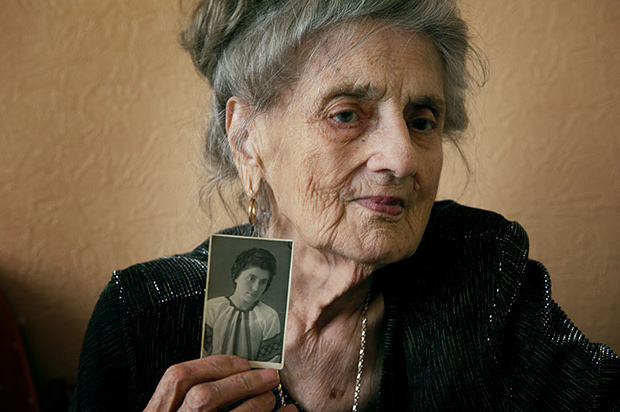 Anna Vasilievna Bigus is 88 years old and spent 10 years of her youth in the Gulag prison. Separated from her family, she was sent at the age of 19 above the polar circle from her native village in the Western part of Ukraine. She survived the German invasion of her village area only to be considered by the Soviets as a collaborator of the German army.

During her imprisonment she participated in the construction of buildings along the Lenin Avenue, the main street of Norilsk. After her liberation at the age of 29, Anna Vasilievna was alone in the city. She lost everything in Ukraine and had no other place to go to. Vasilievna says during her years in Gulag, “The only joy we could have in Gulag was singing. We sang a lot. And this gave us the will to survive…”

Her daughter became teacher of music and her grandchildren sing in opera and play in a rock group. Anna Vasilievna died the 30th of October 2012, the day of victims of political repressions in Russia. 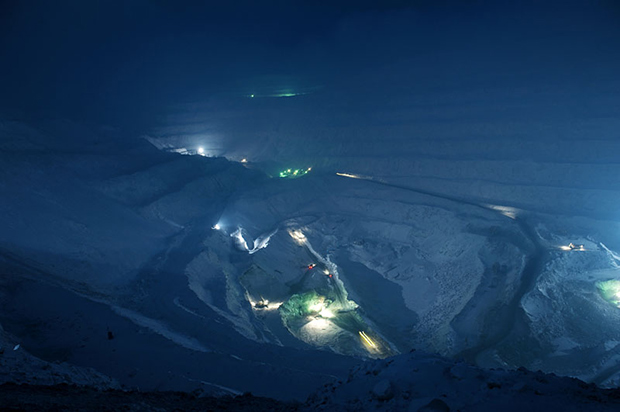 The open mine “Medvejii Ruchei”. Norilsk is situated on the Siberian western plateau at the foot of the Putorana Mountains culminating at 1700 meters above the sea level. The region has the largest deposits of nickel, copper and palladium in the world, formed about 250 million years ago.
The company “Norilsk Nickel” is the world’s leader in the production of palladium and platinum, totaling 2% of the GDP in Russia. Despite the harsh climate, with temperatures of -50 and frequent snowstorms, the mine is open 24/7 throughout the year. 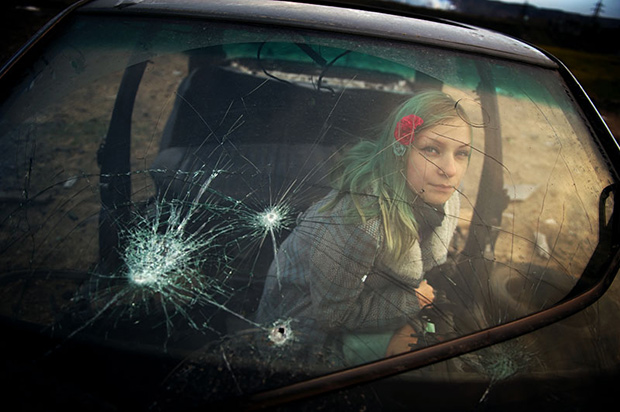 People appropriate industrial zones for their leisure and recreation. 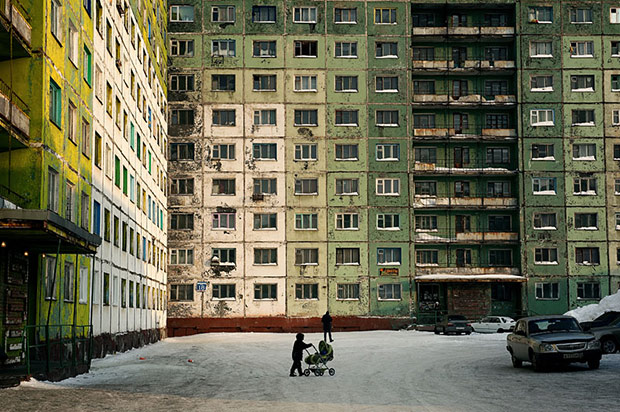 The next step of Norilsk’s construction was in 60s, and followed the widespread system in USSR of constructing the buildings with pre-built panels. 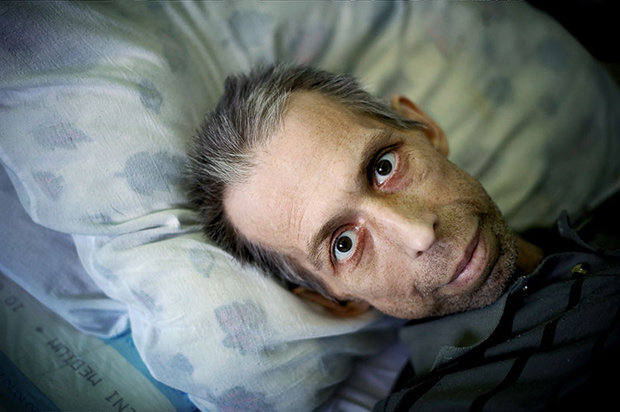 Life expectancy is ten years less than the average Russian, which is already only 60 years of age. Mining emissions provoke lung disease, respiratory and digestive issues, and can cause cancer. Some studies show that the air quality is responsible for 37% of children’s deaths and 21.6% of adults’ death. The cancer risk in Norilsk is two times greater than in the rest of the country. 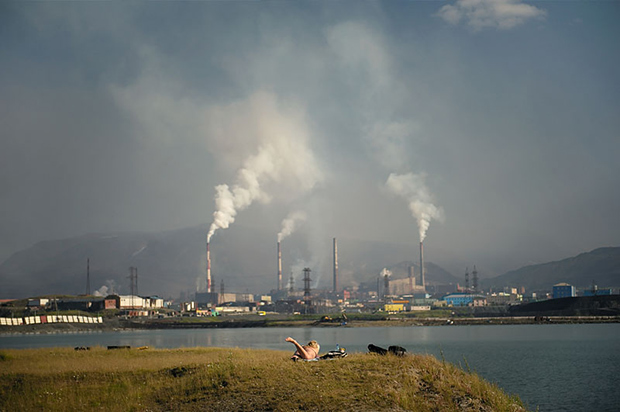 There are few green spaces in the Norilsk where one can escape. Inhabitants must go 30 km by bus and take a long walk to reach true nature. Lack of time causes people to enjoy the sun and heat in the urban areas of the city.

Dolgoe Lake lies at the foot of Norilsk and separates the industrial area from the city. During the initial design of the city, architects imagined a large park and a recreation area along the lake. The development of this area was never completed, forcing people to use industrial zones for their leisure and recreation. Picnics, barbecues, sunbathing, swimming are organized. 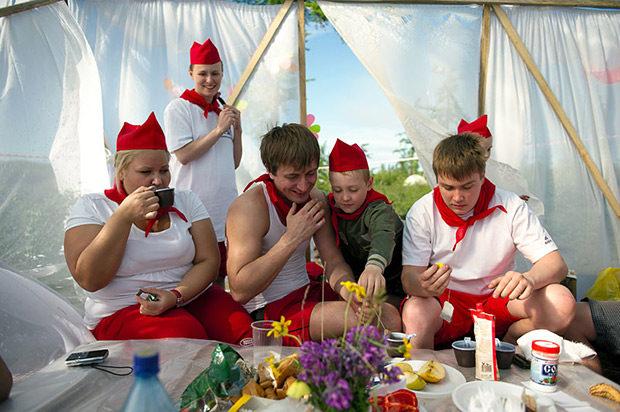 Each year, the inhabitants of Norilsk celebrate the arrival of summer with joy, synonymous with outdoor activity and sun. A 3 day meeting is organized in the tundra, during which various competitions are held – canoeing, climbing, etc. Each team has its own motto, anthem and outfit. The photo shows the team “Pioneer of Our Era”, taking its breakfast before a day of competition. 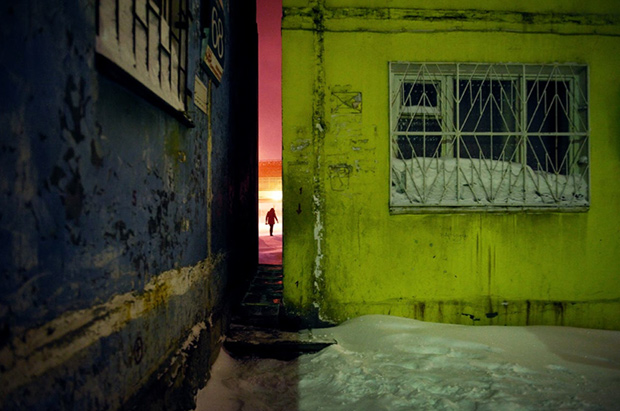 Architects created an urban space that could protect the inhabitants from the violent winds. Buildings are grouped together to form enclosed courtyards. To ensure a good circulation and avoid long bypasses, architects designed very narrow passages in between structures. 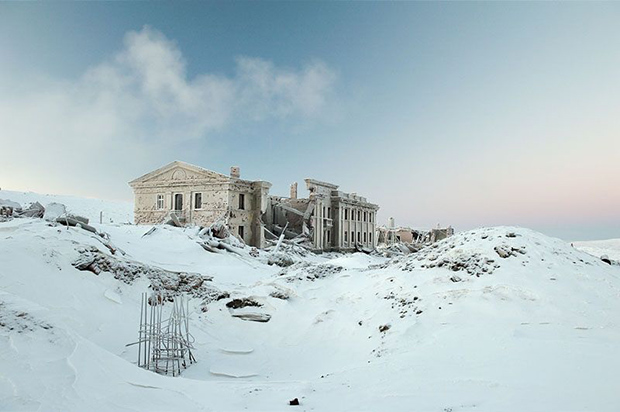 This photo is the ruins of the house of Culture in the settlement “Medvejii rucjei”. The settlement was one of the first habitations of Norilsk and was constructed on the part of Gulag in 1956 just near the open mine “Medvejii ruchei”. In the 90s, this settlement was closed due to maintenance difficulties and the complexity of its infrastructure. Its inhabitants were moved into new quarters of Norilsk. 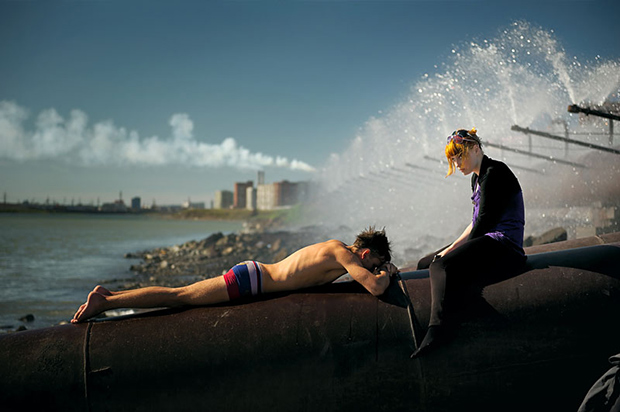 Young people here have only one desire – to leave the city. They do everything to integrate into a high school on the “mainland” and then find work there. This is a trend among young people living in harsh conditions. The severe climate, the problematic ecological situation, a serious lack of diverse places to go out to have a full cultural life and a sense of isolation all come into play. There are few options for those not working in metallurgy. “We cannot even leave for the weekend in another city just to exchange ideas and meet other people.” 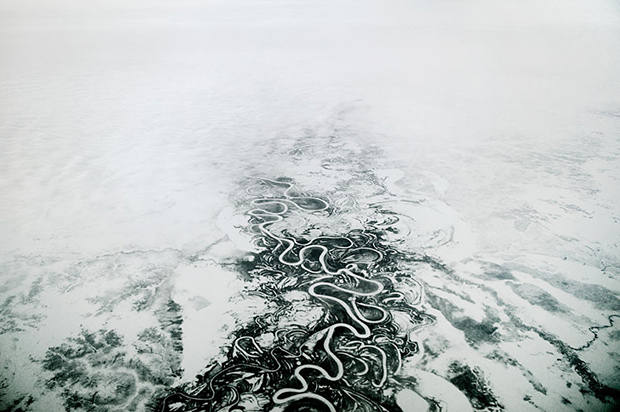 Lost in the middle of tundra in 400 km on the North of the polar circle, Norilsk has no ground transport connections with the rest of the world. Only waterways and airways allow the life to be attached to the rest of Russia. Inhabitants call the rest of the world a continent. In the summer from June to September, the Yenisei River is open for navigation and gives a link between Norilsk and Krasnoyarsk. During the time of Stalin this perilous road leading to the Gulag of Norilsk was called a “road of death”. 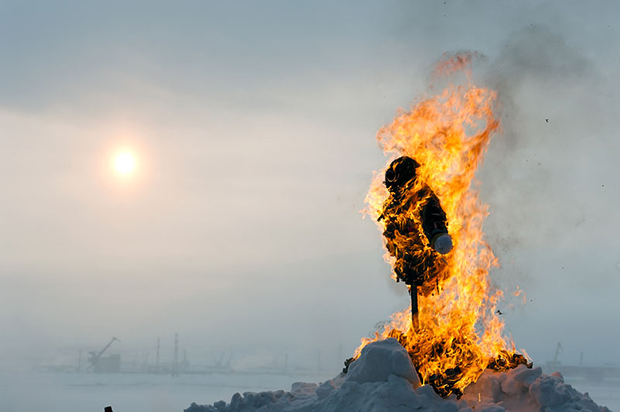 For the holiday of Shrovetide, Russian tradition is to burn a scarecrow representing winter and to welcome spring. For the city of Norilsk, where winter lasts 9 months, this tradition has a sense of welcome light and sunny days. This festival takes place in March but the Norilsk people will wait again 2-3 months before the arrival of true spring.