The Brutal Beauty of Life in an Arctic Mining Town 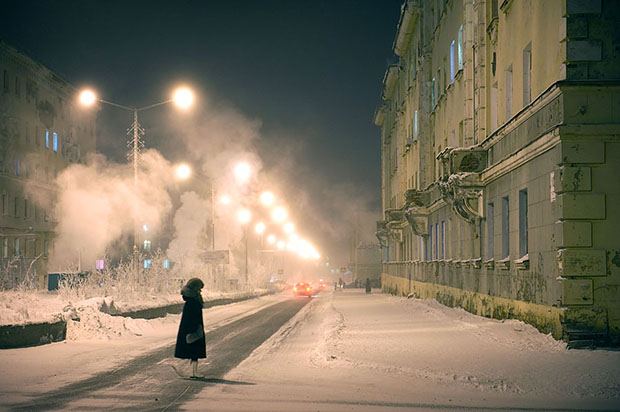 Norilsk winters are long and cold, with an average temperature of around -31°C in January. The result is many days of ice, coupled with violent winds. The cold period extends to around 280 days per year, with more than 130 days with snowstorms. It’s worth noting that actual temperatures are even colder when the effect of the wind is taken into account. For example, for a temperature lower than -40°C, a wind of 1 metre per second can make it feel like -42°C. 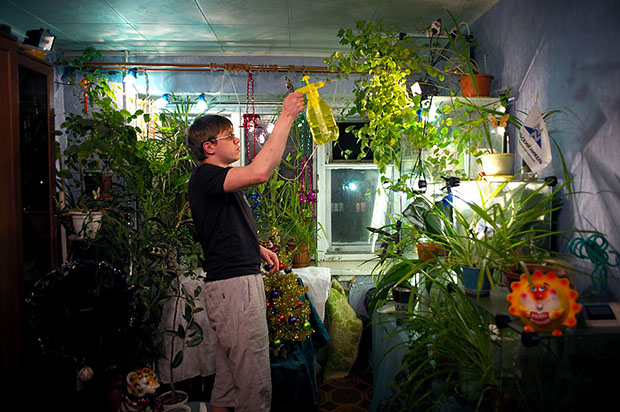 The lack of greenery during the 9 month winter, and green spaces during the summer, leads people to create green spaces in their apartments, constructing a natural microclimate which contradicts the severity of winter and offers a visual escape.

Norilsk is the world’s northernmost city, as well as its largest mining complex. A town of 175,000 people in the extreme North of Russia, situated above the Arctic Circle, it is a place of extreme conditions: with temperatures reaching -60 in a winter that lasts nine months, two months of which are spent entirely without sunlight, its inhabitants are living at the margins of survival. The city can only be accessed by plane – there are no roads leading towards or away from it. Elena Chernyshova travelled to this Arctic city, spending time photographing its inhabitants in order to discover the ways they have adapted to their circumstance’s harshness.

Photographing with a digital camera, Chernyshova found the process to be largely spontaneous. She enjoys photographing daily life “without disturbing it, without integrating or imposing.” Some images were composed over a period of hours – an interesting location found and returned to in better light, action waited for patiently – whilst others were the results of a passing fraction of a second, her eye caught by something in a moment.

The environment was challenging. The air was thick and smelled of gas – Norilsk is listed as the seventh most polluted city in the world – and the Polar Night, two months spent with no light at all, led to insomnia for the photographer as well as panic that the sun would never return. However, she found the people of Norilsk to be warm and friendly, with “genius” senses of humour that were able to lighten the difficulties of being in the town itself. Evenings there were spent in conversation, laughter, and the strumming of guitars. Her relationships with her subjects were close, necessarily so; Chernyshova explains: “To get an intimate image you should create confidence, and make people forget about the camera.”

The pictures themselves are highly varied, presenting the different faces of Norilsk with a dramatic kind of candour: broad swathes of polar landscape are followed by heady nightclub scenes, and warmly lit living room shots seem to warm up the viewer from the unforgiving snow of other images. The mix between intimacy – of the photographer with her subjects, and their own family dynamics – and brutal nature is intense and transporting. Symbols of the mines and metallurgic complexes occur repeatedly, a permanent reminder of the literal foundations on which the town is built. Chernyshova provides a profoundly equivocal picture of life in the town, finding beauty in its cruelty.

The photographer’s inspiration for the project was the town itself. Her broad vision, encompassing sunbathers, mines, Arctic landscapes and teenagers hoping for a different life, paints a vivid picture of a way of being that most viewers will never experience.

Elena Chernyshova will be exhibiting at the Concertgebouw Brugge in Belgium from September 30th. 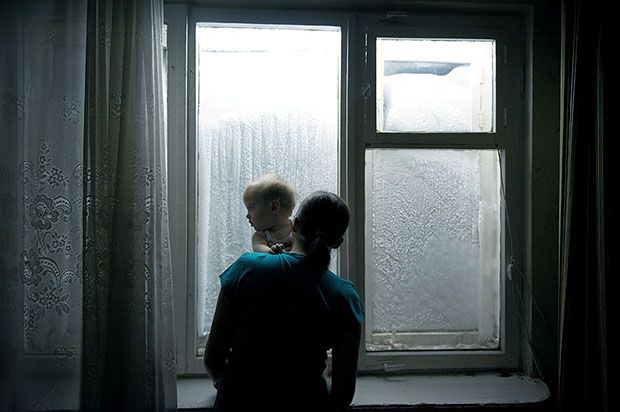 The Polar Night has an important influence on people’s lives. Generally, the inhabitants say they are accustomed to a life without sunlight. However, various studies show that the human body cannot truly adapt to these extreme conditions. The researchers have named the influence of the Polar Night on the human body “Polar Night Syndrome”. In fact, the human body releases a hormone when it is exposed to daylight: melatonin. This secretion depends on the alternation between day and night, and is involved in the regulation of many of the processes of our organism. During the polar nights and days, the production of this hormone changes. Studies show a very low level of melatonin in Far North populations. This lack of melatonin provokes a premature ageing of the body and stimulates the development of cancers. Another remarkable effect is the absence of the deep sleep state, leading to exhaustion of the nervous system, irritability, permanent fatigue and psychological discomfort, even depression. In the majority of cases, when the biological clock is disturbed, the best way to “reset the clock” is to expose oneself to light. The human body’s production of hormones thus reinstates a regular cycle and the body returns to equilibrium. The majority of apartments in Norilsk are equipped with UV lamps that mimic natural light. 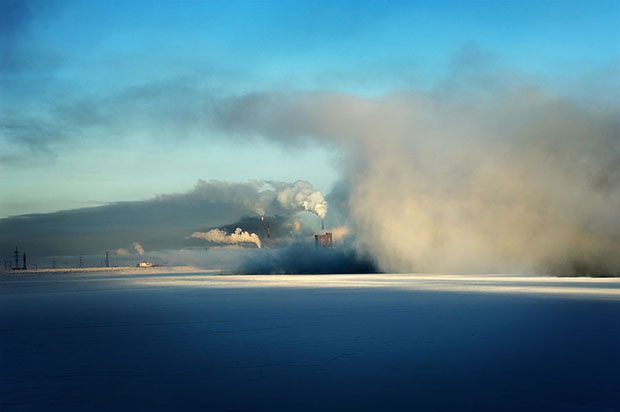 With a population of 175,300, Norilsk is one of the largest towns within the Arctic Circle. The factory town of Norilsk therefore has only one purpose: to preside over the industrial mining complex of Norilsk Nickel, the largest steel, metal and iron foundry in the world. This complex alone represents 2% of Russian GDP. 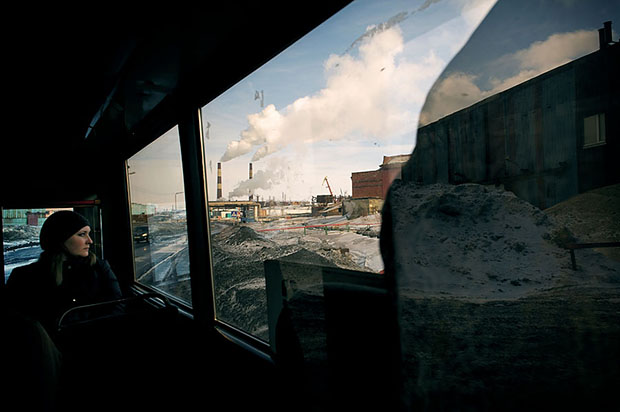 The “Grand Norilsk” is a group of three towns, Norilsk, Talnakh and Kayerkan, that are all situated within a radius of 30km and are linked by land routes. According to the census data collection in Russia in 2010, the population of the Norilsk group was 175,300 inhabitants with 105,800 of those inhabitants from the town of Norilsk itself. The other towns from the group are Kayerkan (22,334 inhabitants), Talnakh (47,175 inhabitants), and Snezhnogorsk (888 inhabitants). 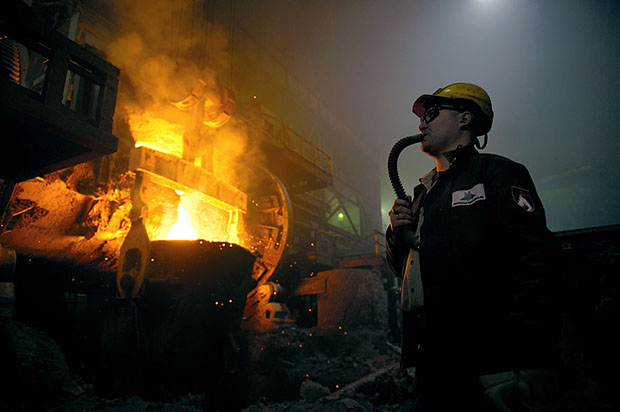 The area around the foundry is thick with gas emissions. The workers breath with the aid of pipes connected to oxygen balloons. The working conditions are hard. The pollution, the heat… The reward of these risks is three months of official holiday per year, and retirement at 45. 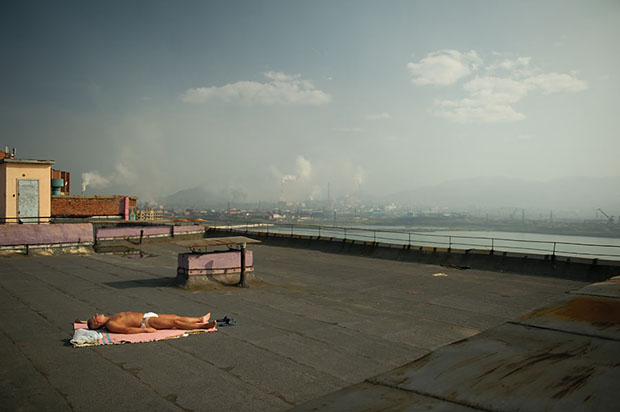 The Polar Days period is blessed with good weather and comfortable temperatures. The inhabitants of Norilsk make the most of the opportunity to be outside, staying out until the middle of the night. One of the features of Norilsk is the absence of green spaces in the town to escape to. Finding yourself in nature proper requires a 30km journey by bus and on foot. Lack of time leads people to take advantage of the sun and warmth in town instead. Above: sunbathing on the roof of a building. 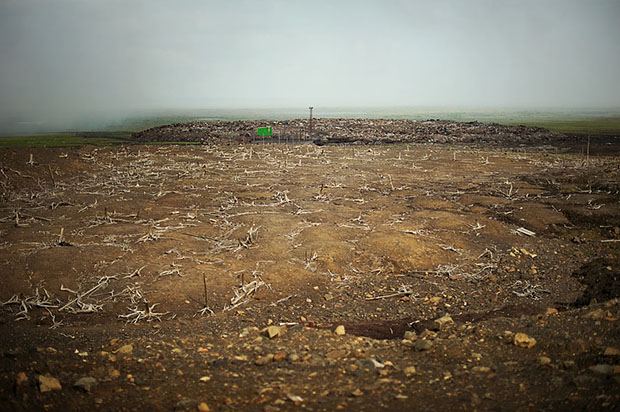 The suburbs of the town have become an open air industrial dump. The garbage – comprised of specialised components; waste; unused materials; the bodies of cars, trucks, and buses; used tyres; metal wires; and old computers and their component parts – covers whole swathes of tundra. 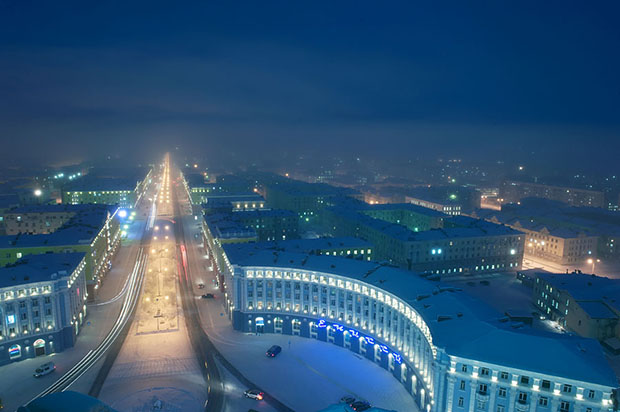 Norilsk’s construction plan was established in the 1940s by architects serving a punishment (exile or imprisonment) in the “Norillag”. The principal idea was to conceive an ideal town with a simple and logical plan. The oldest buildings are built in the style of Stalinist architecture. The second stage of building, in the 1960s, followed this system of construction thanks to prebuilt panels that were introduced during this period and were widely used. 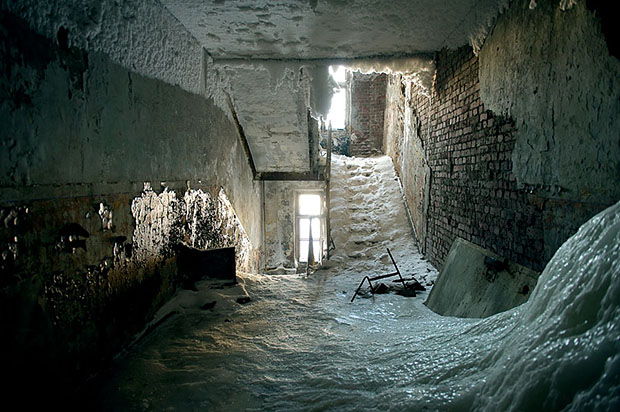 Norilsk is faced, despite its prosperity, by severe problems maintaining its housing stock. The majority of homes in Norilsk were constructed on piles. The thawing of permafrost destabilises the foundations of the buildings, the supporting walls crack and the buildings are gradually abandoned, uninhabitable. Today, the biggest problem in the town is the thaw of the top layers of permafrost, the ground underneath frozen permanently, because of the effect of numerous factors, such as rising temperatures in the Norilsk region. Over many years, principally following the collapse of the USSR, the subterranean pipes were no longer maintained and many hot water leaks appeared. 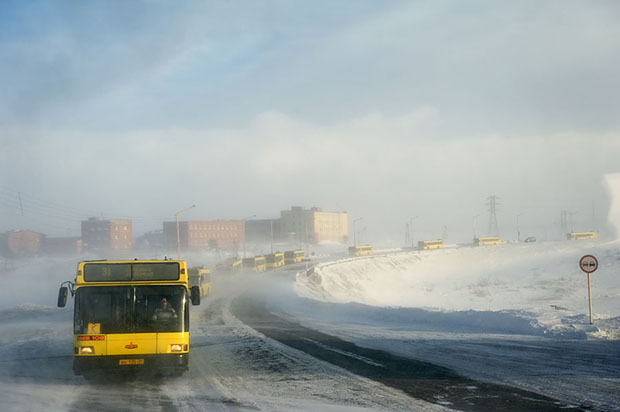 Given its position, Norilsk is subject to a severe, sub-Arctic climate. It’s one of the coldest towns in the world, far colder than Mourmansk, also situated in Russia on the same latitude. During the winter period, every trip is dangerous and requires planning. Places of work can be found in a radius 20-30km across the tundra. During snowstorms, public transport forms processions of 15-30 buses to take workers from their places of work to the town. If a bus breaks down passagers can be evacuated to another bus. These bus convoys leave just three times a day. 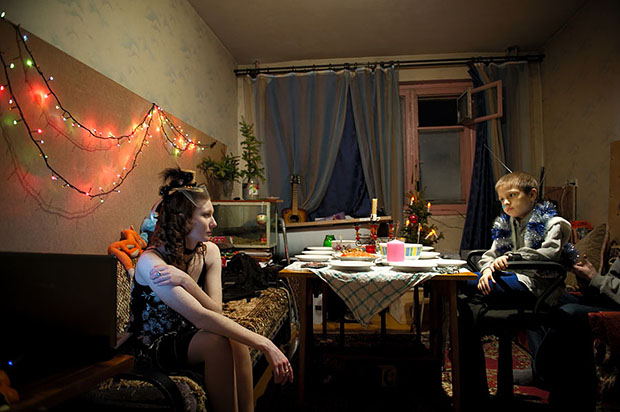 The climatic conditions, associated with a lack of public spaces to meet, are a social phenomenon at their root. To combat isolation people often invite each other to spend evenings in good company in their kitchens. The tradition is to drink a lot of tea – and occasionally something stronger – over passionate discussions, often concerning politics. Little music concerts and poetry readings are also commonplace. 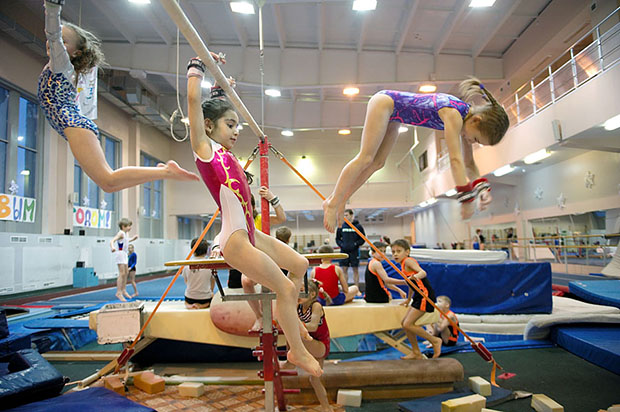 Mentally, the winter conditions are very difficult to manage. It is not easy to break the cycle of “home to work; work to home”. In fact, because of the climatic conditions, it is very difficult to go out and get fresh air, and the majority of pastimes take place in closed spaces. Even truer here than in warmer climes, sport is the best way of remaining in good health. In Norilsk, sports are common and widely practised. Many Russian champions of gymnastics, ice-skating, cross country skiing, and swimming come from Norilsk. The town boasts many sporting possibilities: a pool, a gymnasium, a football pitch, a skating rink… 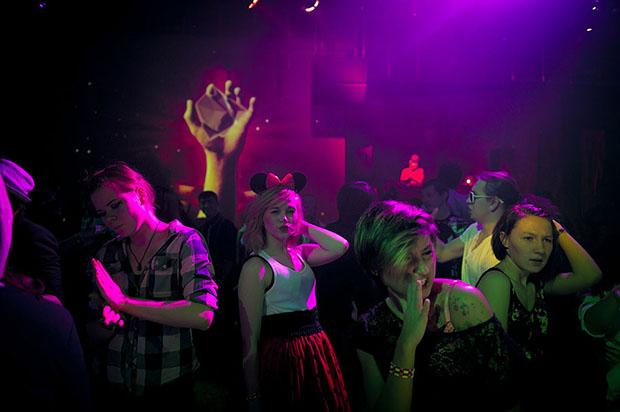 Once a month, a “true disco” – “Mechanika” – is organised in the town by a group of volunteers. It’s the only opportunity to listen to current and forward-thinking music. 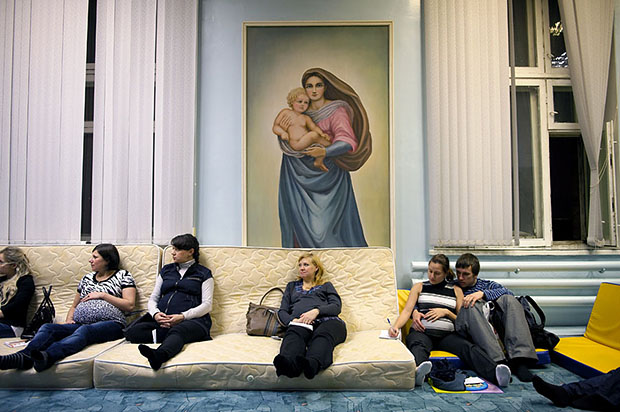 Despite the difficult living conditions and critical ecological circumstances, Norilsk’s birth rate is higher than in other regions of Russia. 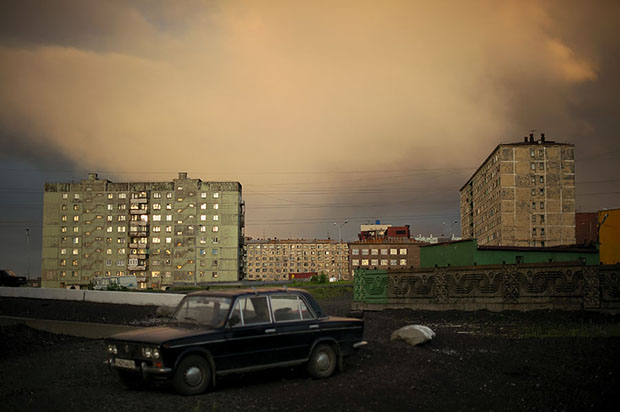 At around three in the morning, the town is sleeping, lit by the sun. It seems like a phantom town, emptied of people, though the day is ever-present. 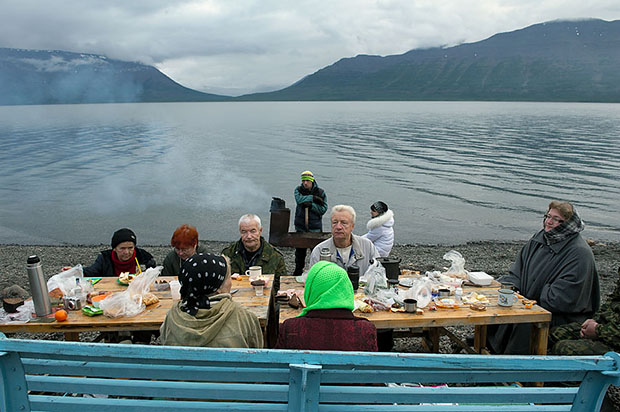