‘A Thousand Polluted Gardens’ in the Heart of Bangladesh’s Capital 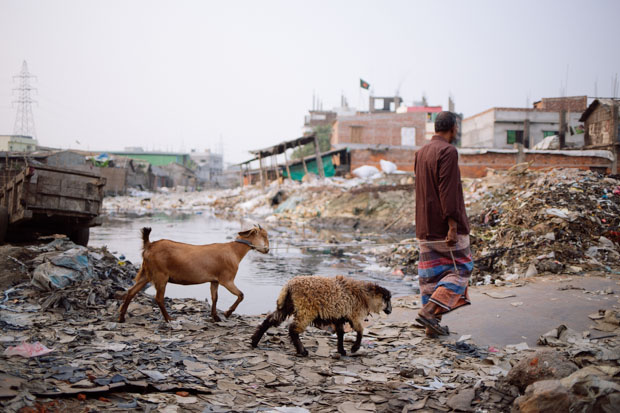 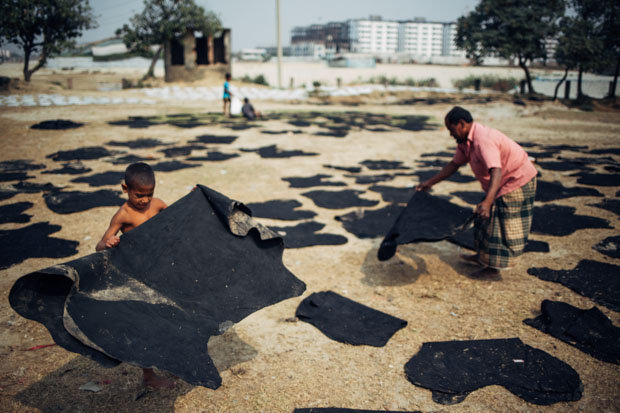 In the heart of Bangladesh’s capital, Dhaka, lies the infamous city of Hazaribagh, a densely populated and deeply polluted land. Lying on the eastern banks of the Buriganga river, Hazaribagh floods its waterways with approximately 22,000 cubic meters of hazardous waste, including the carcinogen – hexavalent chromium, every day. Spread across these 25 acres is Bangladesh’s one billion dollar leather industry, dotted with over 200 leather tanneries, each respectively contributing pollutants to its increasingly lethal layers of air, soil and water.

The profitable nature of this industry keeps export trade healthy. However, the families who physically propel the business are not privy to this fundamental human right. Daily exposure to toxic chemicals gives rise to a plethora of health issues, some more severe than others. Tannery workers involved in production are most affected; about 8000 – 12,000 people work with little to no protective equipment and come in extremely close contact with acid and other chemicals, resulting in acid burns, dizziness, rashes and nausea. The conditions are appalling.

Ranked by international research organizations as one of the most polluted places on Earth, Bangladesh’s leather industry has been in news worldwide for its aberrational treatment of workers and conditions. Hazaribagh meaning a’ thousand gardens’, now turned upside down by its leather industry, was not always a thousand polluted gardens.

The earliest record of a leather tannery found in Bangladesh territory was in the 1940s, set up along the river port of Narayanganj – now known for manufacturing jute. The small-scale production was soon shifted to Hazaribagh; the pre-partition period saw a gradual rise of tanneries in the area. Their job was to process raw hides and skins available in East Bengal, which was then exported to Calcutta, West Bengal to be processed. The 1947 partition of Bengal led to a significant growth in the tanning industry owing to a great influx of people from India and parts of West Bengal. This continued through the 1960s, until the war of liberation in 1971 and tanneries were left abandoned by their non-Bengali owners. After the war, the resident Bengali tanneries, producing for the local market, sustained what was left of this industry. In 1982, the government permitted private entrepreneurs with little or no experience in the industry to begin their own production. While this led to the formation of Bangladesh’s reputed role in the world leather industry, it has also created a potential dead zone, where labour and life wait for none.

Almost ten years ago, the United Nations Industrial Development Organisation (UNIDO), with the support of the Swedish International Development Agency began work to assist on the relocation of tanneries from Hazaribagh to the new Tannery Estate Dhaka (TED) in Savar, 15 miles northwest of Dhaka. Many report the environmental and economic benefits of this shift, however, since 2005, this has not yet been realized, owing to a series of missed deadlines and disputes. Families working in Hazaribagh depend on the tanneries to make a living; with the new location demanding more than an hour’s travel for the workers, there are no known provisions to be made to facilitate their travel between home and work. For people working in the factories, they have already seen their fair share of broken promises and failure of the government to positively impact their condition.

It is between these attempts to shift the leather industry from Hazaribagh to Savar, that the Belgium-based photojournalist Adib Chowdhury, decided to visit Bangladesh, early this year in January. For his project titled Hazaribagh: ‘A Thousand (polluted) Gardens’, Chowdhury spent two weeks living in and around the area. “There was a sense of frustration at the uncertainty of their fate should the tanneries move. Greater coverage of the area has forced many companies to stop purchasing leather from the tanneries and for pressure to move to a new site in Savar equipped with water treatment facilities. However, many of the locals have become dependent on the tanneries presence for so long they cannot simply move with the tanneries as it is further away with jobs going to the locals of the new area, leaving many unsure of what lies ahead.”

In the foreground, men, women and children are going about their daily activities, but the background is formed largely by landscapes of toxic waste. While we cannot see the hazardous gases emitted in the photographs, we cannot forget or forgive their existence, the work seems to say. Chowdhury is able to capture this community in a purgatorial state of being, there are moments of work, play and rest – the daily cycles of life it would seem. Chowdhury particularly wanted to focus “on the livelihoods of those currently working and living in the area, and felt that little attention was being given to how such a move would affect their lives having depended on the formal and informal economy provided by the tanneries presence for so long.” 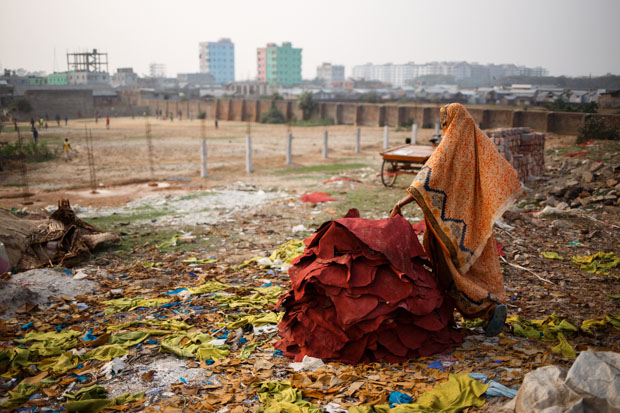 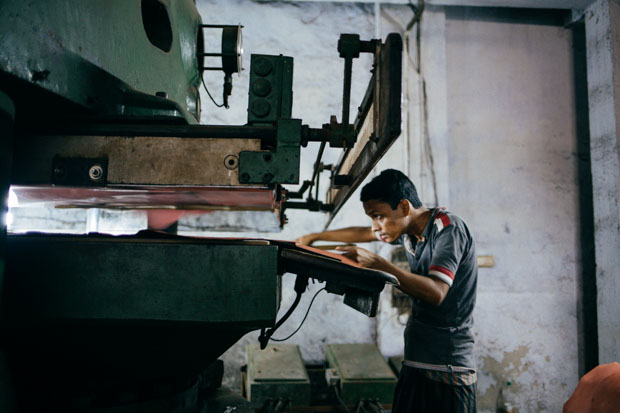 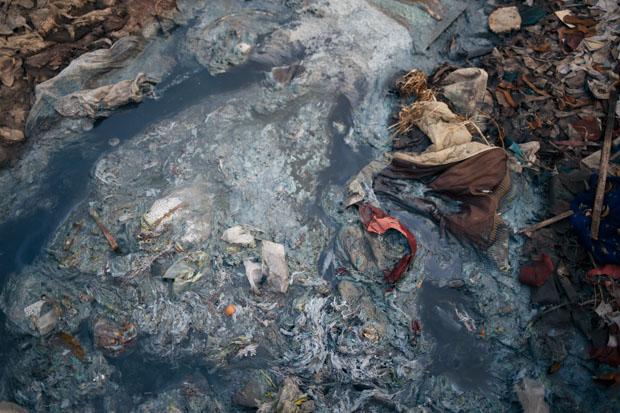 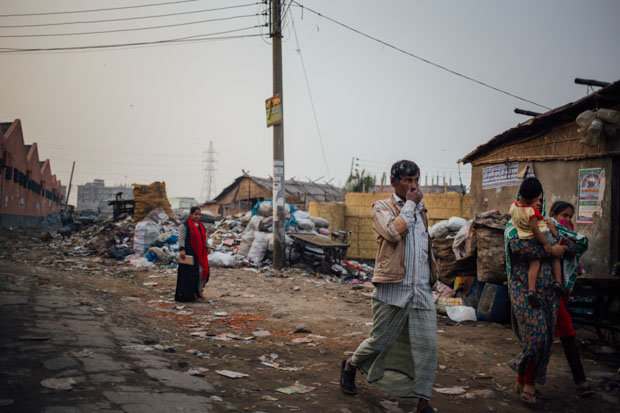 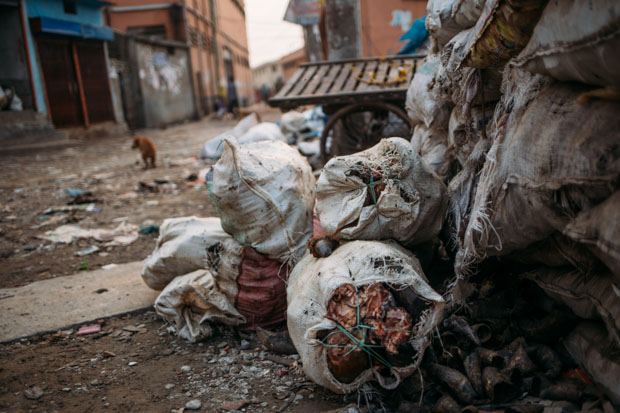 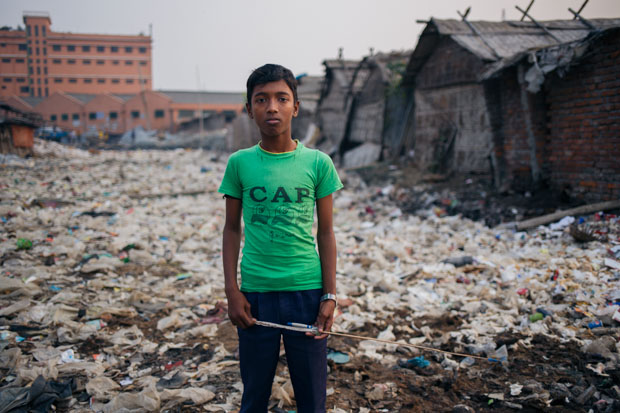 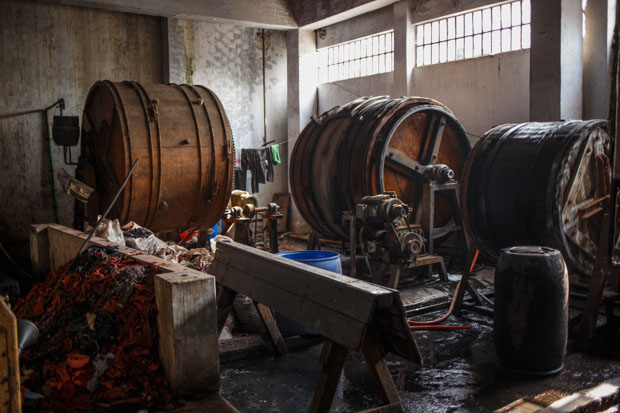 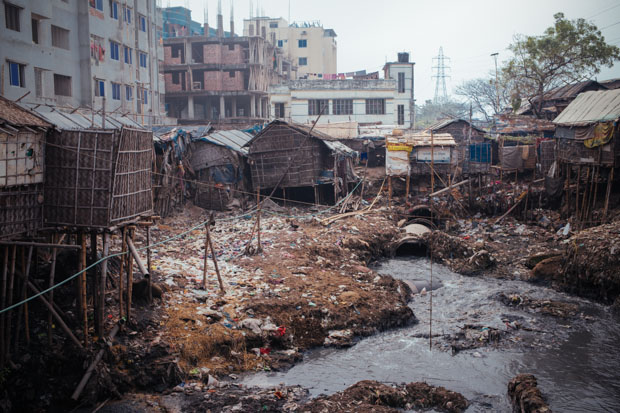