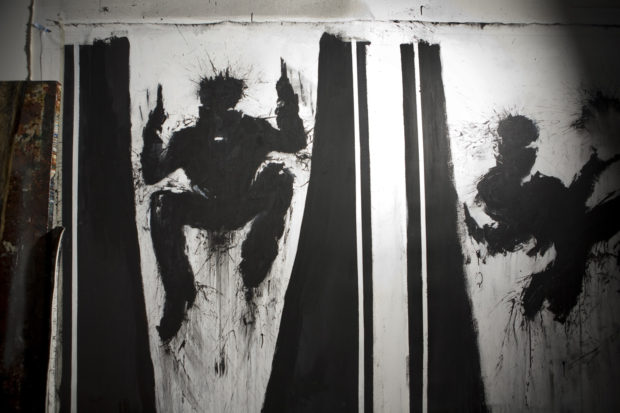 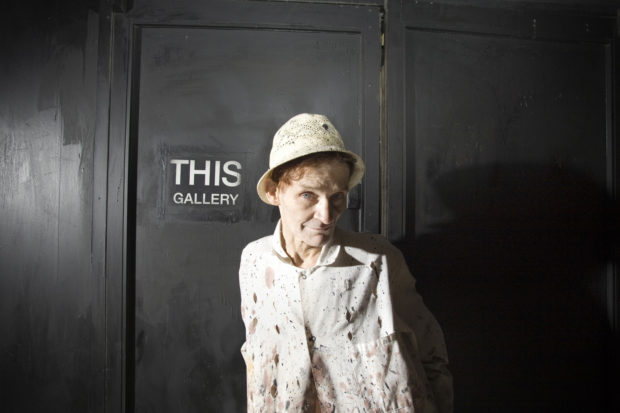 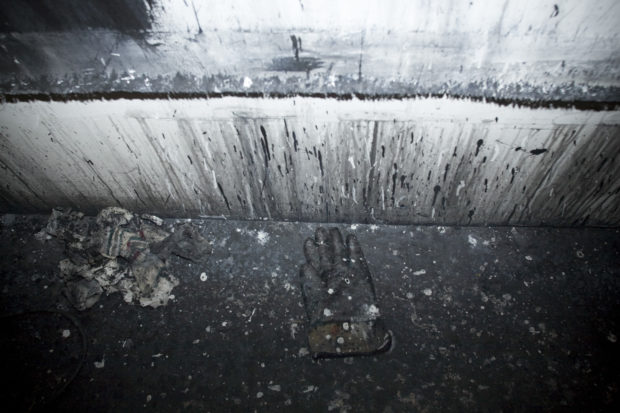 Canadian artist Richard Hambleton (1952-2017) emerged from the Lower East Side art scene in New York as an urban legend at a time when the city was filled with characters that inspired some of Hollywood’s most iconoclastic films.

The young artist first left his mark on the streets of 15 cities across Canada and the United States between 1976 and 1979, creating Image Mass Murder Art — a series of police-style “chalk” outlines painted around volunteer “homicide victims.” In some cases he splashed red paint to add a hyperrealistic touch to the “crime scene.”

By 1979, Hambleton was firmly established in New York at a time when the Lower East Side was coming into vogue during the era of graffiti and street art. Alongside contemporaries such as Keith Haring and Jean-Michel Basquiat, Hambleton became notorious for his “Shadowman” paintings that loomed ominously on the streets, in the alleys, and at corners waiting to strike pedestrians at a time when street crime was a regular feature of daily life.

Hambleton’s “Shadowman” army reached deep with hundreds of faceless, life-sized silhouettes painted in black on buildings around New York. He chose locations for maximum impact such as a dark alley or a street corner to create the feeling you were being followed or watched, heightening the pre-existing paranoia that many had about being robbed or assaulted on the streets.

Hambleton became notorious, drawing attention from the likes of Malcolm McLaren and Vivienne Westwood, who collaborated with him in 1993 on a “Shadowman” jersey skirt. He briefly became the darling of the art world, exhibiting at the Venice Biennale in 1984 and 1988, before going underground until 2009, when he re-emerged as a result of the efforts of Carine Roitfeld’s son, Vladimir, who partnered with Andy Valmorida and Giorgio Armani to produce Richard Hambleton – New York, a 40-year career retrospective exhibition.

Once again, Hambleton was feted by the art world and soon became the subject of Shadowman, a documentary film that debuted at the Tribeca Film Festival just before his death in 2017. For all of his success, Hambleton lived a hard life, with a heroin addiction that drove him to desperate living conditions – as well as inspired a period of making art with his own blood. It’s a classic Old New York story, and all things told, quite impressive that he made it to 65.

In 2009, American photographer Rose Callahan received an assignment from The Wall Street Journal to visit Hambleton in his studio for a feature story to time with his retrospective — but the story never ran. Instead, Hambleton was relegated to the shadows once more, an artist largely unknown outside a rarified world.

In Callahan’s never-before-seen photographs, we see a portrait of the artist as an old man who is still wildly young at heart. Hambleton has an eerie yet alluring twinkle in his crystal blue eyes, his pale skin, red hair, and petite frame suggesting something of a leprechaun crossed with a mad scientist. Dressed in all white, Hambleton’s paint splattered artist’s smock and matching hat are strangely debonair, and make a fitting counterpoint to his intense studio, which is filled with artwork, supplies, and an unexpected massive teddy bear.

Callahan’s portraits of Hambleton, his artwork, and studio offer a poignant, revealing glimpse of an underground artist at the height of his late career. You can feel a frenetic energy burning in the man, a lightness desperately trying to overcome the undertow that lurks in the shadows of his work and his life. Callahan beautifully captures the tension of Hambleton and his work, the strange sensation of a need to explore inner darkness keeps his fire alive. 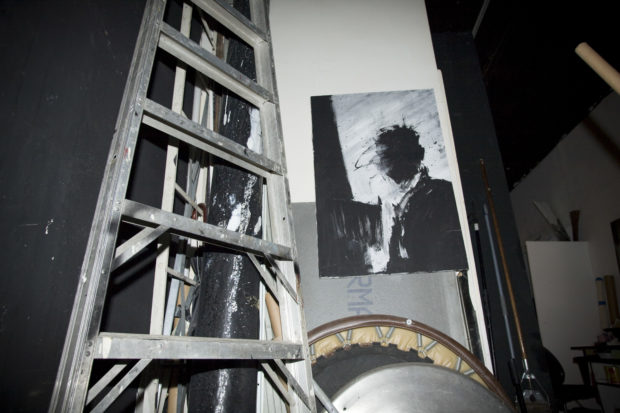 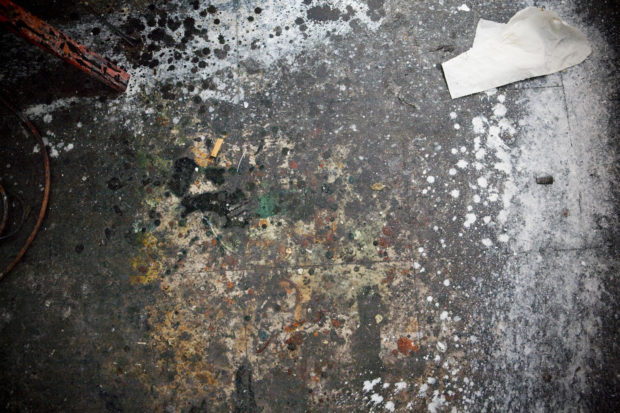 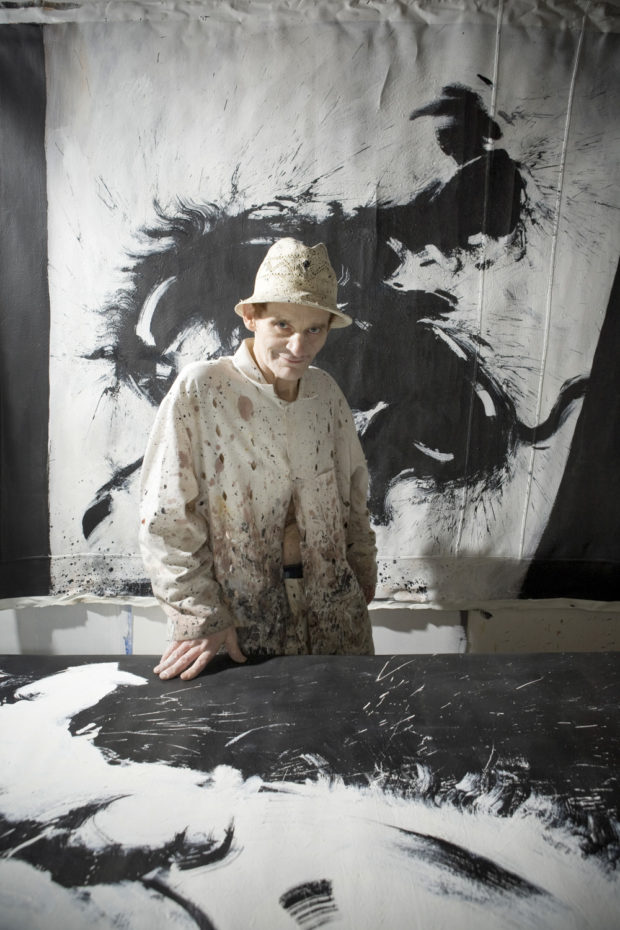 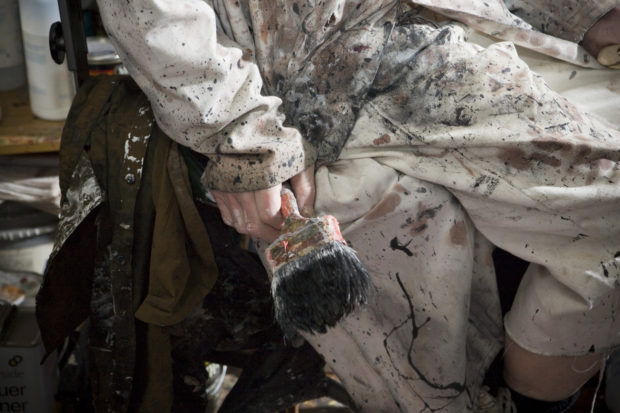 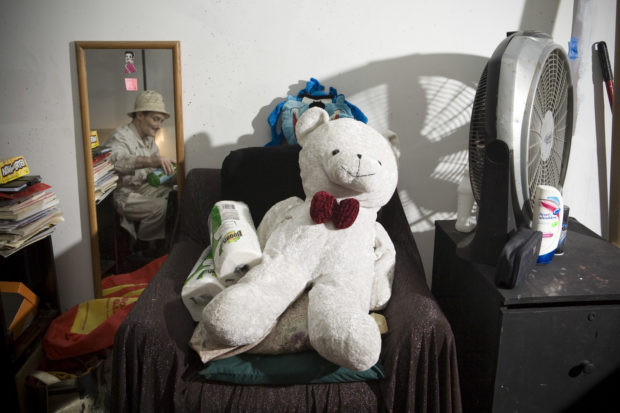