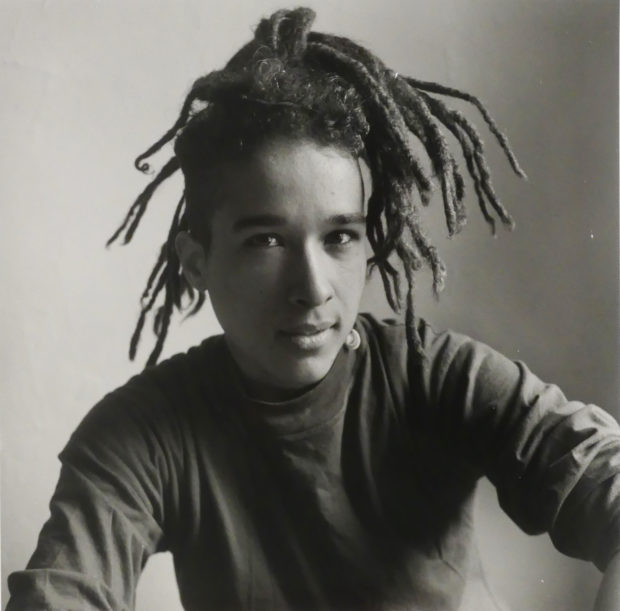 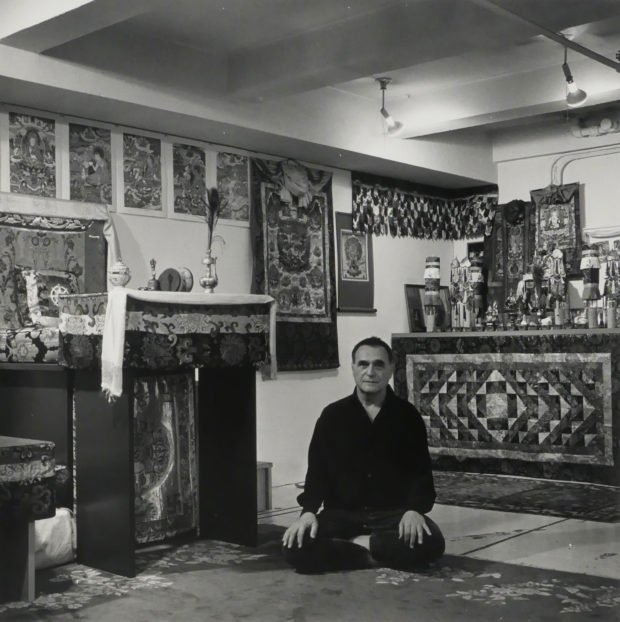 On July 16, 2002, American photographer Robert Giard died doing what he loved best — traveling across the country to make portraits of LGBTQ+ writers. In total, Giard photographed some 600 writers from all walks of life, creating a visual record during the height of the AIDS crisis.

Giard’s inclusive spirit lead him to create a veritable catalogue that encompasses not only a broad swath of enthographic communities, but a diverse array of literary practitioners, be it novelists, playwrights, and poets or journalists, historians, and activists including Stonewall rebels Sylvia Rivera and Storme De Laverie.

The photographs were first published in the landmark book Particular Voices: Portraits of Gay and Lesbian Writers (MIT Press, 1997), and in 2004, the renowned Beinecke Rare Book & Manuscript Library at Yale University acquired Robert Giard’s complete archive as part of the Yale Collection of American Literature.

Now a selection of 53 portraits are on view in Particular Voices: Photographs of LGBTQ Writers, Artists and Activists, 1980’s – 90’s at Daniel Cooney Fine Art, New York, now through July 26, 2019. Here, we get first-person accounts of Giard through the eyes of those who sat for him as well as Jonathan Sillin, Giard’s life partner, co-president of the Robert Giard Foundation, and executor of the Robert Giard Estate. 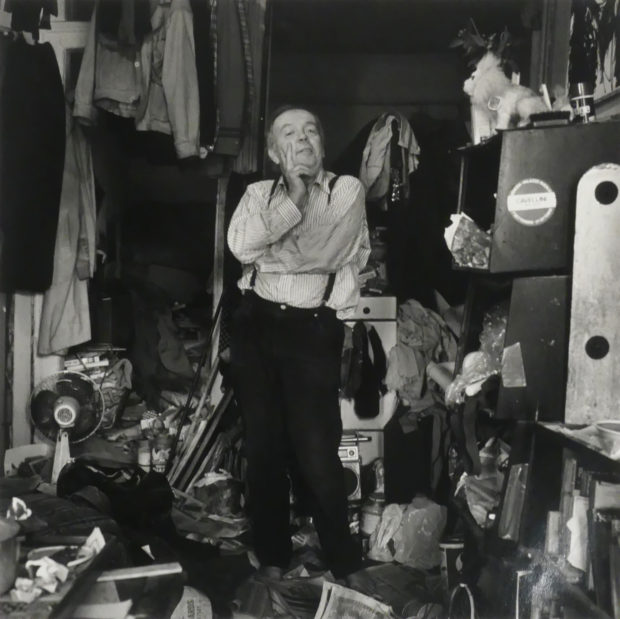 “The project began modestly and it grew and grew and grew. It started with going to see The Normal Heart and seeing the names of all of these people who had died painted on the walls of the theater. Bob began photographing people we knew, initially lots of gay white men, and slowly moved out from there. He had a strong commitment to being inclusive. He was not an exclusive kind of fellow at all.

“At that time there was a degree of tension between lesbians and gay men. We knew many lesbians who started to make introductions for Bob into women’s communities. From the he moved into African-American, Latinx, and Native American communities. Moving into each community took a long time. It was a matter of building trust. Communities that are marginalized are often hesitant to open themselves up to outsiders.

“In terms of inclusvity, it was not only novelists and poets, people we think of automatically when we think ‘writer,’ but it was journalists, historians, it was broadly conceived. Particular Voices begins with photographs of historians, people who have archived and documented gay and lesbian life and written about it extensively. Bob had an understanding his work would eventually contribute to that.

“Bob kept a diary of every contact he had with every writer. There are extensive diaries in which he talks about the initial phone call, the photo shoot, the on going contact with the writer.. In 2004, the Beinecke Library at Yale acquired the estate, Bob’s entire archive, which includes al of his correspondence with well-known people like Audre Lorde, Edmund White, Allen Ginsberg, and also less well-known people.

“Bob made these trips around the country, so he picked out a region like the Deep South or the Northwest. He would travel to these areas where he knew some writers and what would happen would be one writer would refer him to another writer rather like the medieval troubadour going from one village to another.

“When I traveled with him occasionally what I saw was he would enter a writer’s house and he had the ability to both immediately connect with the writer face t face but also scanning the environment at the same time to see where a photograph would work well, what was reflective of the writer in some way. Bob was looking at the environment and thinking about what was there and what reflects the writer’s life.

“As time went on, he was sensitive to the writers who were much older and wanting to capture them before they passed away. With the impact of AIDS wanting to be sure to get people who he knew were sick and were not going to live very long. That was a strong motivator. Part of the passion he brought was that sense of mortality. You couldn’t help in those years to feeling extraordinarily vulnerable and that was the way it was. This was a hedge against that vulnerability.” 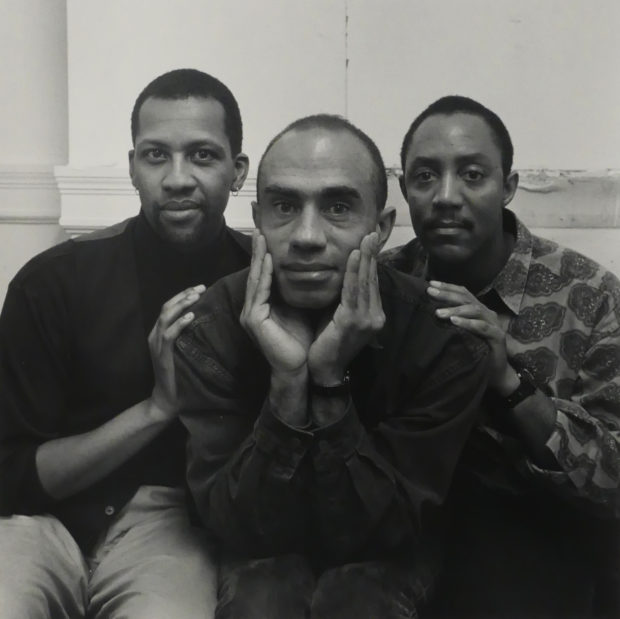 “Robert called some time in 1994, when I was performing and touring and was a writer and co-creator of a Black queer performance troop called the Pomo Afro Homos. The company existed from 1990-1995, and was based in San Francisco. We toured across the US, London, and Canada. It was a bit of a rocket ride I didn’t expect to take, but it took off so me and my colleagues rode it all over the place.

“Robert said he was doing this series of photos on writers and was going to be in the San Francisco area shooting local Bay Area based lesbian and gay writers. He said he wanted to capture and shoot an image of the Pomo Afro Homos as writers. I really appreciated that.

“I may have met Robert for coffee briefly before, to say hello and get an idea of what he was looking for. At that particular moment there had been some dramas — there’s always the drama you are performing on stage and the drama of what you are making. Some of that was going on at the time so it was a bit challenging to find a place and time the three of us were available to be shot.

“I was going back and forth with Robert on the phone, explaining the difficulties of getting the three of us in one spot and we managed to find a brief window, maybe an hour. He came down to a dance studio in San Francisco located in the Civic Center. In the background of the photo you can see the wood trim is quite worn and the paint is flaking. It was an old building that has since been demolished. It was a location we had booked for a brief period of time that everyone could get to. There is definitely a rough-hewn quality to the photo. Rehearsal rooms are our work place so it reflects that.

“There was a definite discord in the company at the time. Most photography for theater is for marketing, with people performing or smiling. We weren’t feeling that at the moment, and the photograph was clearly not for promotional purposes but for historicizing the company. In the session we talked about that with Robert and tried to come up with a few different poses or takes that reflected what our work as writers, writing for performance.

“The way the hands are posed, and the figures are arranged, to give an image of an ensemble that is considering the moment instead of enacting or performing the moment. What I like about the photograph is this mix of the body postures. There is an angularity that you could describe as a soft vogue, the dance, that was popular in the late ‘80s/early ‘90s that came out of the Black ballroom competition. We’re not literally vogueing but there is an echo of that in the gestures. How one writes with one’s hands, there’s a focus on the hands. The faces are not — people are trying to be themselves, who they were at that moment.” 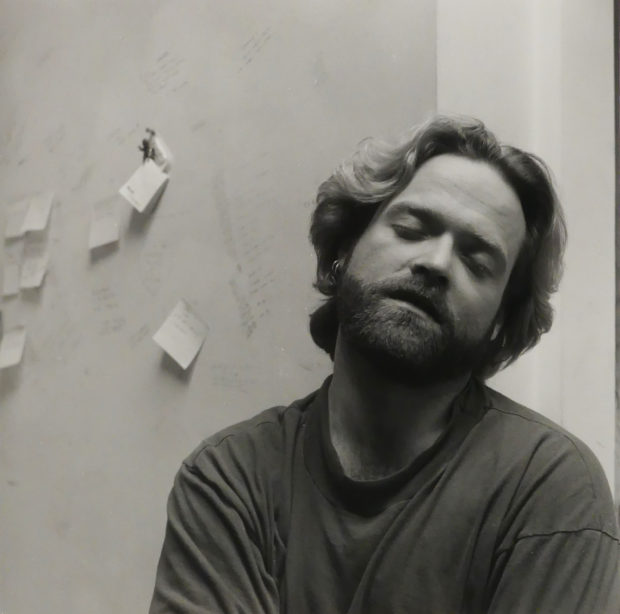 “I have a twin brother who died in 2002, and Robert Giard was my brother’s teacher at New Lincoln School in New York City. Years later I was a singer songwriter performing, out as a gay guy, performing at some club and there was a little write up in a magazine called Christopher Street. I got a postcard from Robert Giard saying he had seen the article.

“He told me he was doing the book and I said I would be honored. I was just beginning my career as a writer. I was very surprised when I found out he was a photographer. For as long as I knew him he was a teacher. He was very laid back and very thoughtful about what he was going to say. He was very considerate.

“The photograph was taken in 1988. I was living in a loft in Brooklyn that had once been a picture frame factory. I was living with an architect and working at night. The wall behind me has post its with phone numbers and sometimes we’d write on the wall. The wall was very raw and there was a lot of space.

“Bob said, ‘I would love if you would sit in from of the post-its but from a distance they look like flags or birds.’ I think it was my idea to close my eyes because I always did this as a singer songwriter. I said, ‘Why didn’t I pretend that I am daydreaming?’ That photograph really is who I was at that time in my life. I was a dreamer with my eyes closed metaphorically in many ways. I was a hippie for a long time.

“He photographed every gay writer in the country. He caught a lot of people the beginning of their careers and captured them in very revealing ways. I thought it was a remarkable project. I remember thinking Bob was doing things in the community that hadn’t been done before.” 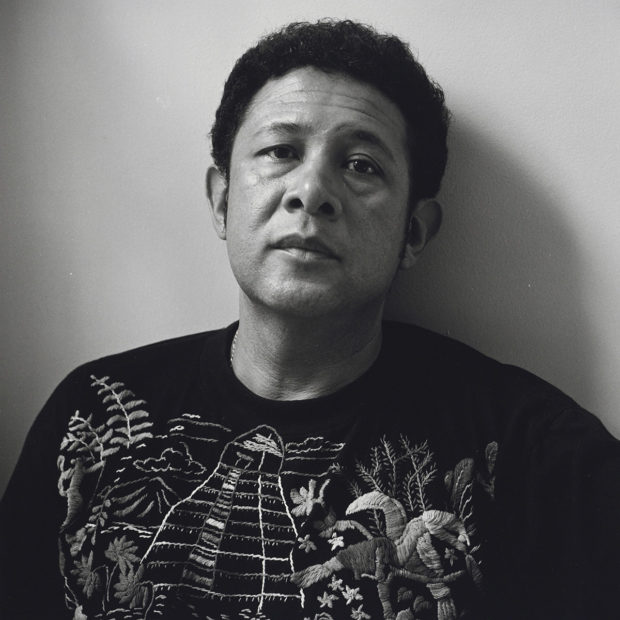 “I imagine Bob contacted me and said he was doing this project, and that’s the first time I heard from him. I didn’t know him before. I told him, ‘Bob, as you photograph me you tell me your story.’ He said, ‘Okay, we’ll do that.’ He started telling me the story of his life and taking the photograph. I made it into a poem and published it later, just his words.

“That summer I was in Sag Harbor, staying at the house of a friend who was away in India. Bob came through the house on his bike. He said, ‘Now we are going inside.’ He made me change my t-shirt three times. It was going okay, but he said, ‘I’m not getting what I want.’

“He said that some of the best pictures he had taken were of people who were thinking about lunch. And at that moment, I leaned against the wall, closed my eyes, opened them, and thought, ‘I wonder what she has in this refrigerator I can have for lunch,’ and that’s when he snapped that photograph. He said, ‘This is the one.’

“It was very pleasant. He was a lovely person. He was so natural. He was very humble and his approach to life, as he talks in the poem. He was very willing to talk about himself and then he left, and I don’t think I ever saw him again. I have an image of him riding away on his bike that summer afternoon.” 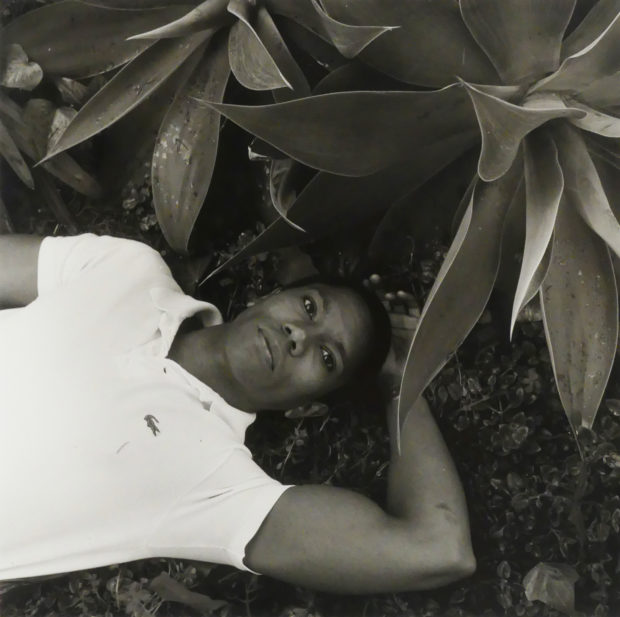 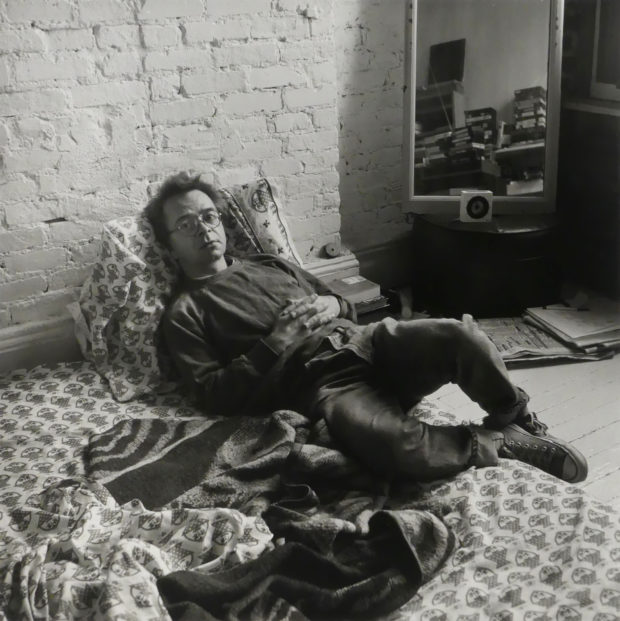 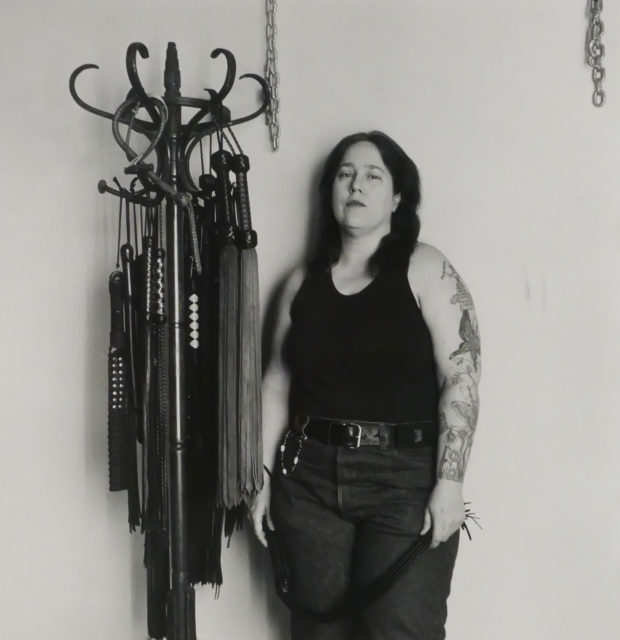 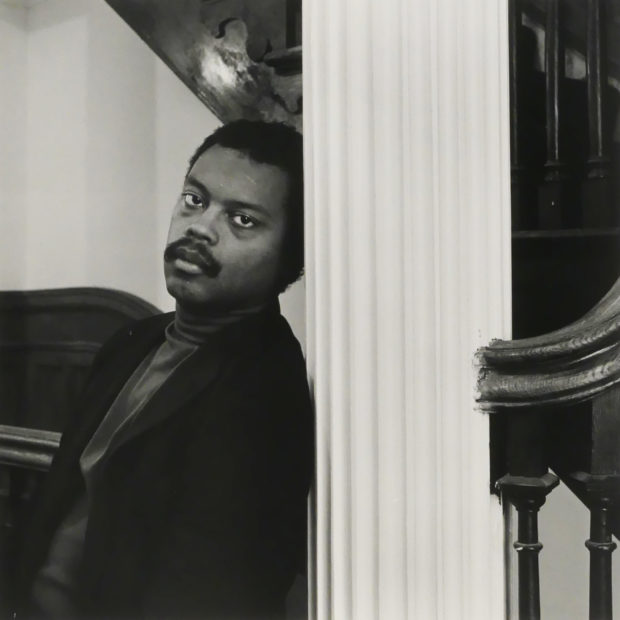