Tabitha Soren Traces the Trails We Leave on Touch Screens 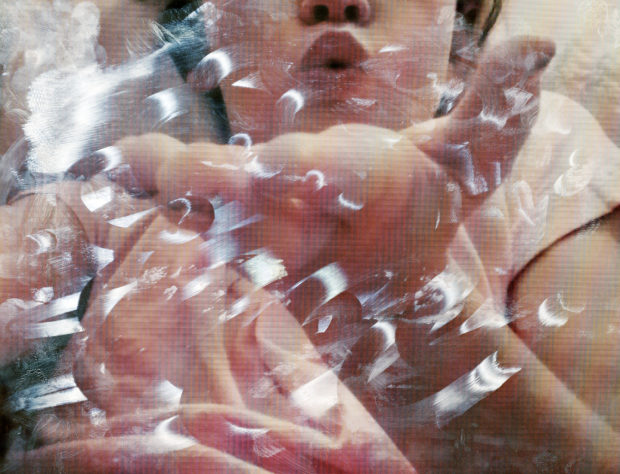 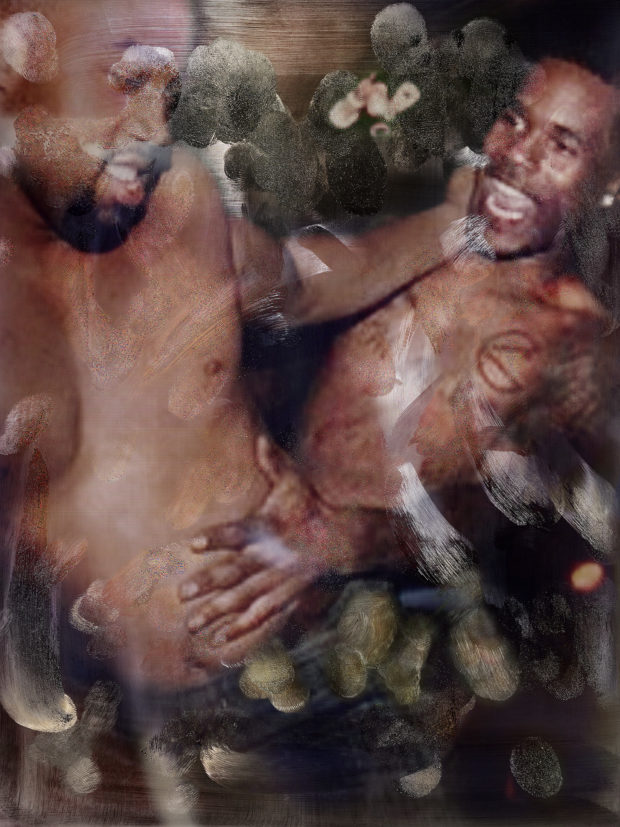 In our increasingly pixilated world, we are known by the trails left behind — the smudges made by incessant pawing at our digital devices all day and night. With the quick whip of the wrist, we wipe all traces away before starting anew, our attention glued to the images and words illuminated by a flickering light that sends us down endless rabbit tubes.

Time slips away until we surface once more, the remains of our journey reduced to mere streaks — subject in and of itself that fascinates photographer Tabitha Soren. In Surface Tension, the former television journalist positions herself on the other side of the camera and looks at the very apparatus of content consumption itself — the screens our fingers feast upon as we travel at the speed of swipe.

Now on view at the Davis Museum at Wellesley College in Massachusetts through June 9, 2019, Surface Tension is a curious, lyrical ode to one of the most visceral of all senses we hold. Here, touch is both sacred and profane, a base, coarse reminder of our physicality and a symphony of gestures made over a period of time, indicating a desire for more content, more stimulation, more entrée into an invisible, nebulous realm that we can never know beyond the appearances we voraciously consume.

In advance of her April 17 artist talk, Soren shares her insights into the nature of the image and the ways in which it adapts to the plasticity of a digital world that feeds on our desire to look. 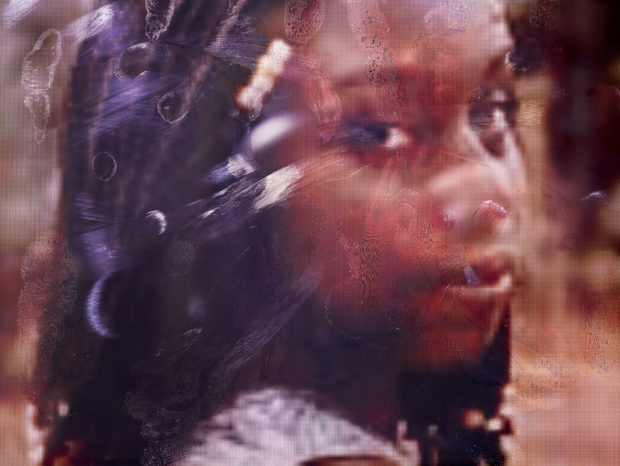 As someone who has been on both sides of the camera, could you speak about the power of the image in a society that is driven by and dependent upon technology for mass communications?
“I think the technology has changed so much since I worked in television that it’s very hard to compare the pre-internet and post-internet worlds. Some things are consistent: what troubles and what distracts us is still connected. But now, messages of dissent can emanate from an image to a much wider and disparate audience. The Internet is particularly good at giving voice to marginalized groups or to oppressed evidence.

“The television industry in which I worked had many more gatekeepers and information editors. The internet making the image world much more egalitarian makes me think of Kanye’s song Power (‘take a video shoot a viral/ take the power in your own hands’) – This version of power explains an entire generation. But one problem with the new normal is that it’s easy to confuse ubiquity for importance, the familiarity of a celebrity’s face for true authority, and virality for veracity.”

Having moved from TV journalism to fine art photography as digital came to the fore, could you speak about what fascinates you about the ways that we consume images in a digital world?
“Consume is an apt word in this case. In Surface Tension, I am sourcing images from the news, social media, and phone photos. I’m raising questions of authenticity and exploring the increasing challenge we face in distinguishing between reality and fiction. Digitizing pictures and videos and disseminating them on the internet has us all drowning in images. What did Virginia Woolf write in the Waves? ‘One cannot live outside the machine for more than an hour.’

“Machines, industry, technology of all kinds – not just screens – can easily outrun our comprehension of what it does to us even while they incarnate our wishes, fears and pathologies. This is not a phenomenon limited to our Internet world. What could be more pathological than a nuclear weapon? Or Russian bots impacting the United States election results?

“Another concern I have is that it’s hard to think differently when these devices make our culture so homogenized. Spaces where you can think and be alien are becoming rarer and more confined. Finally, one of the other more subtle topics that Surface Tension intersects with is that people in all these photographs are out of our reach–beyond touch—and yet somehow eternally, virtually present.

“Does digital culture encourage people to keep each other at such a distance from one another because we are surrounded by simulations of actual human beings? A 2018 PEW Research Study found that a fifth of Americans admit they are never off-line. I worry digital exchange stands in, compensates, and is a paltry substitute for human touch.” 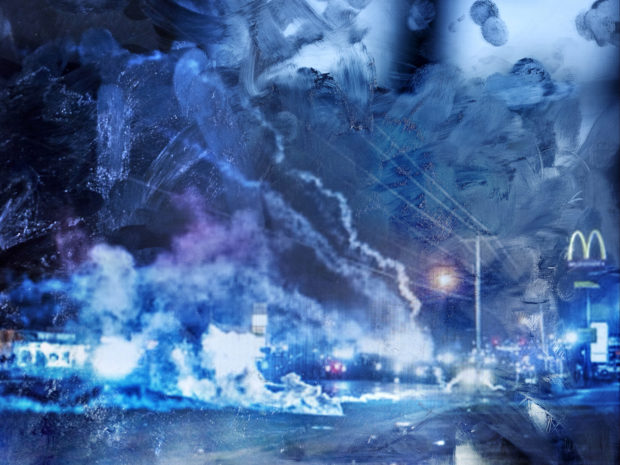 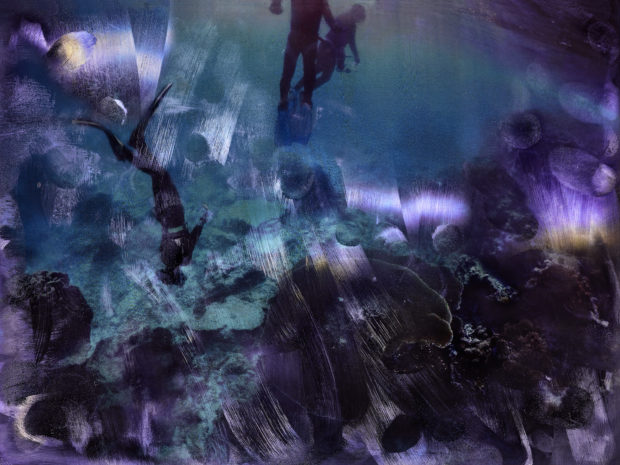 Could you speak about how the works in Surface Tension allow us to pause in our lives of endless scrolling, and look at the physicality the experience as mediated by the physical traces we leave behind on our devices?
“Browsing in the digital sphere is cursory, noodling, endless, habitual. It is a study in swiping things away, leaving things behind, ever unfinished. It is the piece you didn’t finish reading, the item you never got around to buying, the question you never got around to answering.

“The images in Surface Tension encourage us to actually see our relationships with everyday technologies in unexpected ways, highlighting the marks we leave on glass screens—marks that we routinely ignore or erase. The residue of surface touch record our lives; the subjects pictured beneath them record our culture. The prints, smears, and stains are not just grime, but rather evidence of flitting attention, a map of how we spend our time. These pictures allow us to see the map, the proof of what we’ve been doing on our screens.

“The reason I shoot these images with an enormous view camera is so that the 8” x 10” negative can capture every detail from the merging of the analogue and digital worlds. An image of a tattooed arm with the pointed finger, for example, is a simple picture from a friend’s Facebook feed. To me, though, it looked like a finger swiping a screen while simultaneously being a person reaching for something beyond the physical, beyond the darkness. It’s an arm attempting to summon a force beyond the gritty reality of everyday life. If only a bit of that is communicated to viewers of this work, I will be happy because, as you say, they will have paused.” 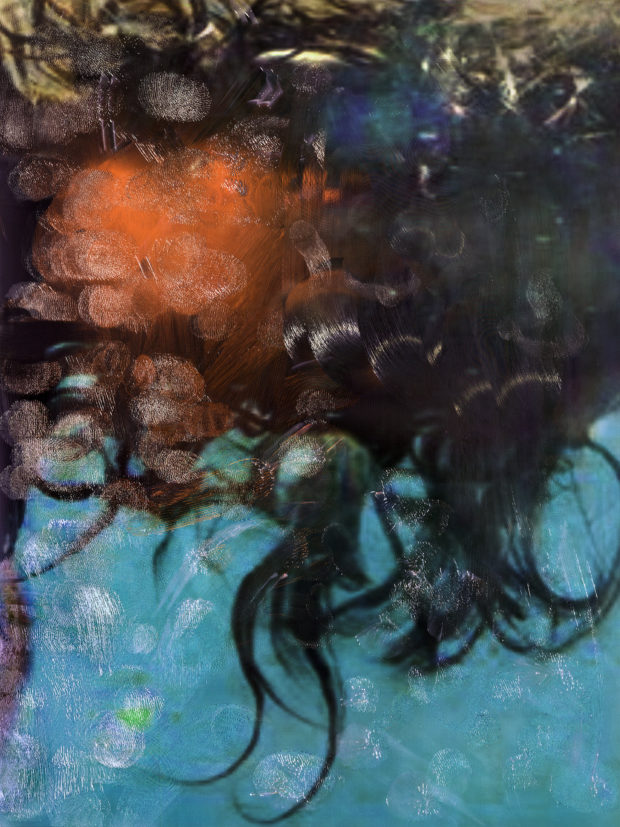 How do you determine which images to photograph for this series of work, and did you notice any formal or thematic motifs that emerged in the process?
“This is been the hardest nut to crack with this work. It took me years to figure out how to collect the pictures into a group that were more impactful together than they were separately. It took me a very long time to see that touch was not only in the haptic language of finger markings on top of each picture but many of the pictures were also related to touch underneath in the background image.

“So, for the Davis Museum exhibition, I chose those pictures related to touch because touch is essential to what it means to be human. The images range from the harmful touch of police brutality, human touch causing environmental damage, and touch as stress reduction in the struggle to adapt to technological overload.

“Overall, this body of work is about my feeling that right now our humanity is in direct conflict with the daily fight against technological domination. The science of touch convincingly suggests that we are wired to – we need to – connect with other people on a basic physical level. Yet, we spend an increasing amount of time touching technological devices. The Surface Tension photographs combine our oily, sweaty, teary, messy human lives with our machine ones. The residue is not just grime – its evidence of the otherwise invisible. Marks the body made without us thinking about the result.”

How did you conceptualize the installation of the exhibition to enhance the interplay between the images in the show?
“The project circles way, way back in art history to stone age cave paintings. Those artists or their entourages left hand prints in caves. They were palping a living rock with hopes of reaching or summoning a force beyond it. Just like we are doing with our screens. The bottom line with Surface Tension is that the viewer is forced to see an everyday technology object in a way they usually don’t. The marks on the glass screens that technology users normally try to ignore or get rid of are the focal point of this project.

“I wanted to print the pictures large enough that viewers were taken away from the fact that they are staring at something they see zillions of times a week on their phone or tablet. Therefore, some of the images are 5 feet by 8 feet – and because I’m shooting on such a large negative (8×10 inch film) none of the sharpness is lost. The landscapes feel like you could walk into them. Think Gericault. The people in the images are life size. The fingerprints would make the FBI and Homeland Security very excited!” 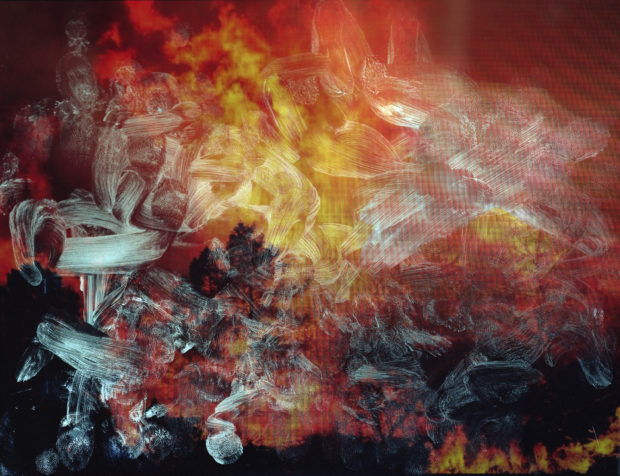 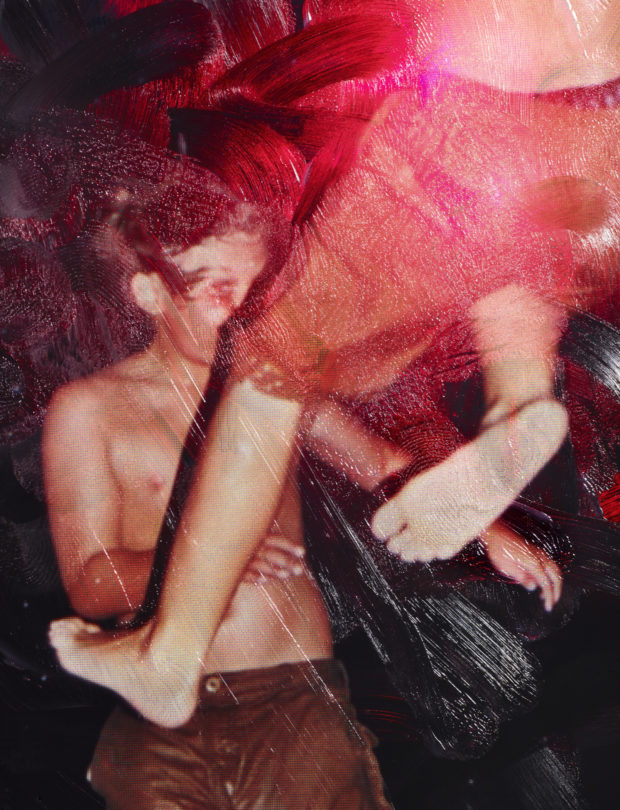 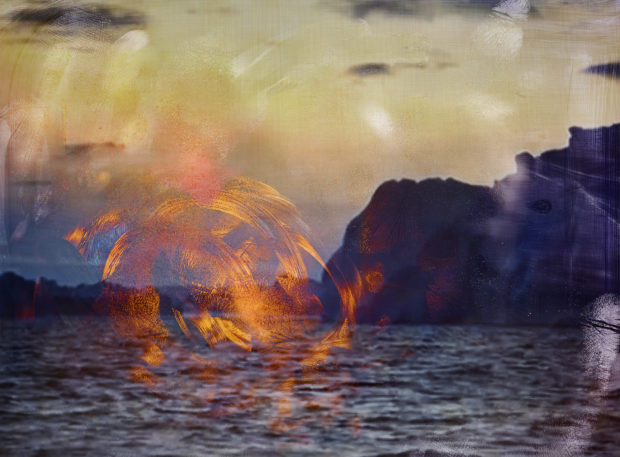