These Funny, Disarming Photos Will Make You See Sports in a New Way 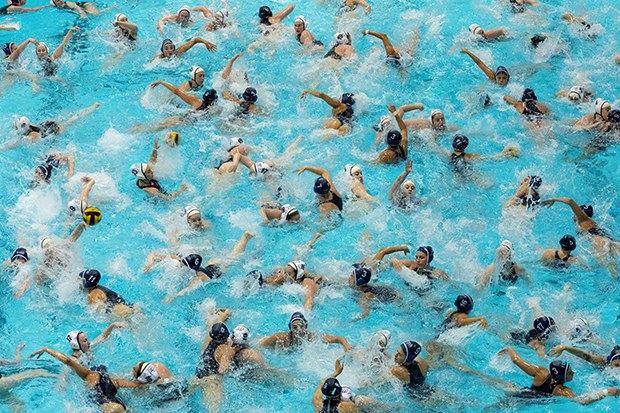 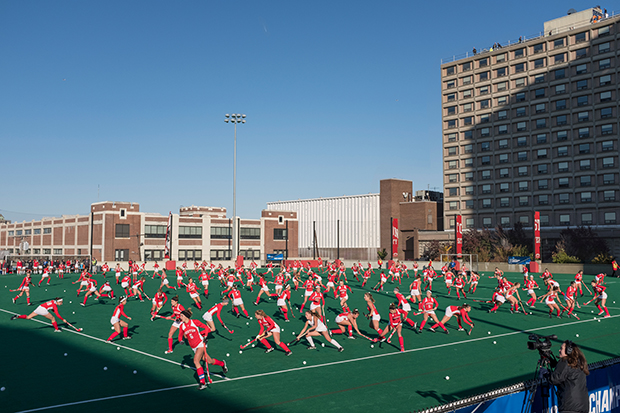 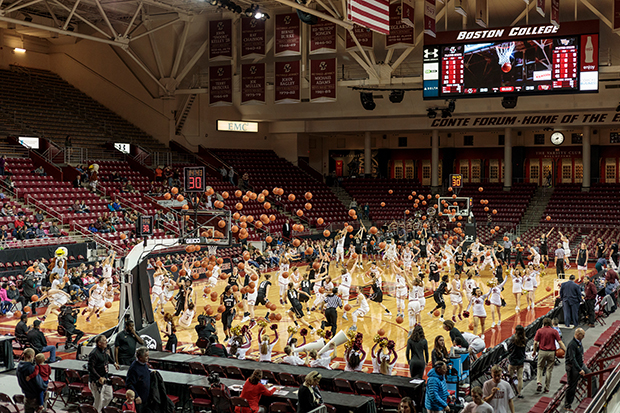 “I can say about all my pictures that what you see really happened, just not at the same time,” the Massachusetts photographer Pelle Cass tells me. He’s been working with composites over the last decade, and he calls these images his “still time-lapse photographs.” After collecting many pictures in one location over a period of time, he selects individuals from various frames to include in the final scene.

Everyone remains in the exact location where they were photographed, except through Cass’s particular brand of alchemy, the hours have been condensed into a fraction of a second. Recently, the photographer has moved from the streets and into the sports fields, arenas, pools, and stadiums of nearby colleges and universities. In Crowded Fields, he captures the strange and surreal choreography of sports in a new way.

Sports arenas offered some advantages, including the prevalence of photographers. “At sporting events, you’re practically expected to take pictures,” Cass explains. “So I completely blend in.” But there were some obstacles to overcome. “It’s always a challenge to pick a place to stand, and more so in sports,” the artist admits. “The decision can result in a couple of weeks’ worth of work in Photoshop.” For Crowded Fields, in particular, it was important to highlight not only the movements of the athletes but also the layout of the location itself. Once he’s standing, Cass doesn’t move for hours.

Of course, the athletes usually don’t cooperate with Cass’s plans, but it’s all worth it in the end. “I think that it’s more interesting to be forced to compromise the image I imagined and accept the real patterns,” he adds. Throughout the course of the project, he’s been able to learn the shapes and rhythms of the sports themselves. In some, like hockey, the athletes will cover the entire rink or field throughout the game, while in others, like lacrosse, only specific areas will experience heavy traffic.

“Photography is not like painting,” Henri Cartier-Bresson famously said. “There is a creative fraction of a second when you are taking a picture. Your eye must see a composition, and you must know with intuition when to click the camera. That is the moment the photographer is creative. Oop! The Moment! Once you miss it, it is gone forever.” Decades later, Cass offers an alternative. In his work, time can rewind and begin again, and as with a painter, he can choose who stays and who goes. As for the number of frames used to create a single image, the photographer admits, “It’s getting embarrassing. I take about a thousand pictures for a lot of them.”

People often find Cass’s work funny, but they can’t always tell him why. His photographs are elaborate riddles, and it’s up to us to figure them out. “It made me very happy when I published some work in the British tabloid The Daily Mail and was described as a ‘trick photographer’ in the headline,” the artist adds. At times, the photographic jokes and puns even catch him off-guard. “Every picture I do is a surprise,” he says. “There are so many visual rhymes and coincidences, and they always surprise me. Sometimes I’ll find two different players in the exact same spot at different times but in the exact same pose. It’s a little spooky.” 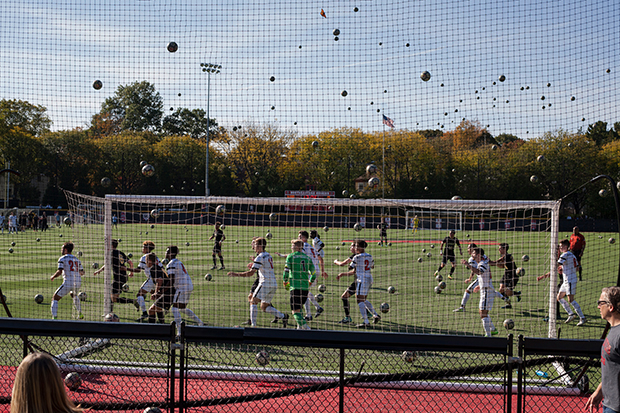 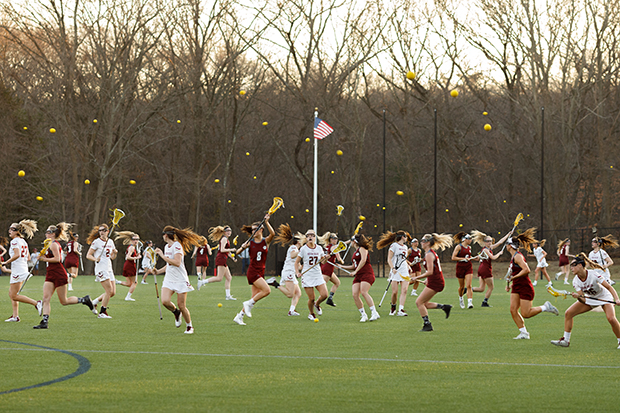 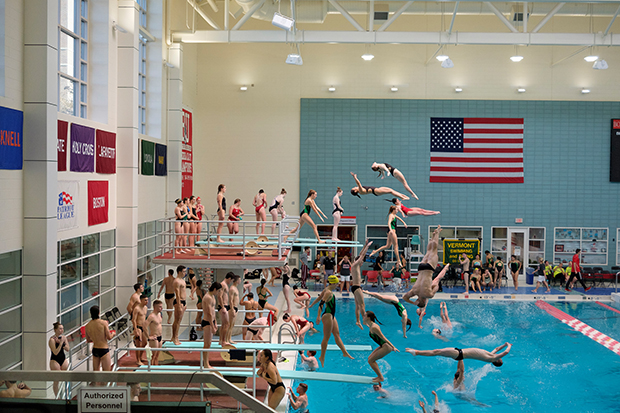 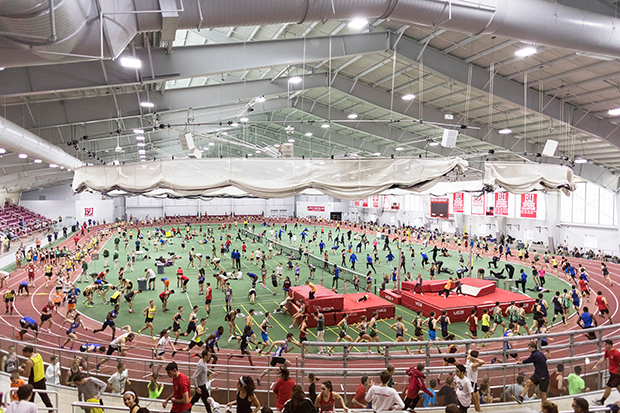 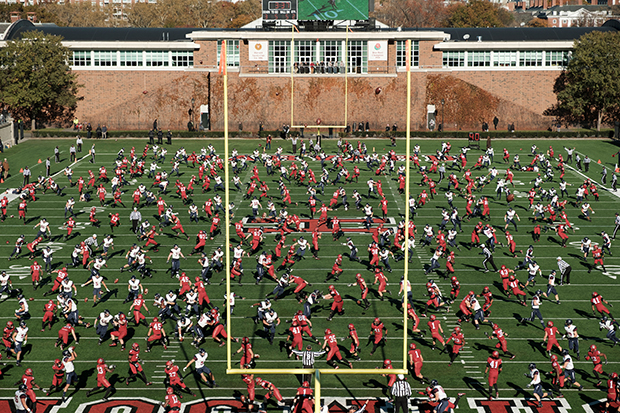 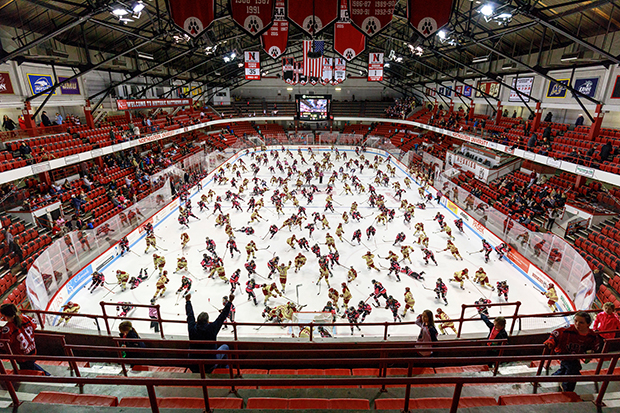 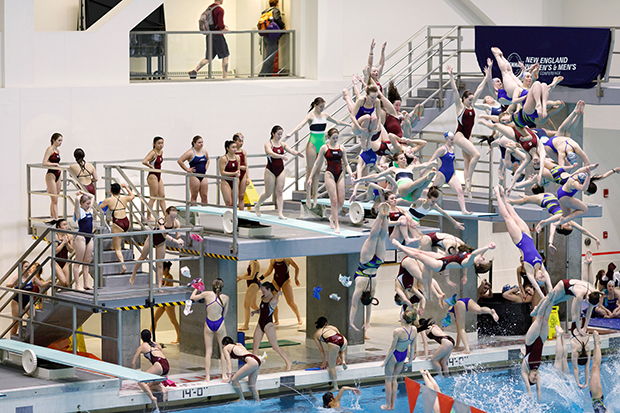