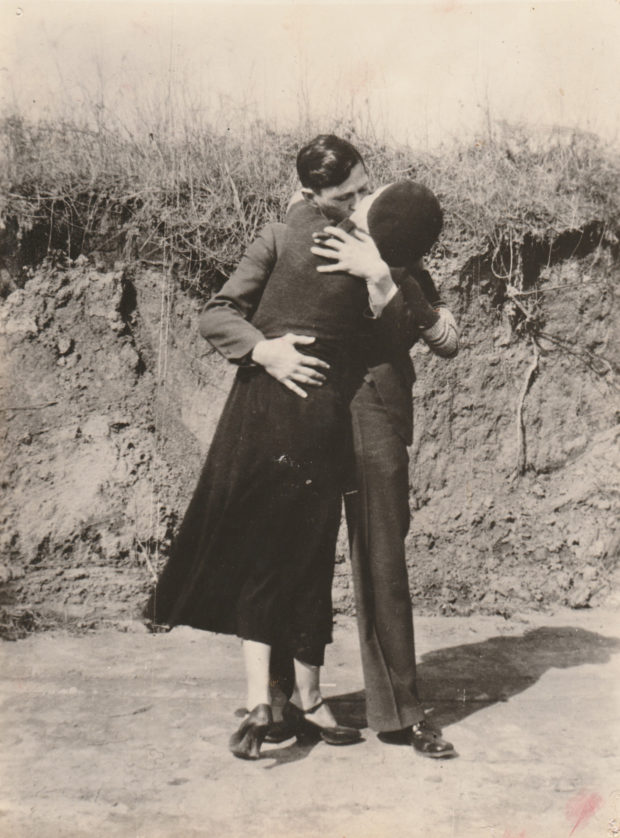 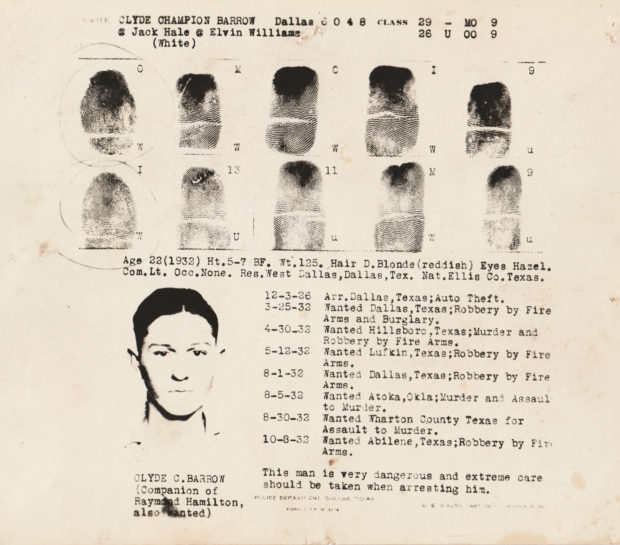 There is nothing more American than the anti-hero, the fearless, go-for-self radical who rejects all social norms, subverting the system in order to win by breaking the rules. They occupy a space that defies the paradigm of villainy, inspiring a legion of fans and followers to cheer them on to what is very often an unfortunate fate. Though they may be amoral, immoral, and unethical, they tap into the urges of the unchecked id. Let’s call it vicarious living at its most primal state – that which few would do themselves but would gladly enjoy via proxy.

Bonnie Parker and Clyde Barrow embodied this to the fullest extent, adding the added touch of romance to the primordial death wish. During the “Public Enemy Era” of the 1930s, when the nation was reduced to tatters and desperate living, criminals became the new superstars, proudly flouting their ill-gotten gains. While high profile gangsters like John Dillinger and Al Capone kept the public mesmerized with high profile affairs, a couple of regular folks named Bonnie & Clyde quickly became household names.

They were barely out of their teen years when they met in 1930 in East Dallas. Clyde, already an ex-convict, was re-imprisoned for auto theft. Bonnie got on her game and smuggled a gun into prison so that Clyde could escape and be reunited with the one he loved. After being caught and sent back to jail, he was finally released in 1932 – and that’s where our story begins.

For two years, the pair went on a crime spree, heading up the Barrow Gang that took to bank robbery and murder like a duck to water. They lived on the run until time ran out. On May 23, 1934, a team of lawmen ambushed the couple of Highway 54 and fired 107 rounds of bullets in less than two minutes. Both Bonnie and Clyde were hit some 50 times each. Though their lives on earth had ended, their legend lived on, becoming the subject of film, theater, television, and song. There’s even a Bonnie and Clyde Festival held every year on the anniversary of their death in Gibsland, Louisiana, the town closest to the ambush site.

That Bonnie & Clyde have achieved cult status speaks to a profound American impulse to celebrate the space where violence and romance intersect eternally in death. Let’s face it, this is the land of mass killings and suicide pacts, of people who would rather go out in a blaze of gunfire than to suffer the indignities of old age. They embodied the ethos, “Live fast, died young, and leave a beautiful corpse,” going so far as to evoke a fascination with death scene photography.

In celebration of this star crossed pair of lovers, PDNB Gallery, Dallas, presents Bonnie & Clyde: The End, the very first exhibition of historical photographs drawn from the collection of Burt Finger, Gallery Director, which just closed. The show focused on the aftermath, with vivid depictions of the crime scene and the post mortem that may have been difficult to view.

But as with much vintage black and white photography of the period, there is something both real and unreal about the work, something that feels like we’re looking at a movie, or even a painting, rather than a historical document. Though the photographs are not overtly stylized in the manner of the film noir work of the period that could regularly be found in newspaper photography, the sense of myth pervades the pictures so that it becomes a bit surreal.

Yes these are real people and yet, they aren’t simply that. They are now icons whose lives are not nearly as fascinating as the shadows they cast. To see them as real people would be to remind us of the banality of evil, of the tragic waste they laid, and the horrors of their crimes. As with most legends, no one really wants all that. They want the pleasures that cognitive dissonance afford us by avoiding the discomfiting spaces of reality. The photographs and documents in the show brilliant give us a peak at this truth and also maintain the illusions we so long to hold. 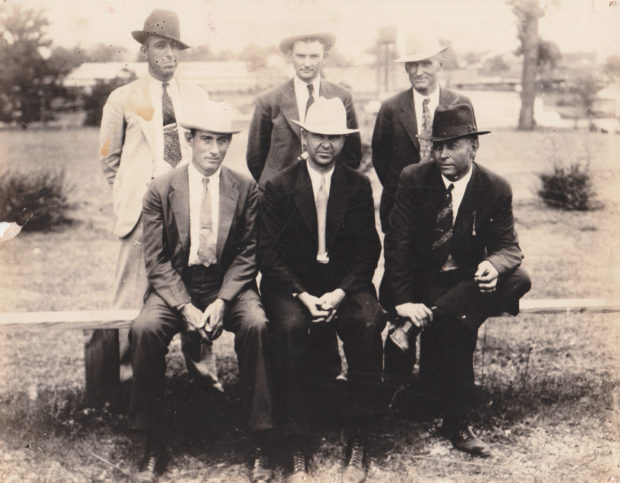 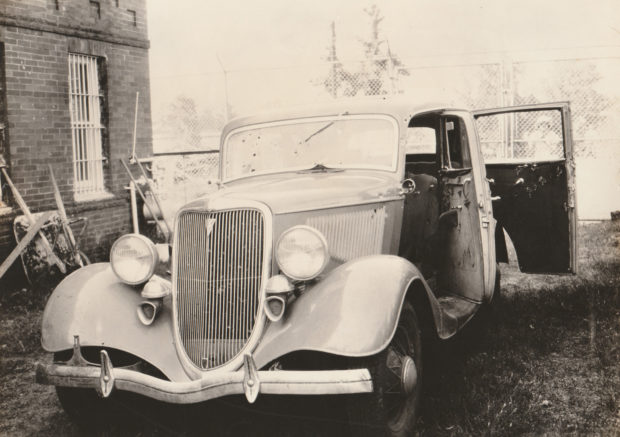 Anonymous, The Automobile of Bonnie & Clyde, 1934. 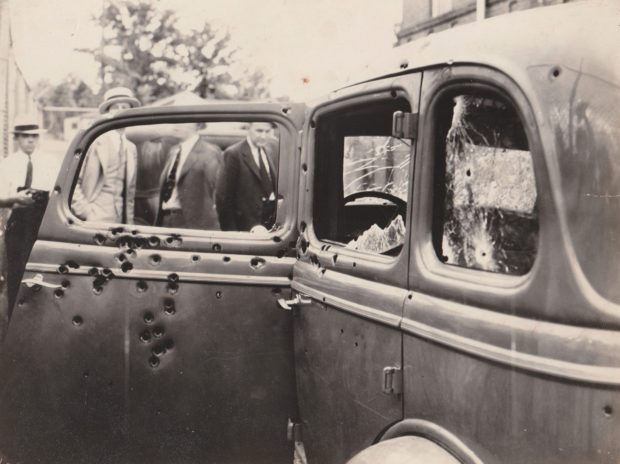 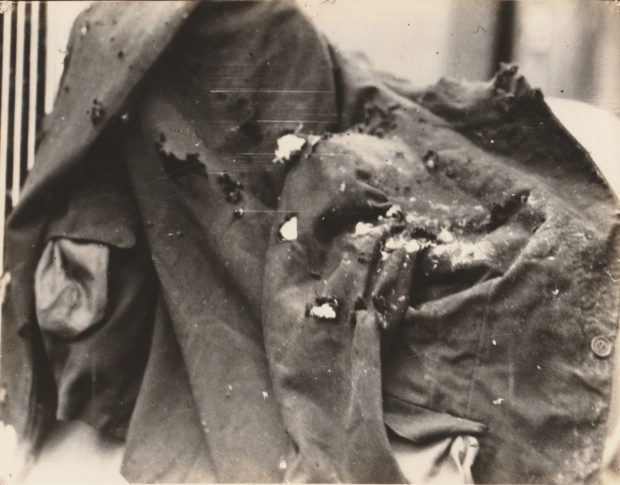 Anonymous, The Jacket of the Infamous Clyde Barrow, 1934. 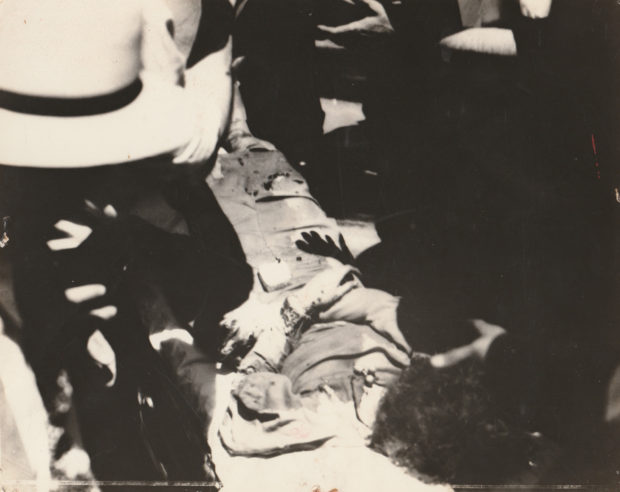