The ‘Illegal’ Project Sheds Light on the LGBT Community of Nigeria 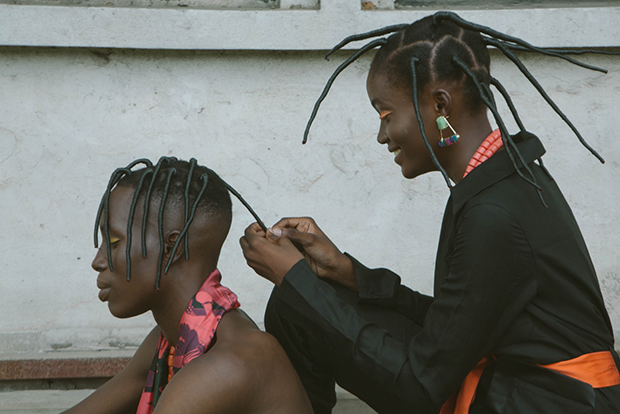 The new generations of African creatives have been able to offer a more authentic, accurate and multifaceted version of Africans who, despite their strong ties to their history and cultures, remain connected and in conversation with the rest of the globalized world.

While a lot of contemporary African photographers are driven by a need to move away from the stereotypes that have always existed in Africa since the “discovery” of the continent by European colonialists, a lot of the same photographers also have made it a point to also criticize the oppressive systems within their own communities. Corruption, political oppression, gendered violence and homophobia are things that African artists like Ousmane Sembene or Zanele Muholi have talked about through their work in the past, sometimes to the point of said work being banned due to controversy in their respective countries.

Today, more young artists aim to contribute in a similar way. Daniel Obasi is a young Nigerian artist who, despite still being early in his career, already has an impressive resume. He worked with some of Nigeria’s most talented and sought-after fashion designers (Orange Culture and Maxivive, just to name a few) and has been published in publications like Hunger Magazine. In an editorial he shot and styled for the African luxury retailer Oxosi, Obasi comments on the discrimination faced by the LGBT community in Nigeria and the policing of sexuality and identities in the country.

How would you describe yourself as an artist and when did you start?
“As an artist I would say I am gradually learning, especially with my work. I tend to focus on identity, gender, sexuality, androgyny and fantasy. I try to relate my personal experiences and the things I come across daily with my work.

“I remember in 2014 when I got into the university, that was first real exposure to fashion. I started off as an intern for fashion weeks, then moved on to working as an assistant stylist with Funmi Fagbemi of VR Creative Agency; we worked on a few projects together before I sort of took a leap on my own into styling and art direction in 2015.

“In 2016 I got the chance to style and art direct Maxivive‘s collection and presentation for Lagos fashion week. That was a major highlight for me because of the amount of work we put into it. I ventured into photography that same year, but mostly for my personal projects; you see, I never saw myself as a photographer. Still feels strange to me. I have had my days of many mistakes (trial and errors) but just trusting my guts that I am doing the right thing.” 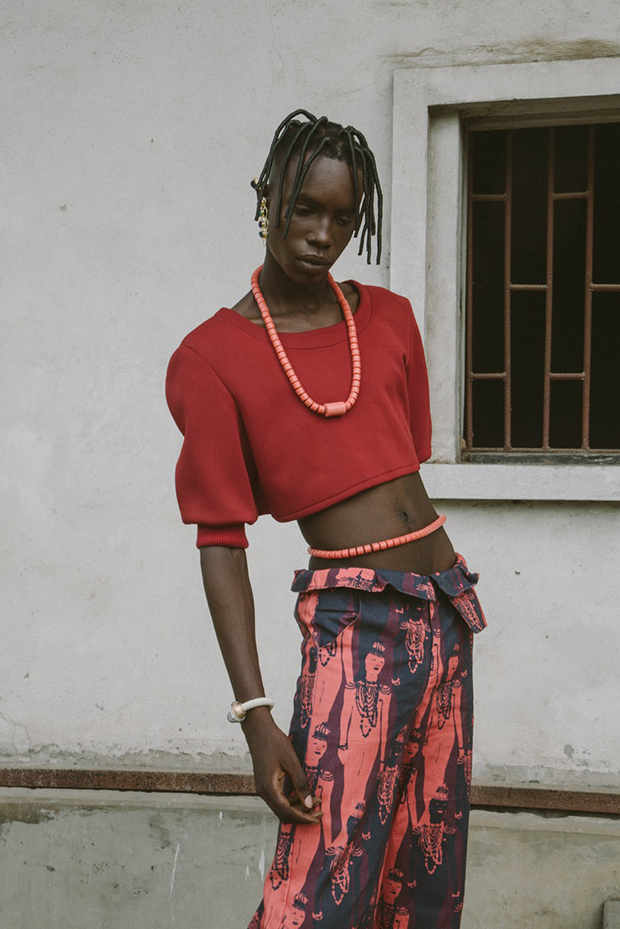 Why did you decide to do something like the illegal project and what do you hope will it bring viewers?
“The illegal project was commissioned by oxosi.com, an e-retail space concerned with African brands and talents. I was working for them to create viable content around Lagos’s growing fashion and art scene; the illegal project was on one of the projects we decided to create to shed light on the state of queerness and the laws against it in here in Nigeria; I personally wanted to explore the idea in a way that I felt would focus on the beauty and possibilities of a gender- fluid contemporary Nigerian society.”

“For what the response would be like, I could never have predicted this widespread success, beyond just the numbers and more the impact on a personal level. I have gotten tons of messages and emails about how the work offered a refreshing point of view to being African and gay. I remember when we made the film and editorial I felt like I restricted myself so much and was not sure if I did justice to subject in any way. I also didn’t think a lot of people would see… but I guess the Internet has its ways.”

Do you think art and photography in particular can have a positive impact on how this marginalized community is treated in Nigeria?
“Images have a way of creating a perception with people. With art and photography, I believe we can create a truth that is long lasting, focusing on the innocence and the realities of the situation in Nigeria. It’s not going to change anytime soon but I feel with persistence, patience and courage, some amount of success can be achieved. Again you would need to be careful with how the stories are told in order not to endanger the people involved. It’s like a quiet activism that first starts like an appeal to people’s mindset before developing into a loud confrontation.” 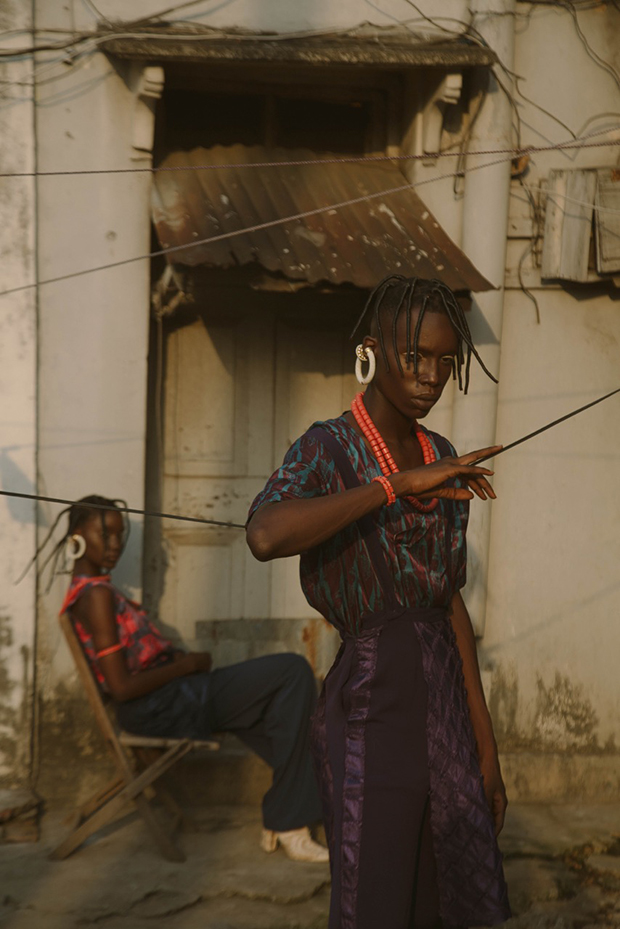 Do you mind telling us a bit more about your creative process? What were some of the inspirations behind this shoot?
“My creative process usually starts around the idea or the brief at hand. I am very much into old cinema and old books so I tend to create my style to feel cinematic, especially with the outlook of the photographs. With a brief what I do is develop my mood board and colour palette for the project. I try to draw up a storyboard and cast the models I feel are ideal for it. Then I build the looks around the characters I want them to represent in the story, so even with my styling everyone looks different but represents something.”

With the illegal project, I used a lot of symbolism, carefully built my inspiration around the Nigerian culture in order to make the story specific and relevant to the place it was coming from. The prints, the hairstyle, the accessories, and even where I shot the project are strategic elements of the Nigerian history and culture.”

As this project shows, you are also a fantastic stylist. How important do you think style is in photography, especially with this kind of project?
“Like I mentioned earlier, symbolism was a heavy part of this project. The right cultural representation mattered in order to deliver the message. We tried to pull in androgyny and traditional style to create something Afro futuristic. We wanted to explore along the lines of a make-believe place or time ideal for gender fluidity.

“We pulled pieces from very androgynous brands here in Lagos. Style in photography is really everything, it’s what differentiates a million photographs. With styling you are able to create a mood and a story for the picture…. It brings a certain kind of life to the photograph that stays with you. I feel stylists are really underappreciated, but they are the ones who make an image what it is.” 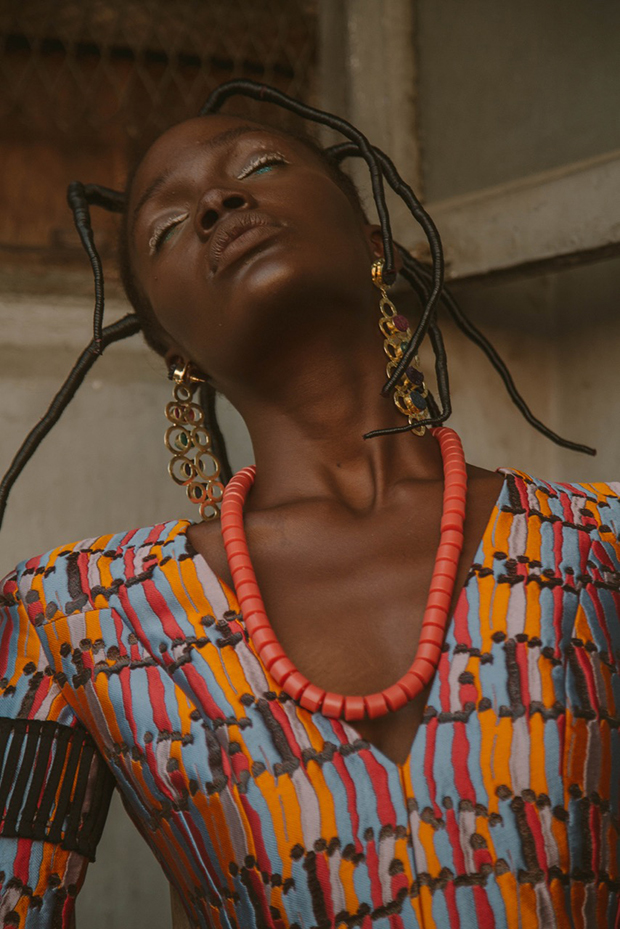 You also shot and directed a film for this project. What did the feel add to the overall mission of the project? Do you plan on shooting more films in the future?
“With the film, I wanted to bring the project to an end and measure the impact so far. Instead it seemed to have started the conversation all over again; more people seemed to understand the editorial a bit more and are rather interested in what the future for gender and sexuality-related projects in Nigeria will look like.

“Yes, I do plan on doing more films.”

Your project touches on the violation of the rights of the LGBT community in Africa (Nigeria specifically). What do you think can be done in order for Africa to be more accepting of different identities?
“To be honest, it’s a lot of work, because of religion and traditions; it’s not something that can change overnight. People needed to be gradually educated to recognize and be more accepting. Forcing it down people’s throat will only make it worse; more films and books need to include queer African characters. You need to get into the educational system; that’s where the real change on identities can be done.” 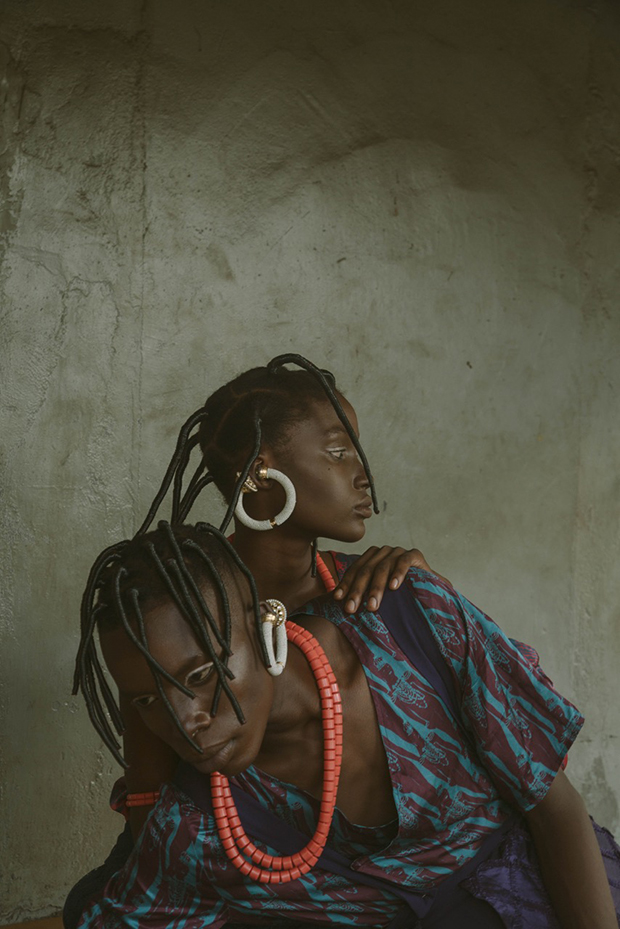 Which other African creatives do you think are doing a good work of highlighting the LGBT community?
“Kristin-Lee Moolman, the South African duo FAKA, Ib Kamara, and a lot of young talents on social media.”

What is next for you? Do you plan on creating work with a similar theme in the future?
“I am preparing for a new body of work (can’t say more that). Hopefully I get the opportunity to create something like it again, but I doubt it will feel the same, to be honest.”