Coming of Age as a Girl in Gaza, in Photos 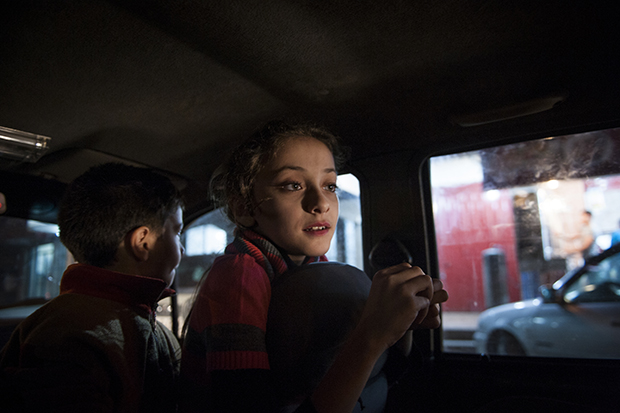 Yara and her brother waiting for their father to return with schwarma as an evening treat after a recent conflict ended. 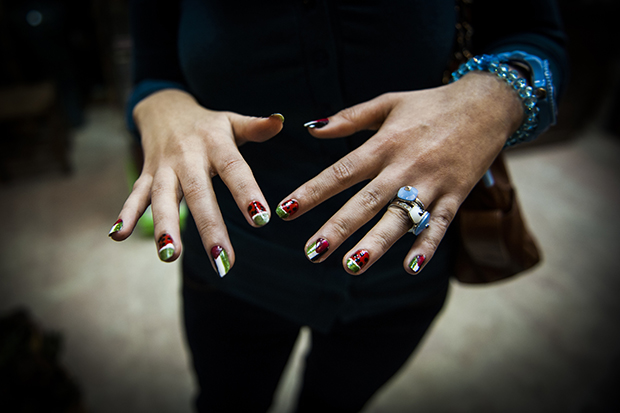 When the Istanbul-based photojournalist Monique Jaques traveled to Gaza in 2012, she expected to see evidence of violence and war, and she did. But she also saw something else: pieces of herself as a preteen, teenager, and young woman, mirrored in the many girls who called this place their home. Over the course of five years, she came back to tell their stories, compiled in the upcoming book Gaza Girls: Growing Up in the Gaza Strip.

The photojournalist stayed with local families and shadowed the girls as they went about their daily routines. They went to a nearby cafe. They visited the mall, or they took a taxi to the beach (the latter, Jaques says, is “the only place where people in Gaza feel free”). They chatted about their lives. She ate with them too— “a mix of Mediterranean and North African food with local spices like zaatar.”

Jaques pursued the Gaza Girls because she recognized herself in them, and she identified with them more over time. Still, reminders of more painful realities of life in Gaza were inescapable: blast walls, barbed wire, the persistent murmur of drones. It’s hard, if not impossible, to leave.

“Gaza is an incredibly difficult place to live,” Jaques writes. “I want to talk about how it’s more difficult for women. It’s much more complicated to find yourself in a place as tight and watchful as Gaza, with your prying neighbors and controlling brothers. It’s harder to learn and grow and very difficult to make mistakes.”

Due to restricted space and cultural norms, Jaques says privacy isn’t something these girls have, even at the time in their lives when perhaps they need it most. Multiple generations live in close proximity, and gossip is to be expected. As the photographer writes in her statement, “Everyone’s eyes are a camera, recording and judging your actions, possibly reporting them to your family.”

Perhaps Jaques’s (real) camera was different. It recorded but never judged, and in that way, it became an unlikely confidante for this group of girls. The photojournalist offered them a kind of freedom, if not total privacy. Anyone who has ever been a teenage girl will recognize the trust required to make these kinds of pictures. Jaques was permitted into the places where these young women could be unfettered, independent, and true to themselves.

Following the Israel-Gaza war in 2014, UNICEF called what’s happening in Gaza “a crisis for children.” 500-plus kids lost their lives in the conflict, and 1500 lost their parents. 18,000 families lost their homes. These are the facts, and they exist in the background of Gaza Girls, where they linger but never take center stage. Jaques’s photographs are, as she puts it, about the “quieter” moments that never make the headlines.

When the bulk of the journalists left Gaza and turned in their stories, Jaques stuck around. She kept going back. “I was just in Gaza three weeks ago,” she tells me. “The girls are getting older; some are married, are pregnant, or already have children. Some are engaged.” Then she adds: “But they’re all the same girls, still dreaming and hoping in the same ways they always have.”

Gaza Girls: Growing Up in the Gaza Strip will be published by FotoEvidence, with designer Bonnie Briant and a forward by Palestinian-American civil rights activist Linda Sarsour. 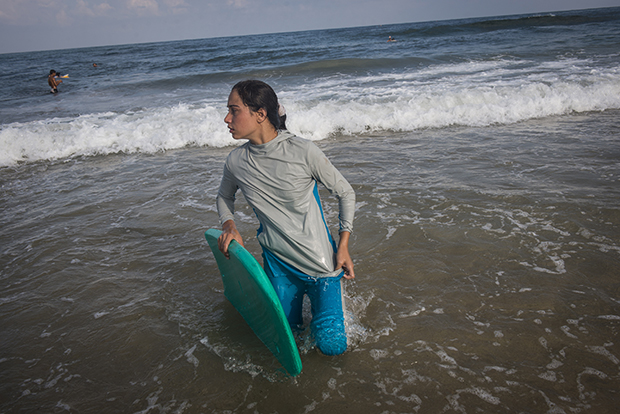 For many Gazans the sea is the only place they can be without being reminded of their isolation. Female Surfer, Sabah Abu Ghanem, 14, and her sister surf early in the morning outside of Gaza city. The sisters place first in many competitions inside the strip, but have never left the Gaza Strip to compete. 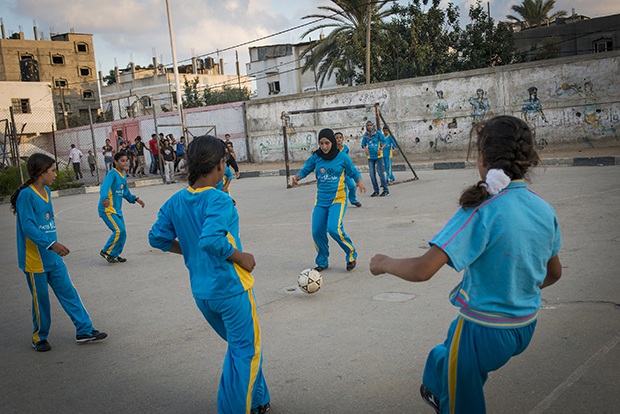 Girls play football in the Northern Gaza town of Beit Lahiyah. Women in Gaza typically do all types of sports until the age of 16, when family pressure forces them to stop as many families seek to find husbands for them. 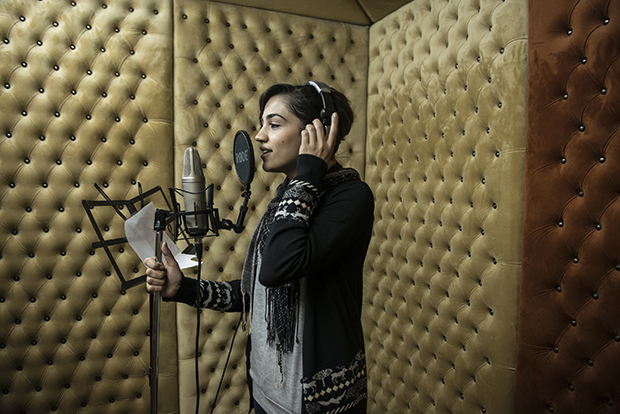 Hadeel Fawzy Abushar, 25, records a song in a studio in Gaza City. Few female singers remain as families and local government look down on the practice. Hadeel started when she was 12, as all of her sisters are singers. 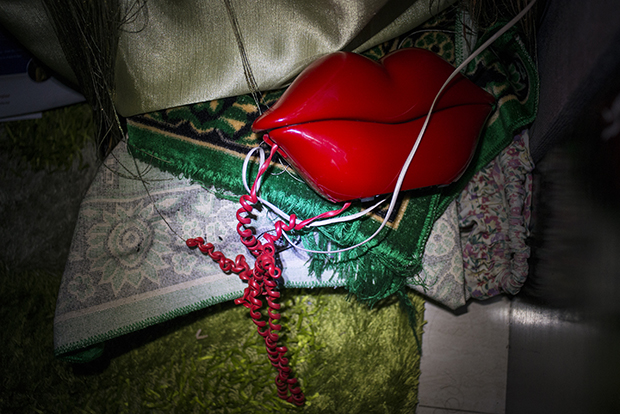 A phone shaped like lips and a prayer rug sit in the corner during a blackout. 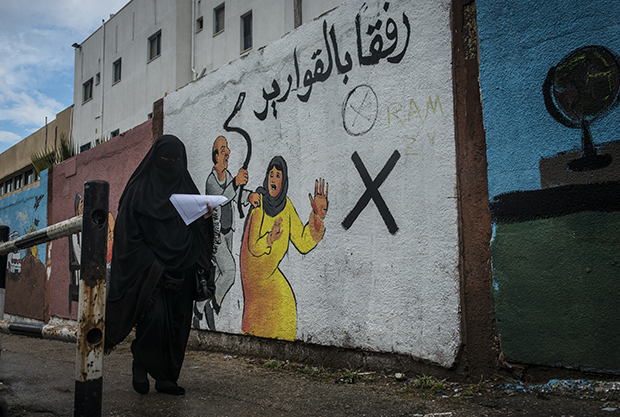 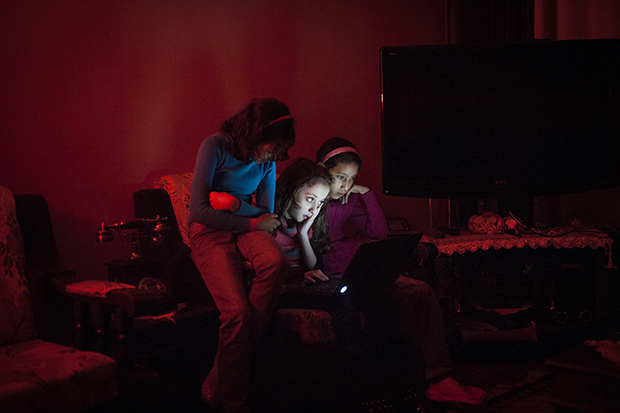 Yara and her friends prepare a dance number during a blackout. Fuel is scarce in Gaza and many families only receive six to eight hours of electricity a day. 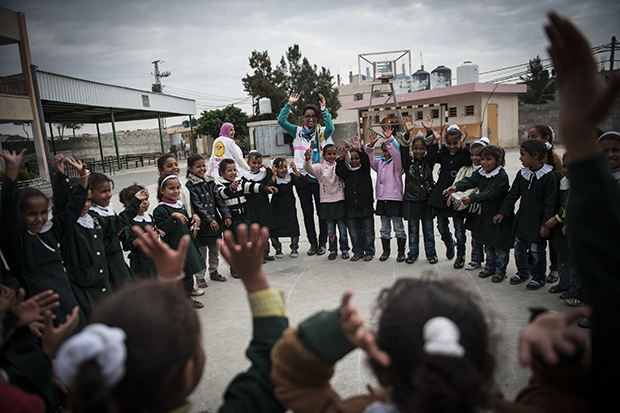 Nisreen Shawa, a worker for the Palestinian Medical Relief Foundation at the Hamza Bin Abd-el Muttalib School where they do art therapy and exercises with girls after the recent bombings. 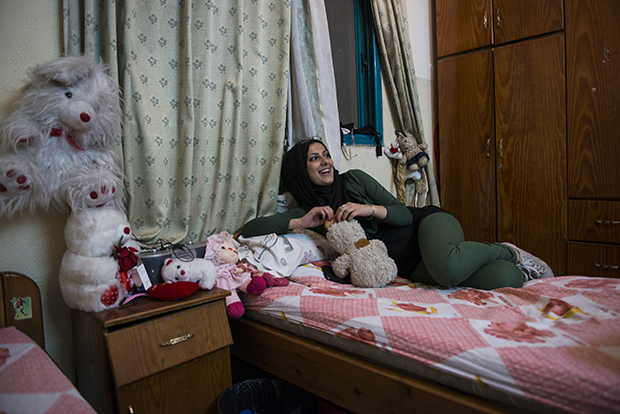 Doaa in a friend’s bedroom. Girls that are un-married have few places to be themselves. Bedrooms and private cars are sanctuaries where girls can sing and dance without being judged by the public, or their own families. 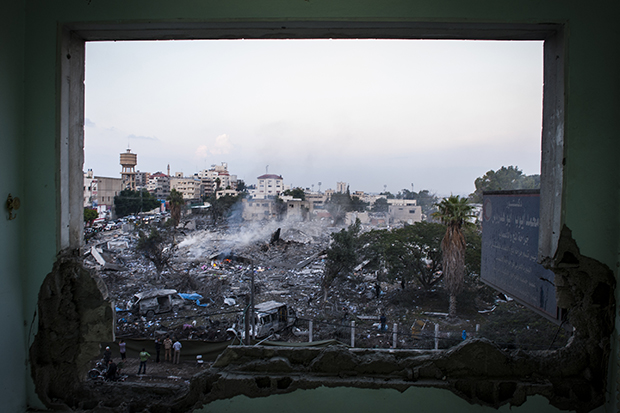 Hours after a ceasefire was declared between Hamas and Israel, the people of Gaza City begin to rebuild. Shops open and families go out to witness the damage incurred by the recent strikes. 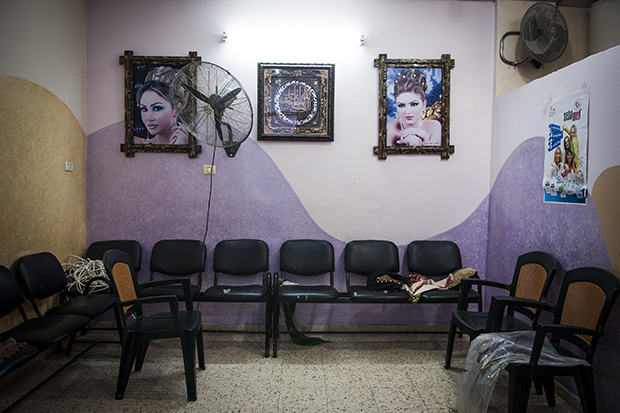 At a salon in Gaza City, women come to get their hair, nails, and makeup done before weddings. In many families, a woman is not allowed to be seen without a veil by a man outside of her family, so beauty salons are for women only. 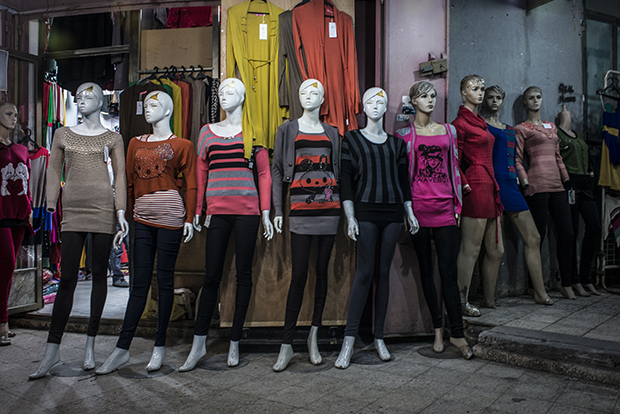 Manequins show off available clothing in a shop near the main street of Gaza. 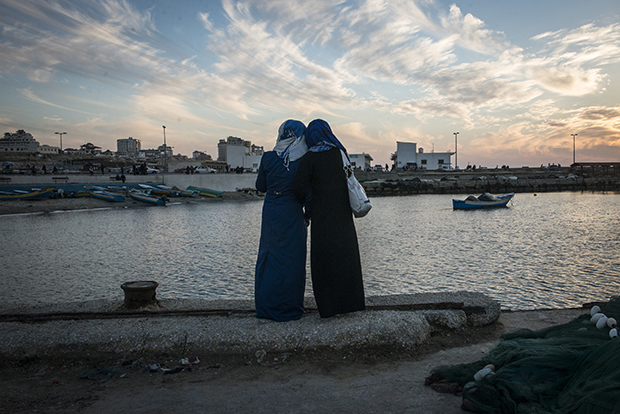 Girls watch the sun set at the harbor in Gaza City. While living in Gaza is undeniably tough, being a woman there is harder.