A Tale of Kindness and Courage in a Ugandan Animal Shelter 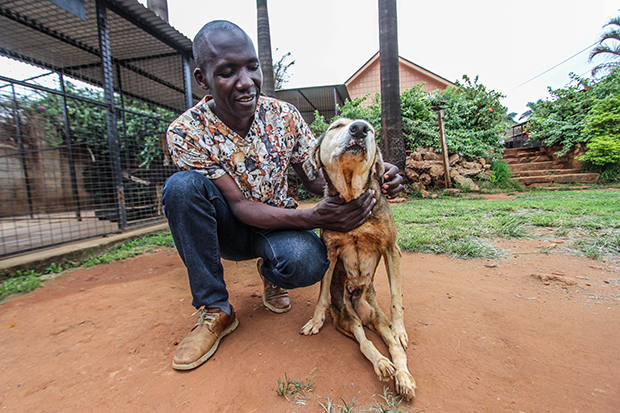 Alex Ochieng is the shelter’s manager. Here, he is pictured with Hope, who was maimed eight years ago when she was hit by a car. She can now only walk with her front two legs. Unfortunately, due to lack of resources and medicine, it is getting harder to care for her, and the shelter is actively looking for someone to adopt her. 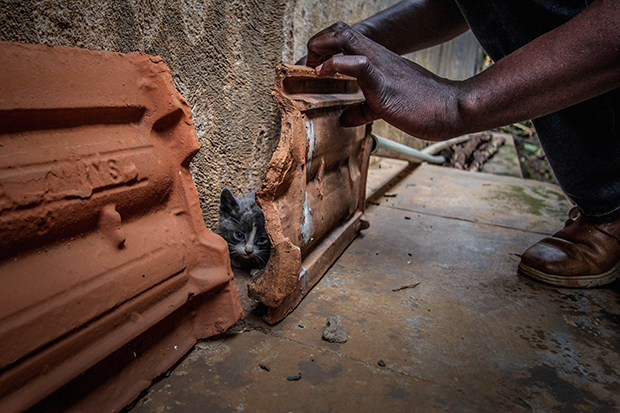 A kitten, abandoned by its mother, is rescued by Alex and taken to the shelter. Alex runs all the rescue missions. 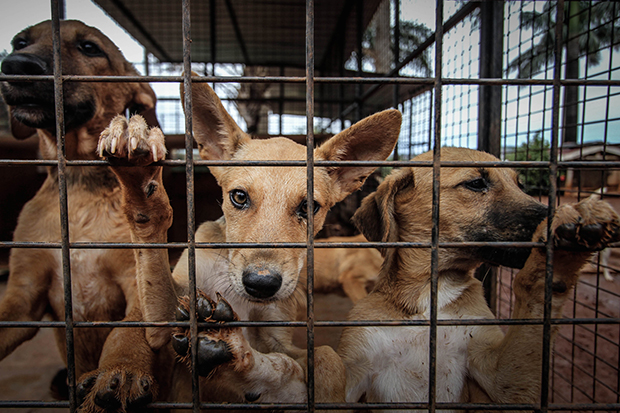 Abandonment is one of the main reasons there are so many dogs in the USPCA.

When Kampala photojournalist Sumy Sadurni first chose to document life inside Uganda’s one and only animal shelter, she thought she’d be telling a story about dogs and cats. And she did, of course, but as it turned out, her story would also be about human kindness.

In developing places like Uganda, the photographer explains, the rights of animals aren’t always valued, and domestic animals aren’t granted the same protections as wildlife. “Daily life for a stray dog in Uganda is about surviving,” Sadurni tells me.

Abuse is widespread, but Sadurni says neglect doesn’t necessarily come from cruelty. The public is struggling to feed and educate their children, and many don’t have the resources to care for pets. Some organizations, including ones affiliated with the government, attempt to curtail the population of homeless animals by poisoning them.

The Uganda Society for the Protection and Care of Animals (USPCA) saves their lives. Every single day, the people who work at the shelter rescue dogs and cats from the streets. Once they arrive, every animal is spayed or neutered. They receive their vaccinations, and any injuries sustained throughout their time as strays are treated.

For probably the first time in their lives, the animals at the USPCA receive regular meals. Adult dogs eat one big meal of meat each day, mixed with posho, a dish made with maize flour. Growing puppies get three.

Although the shelter has many dogs and cats, it doesn’t have the funding to support a large staff, and the small group of people who do work there give a significant piece of themselves to their work and to the animals.

The USPCA helps the community by educating children and families about animals and their care. They reach out and provide veterinary medicine to people who can’t afford it. When the shelter first opened, most adopters were expats, but now, local residents are also bringing animals home and giving them long and happy lives.

Alex Ochieng, the shelter’s manager, invited the photographer to join him on the rescue of three abandoned kittens. Ochieng receives countless phone calls, and he does these rescues about five times every single day, so experience wasn’t particularly dramatic or sensational. It was quiet and moving, and Sadurni will never forget the way the rescuer carefully and calmly tended to the cats.

“It’s very easy to come into the shelter,” Ochieng told the photographer, “but it’s very hard to get out.” About fifteen animals find homes each month, and many more come into the shelter. They’re running out of room, and Sadurni experienced the emotional weight of that reality firsthand when all the dogs begged for her attention.

“You get kisses left and right,” she says of visiting the shelter, “There’s so much pure love.”

And the love is what keeps these people coming back. Sadurni met one dog who was, appropriately, named Hope. Ever since she was hit by a car eight years ago, Hope has been unable to walk on her back legs. She’s been at the shelter for nearly her entire life; her disability has made it hard for her to find an adopter.

Every person at the shelter, the photographer admits, is closely bonded to Hope. She’s a special dog, and although they’ve been waiting for her to find a home for almost a decade, they won’t give up on her.

In the end, Sadurni’s photographs are for and about the animals, but they’re also a testament to the courage and empathy of the people who share their days. Not all of these dogs will be adopted, and some, like Hope, might remain at the shelter for years, but they will know what it’s like to be treated with compassion and grace.

“The hardest part is always walking away,” Sadurni writes. And even after she finishes taking pictures, she will return to the shelter. She wants to volunteer with walking the dogs.

We can help the USPCA today by donating to the construction of a larger and more long-term animal sanctuary and educational facility. You can see their current adoptable animals here. If you’re in the veterinary business, Sadurni suggests donating medical supplies, which are always needed at the shelter. You can also visit the USPCA’s website and follow them on Facebook. 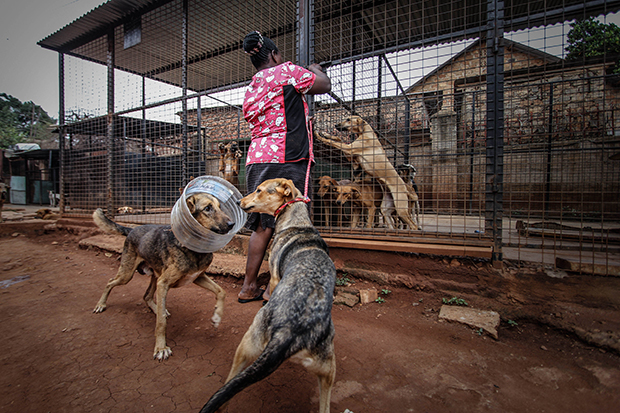 Mary, a full time worker at the shelter, is originally Ugandan, and she loves her job. She now looks after two dogs at home as well as the many animals in the shelter. 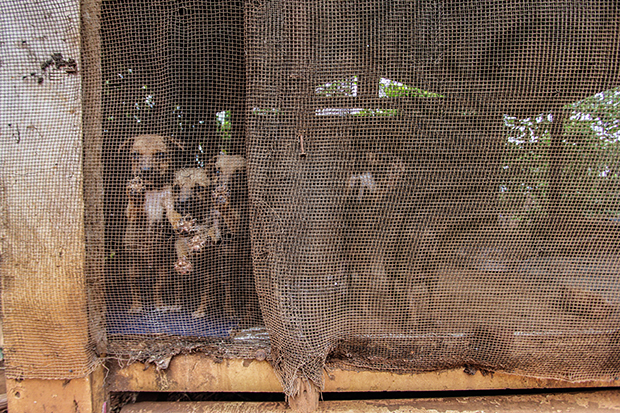 Animals come into the shelter every single day. Newcomers are vaccinated and neutered upon their arrival. 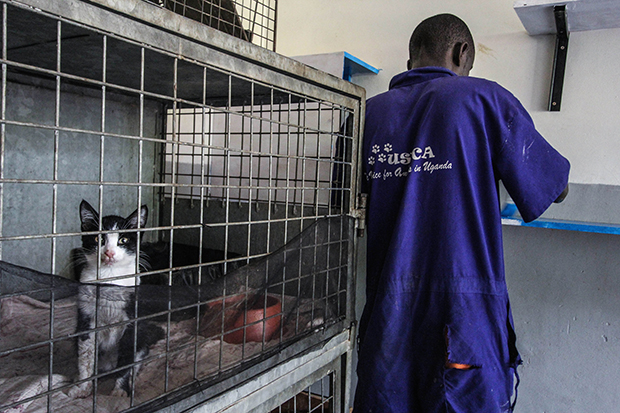 A worker paints the new cat room. The USPCA is hoping that with donations they can move to a bigger area, as the current location is quickly filling up. 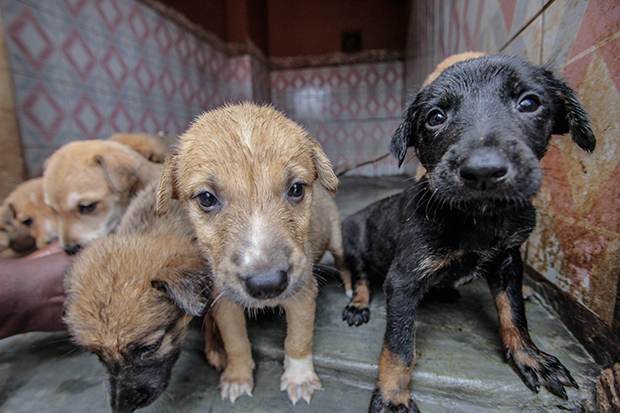 Puppies are fed three times a day, and adult dogs are fed once. 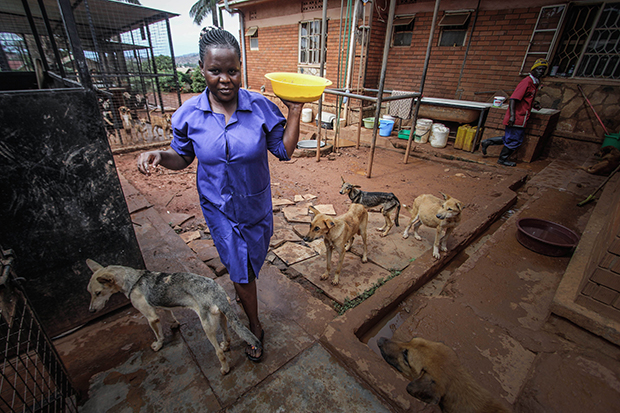 Mary works six days a week at the shelter. She starts early and finishes late. 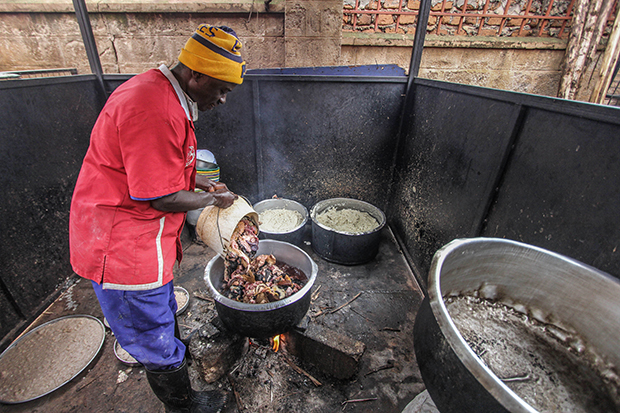 The dogs’ meals consist of meat leftovers and posho, a paste made out of maize flour, a typical Ugandan dish. 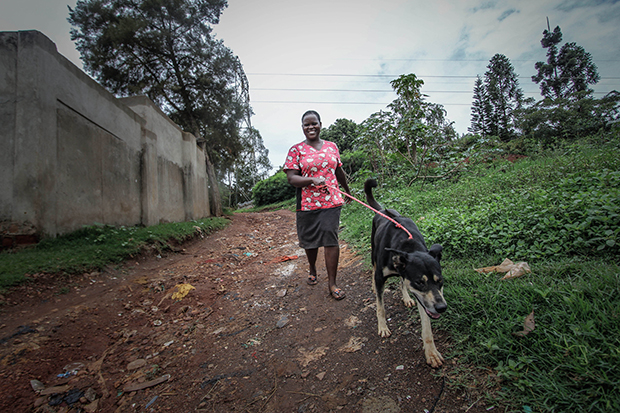 Due to a lack of manpower, only a few dogs can be walked a day- each for half an hour. The USPCA relies heavily on volunteers and donations. 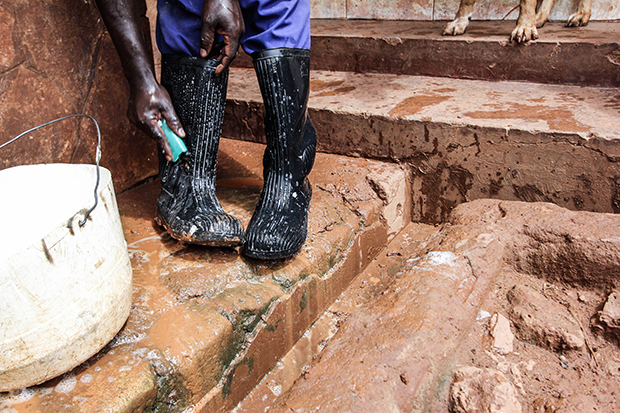 In a good month, around 15 animals will be rehomed.