A Photographer’s Courage at the Frontline in Syria 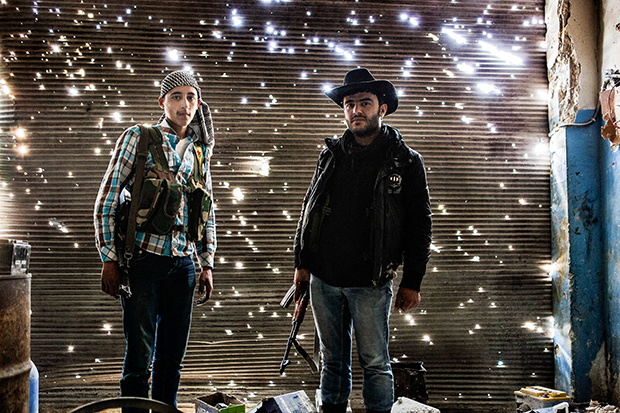 Two YPG fighters stand in a damaged garage in the Sheikh Maqsood District of Aleppo, Syria on April 20, 2013. The YPG (Popular Protection Units) of the Kurdish Democratic Union Party (PYD) considers itself a popular democratic militia with the mission of maintaining order and protecting the lives of those in the primarily kurdish districts of Syria. In March of 2013, the YPG and FSA began to cooperate in the conflict against the Syrian Regime. 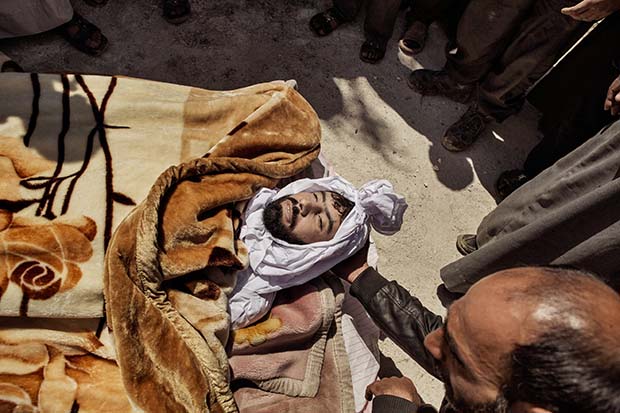 The body of Ahmed Ibrahim, 25, before his burial in the Cemetery of Martyrs, Aleppo, Syria. Ahmed was an FSA fighter killed in clashes with Regime forces on April 23, 2013.

On the other hand, he’s also watched football, eaten fresh olives and hummus, passed by vendors selling cotton candy. When there are puddles of blood in the street, he says, people step over them. Life in Syria goes on because these families have no other choice. People fall in love and get married. They have children; Nalbandian has seen newborns sleeping in hospitals.

A Whole World Blind: War and Life in Northern Syria, published by Daylight Books, is the result of three years spent following the war in Syria. Nalbandian’s own grandfather, a refugee himself during the Armenian Genocide, once lived in Syria. He first visited and forged friendships in Syria in 2009, two years before the war began.

In Syria, the photojournalist suggests, trauma and banality are constant fellows. While making pictures, he risked his life—he hid behind busses to avoid snipers and squeezed through fighting holes— but he also had to stop for gas.

In his essay for the book, Greg Campbell writes about the dangerous photojournalists face, especially in the digital era. They’re targeted, killed, kidnapped, filmed.

In his three-page introduction to the book, Nalbandian uses the word “guilt” three times. He feels guilty for being just out of reach in a nearby explosion; he feels guilty for being able to return home safely. It’s something many photojournalists have said; bearing witness takes a lifelong toll that the rest of us can never understand.

In conversation with Smithsonian.com, Nalbandian says, “Regardless of what anyone says, none of us HAVE to do this work.” Recording war and conflict is a choice, not a mandate. Still, reading A Whole World Blind, it becomes clear why the photojournalist does what he does.

He remembers the time a sixteen year old hospital worker named Mohammed showed him the severed body parts of young children in the morgue in hopes that he would share with the world what he saw. The brother of a slain Opposition fighter asked Nalbandian to photograph his brother, named Ahmed Ibrahim, one last time at his funeral.

Despite all the guilt and all the horror, A Whole World Blind is at least in part a book about redemption. When people asked Nalbandian to tell their story—whether it was about a wedding or a funeral— he followed them and listened. 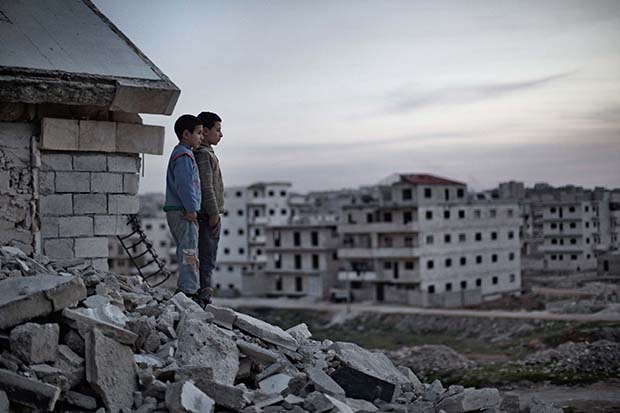 April 5, 2014, Maarat al-Numaan, Idlib. At the time I made this picture, the area was controlled by Jamal Marouf’s Syrian Revolutionaries Front (SRF) but was still contested by Syrian Government forces from their Wadi Deif and Hamadiyah bases about 2K away. SRF, which had recently displaced ISIS from the area, was itself displaced by Al Qaeda Affiliated Jabhat al Nusra (JAN) later in 2014. Wadi Deif and Hamadiyah bases were captured by Islamist rebelsincluding JAN and Ahrar ash-Sham in December of 2014. 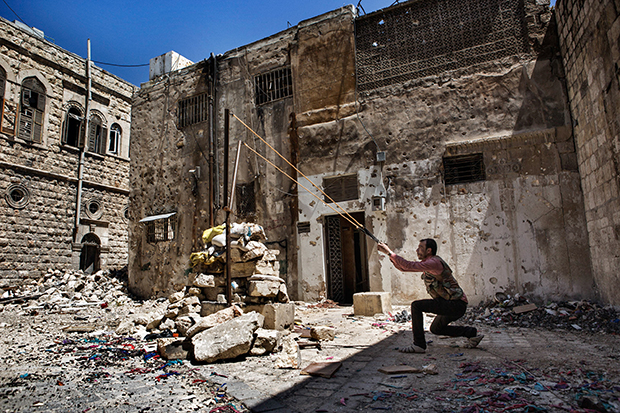 An FSA Fighter prepares to fire a rock with a slingshot toward Syrian Army positions in the Old City of Aleppo, Syria on April 25, 2013. The historic Old City, A UNESCO World Heritage Site, has sustained a signficant amount of damage during fighting between opposition groups and the Syrian Government during the country’s bitter Civil War. 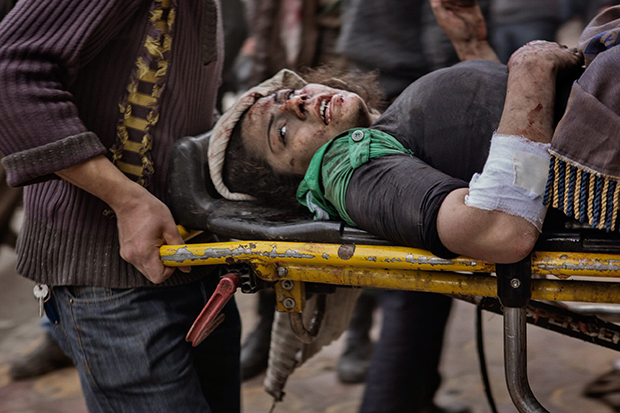 A woman injured by Syrian Government shelling lies wounded on a stretcher outside of a field Hospital in the Shaar district of Aleppo, Syria on February 10, 2013. 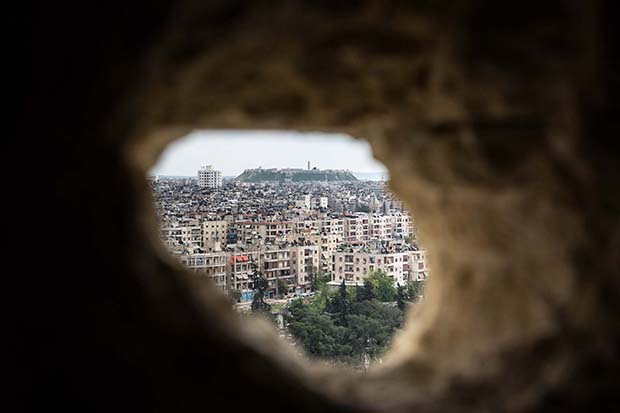 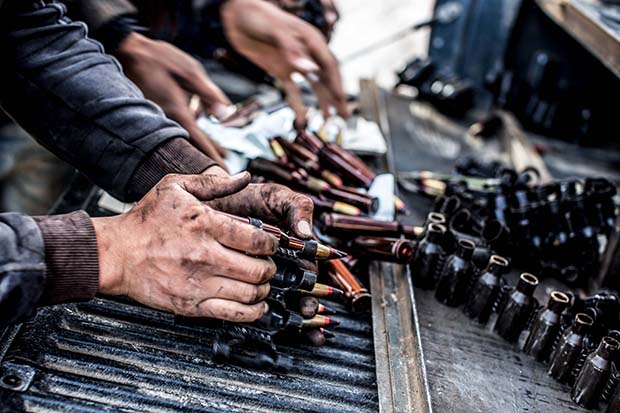 SRF Fighters load ammunition for an operation at their base in Deir Sunbul, Idlib, Syria April 7, 2014.
The SRF or Syrian Revolutionaries Front is a moderate Syrian Opposition group fighting against both the Syrian Army (SAA) and The Islamic State of Iraq and Sham (ISIS). SRF is headed by Jamal Marouf. 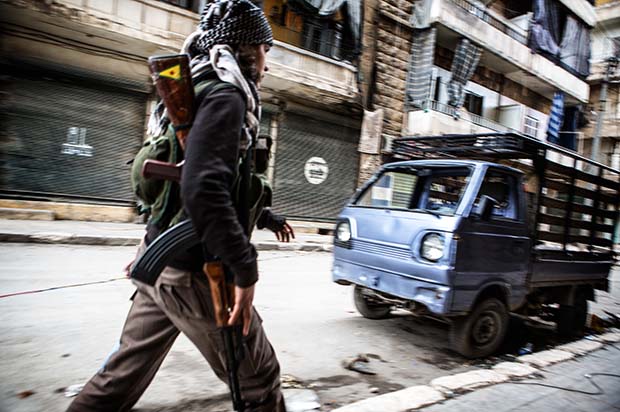 A female Kurdish fighter named Garee hurries toward her headquarters in the Sheikh Maqsood district of Aleppo, Syria on April 19, 2013. 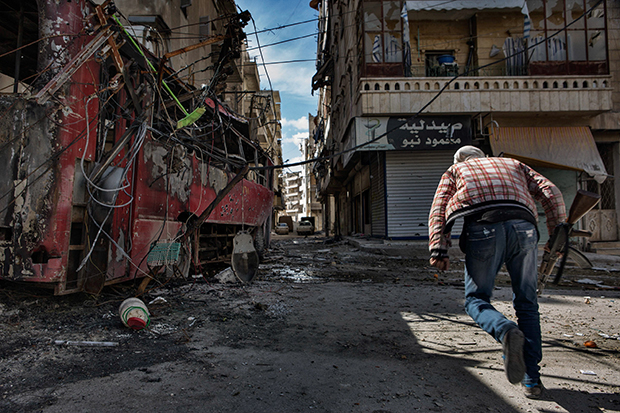 A YPG fighter sprints across an intersection to avoid Syrian Government Army Sniper fire in the Ashrafieh District of Aleppo, Syria on April 20, 2013. 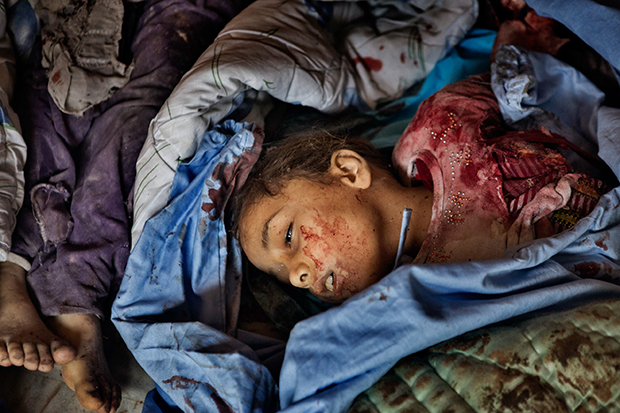 A girl lies dead in a makeshift morgue, part of a field hospital in the Shaar district of Aleppo, Syria, February 10, 2013. 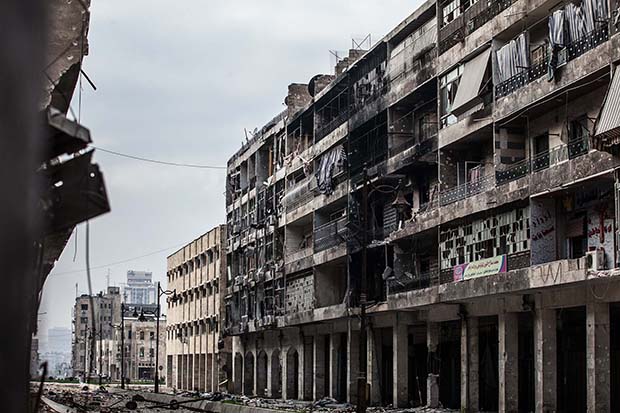 February 10, 2013, Al Farafirah, Aleppo. Apartment buildings, offices, and stores along Al Mutanabbi Street, damaged by heavy fighting between Syrian Government troops and Opposition forces during clashes in 2012. By 2013 this area had become a perpetual front line. In the background you can see the Aleppo City Hall building, from which Syrian Government snipers controlled the area. 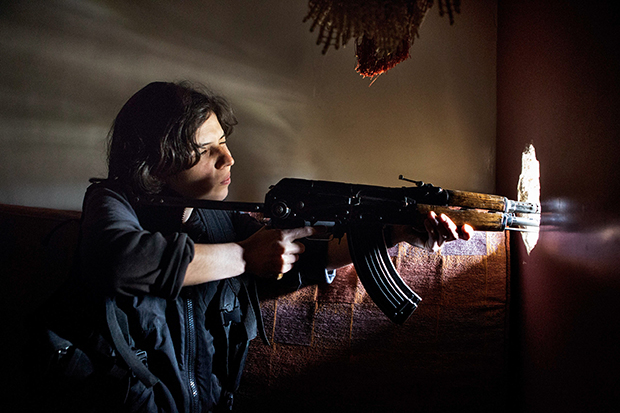 Rukan, a female YPG fighter and unit leader aims her weapon from a fighting position in the Sheikh Maqsood district of Aleppo, Syria on April 19, 2013. 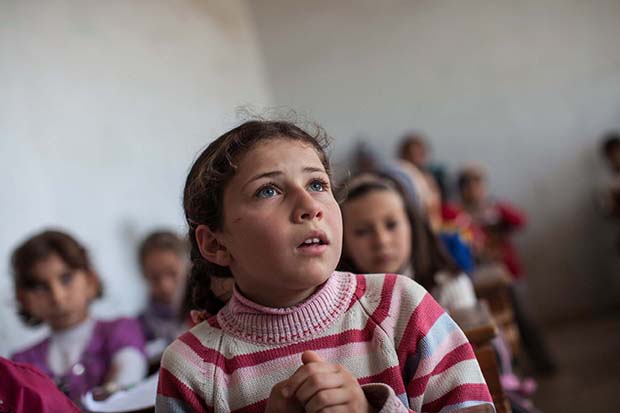 A girl answers a question in class at a school in Maarat al-Numan, Idlib, Syria, April 6, 2014. 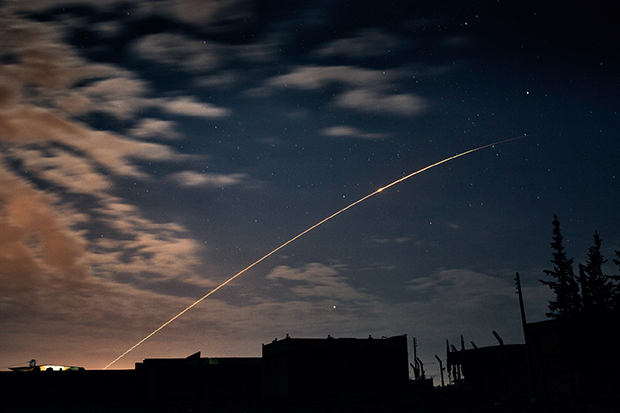 A Missile fired by Syrian Government forces flies in an arc over Aleppo toward the north on the evening of April 18, 2013. Syrian government shelling is an ongoing constant in the country’s brutal Civil War.

All images © Nish Nalbandian from the book A Whole World Blind: War and Life in Northern Syria’ by Daylight Books