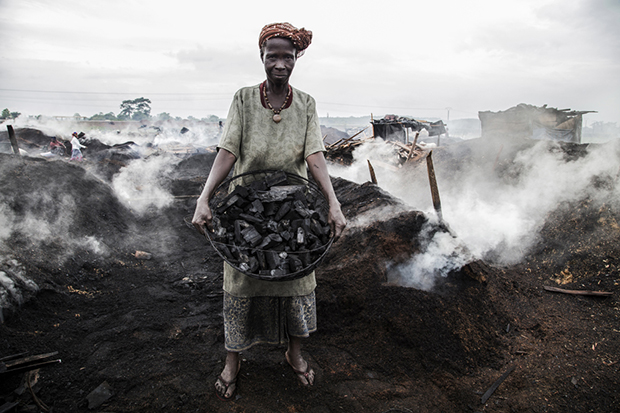 Parc du Pont”, San Pedro – Makandjé is the leader of the women’s association of Parc du Pont. In 1998, Makandje was the first woman to work in the production of charcoal in the area of San Pedro . She had to face the hostility of male workers. She started her activity by assisting male charcoal producers. Today, she owns an oven. She financially supports her family and encourages other women to empower themselves financially by producing charcoal. Makandje is mother of 4. 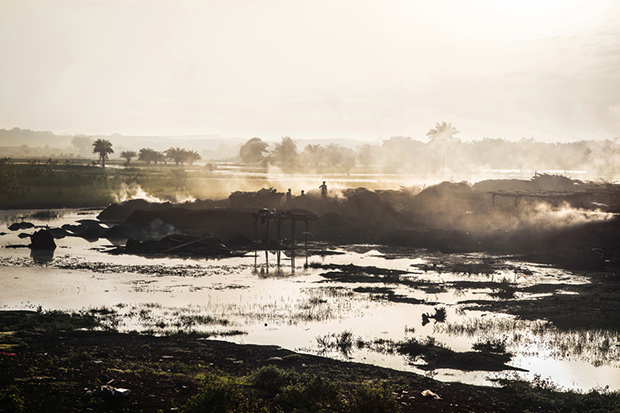 Parc du Pont, San Pedro, 07:04 AM: Women working together to help each other early in the morning. They are collecting the charcoal. In the rainy season, the stagnant water considerably restricts their field of work. The access to their ovens is more difficult. Stagant waters facilitate the proliferation of mosquitoes and malaria.

“‘Sisi Barra’ means ‘the way of smoke’ in the Bambara language” says Ivorian photographer Joana Choumali. Her project of the same name examines the economic exploitation of the invisible women in San Pedro, Côte d’Ivoire, and the social stigma and multidimensional violence this exploitation encompasses. The women portrayed are making wood charcoal for big cooperations in order to make ends meet.

In 2011 Joana was in San Pedro on a photo assignment. She passed by a park at the entrance of town, “an immense expanse of coal-black soil, and hundreds of busy people around smoke-filled ovens. I noticed that these were mostly women”, says the artist. Intrigued by the contrast between the hostile environment and the presence of women—many of whom were adolescents and little girls—the artist wanted to know more. After several trips over the course of three years she created a body of photographs of these women, many of whom suffer from health problems associated with the inhalation of smoke and dust.

Women face multidimensional social issues in this rural region of Côte d’Ivoire, including a lack of education and gender violence. Often this precarious career path, working near ovens covered with wooden sawdust, is passed down from mother to daughter, meaning professional aspirations are cast aside. Social convention has confined these women to the bottom of the heap, and their future prospects look gloomy.

The photographer was impressed by resilient individuals such as Makandjé, the eldest of the women and president of the Women Coal Producers Association of “Parc du Pont”, who ceased to be an invisible subordinate to men when she started her own oven. She has inspired many others to follow her lead. “Some women like Makandjé are widows” explains the artist, “some are part of a polygamous marriage, or have been repudiated … Except for one, Awa, they have no qualification, and have no choice but start to work on this field to survive”. She elaborates: “The suffering of these women is tangible and their penetrating and fierce glance acts as a symbol of courage, endurance, resignation and oppression”.

The images were captured in the three main communities of “Parc du Pont” in San Pedro. Joana communicated her idea through a spokesperson on her first visit, and started photographing the women on the second trip. “At first, there was a lot of mistrust because many said that several photographers had come to make pictures and never returned there after”, says the artist, “It took time to build confidence”. Each shooting day was spent in the workplace, focusing on four women of different generations with different aspirations: Makandjé, 57, “the pioneer”, Awa, 42, “the Spokesperson”, Habiha, 42 “the ambitious” and Mai, 16, “the future bride”.

The Magnum Foundation Emergency Grant Joana has enabled Joana to produce to address this story, “a story that (until now) has not received the attention it deserves”. She hopes that the publication of this work will raise awareness for the plight of these women and encourage NGOs to bring aid to these communities. The prime objective of Sissi Barra is to give these women the opportunity to share their life stories beyond charcoal factories, “to make them go from pariah to women empowering themselves”. 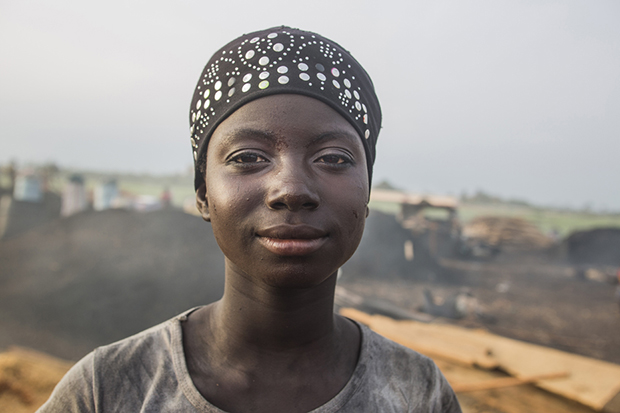 “This 14 years old girl works at ‘Parc du pont” in San Pedro all day long. She asked me to take her portrait and bring her a print as soon as I could”. 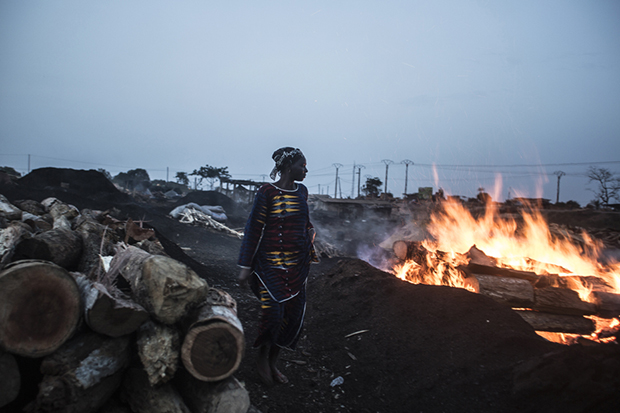 At Parc du Pont, San Pedro, 6:24 AM in the morning. A woman discovers an accidental fire on a co-worker’s stock of wood. She will calmly put out the fire by herself with one bucket. The stock of wood costs $200, a fortune. It is a huge waste for the owner. 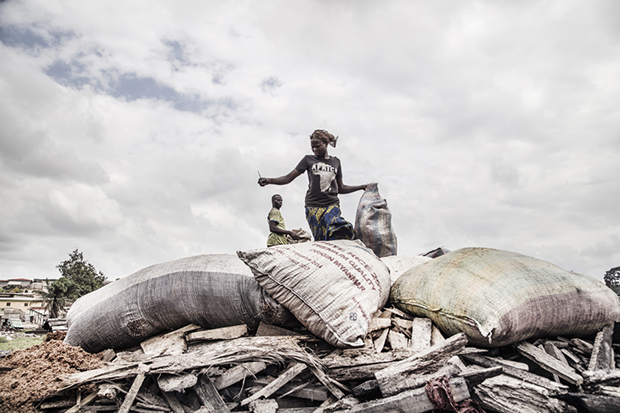 At STBC, a sawmill of San Pedro, A young girl is climbing on top of a big oven to spread some sawdust in order to make the charcoal. This big oven is around 5 meters high. It will take one week for the wood to turn into charcoal. 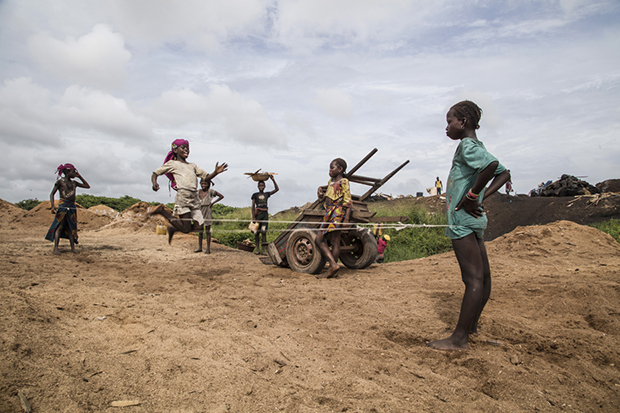 At zone industrielle, San Pedro, girls play together in their workplace. Most girls don’t go to school, and start working with their mothers around the age of 8. 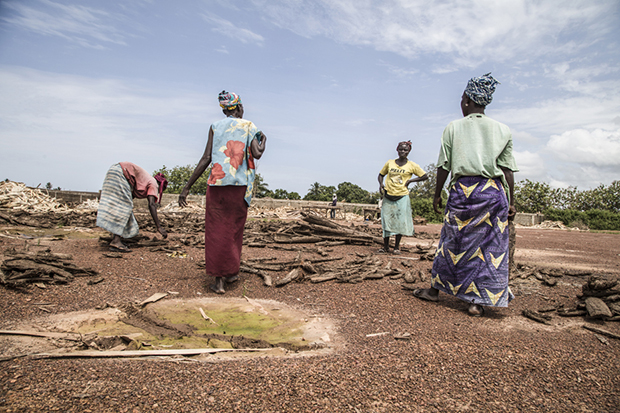 At Zone industrielle, San Pedro : Women working to help each other at different levels. Most of them have relatives in the same field. Granddaughters, Mothers and daughters often share the same oven. To start an oven, they sort the wood collected from Sawmills’ dump areas. 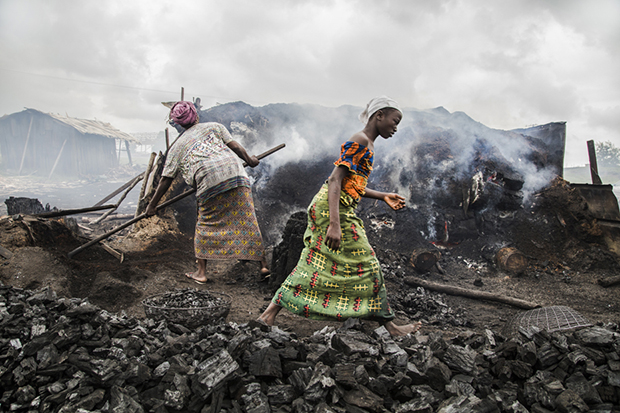 At STBC, a sawmill of San Pedro “Sisi” means smoke in bambara language. It is everywhere. A girl walks barefoot in front of her mother’s big charcoal oven. They lack the appropriate equipment to protect themselves from the smoke, fire and dust at work. 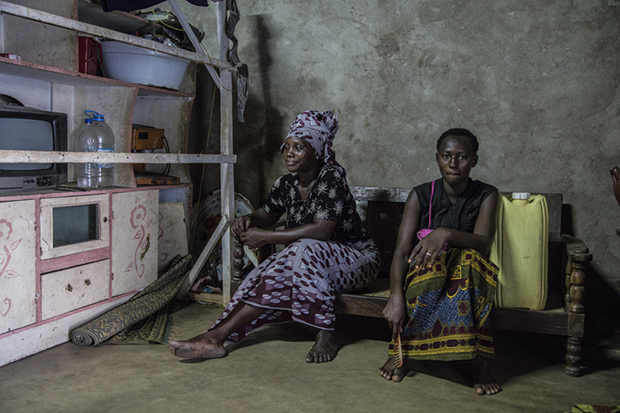 After work in Bardot, a slum of San Pedro. Awa and her niece sitting in their living room. After her husband left her with 5 kids, she started working at the Parc du Pont. She shares a room at her cousin’s compound with her niece. She can’t afford a house of her own. She works all day, every day to send money to her sons.